Miu Miu picks up right where Marc Jacobs left off

It’s an odd feeling to look at a picture of the Miu Miu Patent Ruffle Bag and get a strong sense that you’ve seen the bag (or one like it) somewhere before. Surely a black patent satchel with girlish leather ruffles in pink and purple has to have its own unique place in the luxury handbag market, right? Well, not really.

It took me a while to figure out exactly what this Miu Miu reminded me of, but I finally found it: the Marc Jacobs Vortex Tote. The material is regular leather instead of patent, but the black body topped with pink and purple ruffles is similar enough for my feeble little brain to conflate the two. It’s unlikely that the Miu Miu designers were inspired by the Marc Jacobs bag, but there are enough similarities to give us all a nice reminder that even a very quirky bag probably resembles something else out there on the mass market. There is nothing new under the sun, as they say. 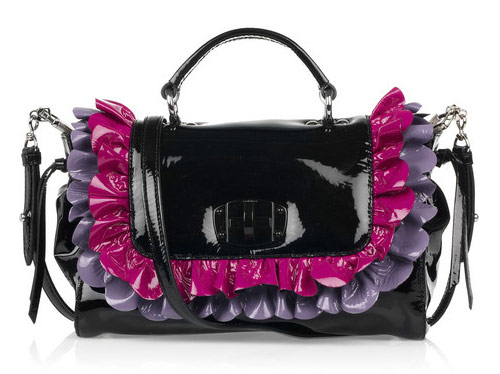 The subject of whether or not I like the bag is a whole ‘nother kettle of fish. I don’t like it as it is in this photo – it looks a bit bloated and busy. Minus the stuffing and the detachable shoulder strap, though, it’s a fun take on the “lady scale” bags that have become so popular this season. Instead of going very proper and feminine with the design, as has been the choice of most designers, Miu Miu went young and girly instead. As a result, their entire Fall collection (and this bag) seems fresh and different. This design may not be practical for the average woman, but I bet we’ll see at least one editor or stylist toting it during Fashion Week. Buy through Net-a-Porter for $1050.

Refresh Your Office Wardrobe with Our Business Attire Approved PicksCelebs Do a 90s Redux with Bags from Louis Vuitton, Marc Jacobs and Saint LaurentLove It or Leave It: New York Mag x Marc Jacobs Tag ToteSee the Best Celeb Bag Picks from Cannes, London and Beyond
Amanda Mull