Michael Kors Knows What We Need: A Front-and-Center Phone Compartment 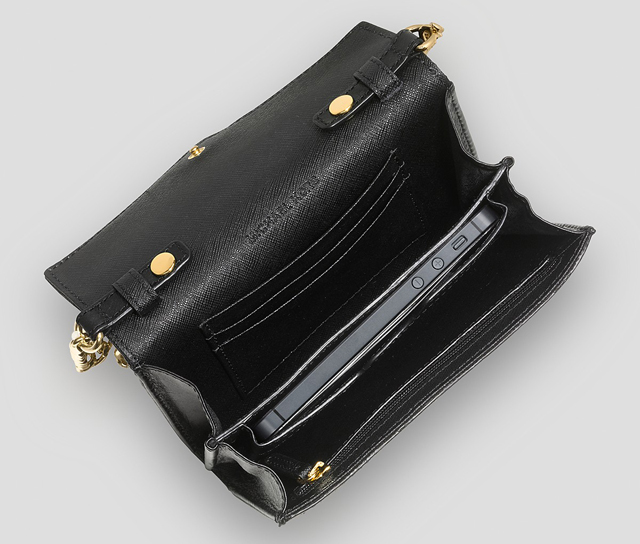 I’m a little embarrassed to say that my iPhone has seen much, much better days because I don’t have a bag like the MICHAEL Michael Kors Phone Compartment Crossbody. Not only do I have a year-and-a-half old 4S (not even a 5!), but its screen is significantly cracked in one corner because of a post-brunch texting incident a couple of months ago in which it met an untimely end against a Third Avenue sidewalk. If those two things weren’t enough, I’ve noticed recently that my screen protector (which I’ve kept in place to keep the glass shards away from my delicate finger meat) has several gouges in it. After some thoughtful deduction, I’ve realized that those gouges are probably because the bag I’m carrying right now doesn’t have any interior pockets and my keys are attacking my phone willy-nilly.

As much as I love bag trends heading toward minimalism, it does present a few problems. My bag came with a separate pouch for all the things you don’t want crashing around in your purse, but I use my phone too much to zip it away completely in a pouch that I would need to fish in and out all the time. Even if a bag has a compartment that’s nominally intended to house a phone, it’s usually tucked away in the unreachable depths of the interior, which is also a dealbreaker for me.

This little MICHAEL Michael Kors bag gets it exactly right – your phone is easily reachable, but it’s also completely protected from everything going on around it. With out-of-pocket iPhones costing in the vicinity of $700, they’re often the most costly thing we carry on a daily basis, other than our bags themselves. It’s always nice when the bag pitches in to keep them safe, especially when the bag is as cute and well-priced as this little leopard number. Buy through Bloomingdale’s for $148. 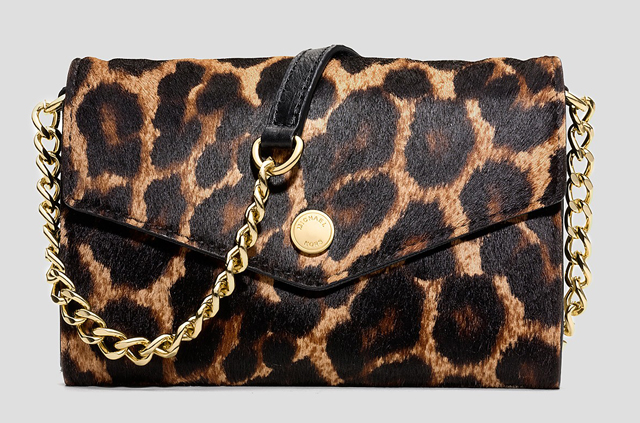 Sweet. I’m often confounded by the lack of separate phone compartments on any bag.

All the little things that make us happy and our lives much easier! 😀

Lovely bag! I always love it when designers come out with fashionable, affordable , and functional bags.

Will a Samsung phone fit?

I have an MK wristlet that my S3 fits into. It’s lovely!

Probably not, unfortunately, unless its close in size to an iPhone.

I am not-so-secretly jealous of all the screen real estate that some of those gargantuan Samsung phones have, though.

No, it’s a lot wider. Bummer! Everything is always made for the iPhones. sigh

I like! Just what I need and I’m loving the leopard print on this. But funny thing, I checked the MK site for this and it’s $178 with free shipping while it’s $148 on Bloomingdale’s website. No biggie though! x

Good idea, but it’s not leather

it’s calf hair, if that counts

What a great idea! I wish more designers would pay attention to what we REALLY carry in our bags. Aesthetics has always been about form PLUS function… not too many designers get it right. So then we resort to those hideous “purse organizers” to keep everything in place, which is what software engineers call a “kludge.” Considering what designer bags cost, it ought not to be this way!

This is a great idea! I normally would not carry MK b/c it seems lots of people
have them. ALthough this I would for a night on the town when I want to leave my higher end bags @ home and not take them out on the town!

Cheap classical Michael Kors Bags on sale, Big Discount, free shipping on all orders, if you want to save money look at my name ^ ^