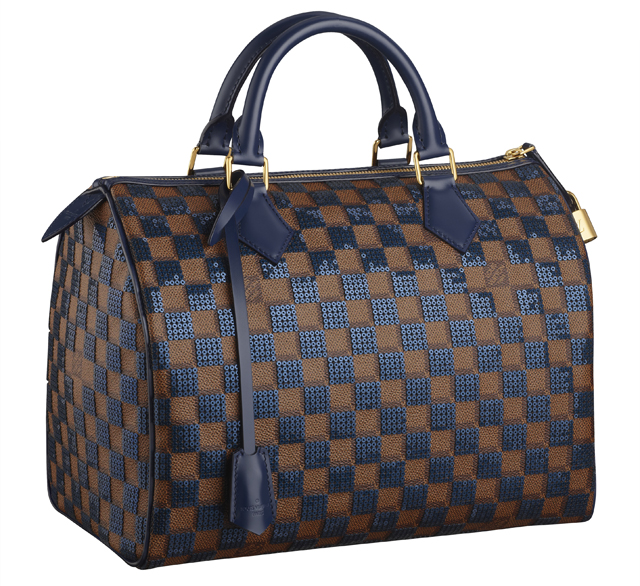 We’ve talked about Louis Vuitton, the business, quite a bit lately, so we thought it might be a nice change of pace to consider, for a moment, Louis Vuitton, the bags. Although the company is in the middle of a strategy change, the bags that are beloved by millions are still there, still being updated and embellished in clever ways to satisfying the ceaseless churn of fashion. For Pre-Fall 2013, that willingness to play on classics has yielded the Louis Vuitton Speedy Damier Paillettes.

The bag comes in a black-and-brown version, below, that mimics the traditional Damier Ebene fabric, but I’m feeling particularly partial to the navy embellishment that you see above. Navy is going to be a huge trend for fall, but it’s slightly under the radar now, and this kind of slightly sparkly nod to the look is a perfect way to experiment. The navy leather handles and clochette are also a nice touch, and as always, a big advantage Damier is that the trim isn’t vachetta and won’t wear as obviously as it does on the monogram bags. (I personally like how the vachetta wears, but my opinion on that subject is far from universally held.)

These bags likely won’t inspire love from people who think Vuitton’s signature moves are getting old, but the brand has a wide, ardent base of customers who love designs exactly like this one. Personally, I think all bag lovers need at least one Speedy in their collections, and for some of you, this one might be it. When Pre-Fall 2013 bags hit stores soon, you’ll be able to pick this one up for $2,360 via Louis Vuitton. For now, you can shop the brand via its official website. 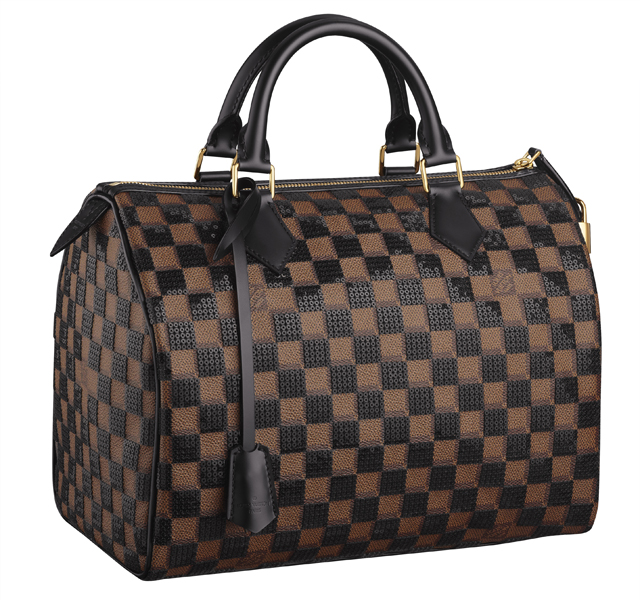 I don’t own a Speedy because I like to be hands-free, and it doesn’t have a shoulder strap. But between the combination of brown and navy with the sequins, I could be convinced.

you can buy speedy’s with a shoulder strap attached or you can always buy a seperate strap and attach when needed (WARNING: can cause the bag to warp if you use it alot this way)

I sort of love these bags and I rarely love LV.

The Speedy is definitely overplayed but I always love when they put out modified versions like this, especially the navy version.

it also comes in a burgundy colour!!

I *love* the blue one. I’m not in a place where I’d spend that much on a bag right now, but I can see myself trolling ebay.

Love the navy, I am not even a fan of the checkered damier, but this…I likey!

I have this in the black! It is absolutely GORGEOUS in person!! I purchased it at the LV store in Oak Brook, IL. The salesperson said stores only received one, that only 200 or so were released! I’ve been looking for it online to learn more- thanks for blog post!!