Can a homemade Hermes stand next to the real deal? 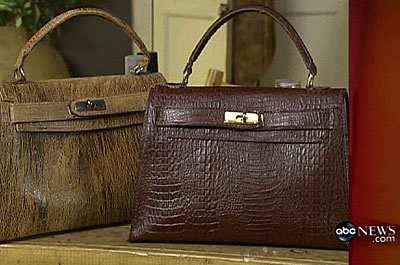 There has been an interesting discussion taking part on Purse Forum on a news clip. ABC popped into Hermes on Madison Avenue in NYC and spoke with the Hermes-god-placed-on-Earth himself, Claude Gandrille. I was shocked to see Claude on ABC speaking about Hermes, as the brand is so secretive and keeps mum about their happenings. Furthermore Claude is rather quiet himself, typically found diligently working in his back right corner of the shop. But they got an interview with Claude. Somehow a slew of video cameras came into Hermes as well, when a simple movement of your camera phone on any other day will send the security upon you in less than 10 seconds.

Next ABC decided to enlist Michelle, a do it yourself artisan, to create a Hermes Kelly for $35. She did so by using the Hermes Kelly pattern found on the Hermes website (we created our own Hermes a while back). Michelle spent two days creating a Hermes Kelly that was made to resemble a classic Kelly and a Crocodile Kelly. Afterward she hit the streets to see if people could spot the real bag. They could. Better yet, she went to Hermes to see what the sale associates and Claude thought. Are you kidding me – I nearly fell off my chair at this point trying to hold in my anticipation of their reactions. The sale associates laughed and tried to tell her it was good. Claude was dying on the inside, though on the outside he held it together and told her “This is wonderful”. Claude was lying, I know it.

What gets me is after this piece, the ABC anchor goes on to say you can get that ‘blueprint’ on Hermes and try it yourself. So let’s make more wannabes and give more counterfeiters the idea. Not that the design would have stumped anyone who knew handbags. Obviously the quality was about a millionth of what a true Hermes bag is. And that cracked, dry tree-bark pattern on the ‘crocodile’ Kelly Michelle made was heinous. Either way we enjoyed the video because we got to see Claude; Vlad and I love Claude! And we did not take it too seriously, it was just for fun anyhow.

What do you think?