Prediction: Return of the Luella Gisele 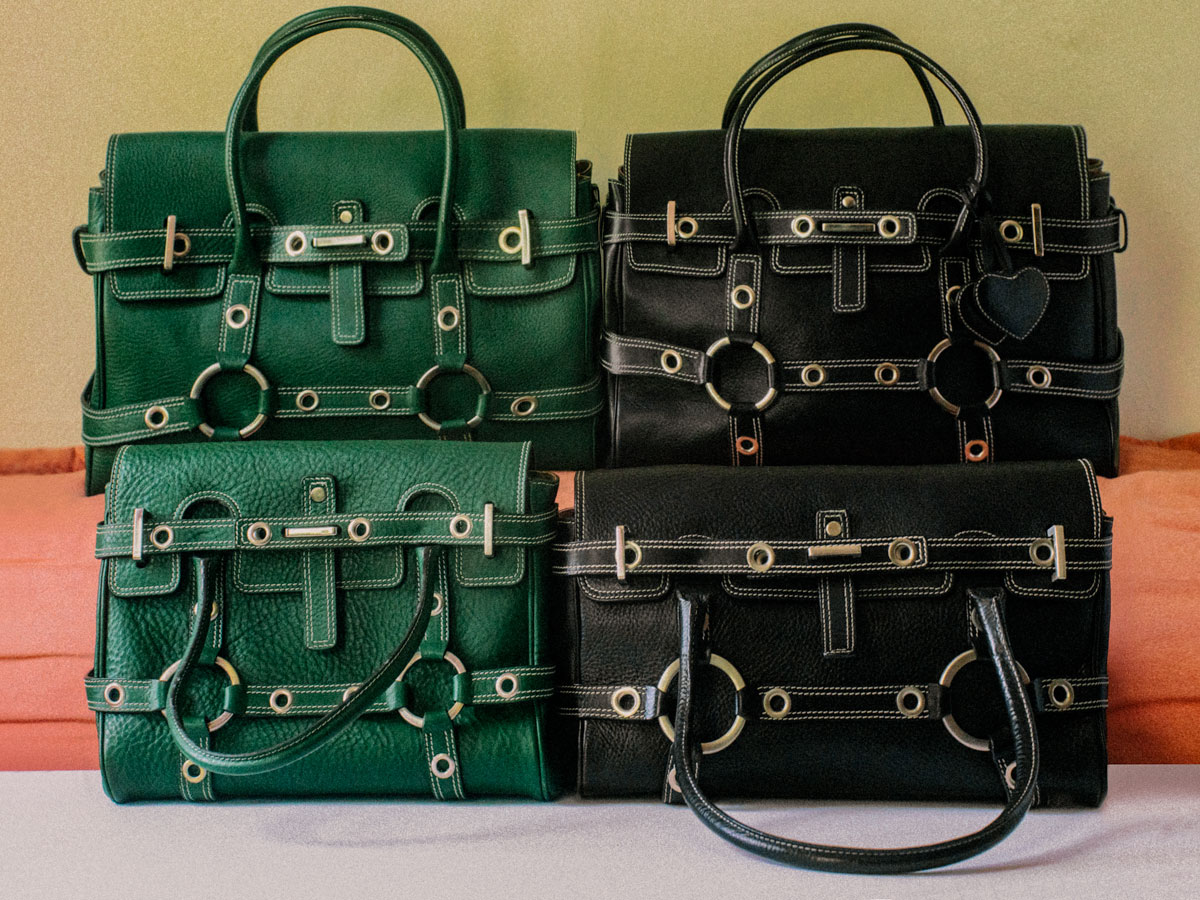 Love her? Hate her? Maybe you don’t even remember her, but no one can deny that the Luella Gisele was one of the It-Bags of the early 2000s. Often seen on the arm of celebrities, including Gisele Bunchen herself, it seemed as though the bag was on a path to earn itself a permanent spot in the hands of collectors everywhere.

Originally designed by Luella Bartley in collaboration with Mulberry (pre Roxanne) the bag was simply named the “Luella” when it first debuted. The bag originally launched in two sizes, and in two colors – black or brown. Despite its popularity the bag was only available for a limited time, but it was enough to help pave the way for Bartley’s own brand. This collaboration led to Bartley receiving an investment and a global licensing agreement for her own ready-to-wear and accessories label. The bag was then renamed the “Gisele” by the press (as she was the one carrying it in the Mulberry show) and was available in a wide variety of colors and renditions.

In a quote Bartley gave to the Guardian she explains, “The press went ballistic and the bag became known as the Gisele—I didn’t plan it. I actually had to write to her and apologize, explain I wasn’t using her name, it just happened. Though I think if I were a model, I’d be quite pleased to have a bag named after me”. It retailed for about $600 back then, which would come out to be roughly $1,000 today, because believe it or not this bag is officially vintage. Unfortunately, after the 2008 recession the brand had to close its doors, leaving the Gisele to fade into fashion obscurity.

Personally I was a little too young to remember back then so clearly. I wasn’t yet into bags like I am today, but I remember seeing photos of the bag slung on the arms of celebs in magazines, and look-a-likes filling the shelves at all the pre-teen shops at the local mall. Now thinking back to it, my friend even had a tiny plastic knock off for her lip smackers and sour Altoids (which I miss so much). Maybe I’m feeling a bit nostalgic, especially with all things early 2000s coming back around. I thought to myself that owning this bag would be a fun way to lean into the trend while also indulging my inner handbag collector. I also love having a mission, after all nothing matches the thrill of the hunt right?

Lately I’ve been spot on about predicting handbag comebacks, and so far I’ve successfully predicted the return of the Fendi Baguette, Dior Saddle, Gucci Jackie, Mulberry Alexa and Roxanne, and Prada Tessuto. Some may argue that some of these bags never fell out of favor but resale trends, and my experience as a luxury SA say otherwise. As a matter of fact I remember when the Fendi Mama and Dior Saddle bags were on eBay in the low $200-$300 range!

But as we all know fashion is very cyclical, and having a big interest in vintage fashion has helped me to see what era designers pull from. And as the early 2000s are rolling back in I’m seeing Von Dutch, chunky colorful platform sandals, and rhinestone baby tees all over my feed. Even the beauty scene is leaning into it, with extra sticky lip glosses and funky colorful liners being advertised to me by all the big cosmetic brands. If all these things are coming back into trend isn’t it just a matter of time for the Luella Gisele? 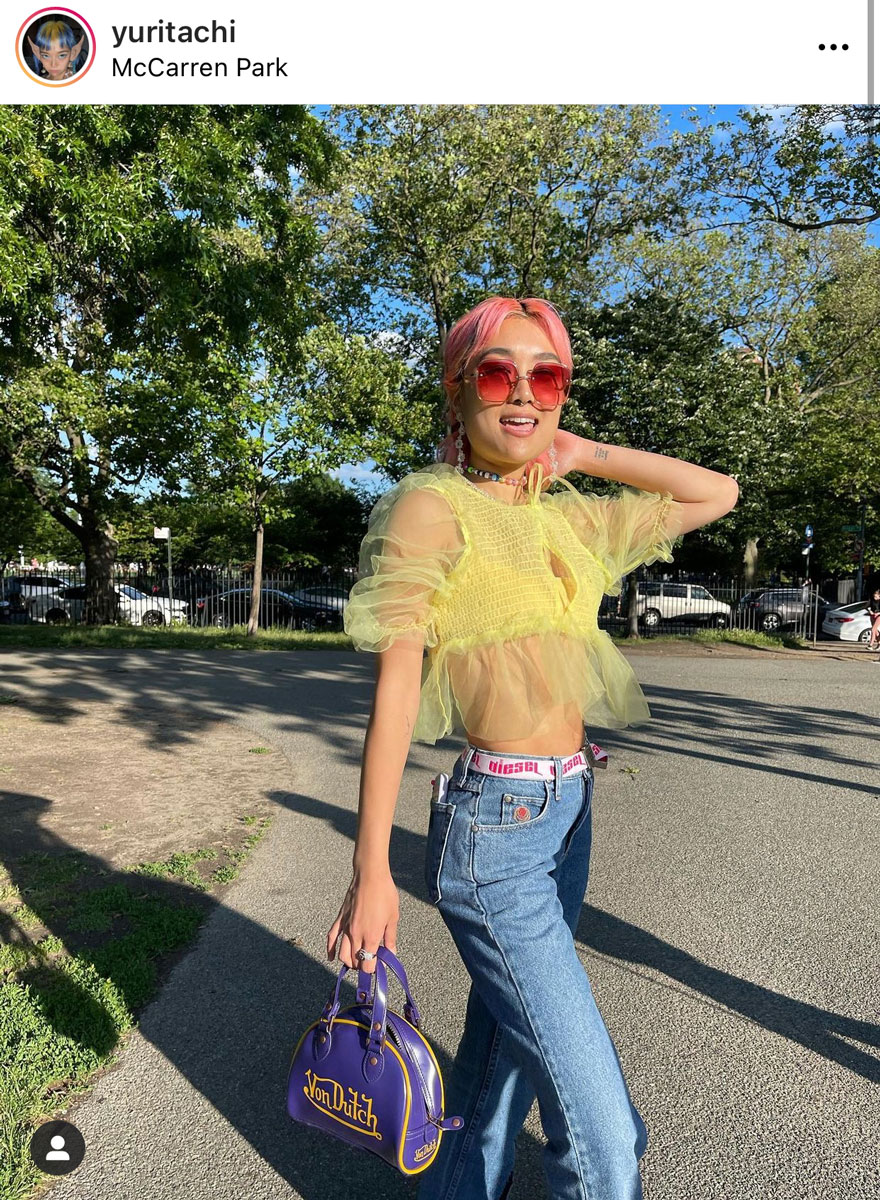 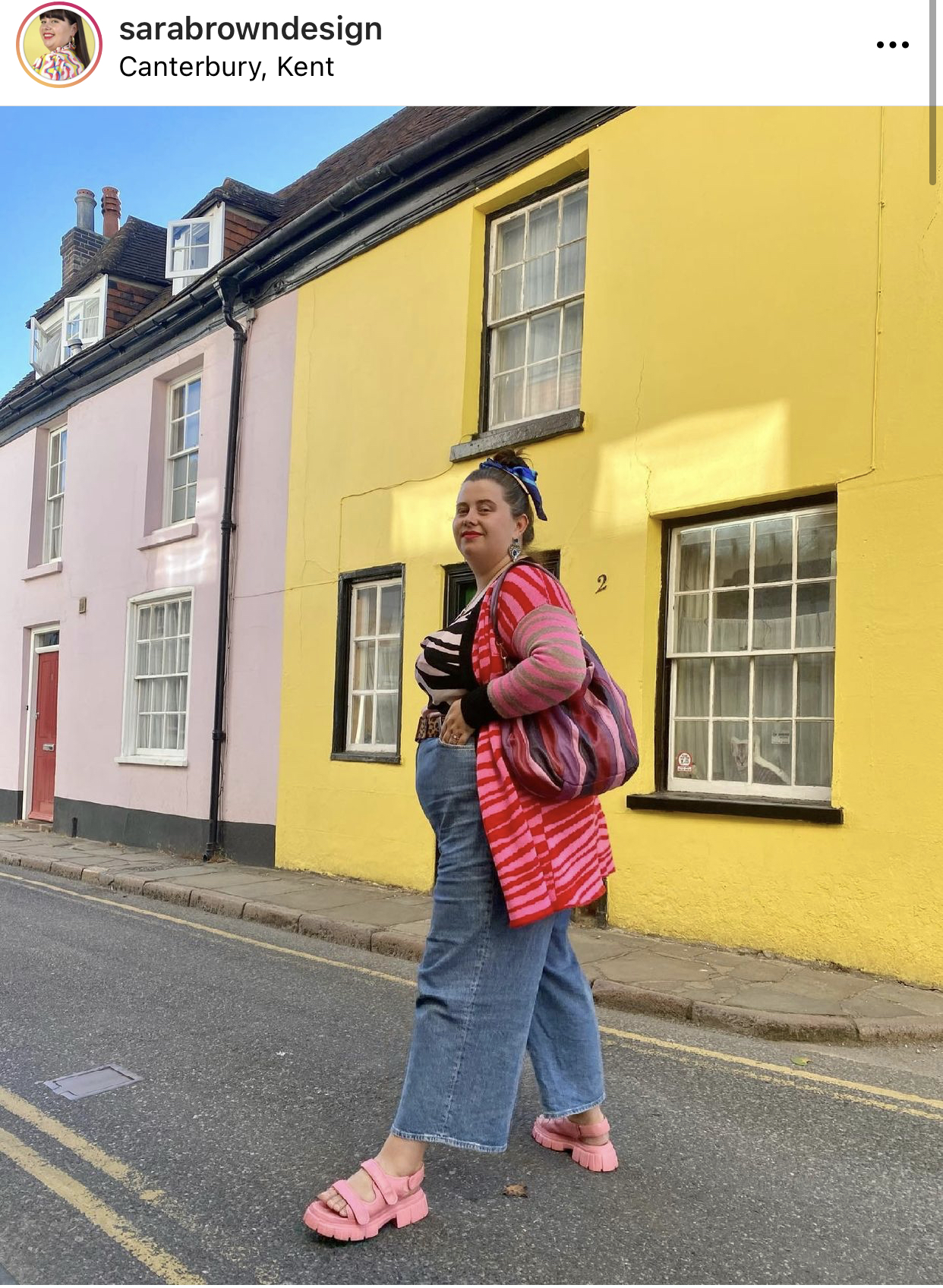 Above are two of my favorite Instagram fashion icons taken fresh off my feed with their permission. Left: Yuri Tachi (@yuritachi) in a vintage Von Dutch Bag, Right: Sara Brown (@sarabrowndesign) in Chunky Pink Platform sandals and a Prada throwback.

Another motivating factor for grabbing the bag was their price point, as you can easily score one of these babies for a very good deal if you look in the right places. For example I purchased each of my Luella bags for about $40 (special thank you to my parents for driving an hour away to pick one of them up for me in CA), except for the large black one which I spent about $70 for with shipping because she was brand spanking new and in perfect condition. But with that being said, I have noticed that just within the last couple of months since I’ve been poking around the web for them the prices have slowly begun to creep up and the bags going for under $100 in good condition are getting snapped up quickly.

Suddenly the abundant options I thought I had ended up quickly dwindling which lead me to believe that now was the time to strike. It turns out I may not be the only one foreseeing this bag’s possible revival. Most of my bags were purchased on Poshmark which I have a love/hate relationship with. Some came with a little more wear and damage then anticipated, which tends to be the case with Poshmark in my experience. Though considering I got the bags for a steal and that they were going faster than expected, I took up the opportunity to put some of my old restoration skills to use. 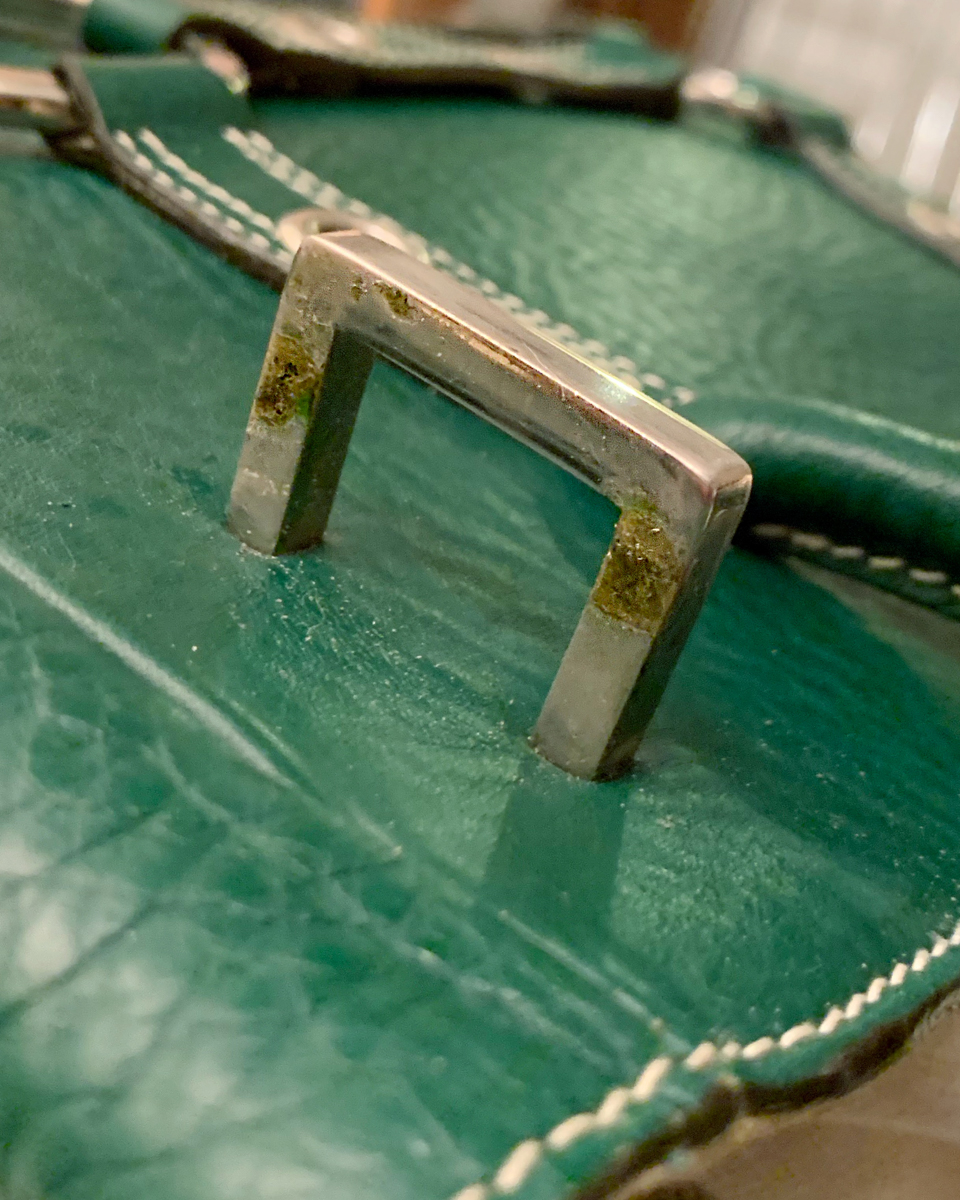 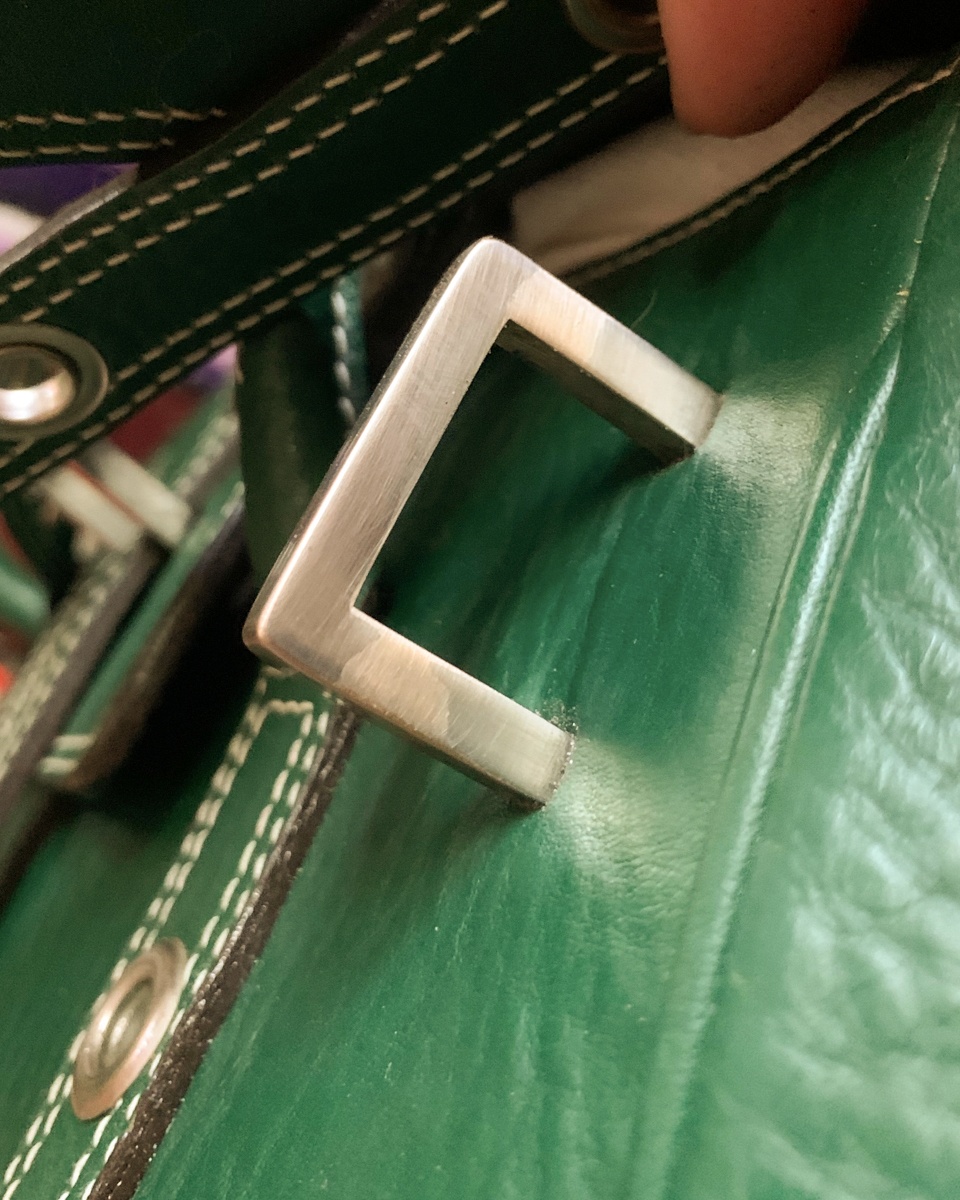 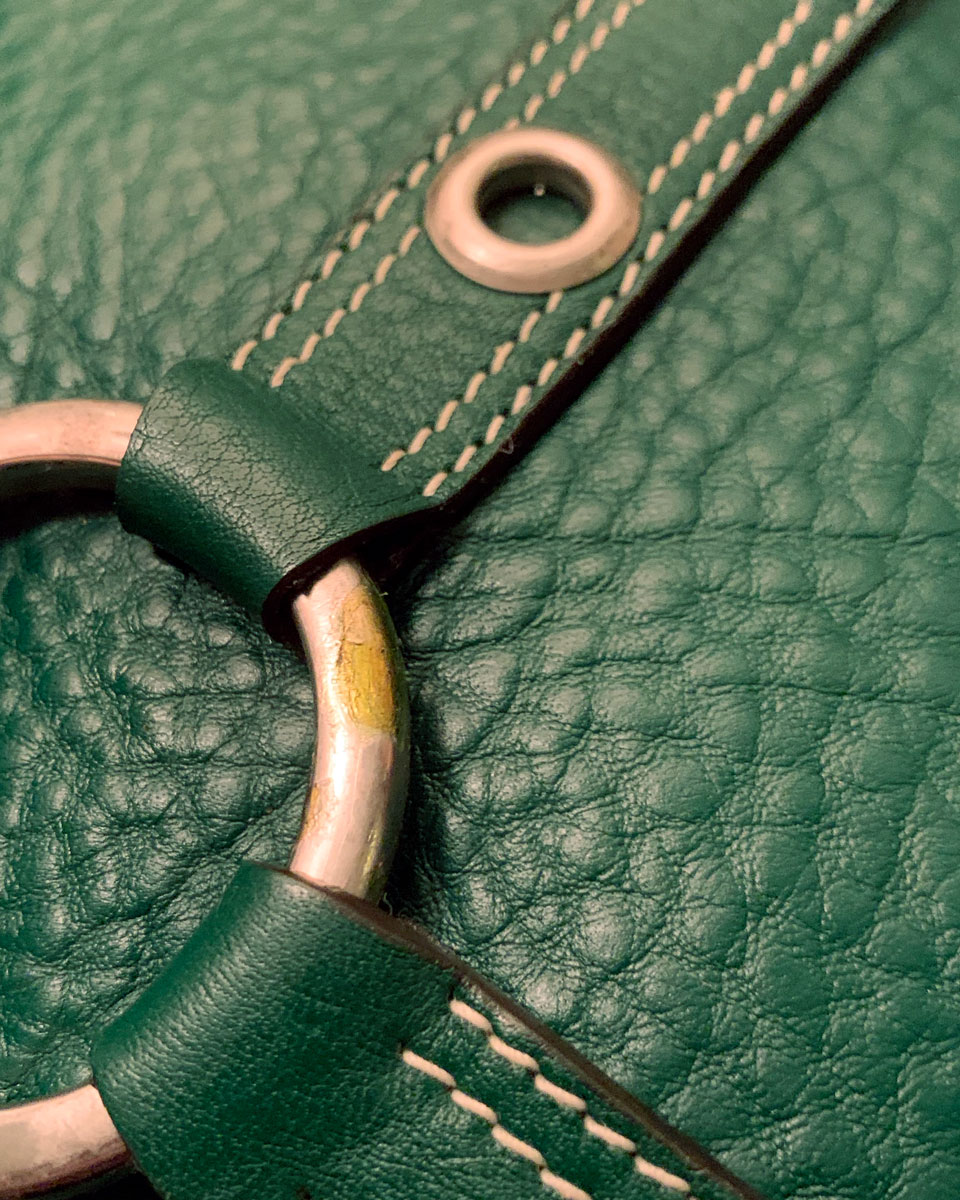 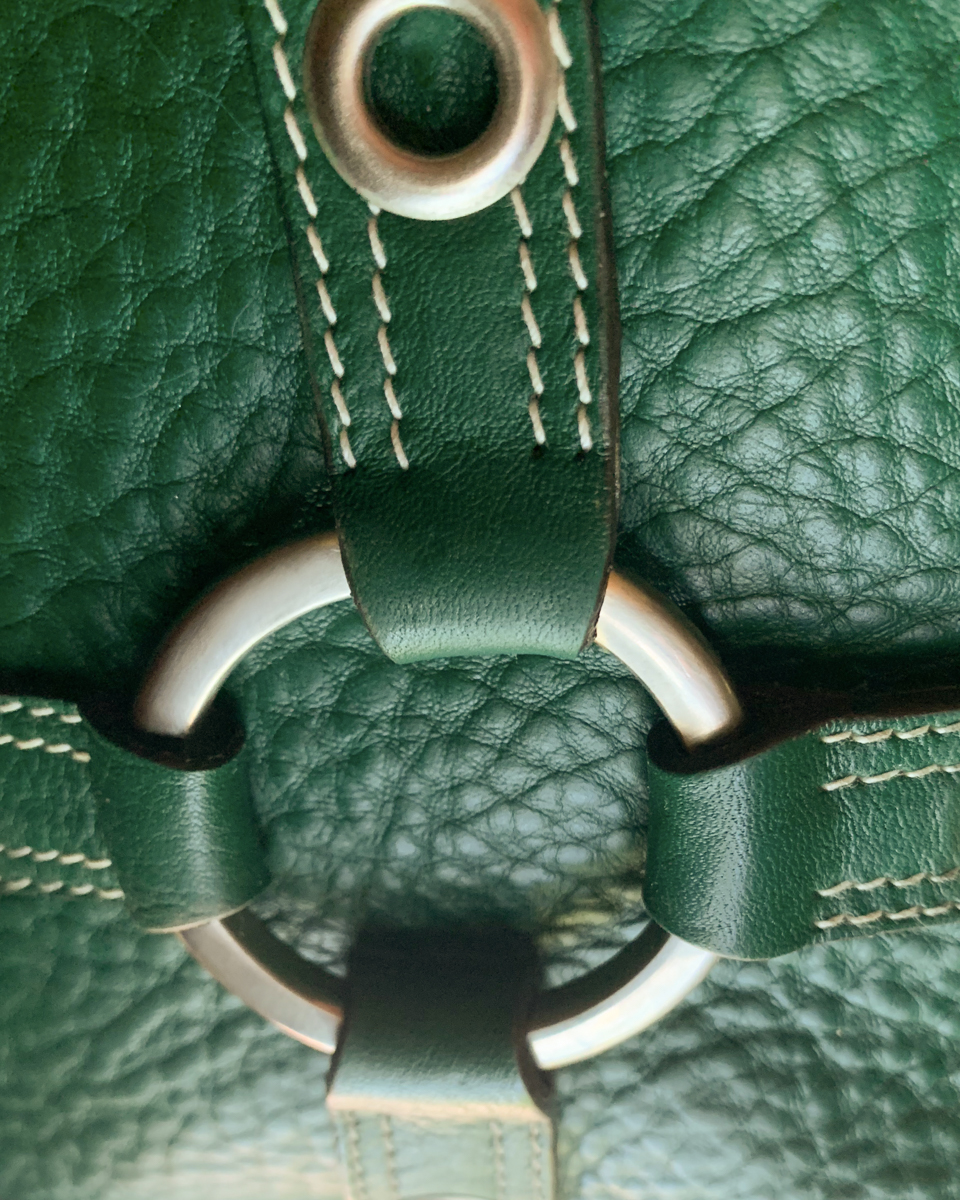 Since most of these bags are twenty years old or close to it, it’s not uncommon to see color discoloration and light scratching. This was easily fixed with a few rounds of conditioning with Collonil Leather Gel. In general I would say the leather is really solid, it has a large pebbly grain and is incredibly thick but prone to drying out quickly. Even now I’m still working on getting these bags back into shape, periodically moisturizing them until their shine and feel is resorted. If this is a bag you’re considering purchasing I definitely recommend getting a bottle (or two) of Collonil to help perk your bags up as it is doing wonders on mine.

Another common issue with these bags is the hardware getting dull and spotted over time. Also three out of four of my bags had a weird mystery goo on the rivets that was incredibly stubborn, and a challenge to remove to say the least. I also wanted to be cautious when it came to polishes and metal cleaners, as I wasn’t certain about the hardware’s metal contents and didn’t want to cause any permanent damage and replacing the hardware would be difficult. I tried hot soap and water, peroxide, diluted alcohol, vinegar, baking soda, lemon juice, and even ketchup with no success. Clearly being gentle was not an option.

Tired, frustrated, and equally as stubborn, I said “If you’re not going to play nice, neither am I” and grabbed my nail kit. Yes, that’s right, I spoke out loud to my bag, are we surprised? No not really. So I proceeded to chip off the big chunks of goo with a cuticle pusher, grinded away the remaining goo with a nail file, and then buffed the tarnish away with a four sided nail buffer. Just make sure if you go down this route to be careful not to scratch up the surface of the leather, and keep in mind I am very comfortable and have lots of experience toying around with bags. 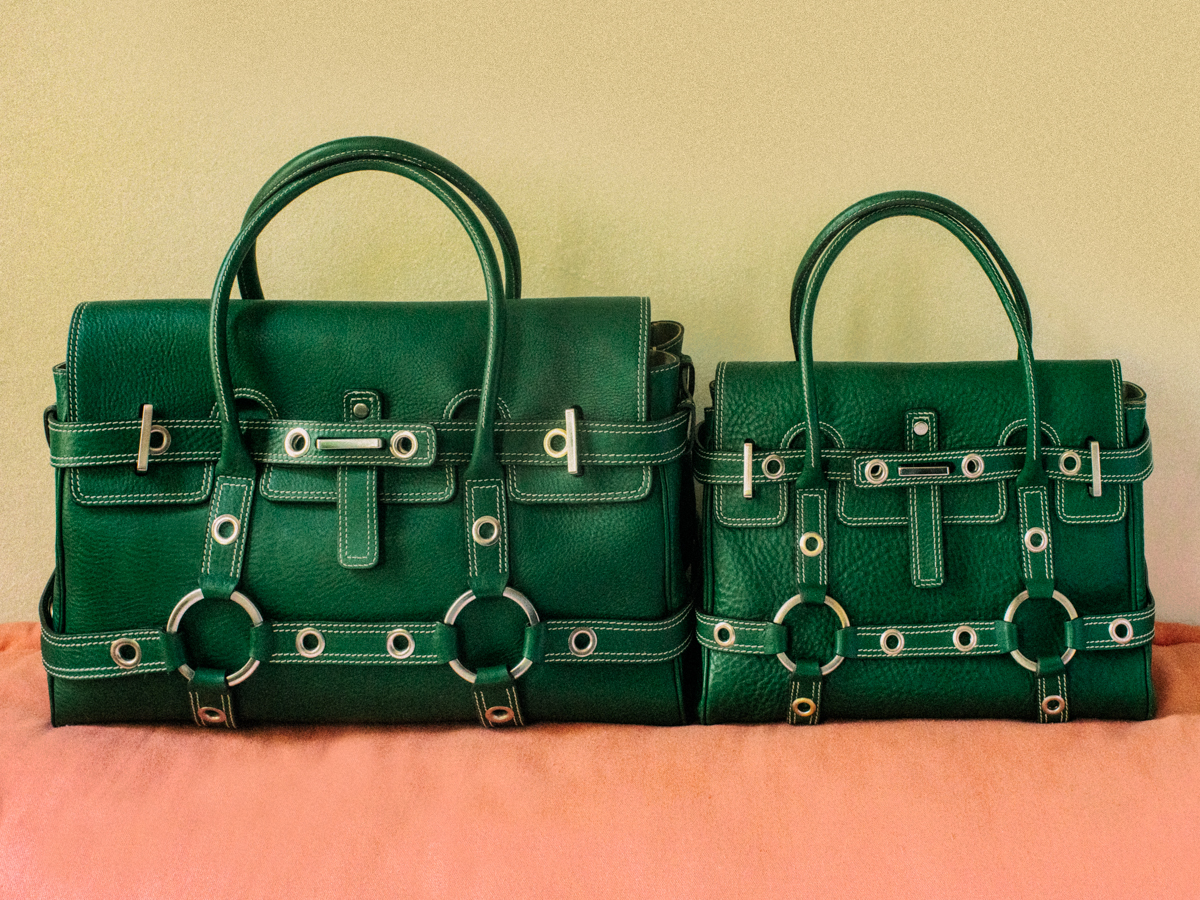 Now let’s talk about the bag itself! The leather’s smell is absolutely amazing, especially considering these bags are almost twenty years old. It’s a relatively stiff leather so it maintains its shape well, but it’s not so stiff that the leather feels fake or cardboard like. All four of my bags are in incredible shape after some TLC, and I think a lot of that has to do with the heartiness of the leather, but it’s a double edged sword as the bag is incredibly heavy. To put it in perspective each of them are heavier than my Birkin 35. I think part of that is, of course, all the metal, but also just the leather itself is dense.

The bags are beautifully made, the leather is high quality with a nice big grain making the bag pretty scratch resistant (though the bag will show more marks when dried out) and I definitely feel no need to baby them whatsoever. The lining is made of fabric with two pockets that are super handy for smaller bits like my keys and passport. The large size fits my 17″ MacBook Pro with enough room for the charger, a hard drive, and all of my other daily carries and could be used as a carryall or overnight bag no problem. Personally I think the medium is the perfect size for everyday and I am currently on the hunt for a good deal on a mini.

I’ve listed the dimensions and some size references below: 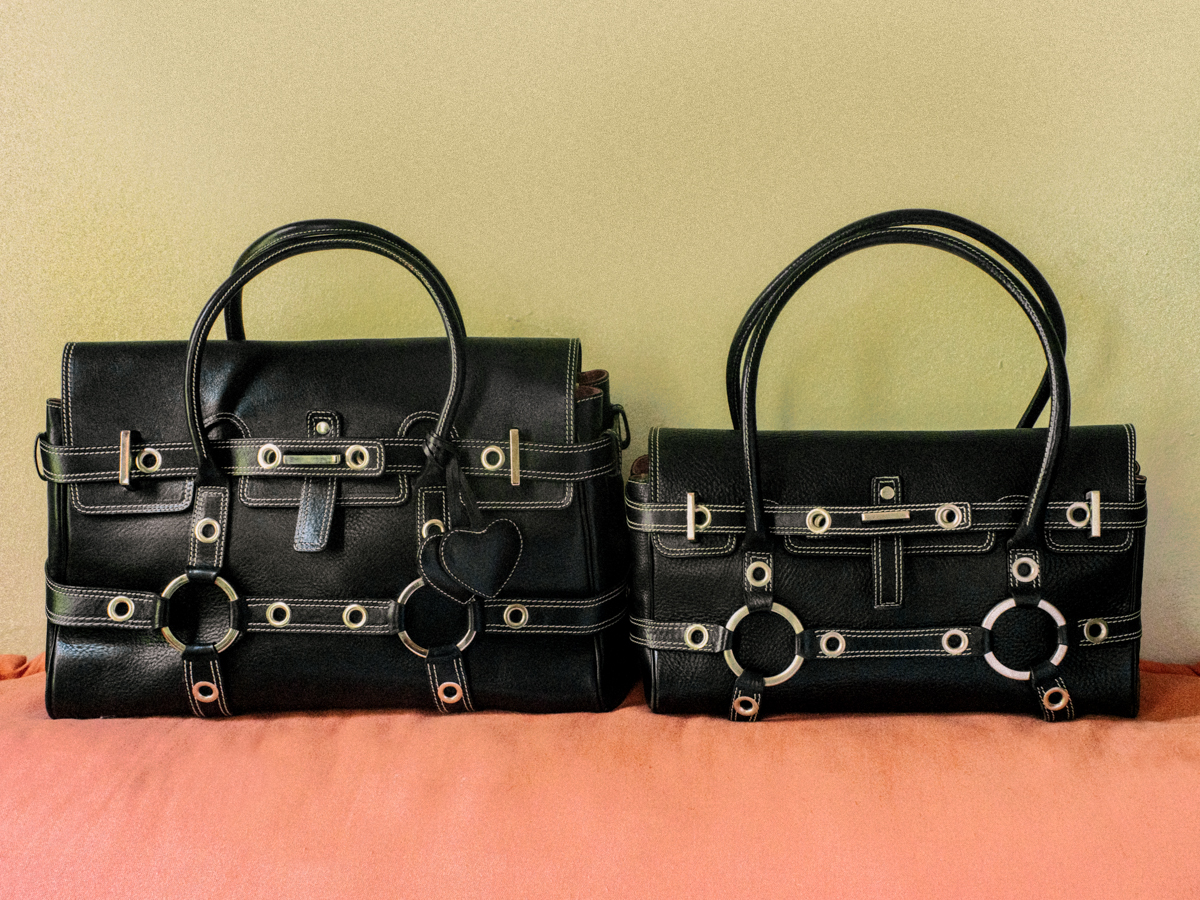 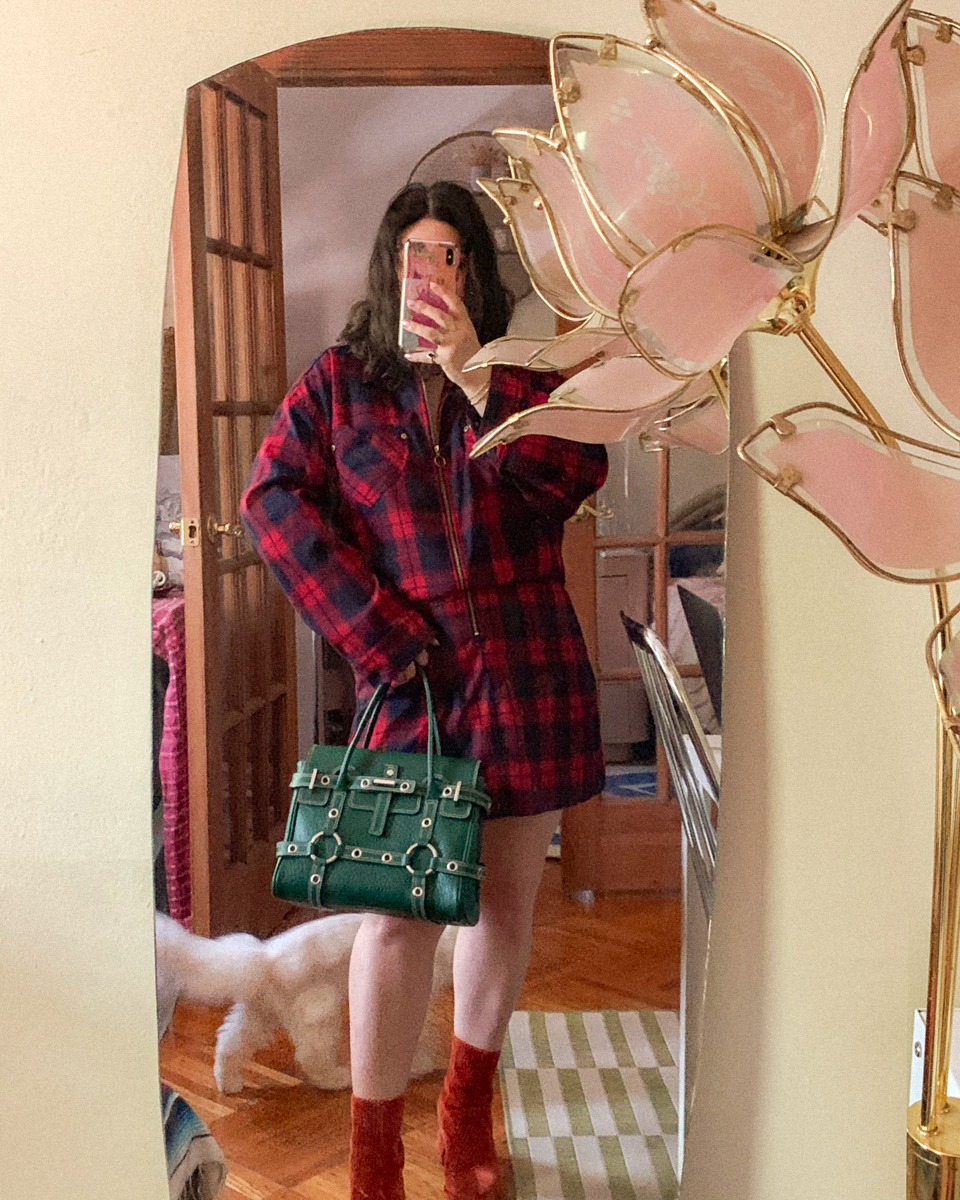 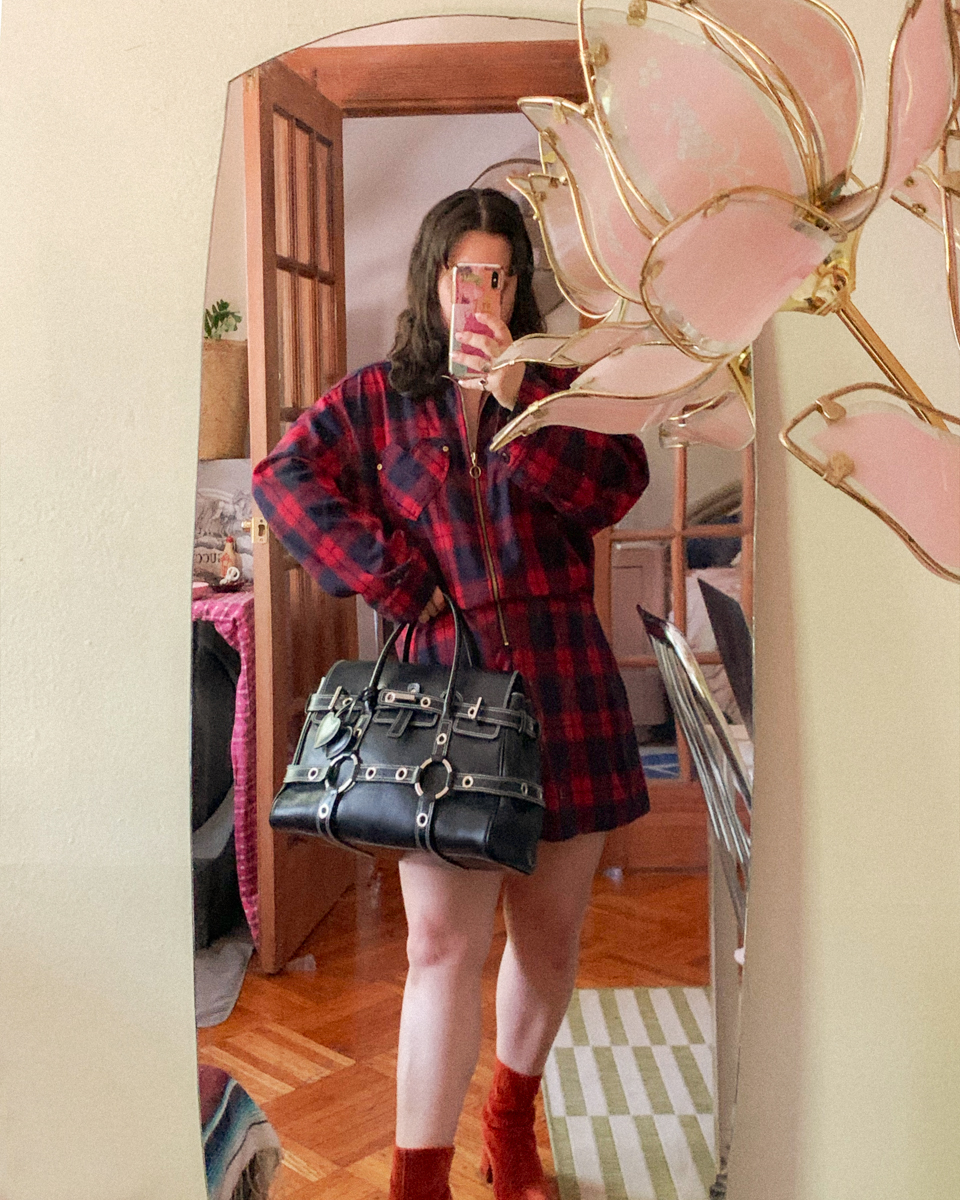 I won’t lie this bag has been super fun to write about and research, and even more fun to carry and style. There is something so special about owning a little bit of handbag history, even if it was for just a short moment in time. I hope to see this bag come back in soon, the quality is excellent and it has a way of catching eyes and compliments. A friend of mine even described it as a “kinky horse bag”, which made me laugh. Personally I tend to enjoy bags that don’t take themselves too seriously and I think Luella Bartley was great at making fashion fun. The fall of the Luella Gisele definitely marked the end of an era but perhaps we’ll see her in the spotlight again soon…

Jess is a Brooklyn based Photographer and Art Director, who’s been collecting handbags for over ten years. A Southern California native, she received her BFA from Art Center College of Design before moving to New York for her Master’s from The School of Visual Arts. Her experience as a creative within the fashion industry, along with her background in retail and resale, have allowed her to cultivate a unique insider perspective. Her personal collection consists of playful takes on classic silhouettes, as well as unconventional modern pieces. With a passion for vintage, cats, and all things sci-fi, she expresses herself best through personal style.