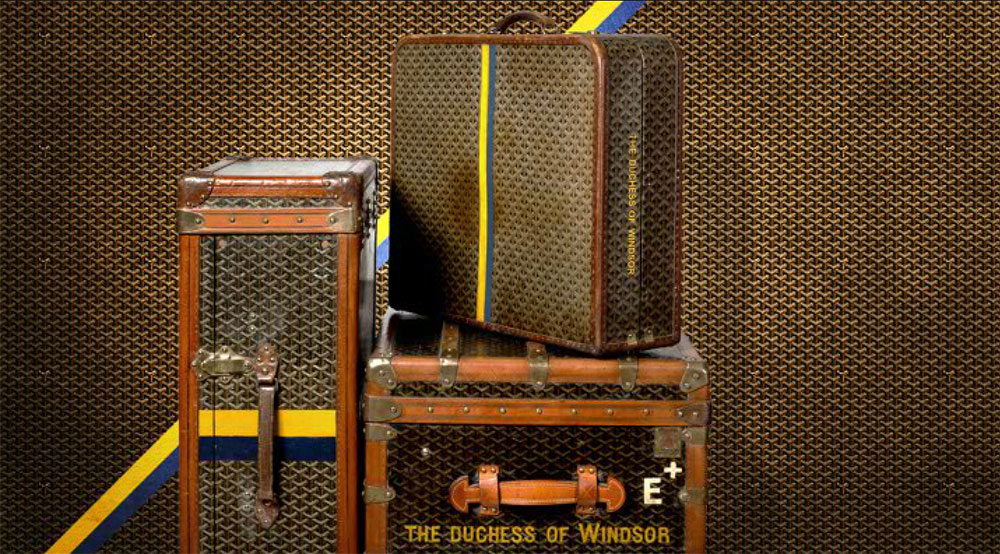 All luxury brands preach about their rarity and exclusivity, but few of them have the nerve to be elusive and discreet in any of the numerous ways that Goyard has been for centuries. The brand doesn't advertise, list products on its website or speak to the media, and you'll never see a splashy Goyard product launch or fashion week party. Goyard doesn't want to attempt the extremely common fashion industry balancing act of claiming its products are rare and precious and still trying to sell $300 cardholders to every person on Earth; the brand would simply rather not sell the cardholders.

That sort of public relations austerity can make Goyard hard to pin down for shoppers new to the handbag market, or even experienced bag collectors who are simply looking to Goyard for the first time. To set you up with the basics, we've created a guide to what you need to know about the brand as a company. Once you're ready to shop, check out our primer on the brand's most in-demand design, the Goyard St. Louis Tote.

[Editor's Note: This post was originally published on December 13, 2016]

1. Goyard is the oldest leather goods maker still in business.

The company was founded in Paris in 1853, just one year ahead of the more widely known Louis Vuitton. The house's existence under the name Maison Martin (after founder Pierre-François Martin) dates back to 1792, but François Goyard purchased the company (which was by then called Maison Morel) from Martin's successor and renamed it in 1853.

Goyard's monogram print is probably the most recognizable thing about the brand, and unlike most designers, it doesn't use its first initial to structure the pattern. Instead, the interlocking Ys of Goyardine (the brand's signature coated fabric) are the name's central letter, and the piled dots that construct it are a symbol of the Goyard family history as log-drivers. 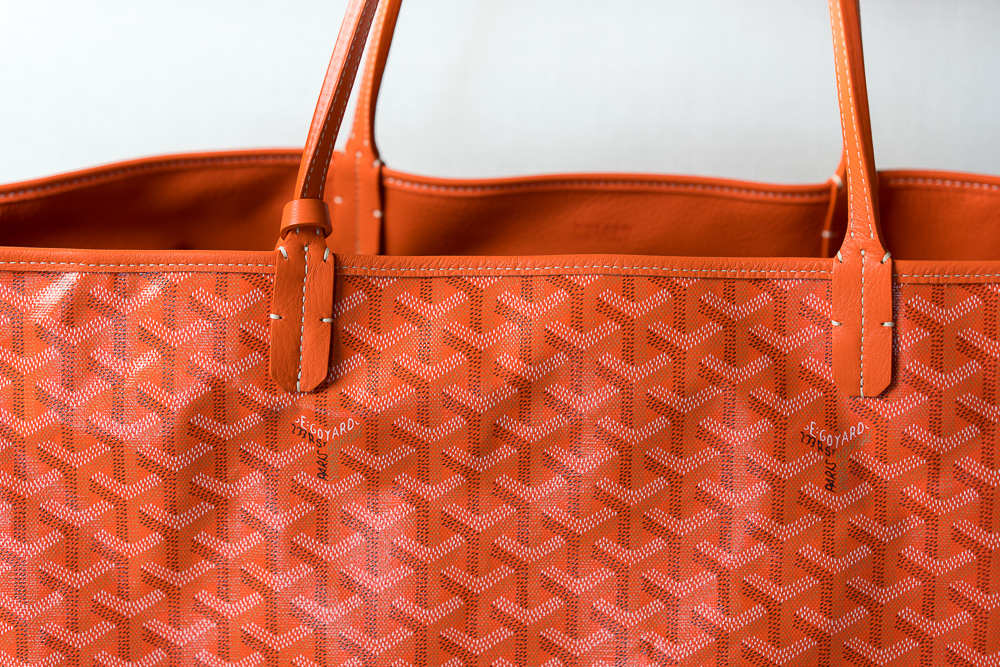 3. Goyardine is no longer hand-painted, but personalizations are.

Back in the day, Goyard's signature print was hand-applied to all the coated canvas used to make the brand's bags. Now that process is achieved through mechanized etching and layering of dye, but personalizations (which require an extra fee) are still hand-painted by a Goyard artisan in one of the house's handful of global ateliers: Beverly Hills, New York, Mexico, Tokyo, Hong Kong, Brazil or Carcassone, France. 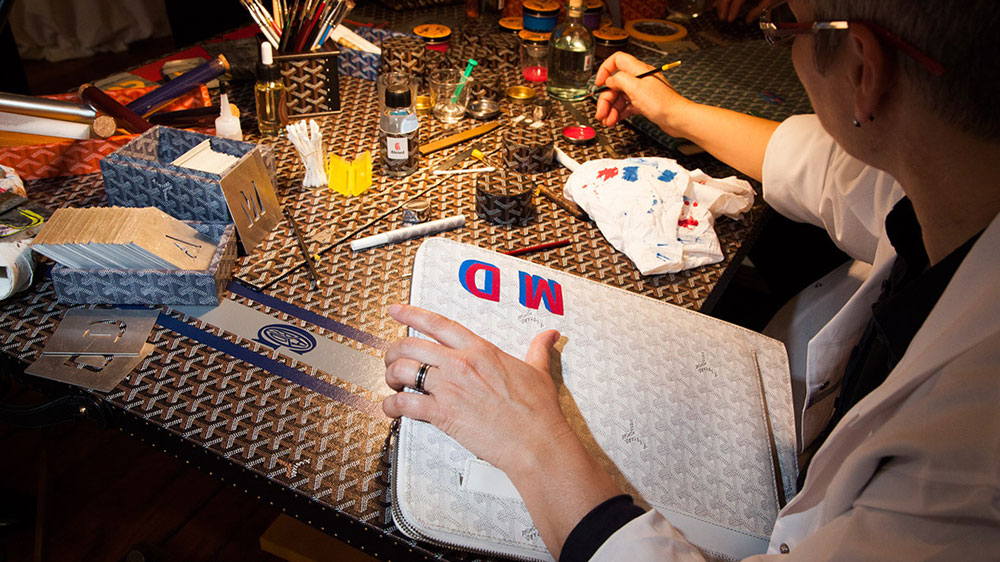 4. Goyard is the only major luxury brand that doesn't sell anything online.

Seriously, nothing. The brand only has four product categories--travel goods, men's and women's handbags and accessories, pet accessories and special orders--and none of that is available for purchase on your computer, either from the brand itself or from authorized third party retailers, like department stores. 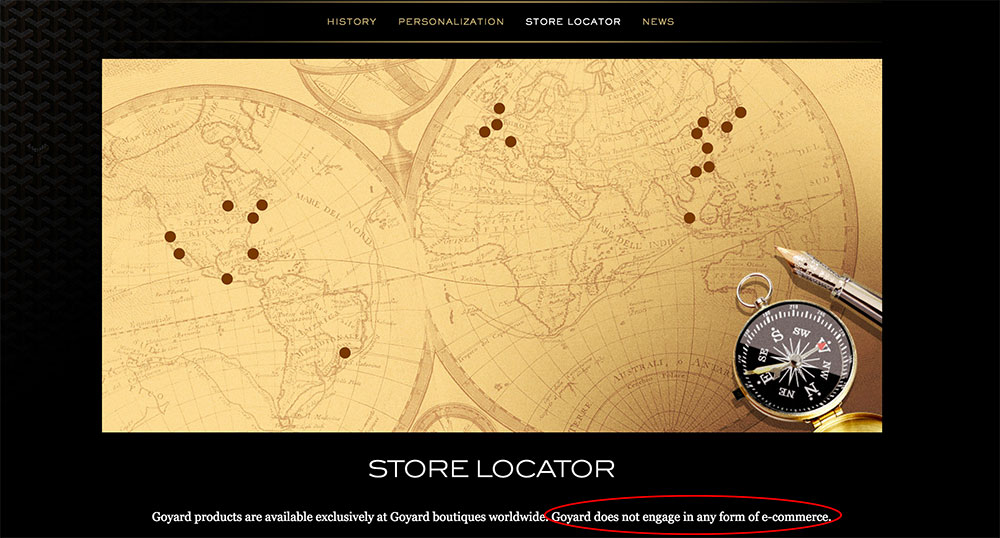 5. Goyard also doesn't make it super easy to buy its products in person.

Until 2015, the only standalone Goyard boutique in America was in San Francisco. There's now one in New York, but with those two and a couple of store-in-store boutiques at Bergdorf Goodman and Barneys, there are fewer than half a dozen places to buy Goyard in person in the United States. By contrast, Hermès has 24 US locations and Louis Vuitton has 108, and both sell significant portions of their product lineups on their websites. 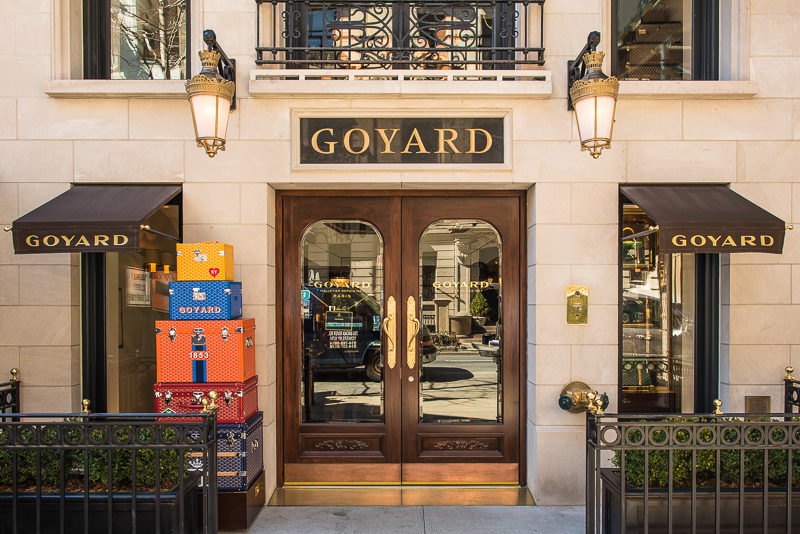 6. As you might have surmised, Goyard is maybe the most notoriously reclusive brand in the ever-democratizing luxury handbag landscape.

The brand rarely grants interviews to press outlets either print or digital, although it did invite us into its East 63rd Street flagship in New York City to photograph the store before it opened to the public. Goyard is still privately owned, which means it lacks the board of directors and shareholders that push most brands to scrounge endlessly for new customers and new products to entice them. The brand seems mostly interested in satisfying its existing clientele which, of course, has its own sort of draw for luxury consumers hungry for exclusivity. 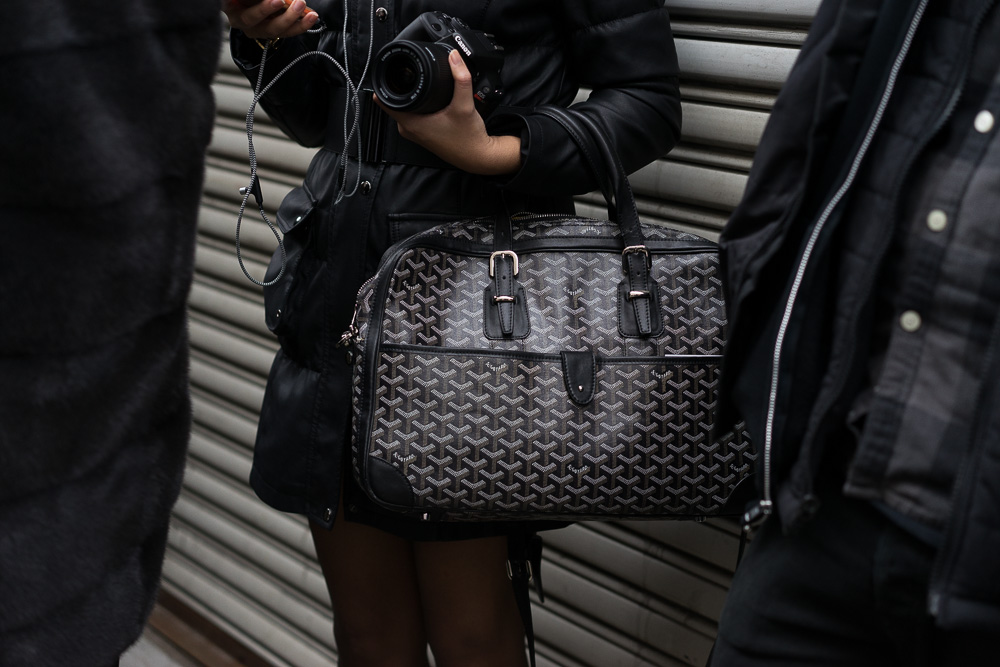 7. Goyard does occasionally answer consumer questions on social media, though.

Now we have a definitive answer about Goyard fanny packs, and earlier this year, the brand weighed in on the authenticity of a Goyard jacket DJ Khaled wore to perform a the VMAs. First Goyard proclaimed it fake, but then softened that proclamation to simply "unofficial"--the brand doesn't make jackets, but it does make silk scarves, which Khaled bought in order to have the jacket custom-made. 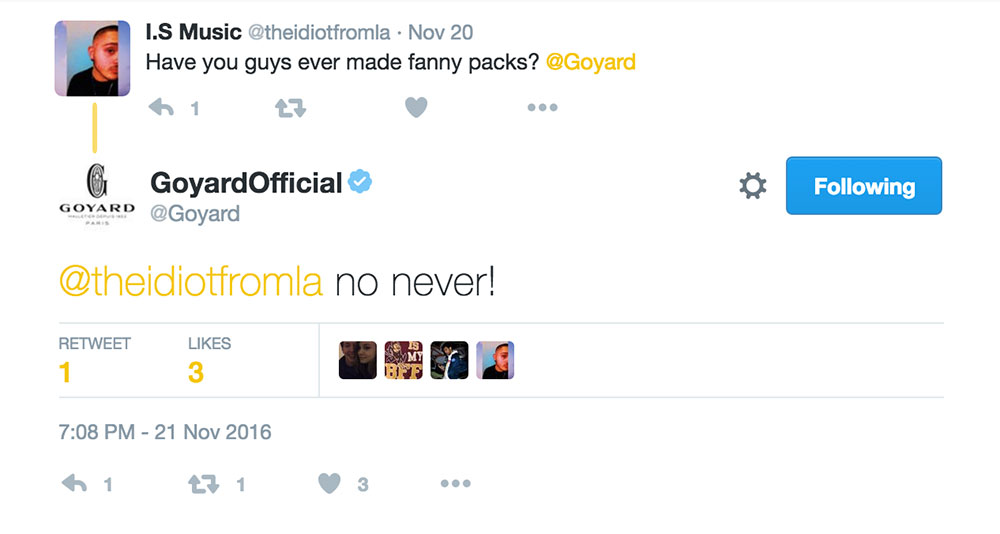 8. There's a book about Goyard's history, but you have to go to Paris and make an appointment to view it.

Only 233 copies (a reference to 233 Rue Saint-Honoré, the address of the brand's Paris headquarters) of the extremely limited-edition Goyard book were printed, and copies came with their own storage trunks. The book is no longer available, of course, but if you wish to view it, that can be done via an appointment at the brand's French flagship.

9. Goyard will let you special order pretty much anything.

The request has to be up to the company's standards for its own products, of course, but if you've got the imagination and the bank account to back it up, Goyard's special order workshop can make trunks and travel pieces in just about any configuration or concept. Perhaps the most famous example is a trunk that turned into a portable writer's desk, which Goyard made for Sherlock Holmes creator Sir Arthur Conan Doyle. 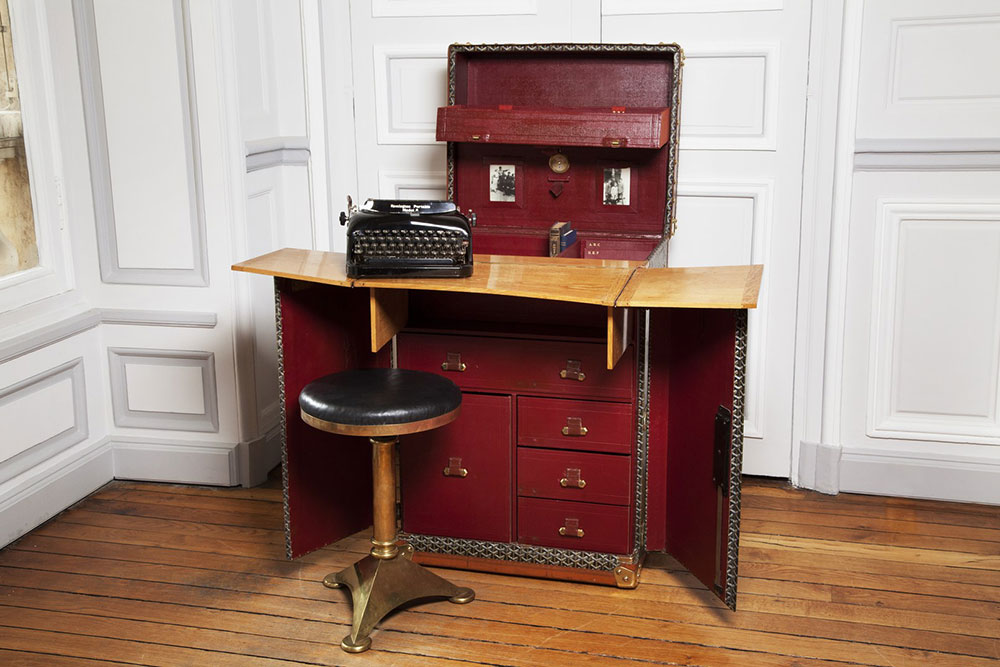 10. Not much has changed at Goyard in the past several decades.

The biggest recent changes I could find were some differences in the availability of certain colors of Goyardine. The brand prides itself on consistency and discretion, and unlike most fashion houses that pay lip service to those values while doing relatively little to demonstrate them, Goyard walks the walk by sticking with its excellent, tightly edited product assortment, abundant personalization services and subtle public image. That makes for a genuinely unique shopping experiment in today's luxury leather market, which is exactly what its clients are looking for. 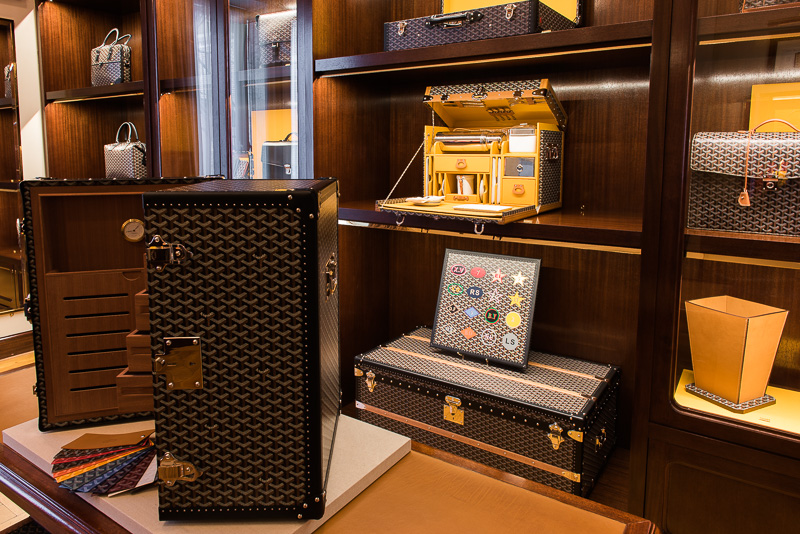