Labor Day, a crossbody bag and the silliest tan line I’ve ever had 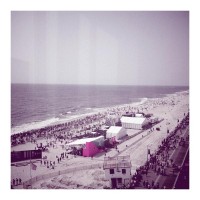 I should start by saying that I’m not a tanner. I’m naturally very fair and have no desire to change that, and even if I did, the desire to engage in the sort of extended outdoor activity that creates a tan is also not really in my wheelhouse. Among the reasons that I chose to move to New York is that I’m comfortable having only a casual relationship with things like grass and trees.

That being said, I put on my best maxi dress and headed to watch the QuickSilver Pro New York surf competition on Long Island with some friends this past weekend, because who can turn down a trip to the beach on the last weekend of summer? Of all outdoor places, the beach has always been my favorite. But since I’m not much of a weekend warrior, my preparations for a day outside were…insufficient. For the next six months, everyone’s going to be able to tell what kind of handbag I carried this weekend.

I could have sworn I bought a bottle of sunscreen at the beginning of summer. If I did, I have no idea what I did with it, but I couldn’t find it on Sunday morning when I was scrambling to make it to Penn Station on time. (Mornings, like the outdoors, are another thing to which I’m ill-suited.) “That’s fine,” I thought. “New York is full of drug stores! I’ll go to the Duane Reade next to my subway stop.” Except, naturally, that’s the only Duane Reade I’ve ever encountered that’s not open 24 hours. I went into the K-Mart at Penn Station, but inexplicably, it only sold clothes. It’s been a minute since I’ve been inside a K-Mart, but most of them sell toiletries, right?

And so that’s how I ended up on Long Beach with no sunscreen, a strapless maxi dress and a crossbody purse. I managed to stay inside or shaded most of the day, but my skin is very fair and total coverage is impossible at the beach. Surveying the damage the day after, one thing is very apparent: Don’t wear a crossbody bag when you’re going to be outside all day. Perhaps those of you who are more acquainted with such activities learned this long ago, but I now have a stripe of pale skin running diagonally across my sunburnt chest.

So ladies, take note. It might be too late in the season to prevent your own crossbody-related problems, but it’s never too early to prepare for next summer. A backpack, a tote bag, one of those big things made out of woven hard plastic that has to be carried be hand – almost any bag you can think of will lead to less sunburn embarrassment than a crossbody at the beach. Learn from my mistakes, because my tans fade slowly and I’ll have my stripe for six months. Although I suppose that if anyone were to be semi-permanently marked by her handbags, it’s appropriate that it was me. As far as I can tell, my problem can only be solved by wearing that same bag every day to fill the gap, but luckily, I have it in two colors.