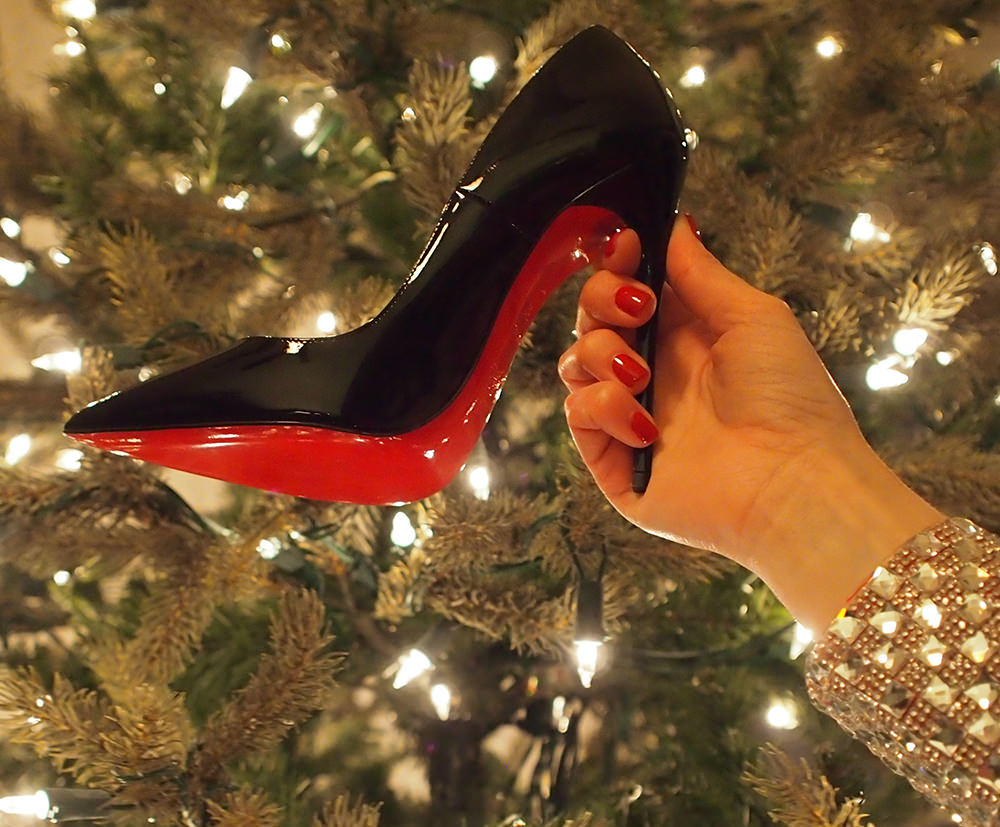 Christian Louboutin‘s red sole is iconic. While most luxury shoppers can recognize this distinct shade of red a mile away, the color actually started with nail polish, and now it’s become a polish once again.

In 1993, Christian Louboutin was working on the Pensée shoe, which was inspired by Andy Warhol’s “Flowers.” After its completion, Louboutin felt something was off, and what happened next is what has made him such a legend. Louboutin’s assistant Sarah was painting her nails red in the studio, and the designer borrowed her red polish to paint the new design’s soles. An icon was born.

When the designer decided it was time to take his brand into the beauty market, it’s no surprise that a red nail polish seemed like the only way to start.

I went to down to Saks on the day of the Rouge Louboutin release, and I even toyed with the idea of buying this covetable polish for myself. Finally, I decided to make the purchase and do a little experiment that puts this luxury polish to the test, and here’s how it ranked in our TalkShoes Testimonials: 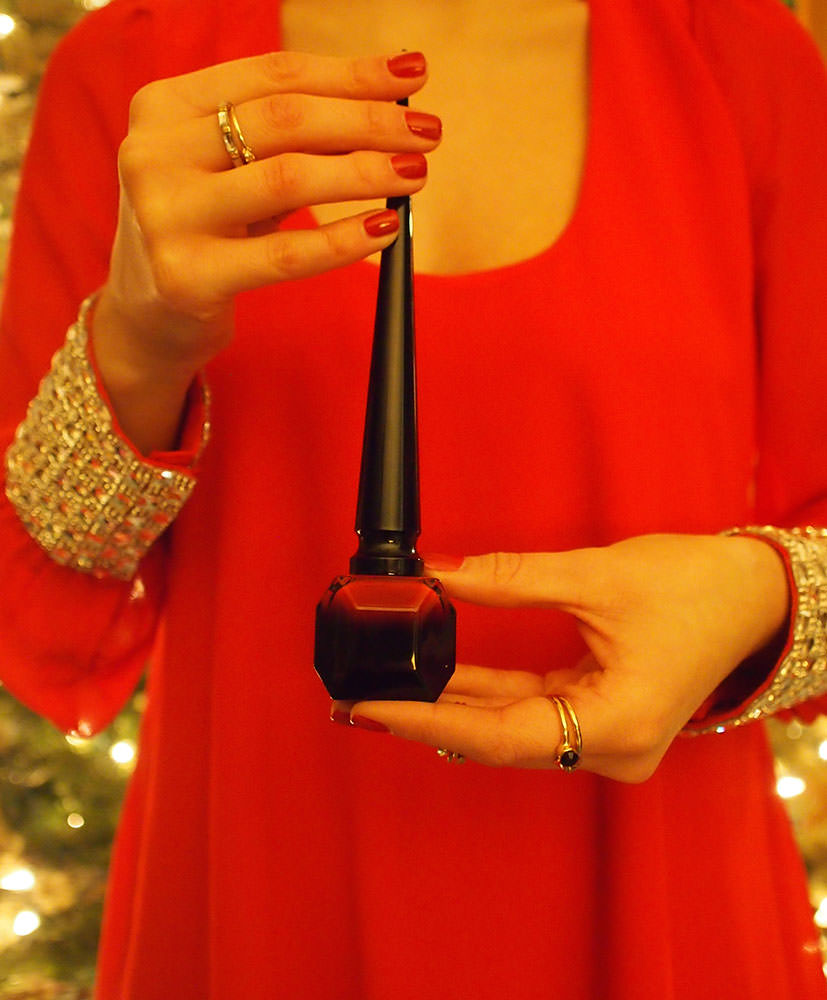 For this category, it made most sense to base this final score on both the aesthetics of the polish as well as the bottle.

Bottle: This distinct and architectural bottle mimics what the Louboutin brand stands for: sexiness taken to its logical extreme. The Rouge Louboutin Cap stands at eight inches to match the brand’s highest heel ever, the Ballerina Ultima, which was created in 2007. The bottle is just as unique as the color inside, with its two-tone ombré glass and multi-faceted shape. This bottle is utterly gorgeous and is unlike any other in your collection, guaranteed.

Polish: Normally I don’t like red on my fingernails. I’m very pale, so a vivid red against my pale complexion never appealed to me. When I decided to test one of the Louboutin shades, though,I knew I would regret not trying the signature red, and I’m glad I made that choice. This color was bright against my complexion, but it wasn’t overpowering in the way that other red nail colors often are. It’s a true red with no hidden under tones.

I was told upon purchasing that this was the most highly pigmented nail polish on the market, and the sales representative explained that two coats of this polish is equivalent to 20 layers of regular nail lacquer. After I applied the first coat onto my nails, I was able to tell instantly that this polish was more dense than any other polish I’ve tried or owned.

Now for the big question: did it chip? No matter how fancy it is, this is still nail polish, so yes, it chipped. I noticed the initial chip after the fourth day. I was able to wear this color for a little over a week before the chips became very noticeable. Aside from the chips, what I loved most about this polish was the long-lasting shine. Normally, after a manicure. the initial shine fades away after a day or so. This Rouge Louboutin shade held its shine for over a week, which made it look as if I was wearing a gel manicure.

I thought the removal process for this vibrant shade was going to be difficult, but I was pleasantly surprised. This color wasn’t hard to remove and didn’t stain any of my nails. A win, overall. 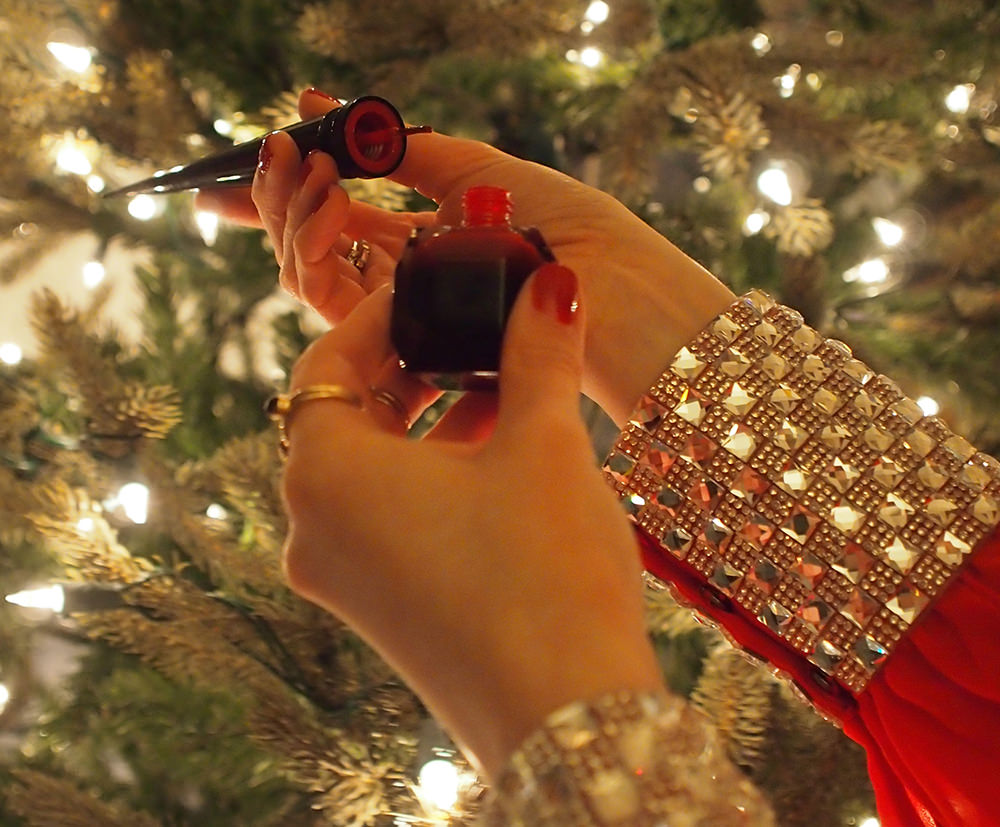 One of the standout aspects of this nail polish is the elongated cap. Even though you may not be used to painting your nails with a cap like this, it’s reminiscent of a calligraphy pen and holding the cap felt very natural. You are able to grasp this stem as if you were holding a pen, which gave me maximum control when painting, and I even noticed that I made few mistakes. Another perk of this polish: because of its dense formula, no air bubbles formed, which is a problem I notice occasionally with other nail polishes.

This polish also features a triangular brush, which is an under-hyped element of its packaging because it definitely made application easier. I noticed that I was able to to get a more accurate application near my cuticles, which is definitely one of my problem areas when I’m doing a DIY manicure. Between the long cap and the thick formula, this color looks flawless. Even if you aren’t the best at doing your own nails, this Louboutin lacquer has got you covered. 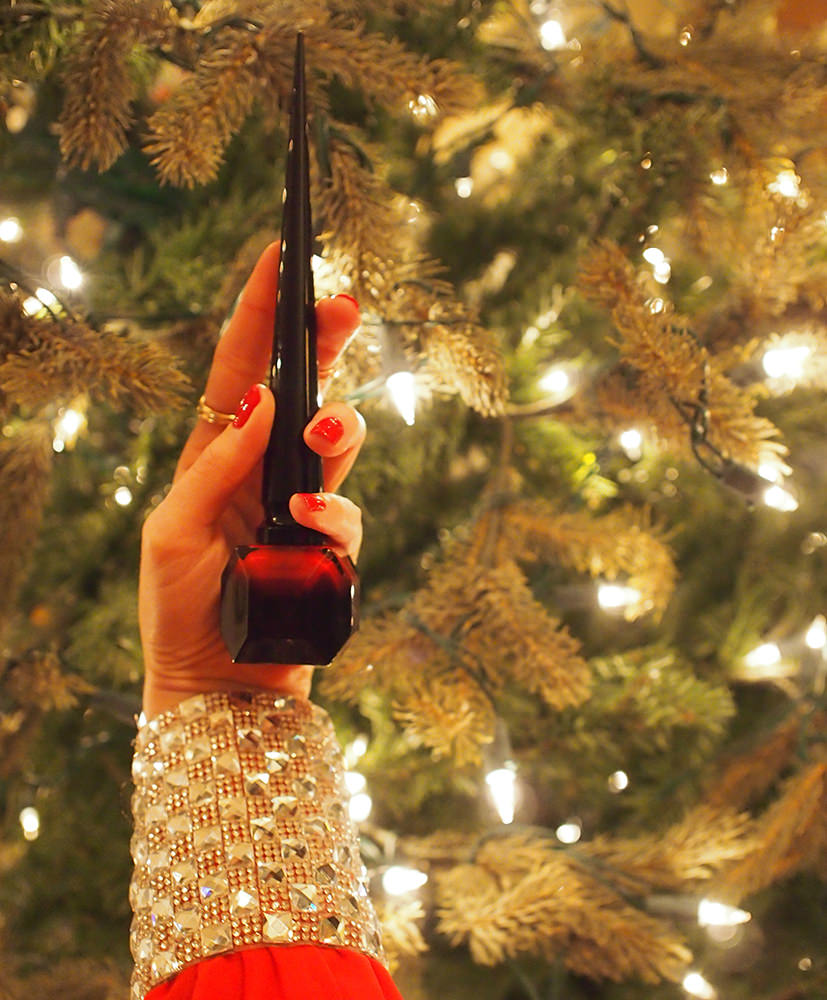 This is by far the biggest area of debate when discussing this nail polish. Any of the Loubouitn nail colors will cost you $50 (except the $675 Special Edition Starlight bottle, but you already read our thoughts on this matter). $50 is definitely a lot of money for a nail polish. However, what made me decide to buy this one was that I knew the quality I would be receiving before I even tried it.

While I was uncertain how long the polish would last (and that was one of the main reasons why I wanted to test it out), I knew both the product and experience would be a pleasurable and luxurious one. At the end of the day, it’s your money and only you can decide how you wish to spend it, but why you might choose to buy luxury nail polish is probably the same reason why you choose to spend hundreds, if not thousands, on luxury bags and shoes: for the experience, exclusivity and quality.

I don’t regret buying this polish at all. I love the color, it’s an easy application and it has a unique bottle. Would I buy more in the future? Probably not. But what I will say, I’m sure we’ve all spent $50 on sillier things, so a one-time buy probably won’t make you grimace any more than your last impulse purchase. 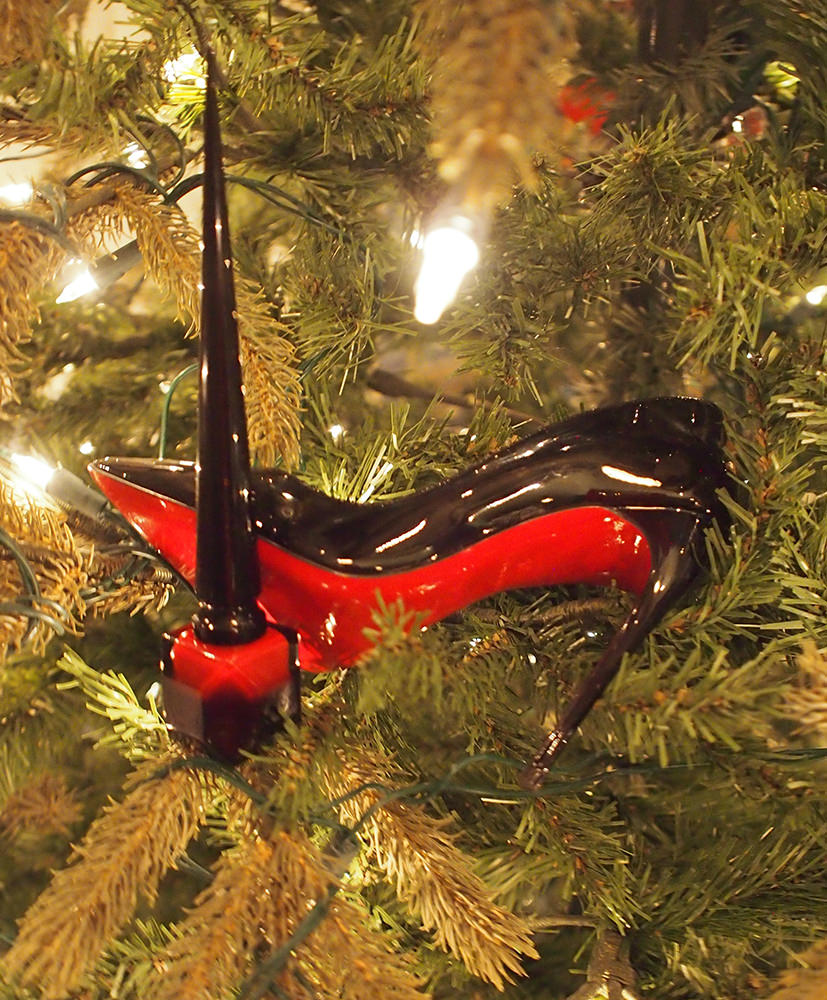 This classic red shade has reached iconic status in footwear, so I have no doubt this nail color will be classified the same way in years to come. The uniquely constructed bottle will most likely become a collector’s item, and the entire Louboutin beauty collection will likely be successful in tapping into the luxury market’s love for the brand’s over-the-top aesthetic. Also, despite the relatively high price tag for nail polish, this is still the most affordable way for aspirational customers to get a piece of the Louboutin pie. 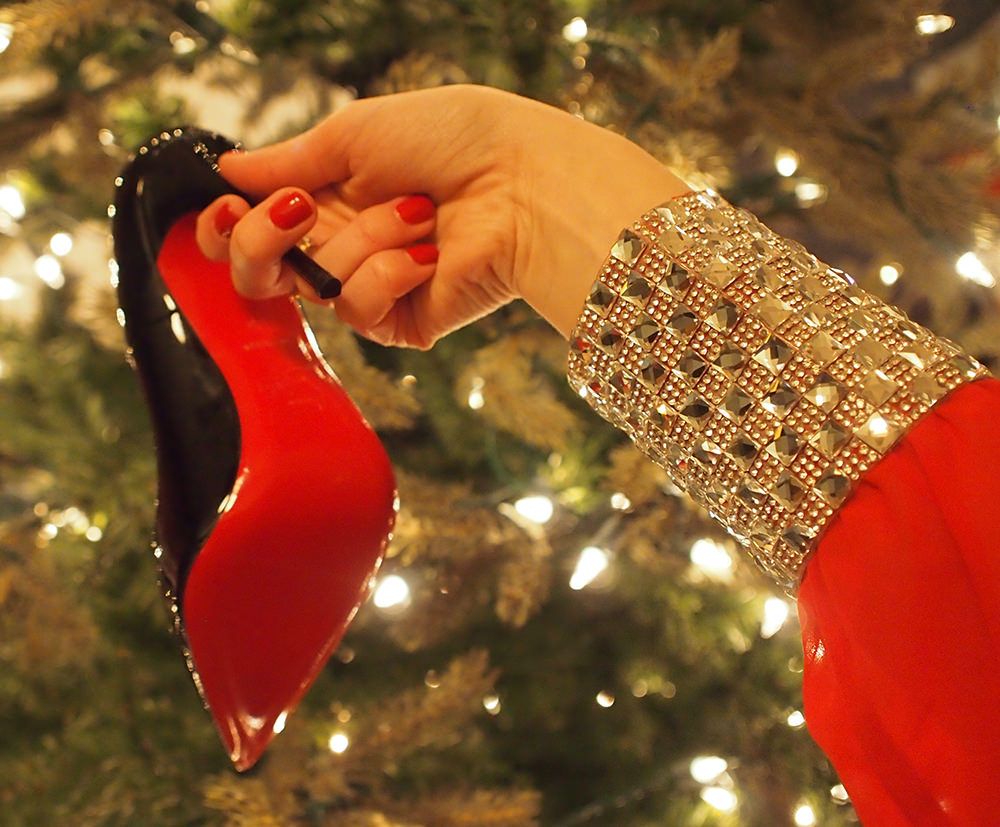 Overall, I gave this Rouge Louboutin a 4. The only downside to this nail color is the price. It’s steep for nail polish, but I don’t regret my minor splurge. It was a pleasure doing my nails with this elongated cap, and the color is classic and timeless. I loved the way the color looked against my fair complexion, and it doesn’t hurt that the color matches my new So Kates.

Buy your Rouge Louboutin Nail Colour through Christian Louboutin or Saks for $50.

Don’t forget to read more about your favorite shoe brands over on TalkShoes!

one question, can you fly with this in your bag?

I actually bought this in Atlanta and flew back home with it in my carry on!

Ha, you should be able to – it’s under the allowed liquid amount 🙂

Maybe mary was referring to the dagger-like bottle top–that could easily be viewed as a weapon, though a pretty one!

Welp, I am a) dense and b) unsure – never know which TSA agent you will get!

Yep! i totally think thats what she was referring to. LOL. And a fair question too.

Ha! It’s a very valid question! Like Megs said, it is under the liquid amount, but if I was traveling with it I would probably keep it in my luggage and not my carry-on. Just to be safe.

I also use it and love it but like I said yesterday (did you delete my comment?) the bottle is hideous.

I’m glad you liked it! Did the color last long for you?

It does! Not as long as a gel manicure but with the right topcoat it goes a couple days without chips, and the chips I see are pretty small. Mostly I bought it because I think it’s the perfect red XD

Same here, my initial chip wasn’t noticeable at all! It’s a gorgeous red, by far my favorite! 🙂 I’m going to keep experimenting with top coats to see which one works best and will last the longest!

Actually the new Revlon gel line has an amazing topcoat, and it extends the life of any polish you use it under! It costs like $6 and it got my Essie polish to last a week, I’m excited to try it over this next time I do my nails.

Thanks for the tip, I need to try it! Definitely keep me posted how long your mani lasts with the Revlon top coat!

After we had this conversation I was inspired to start wearing the Louboutin again so I immediately did my nails 😀 No chips yet! Thanks for posting this article, the photos are beautiful! I hadn’t worn this color in a few weeks but I fell in love with it again.

Aw, thank you! I’m so glad you decided to wear it again, it really is a gorgeous color! I’m actually going to do my nails tomorrow for the upcoming holidays. Enjoy the polish and it sounds like that top coat is working its magic 😉

I want one just to display on my dresser. My only complaint about the article is that I wish that there was a picture of the brush. I wanted to see the triangular shape.

These pictures are absolutely gorgeous!