Rihanna Loves Wild Shoes and We Love Her For It 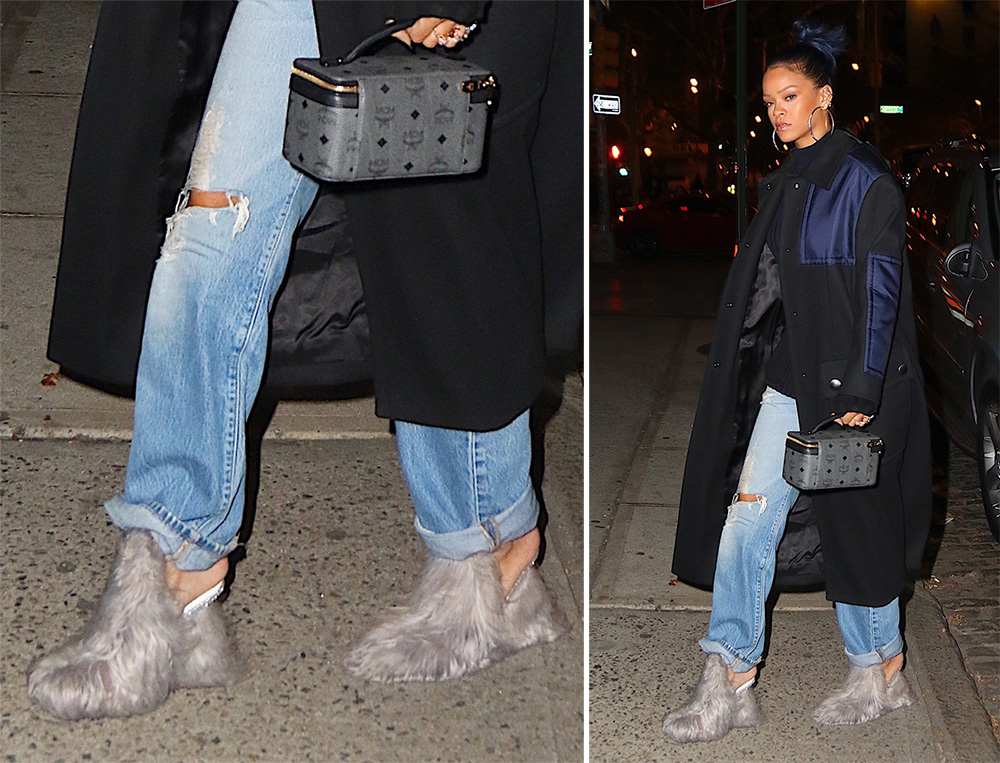 We are huge fans of Rihanna’s style, even though her handbag choices have gotten a tad predictable lately because of her very lucrative endorsement deals with Dior. But, Ri-Ri steps out in a different pair of shoes almost every night, and her truly eccentric designer shoe choices never disappoint. Even though they are occasionally determined by her other very lucrative designer endorsement deals. No judgement, Ri-Ri. We respect your right to make that money and fulfill your contractual obligations.

Rihanna wore these Dior pumps to an NYC club after performing at Barclays Center in Brooklyn. (Because she can’t just go home and take a bubble bath. That’s not who she is.) These look strangely unfinished for a Dior design, but Ri-Ri is clearly a fan. 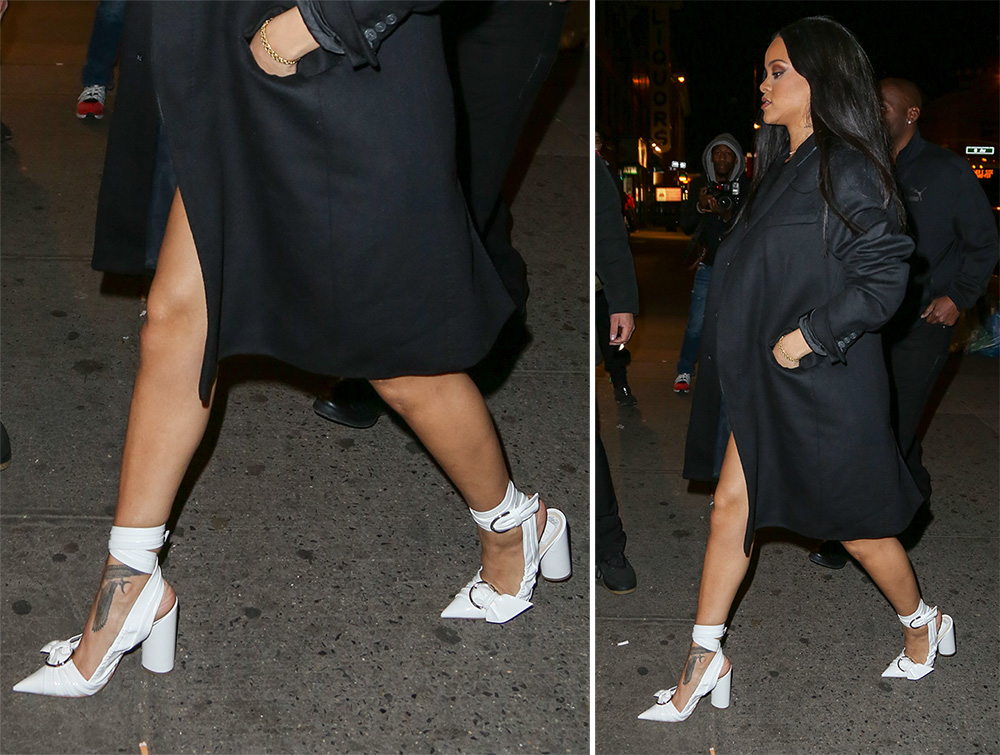 Sometimes, you just feel like wearing some furry Puma slip-on sandals to the club, women in stilettos be damned! Rihanna wore this full Puma ensemble to Hooray Henry’s nightclub in West Hollywood. 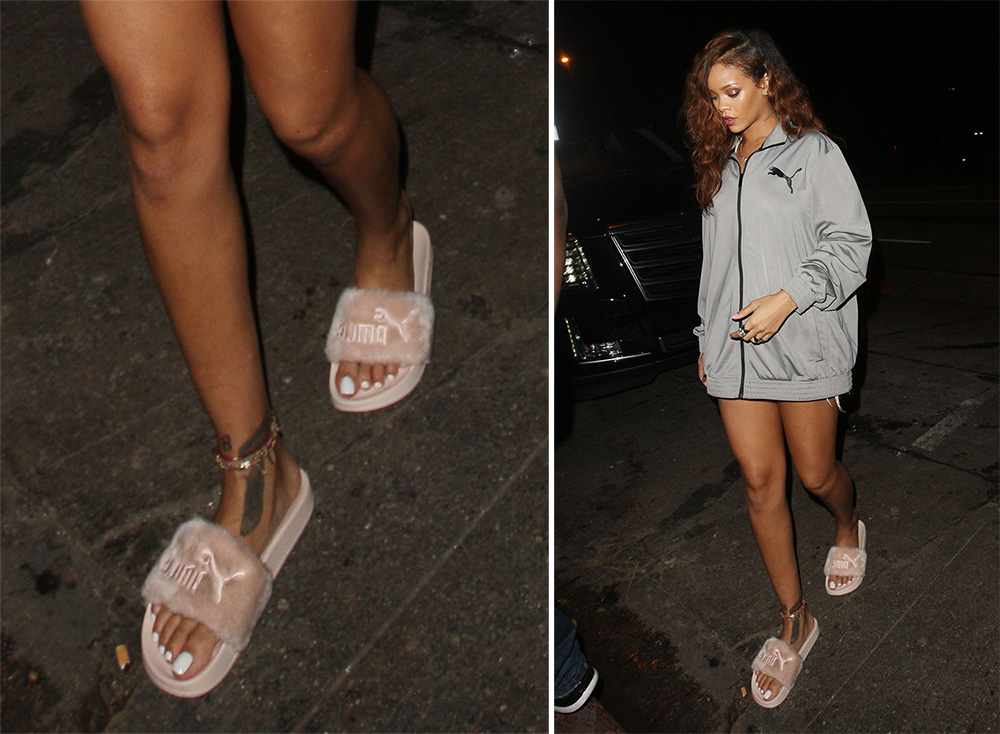 We’ve all heard of “athleisure,” but is “athluxury” a thing yet? If so, this full look is very “athluxury.” Rihanna wore these lacy Givenchy mules to The Nice Guy with Drake, who she has been partying with on the regular recently. 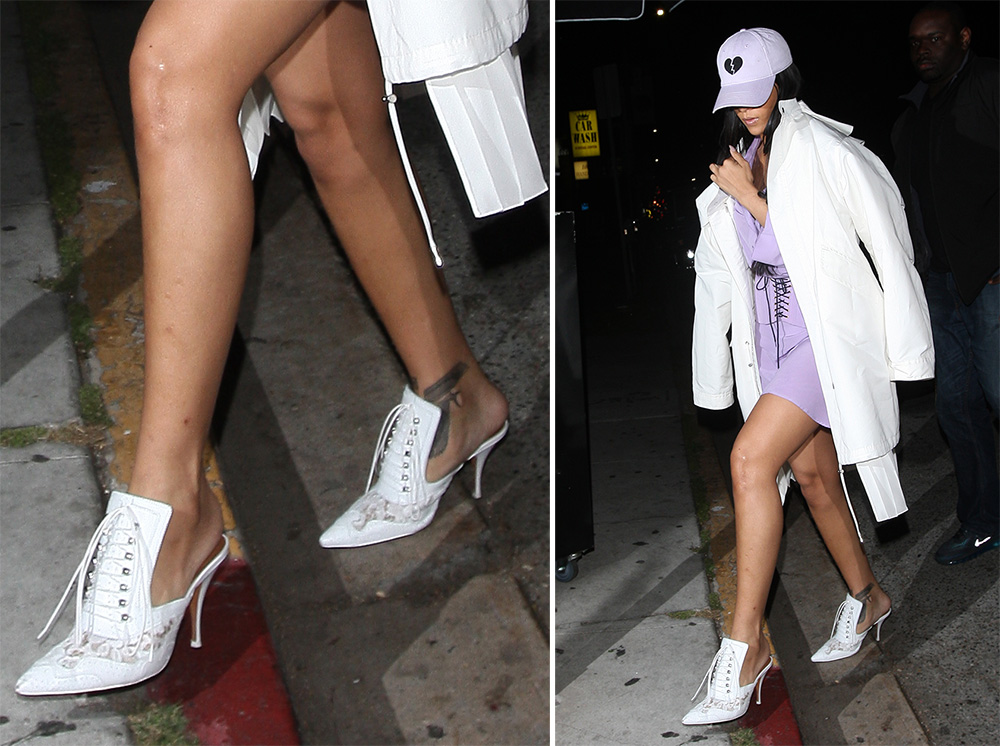 Rihanna paired this head-to-toe Gucci look with one of her new crinkled metallic leather Dior Diorevers (not to be confused with the Diorama) for a recent evening out in NYC. 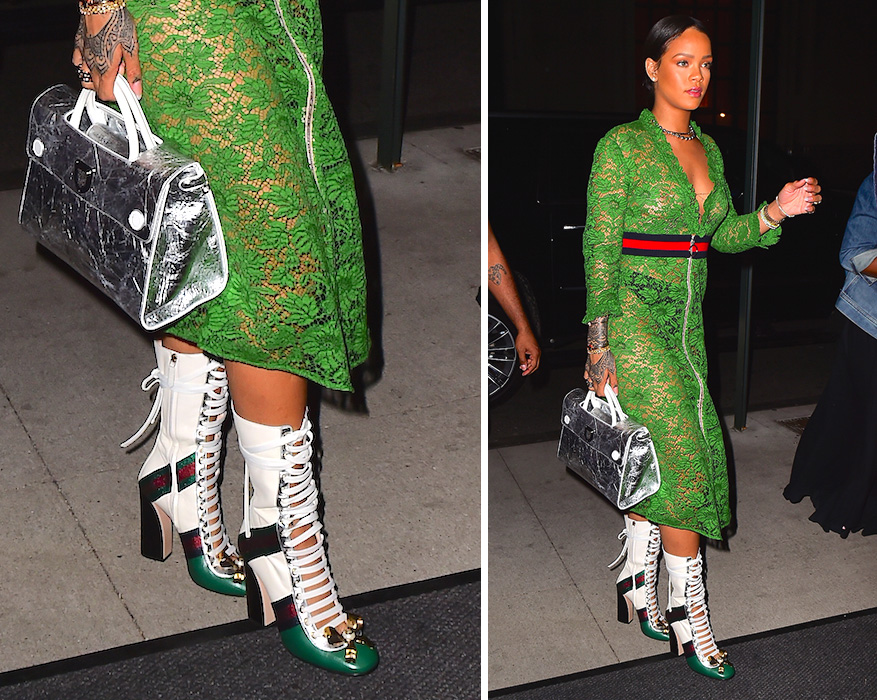 The woman LOVES mules, and she LOVES furry shoes. So we’re not terribly surprised to see her wearing these Maison Margielas on her way to get a late night tattoo at Bang Bang in NYC. She’s also carrying an MCM Cosmetics Bag.

Here’s a much more classically styled Rihanna (what a strange thing to say) walking the red carpet at the 2016 Billboard Music Awards in Vegas. She’s wearing an extra flashy pair of Manolo Blahnik mules. 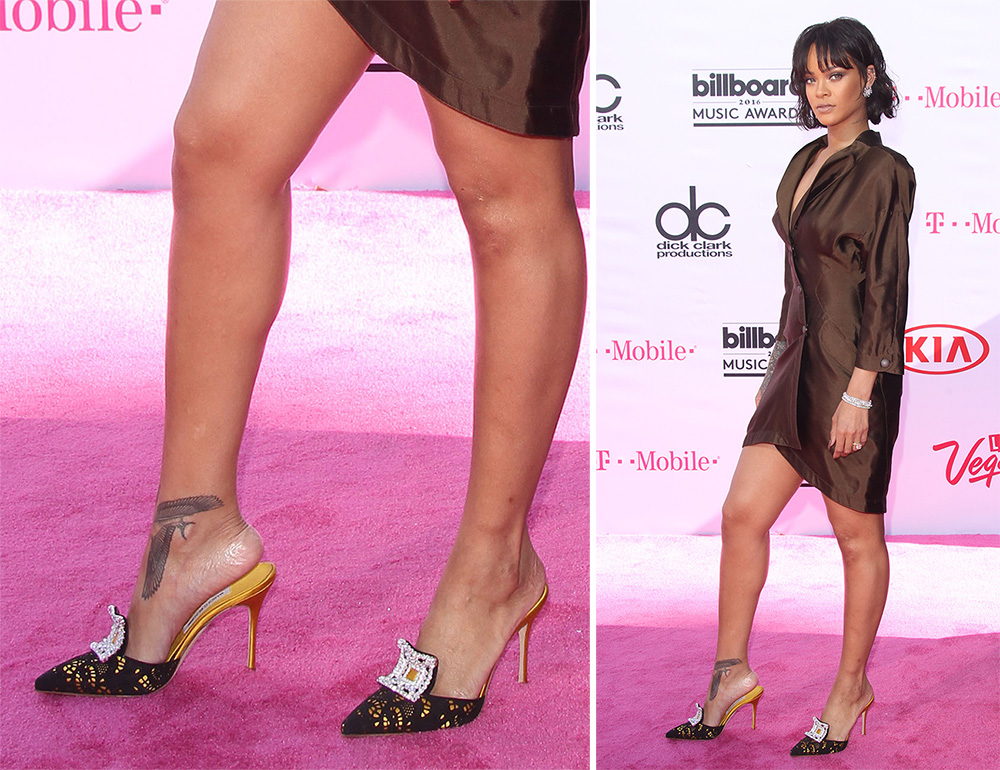 Were you aware that Rihanna did a collab with Manolo Blahnik? Well, she did, and all of the shoes are denim. Here she is wearing a thigh-high boot of her own design to Drama Club in London. Look again, the boot really does go all the way to the belt, and the belt is actually part of the design. These will only set you back about $4K. 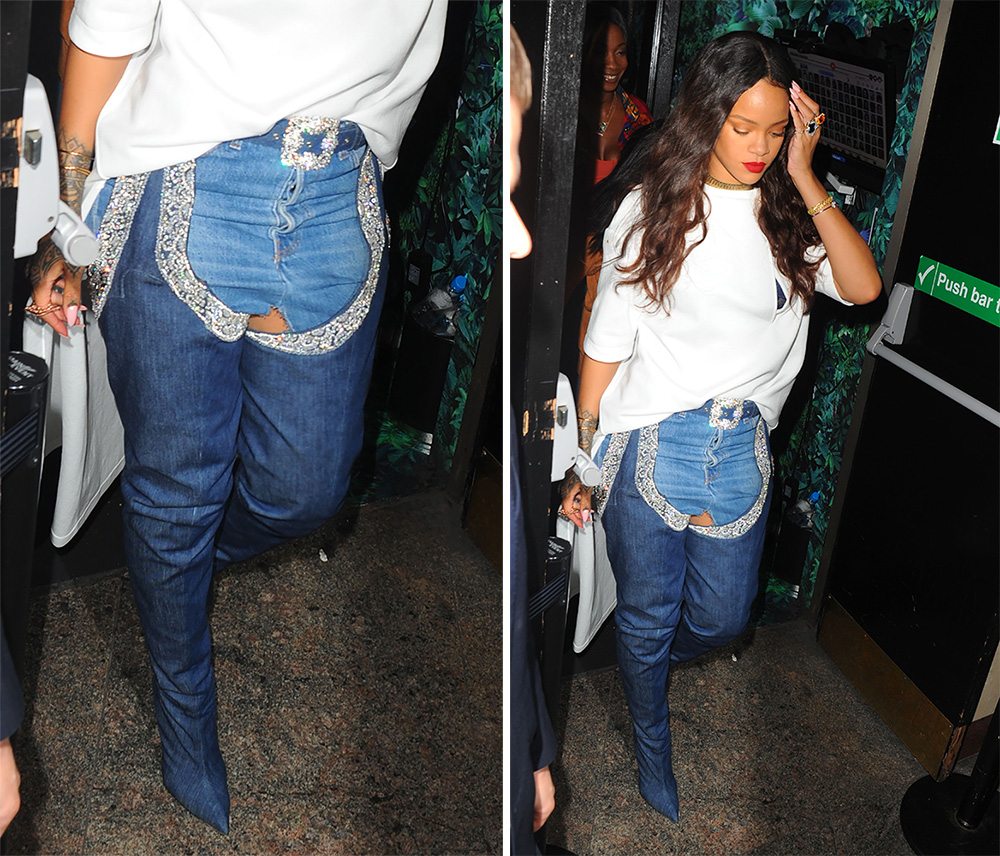 Finally, we’ll end with Ri-Ri wearing one of my absolute favorite outfits in recent memory. Rihanna wore this ensemble to have dinner with Naomi Campbell and several other gal pals in NYC. Her bag and caftan are both by Dolce & Gabbana, and her multi-colored platform shoes are of course Stella McCartney. 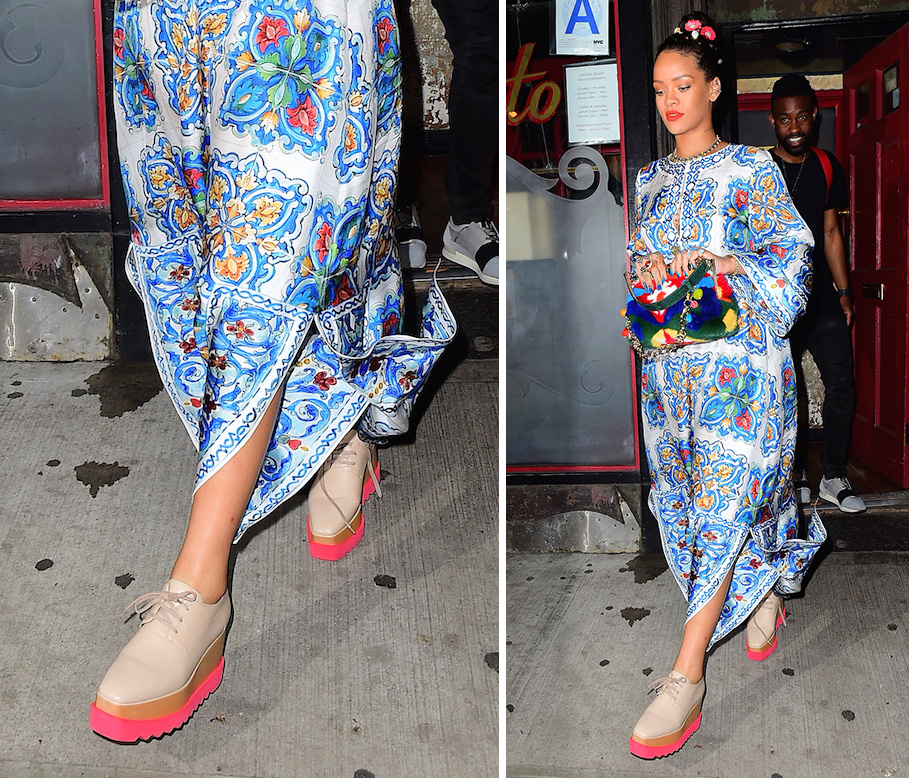 Those Stella platforms are my favorite shoes in the entire world! Really considering purchasing the boot version this fall.

I got the Blahnik Borli mules on Skyler, the fashion weather app. I love them so much. People always ask/compliment them. Super comfy.

Well she is hot right now that’s why everything she wears would sell, same for the Kardashian girls. One day when they are not no longer in demand the designers wouldn’t even touch them…

I have been on the hunt for that exact same grey MCM bag in slide 5 forever!!! But sadly no luck. 🙁

She can get away with it because of her style. Not something I’d invest in. They look like faun feet.

Hun, time to leave the sheer dress to the 20 year olds. I’m not saying to you look bad, but there comes a time to dress age appropriate.