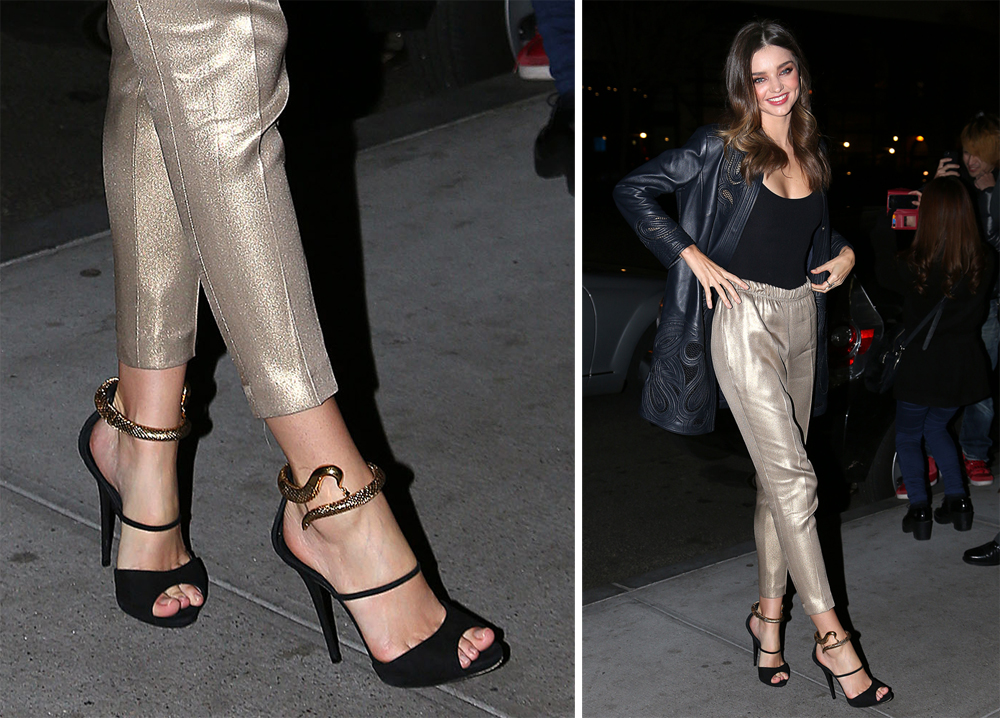 We have long admired Miranda Kerr because few celebs (yes, even supermodels) make A-list style look so effortless. Last week, we showed you all the chunky heels Taylor Swift has been favoring as she continues to careen through the fly-by-night fashion preferences of her mid-twenties, but if the thought of chunky heels (and being in your mid-twenties) triggers a slight gag reflex, well, Miranda’s sartorial shoe game is the perfect antidote to all of that.

Here’s Miranda arriving in Paris for Fashion Week last October to check out the Spring 2016 collections. She’s wearing a pair of beautiful velvet lace-up Balenciaga boots. She’s also carrying one of her favorite bags, a black leather Céline Tie Tote. Note how she mixes several different textures here, and it doesn’t look weird, because she sticks with neutrals. (Are you taking notes?) 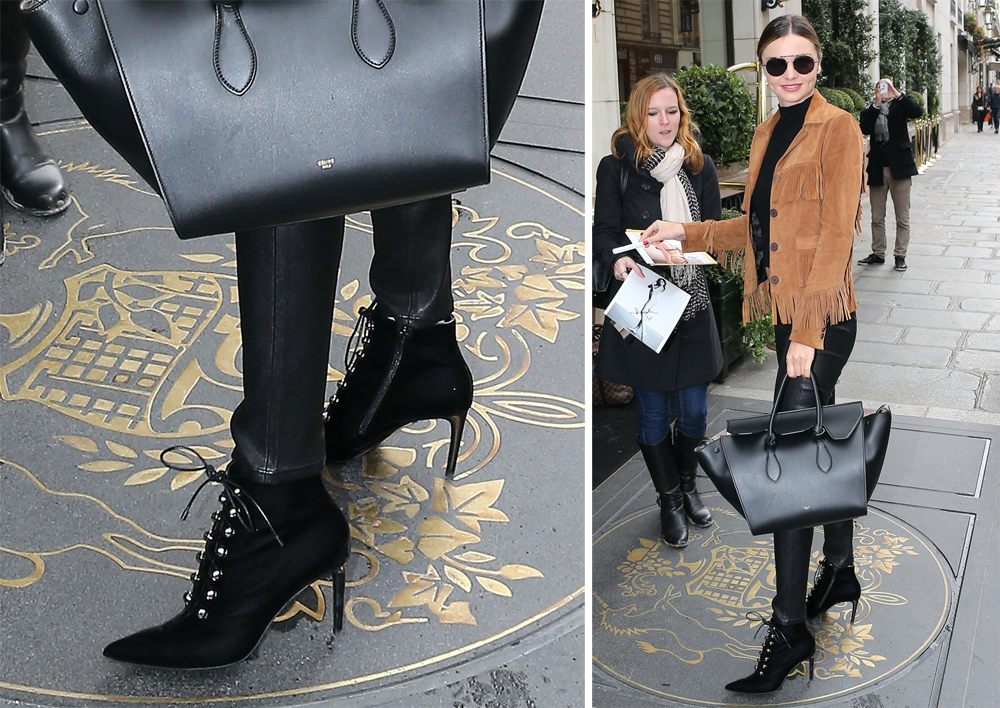 Miranda wore these breezy beige Gianvito Rossis to meet fans at a press event event in her native Australia. This is exactly what one should wear to meet their fans: something simple and beautiful that they will easily remember forever. 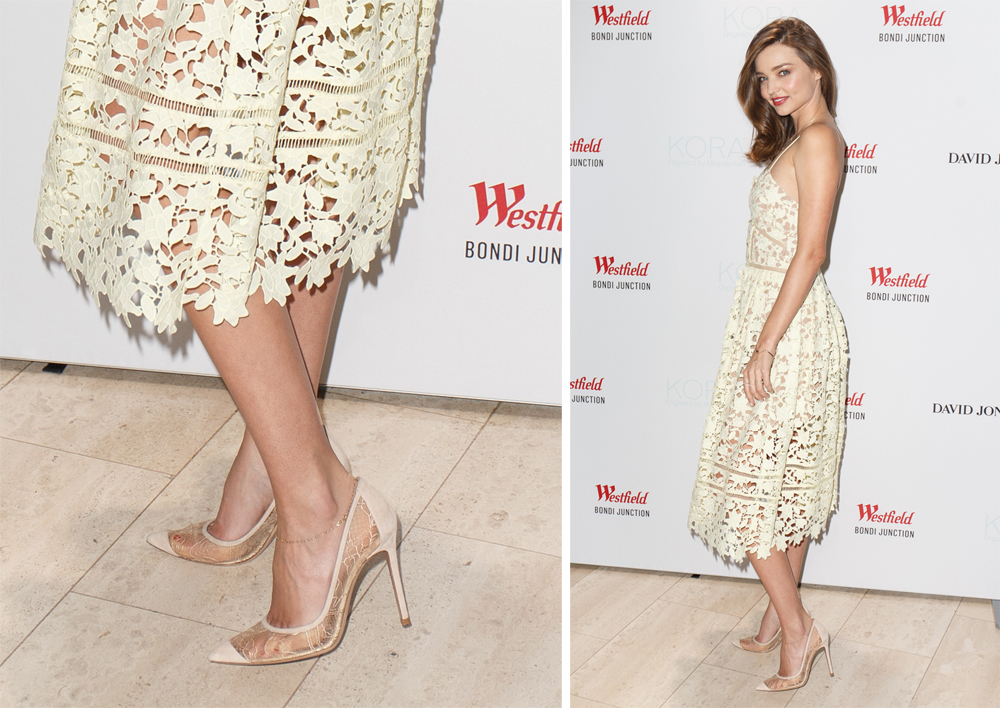 Miranda can’t get enough of Gianvito Rossi. Here she is outside of LAX in another pair of the designer’s shoes. I have always been a great advocate for double denim, but Miranda’s pale pink Gianvito Rossi sandals really take it to the next level. 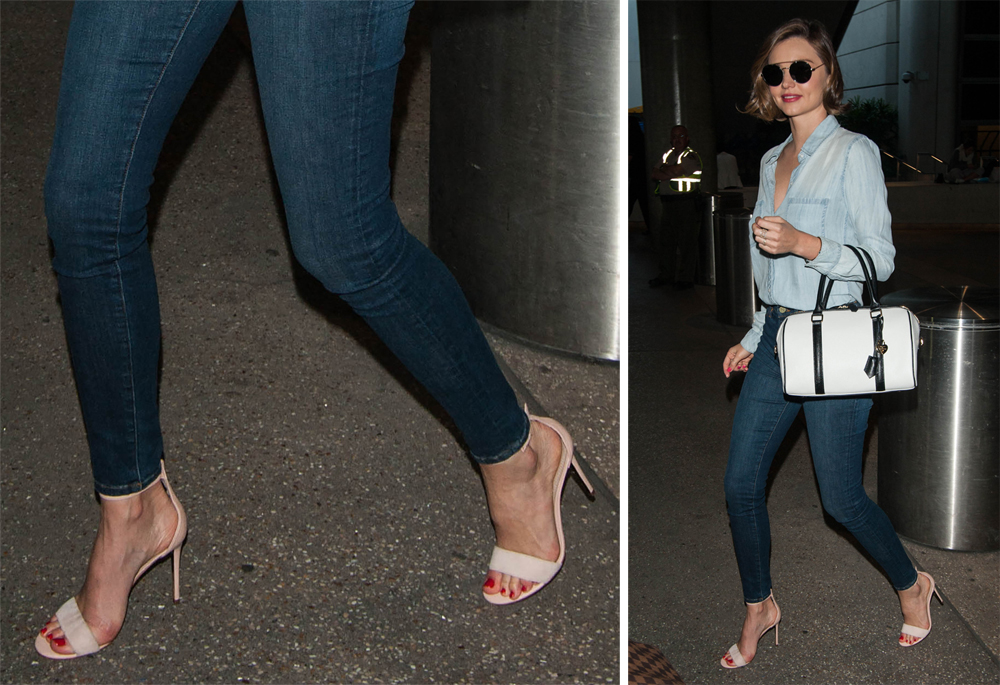 Miranda wore these serpentine Giuseppe Zanottis to a release party of a new ESCADA perfume at Sephora in NYC. Miranda is the face of the new ESCADA Joyful fragrance, of course.

Here’s Miranda leaving her NYC apartment in a gorgeous pair of Hermès boots. We so rarely see celebs in Hermès footwear, but these supple, buttery black leather boots do not disappoint. Miranda donned these minimal red Jimmy Choo Darilyn Pumps to a press event in NYC. You can take any look so much farther with shoes that perfectly match the color of your lipstick. 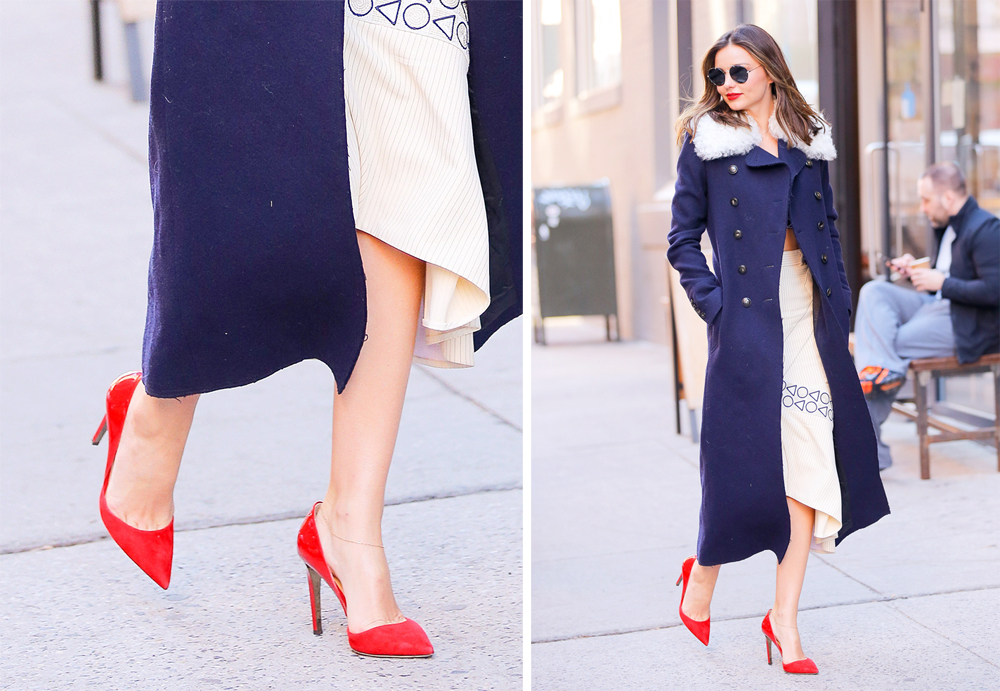 Lanvin does a pretty top-notch take on an summery wedge sandal. Here’s Miranda wearing her Lanvins as she slips into the Carlyle Hotel to prep for last year’s Met Gala. As you can clearly see, she’s carrying another one of her favorite bags, the Mansur Gavriel Bucket Bag. 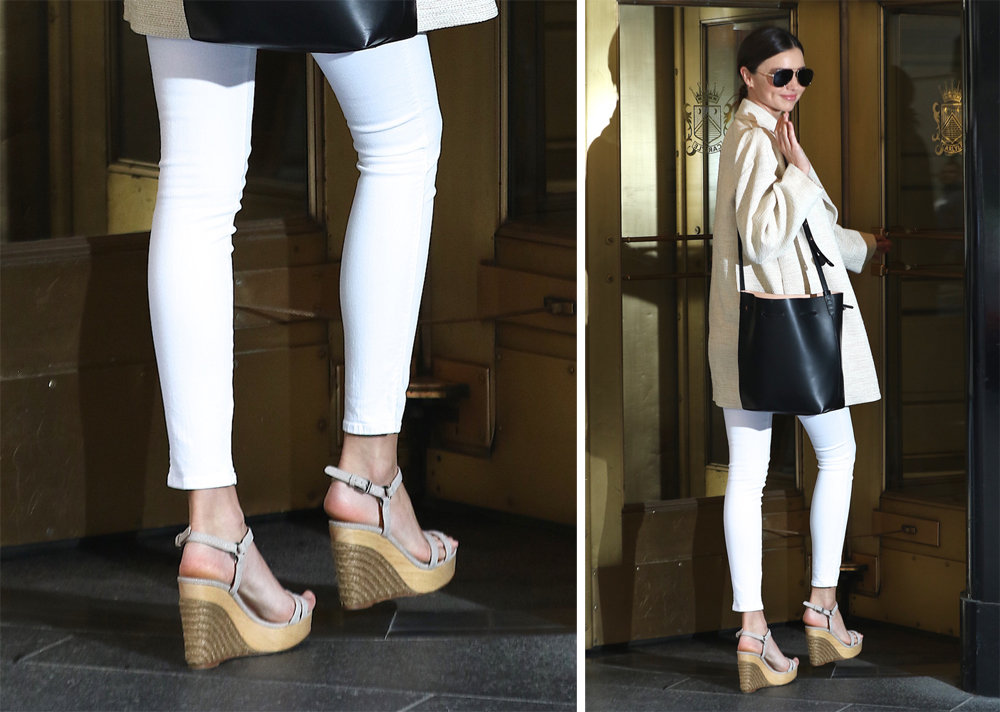 “Chaos” is such a strange style name for such a comparatively simple, unarguably elegant Manolo Blahnik sandal. Miranda wore these Manolos on a recent visit to El Compadre in LA. 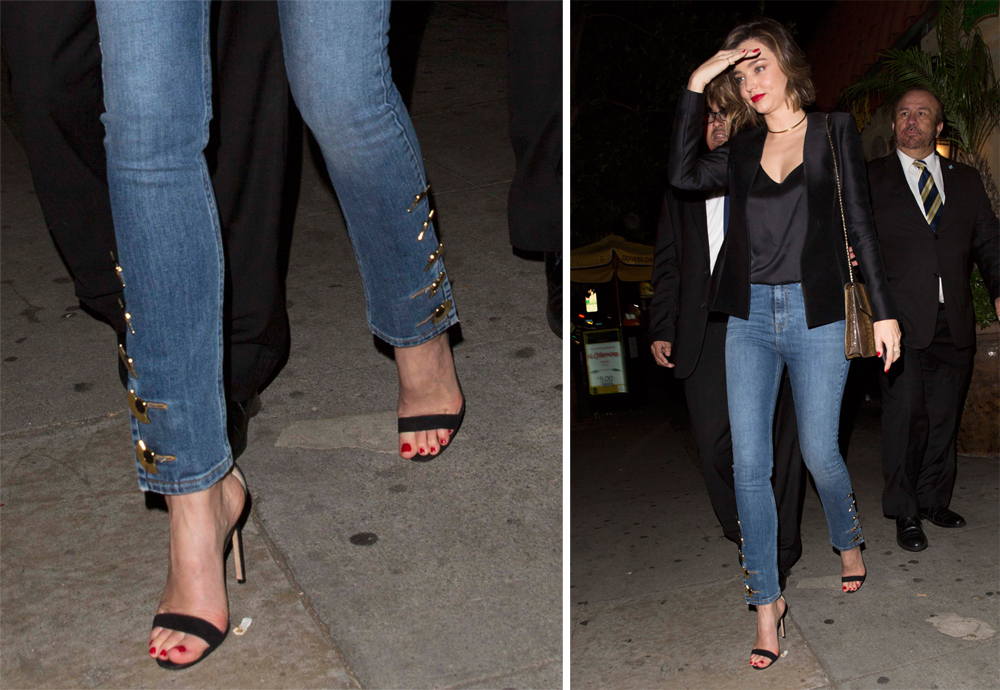 We’ll round out this post with a few of Miranda’s current favorite Louboutin styles. Here she is leaving her Paris hotel during Fashion Week in a pair of multicolored Christian Louboutin Pumpstagram Pumps, which made their debut last fall. 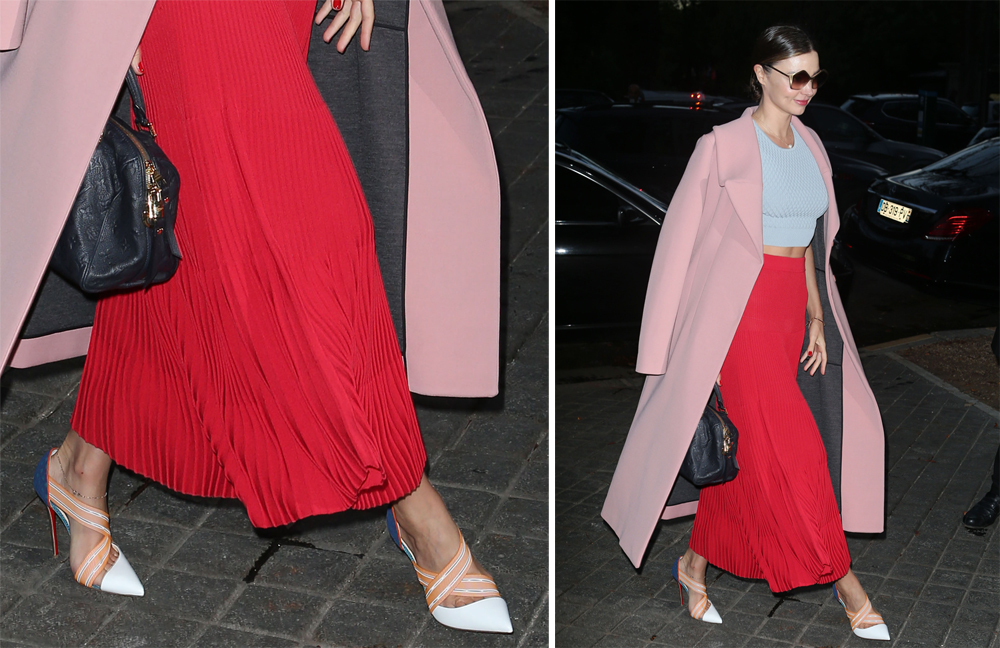 And finally, here’s Miranda in a pair of sexy fishnet Louboutins at last year’s Cannes Film Festival. Her shimmering black gown is by David Koma. 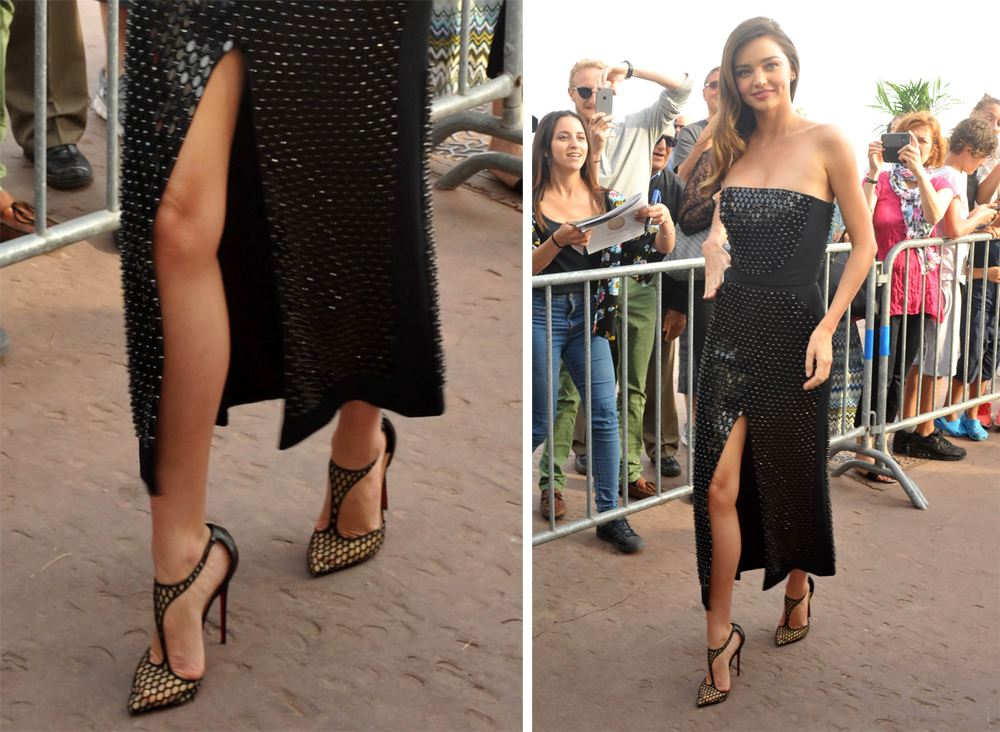