Keeping Up with Kylie: Check Out the Bags Kylie Jenner’s Been Carrying Lately 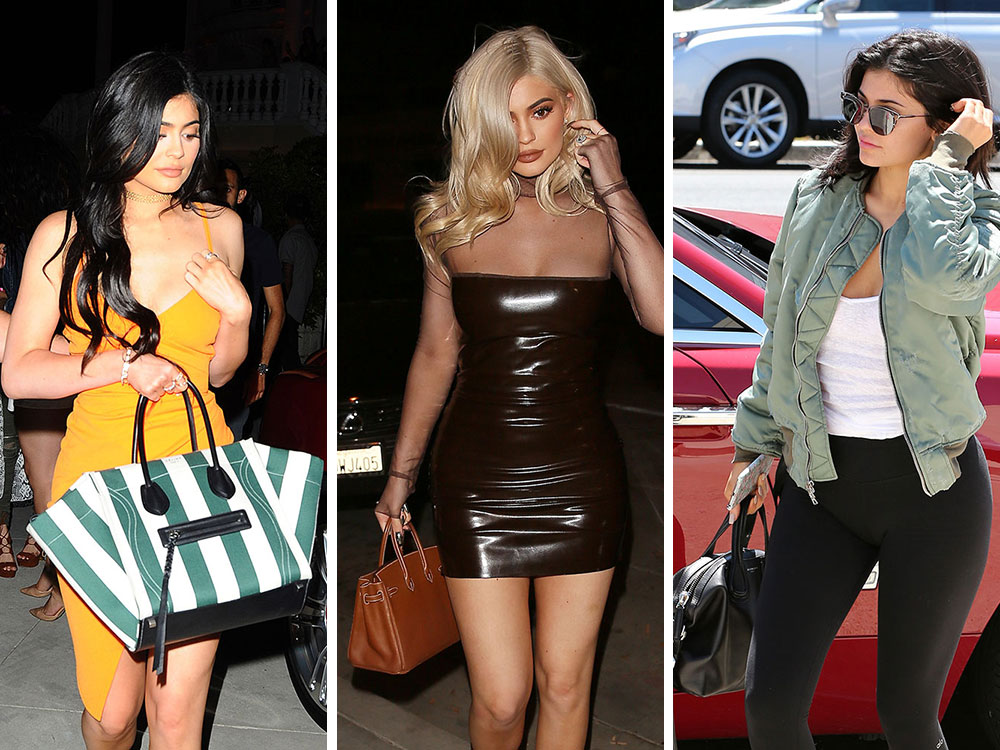 This is not the first time we’ve keenly focused our attentions on Kylie Jenner‘s handbag collection. Or even the second or third, honestly. Like most of her clan, Kylie amasses designer handbags at a pace that most celebs can’t or won’t match. As her collection continues to expand, her taste in bags and preference in brands evolves, occasionally in surprising and unexpected ways. But recently, she’s just been carrying a lot of neutrals, exotics and Birkins. And neutral, exotic Birkins. We figure this period in her consumerist history is probably still worth exploring.

Here’s Kylie leaving a party in LA with Tyga and a green striped Céline Phantom Luggage Tote in tow. We first saw Kylie carrying this bag two years ago, and it’s holding up quite well. 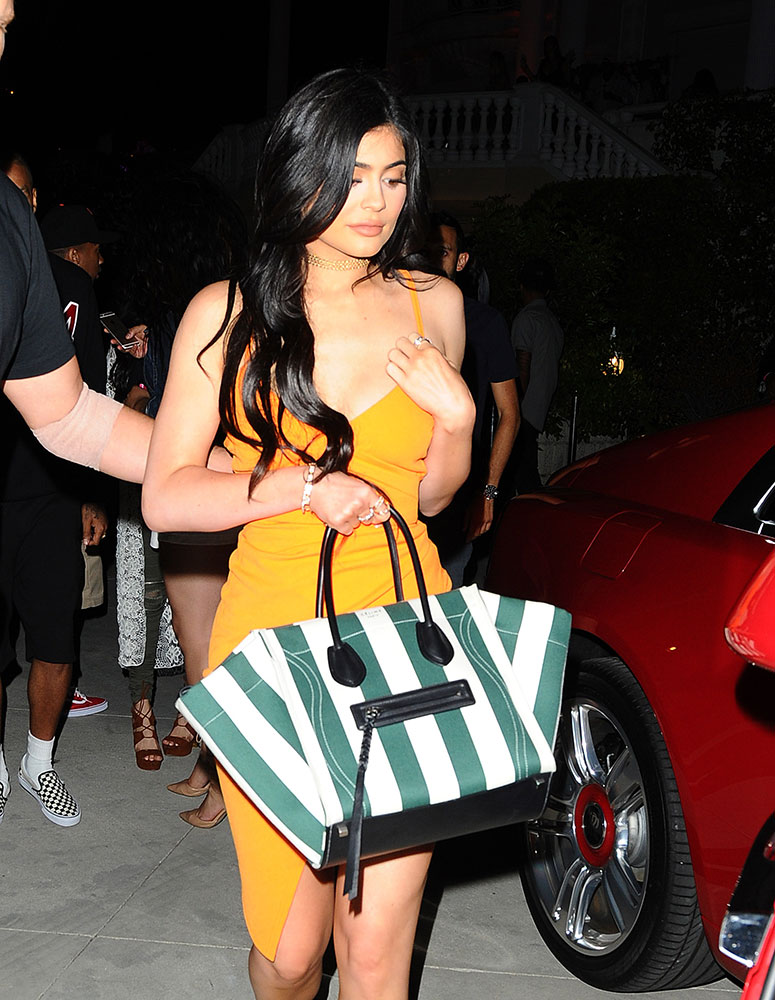 Kylie recently carried this version of the Givenchy Antigona to dinner at Nobu in NYC. While we started off with colorful stripes, it seems Kylie is currently more fond of neutrals. 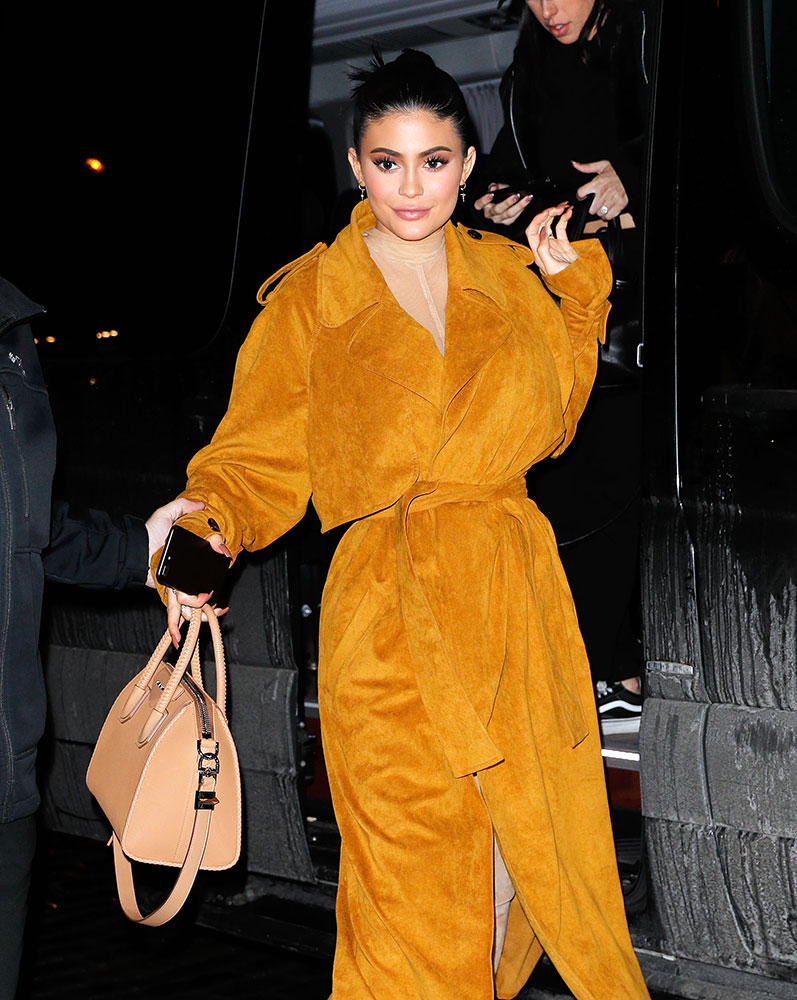 Here she is carrying a black leather Givenchy Nightingale Bag while heading into Milk Studios with Tyga. 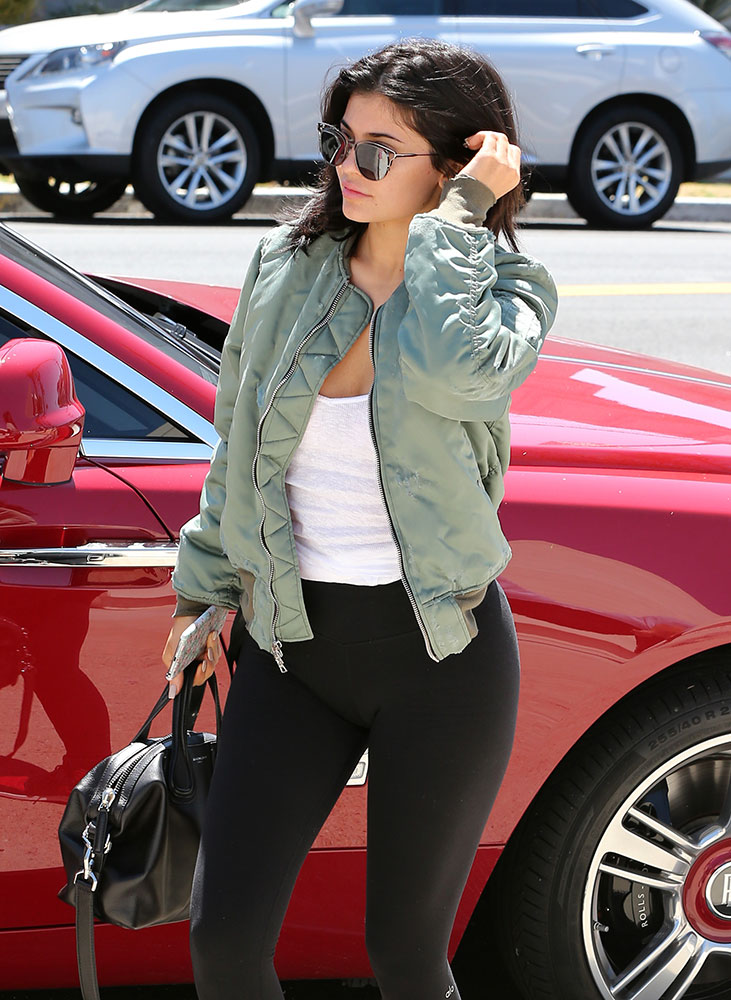 Paps spotted Kylie carrying this luxe, exotic Gucci Python Dionysus bag as the couple left Nobu’s Malibu location. When something is right, it’s right, and Kylie’s relationship with Nobu is clearly so right. 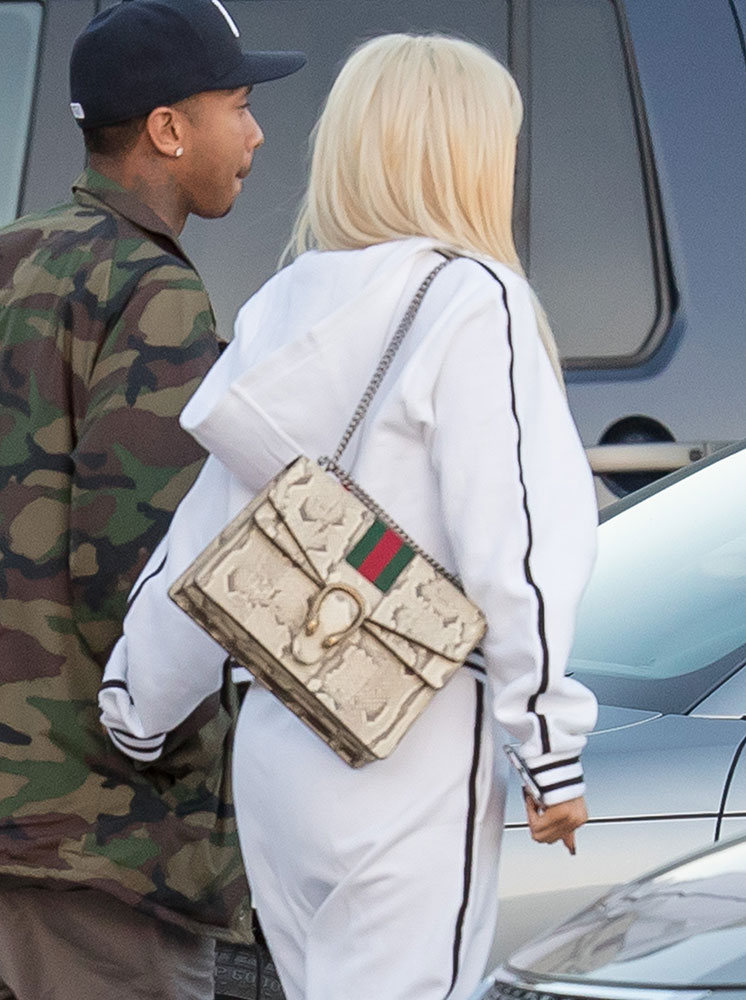 So many familiar things seem almost unrecognizable in this photo, namely, a platinum blonde Kylie and the teensiest brown Birkin I’ve ever seen. Kylie carried this while visiting Catch in LA. 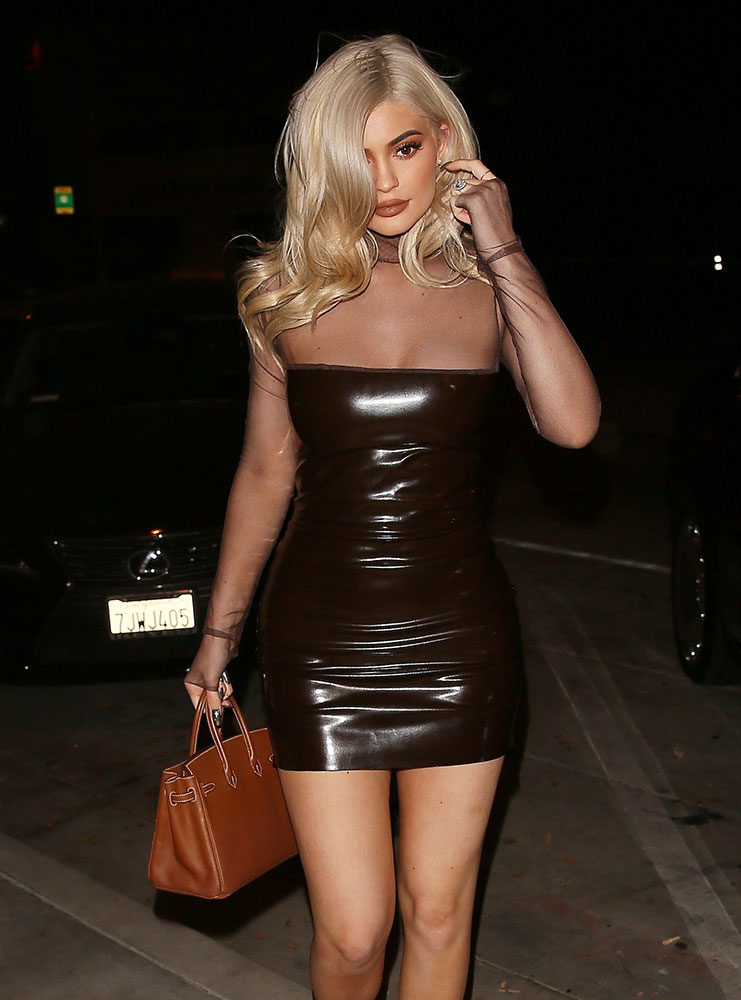 Here she is leaving Maxfield in LA with a slightly larger, more exotic croc version of the Birkin. 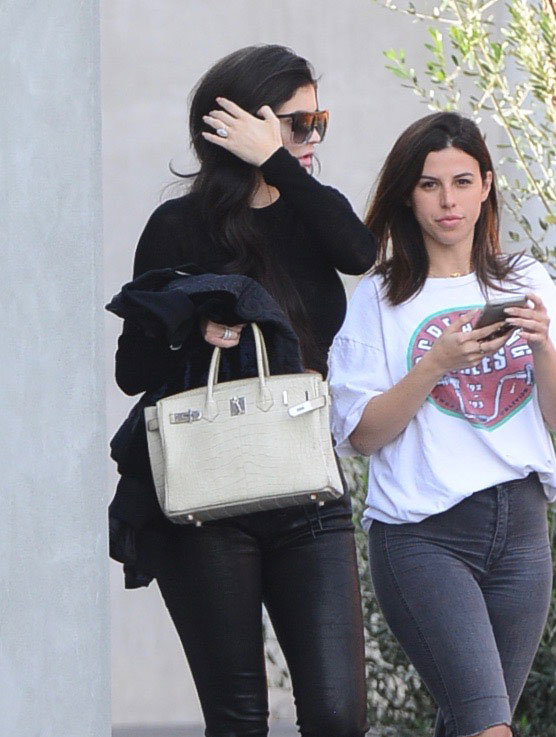 She also carried this bicoastal Birkin while doing a little shopping in Soho with Tyga. 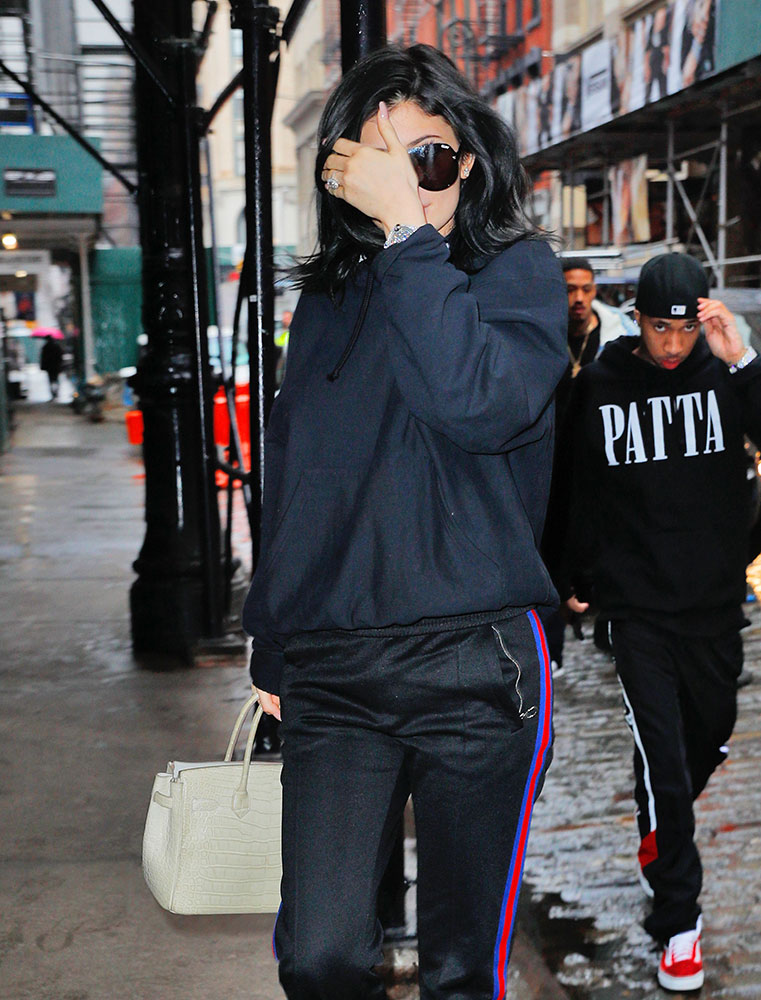 Finally, here she is enjoying a girls’ night out with big sister Kendall in NYC. As you can see, she’s paired a croc M2Malletier clutch with a low-cut, skin-tight white jumpsuit. I’m sure that clutch is what our eyes all landed on first, right? 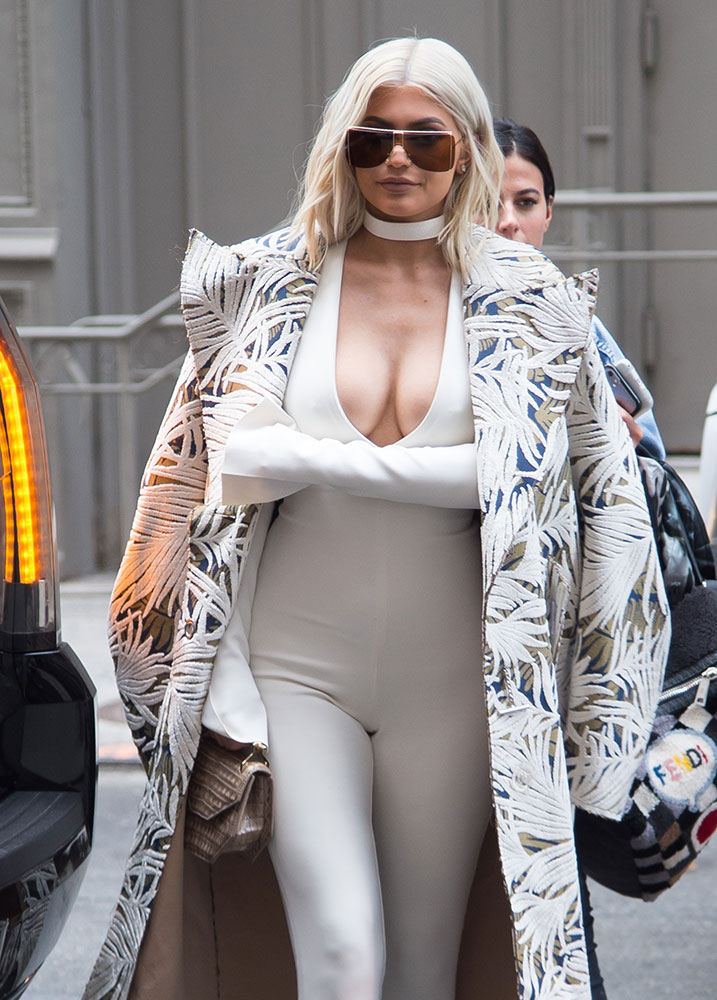 She look so cheap. Sorry not sorry

Could not agree more. Lol

Great bags on a girl that I don’t find so great. Simply not a role model for any young girl with the values that I want for my own daughters.

Could tPB just be pronounced a Kardashian/Jenner-free zone already? I want no involvement in funding their life. I don’t want to see their faces. I just want them to go away. Lousy role models, zero accomplishments. They are only famous for being famous. And they got famous because the mom of the family pimped out her daughter’s sex tape.

I’d like to see a one month all celeb-free zone. So sick of celebs. Same boring people, same bags, same locations, same hype.

No fashion or beauty-related blog is ever going to stop talking about the K/Js, honestly. They bring more page views than most celebs.

Can we have a little bit of a break from the Kardashians???

My daughter who is Kylie’s age says that she looks like an older woman who is wearing her daughter’s clothes thinking it makes her look younger. I know the Kardashian/Jenner clan has a lot of bags but I could use a break from them on Purseblog.

Too much bared skin and clothes that make her look 20 years older than her real age. That last photo is just wince-inducing.

It’s never about the bags with this family and its daughters.

Love the fact that she and her sister have a handbag line that they never get caught carrying. That should tell you that everything they do is for profit and their handbag line is cheap and ugly.

so glad I’m not a celebrity….