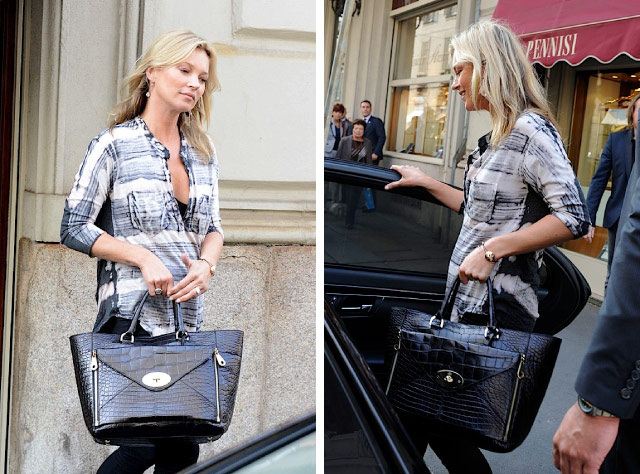 Ahh, the perks of being an internationally mega-famous supermodel. Chic parties, global travel, endless free swag. Not only did Kate Moss sit front row at the Mulberry Spring 2013 show earlier this week, but the Brit beauty got to be the first person to debut the instantly covetable Mulberry Willow Tote off the runway, barely 24 hours after the bag debuted in London.

At that point, Moss had already jet-setted to Milan, where paparazzi caught her dressed down for an afternoon of shopping before Milan Fashion Week got into full swing. Kate’s black croc (or croc-embossed, it’s difficult to tell from pictures) tote appears to be the larger version of the two that debuted on the runway, and even though she’s a British model who sat front row at the show, I’m a bit surprised to find her carrying the bag. Kate’s not the type who tends to wear or carry things that are obviously “placed” by brands, and although this bag seems to be, I doubt she’d have bothered with it if she weren’t actually a fan. It should go without saying, of course, that we’re also huge fans – check out more pictures of Kate and her Mulberry bag after the jump. The Willow Tote won’t be available in stores for about six months, but you can shop Mulberry via Net-a-Porter. 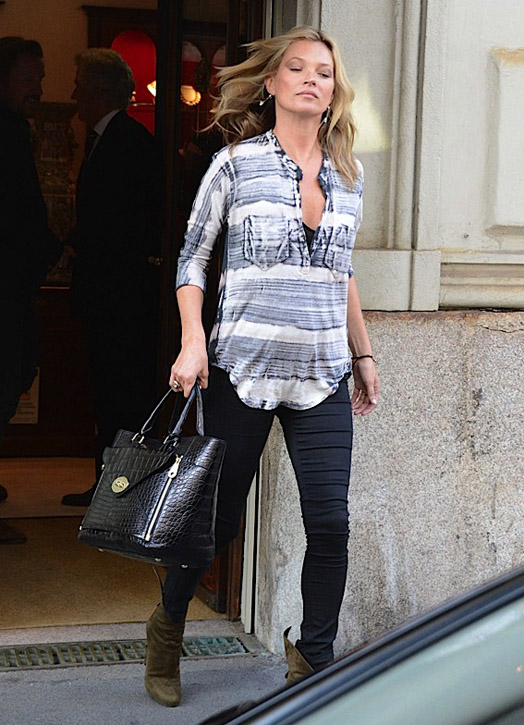 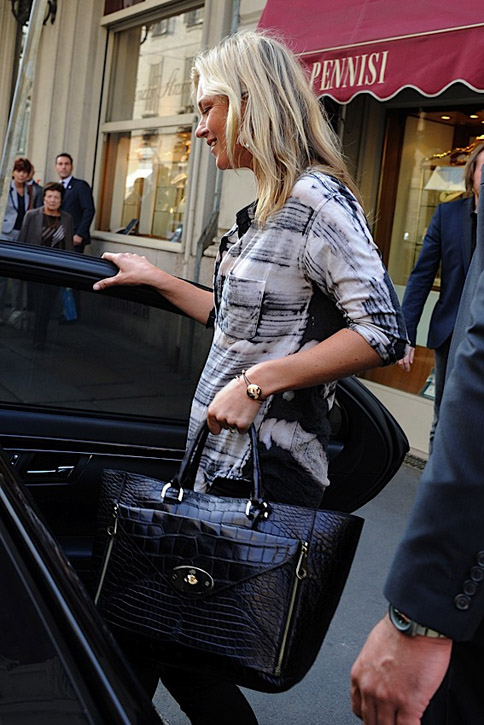 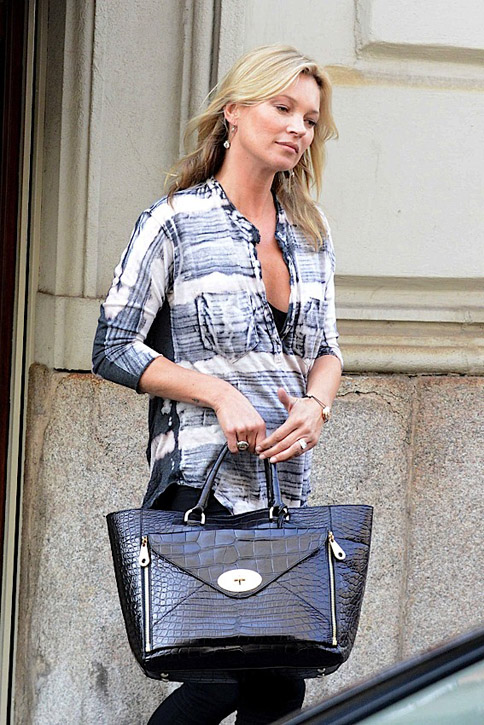 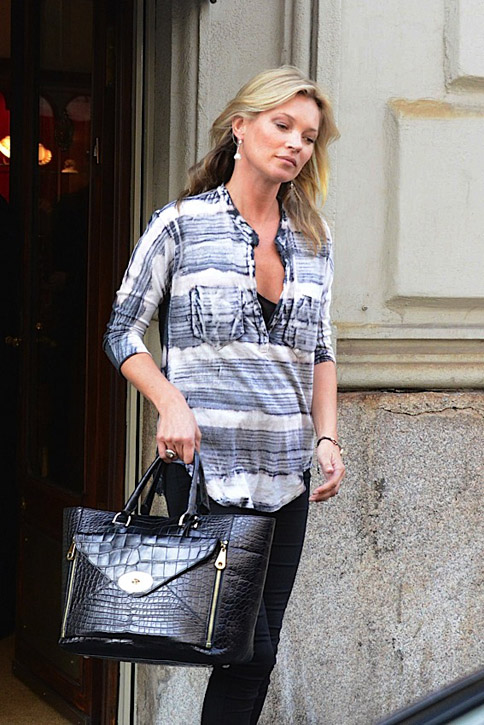 can we get pictures of what the inside of the bag looks like? i wonder if its open or zippered?

At this point, we can only get the pictures that Mulberry releases since the bag isn’t available in stores yet.

Hi its a aligator, and its already available at the shops, but take note not all store carry this its limited pieces worldwide…thank you.
zappy ming…

Any idea what the price point might be? Have to start saving my pennies…

We don’t know for sure yet, but the collection is supposed to be up for pre-order on Moda Operandi in the near future, so we’ll almost certainly know then. My guess would be $1500-$1700 for the big one in regular leather.

Not into the bag so much, but I really like Mossy’s shirt.

they probably gave it to her for free to advertise for mulberry. that wouldn’t surprise me.

I think Kate just loves the bag that is why she wears it. I saw her at Heathrow once and she was carrying it so she definitely uses the bag when she is off duty, not just for the paparrazzi.

Oh, I’m absolutely positive they did. I’m just not sure if they paid her an extra fee for carrying it on top of the free bag – she’s usually doesn’t wear/carry things that seem obviously “sponsored,” which is why I think that perhaps she just…likes it.

Does anyone know who designed her bracelet? I noticed it in the Mulberry show photos as well. Love it!!

its lovely but i guess its not a shoulder tote:(

she’s being paid for sure…..Mulberry picked a few girls to work with….such as Alexa, and since she’s british and have been carrying Bayswater for awhile, so why not her, The other two I remembered would be Kate Bosworth and that Olivia woman.

Kate Moss doesn’t wear things she doesn’t like. I am sure many designers give her free items, but she only wears bags she really loves over and over again, regardless of whether she got it free or not. I think the Willow suits her perfectly, she makes it look super edgy and cool.

when is this bag in stores?

Mulberry bags up to 60% discount, free shipping on all orders, if you want to save money look at my name ^ ^