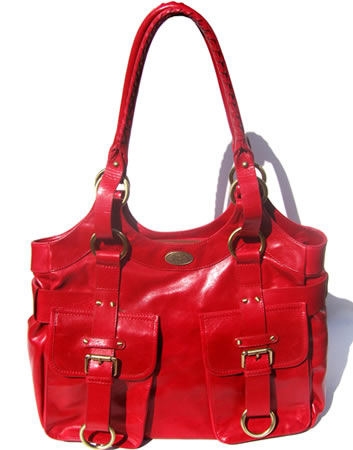 It started with me wracking my brain trying to figure out the designer of Katherine Heigl’s red handbag. It then turned into me asking you all to help figure out the designer of her bag. Which only lead to all of you wracking your brains and trying to deduce the right answer. Then I asked on Purse Forum and they were all stumped. We were all hitting a brick wall; noticing similarities between this bag and other designers we have seen, such as braided handles like Balenciaga, and a feel of Mulberry. Luckily, the intelligent Becca on our forum scoured the web and found the designer! The red handbag Heigl has been carrying is the Le Petitpas Wilm Handbag. Le Petitpas functions differently than many designers we know, releasing a new handbag every six months to a year in limited quantities. Once the bags are sold out, there will never be another of the same released. This is a different concept that sets this brand apart from others. Right now their limited edition bag, with less than 500 being produced, The Wilm is garnering the attention of handbag lovers world-wide. The Le Petitpas The Wilm is designed with lush Italian leather with a chic red finish. The handles are hand-stitched and the hardware is speckled bronze plated. There are two front pockets with magnetic closures. At the base of each handbag a limited edition number is embossed letting you know which number of the batch is yours. The brand states that the signature Le Petitpas markings and world renown ‘P’ hardware are found on the bag, though they were not renown to me until now. This is an absolutely stunning bag that has garnered attention near and far and has finally been identified. Buy at Le Petitpas online for $1270.