Why Does Reese Witherspoon Own 3 Ferragamo Fiammas, and Other Celeb Handbag Quandaries 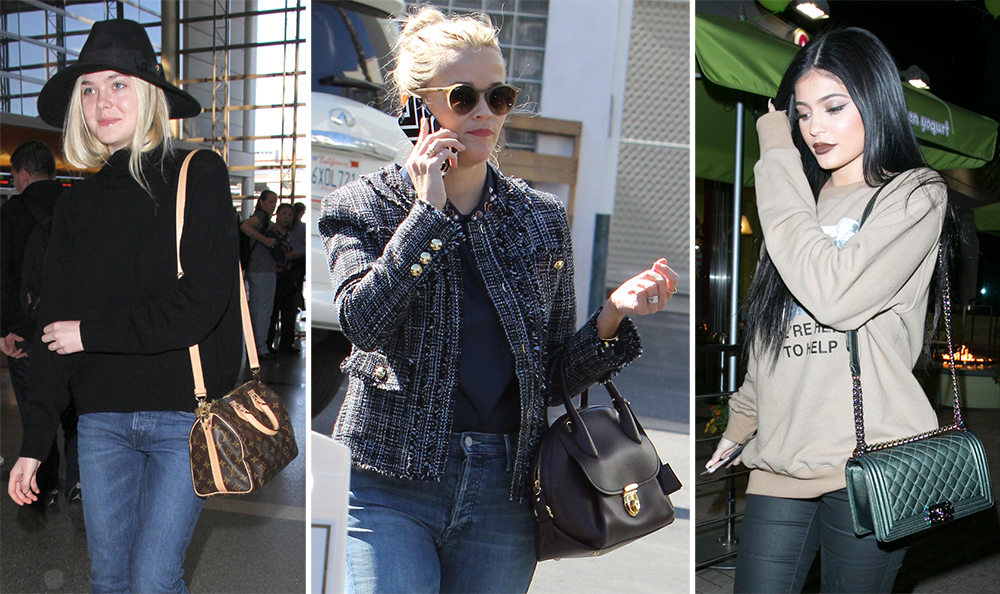 If you’re a loyal PB reader, you might be able to guess which bag Reese Witherspoon loves enough to buy three of them, even though her handbag collection is vast. (See here and here.) But if you can’t, we won’t hold it against you. The bag enjoyed a surge of popularity right after its release in the summer of 2014, but it’s a classic-looking style that’s sure to withstand several seasons to come. Check out that, as well as Kylie Jenner with our favorite Chanel bag of late and more, below.

Angelina Jolie has recently emerged from her Hollywood stronghold to promote her latest flick By The Sea, which she filmed during her honeymoon after she wed Brad Pitt last year. We saw her last week in LAX with a fetching tote from Alexander McQueen, and here she is in NYC carrying a brown leather Céline Classic Box Bag. You can get a better idea of what Angie likes in a handbag by mousing through The Many Bags of Angelina Jolie. 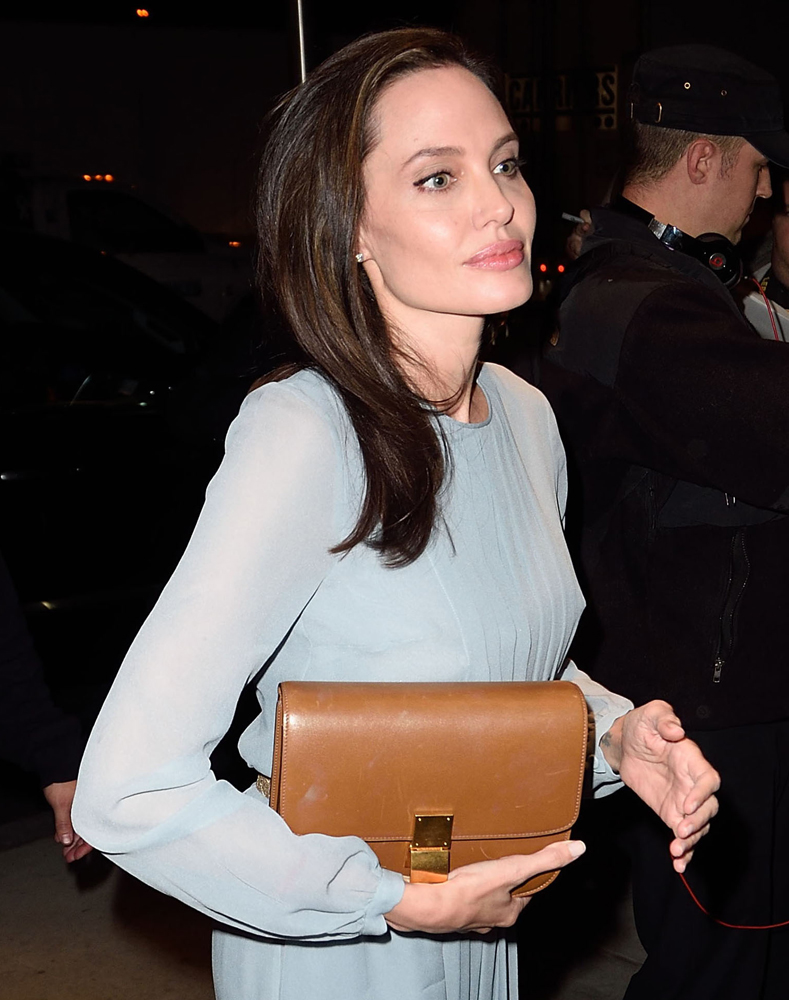 Here’s an extremely excited Behati Prinsloo, greeting the paps in NYC. She’s carrying a black leather Balenciaga Cable Bag. I’ve probably pointed this out before, but I don’t love this Balenciaga style, mainly because at first glance, it’s easily mistaken for a shopping bag. Your mileage may vary. 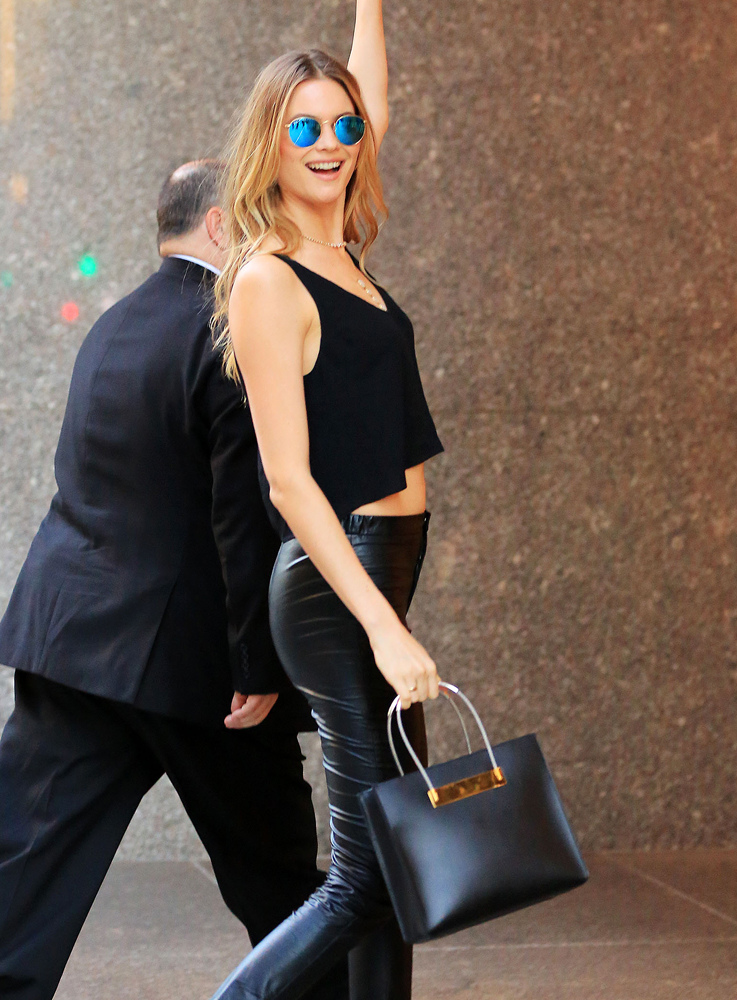 Elle Fanning has been caught in a lot of paparazzi crossfire recently because she’s also making the rounds to promote her new film Trumbo, a tale about a blacklisted Hollywood screenwriter in the 1940’s. Last week we saw her in Beverly Hills with a lush, floral Gucci Dionysus Blooms Bag, and here she is back at LAX with a Louis Vuitton Speedy. 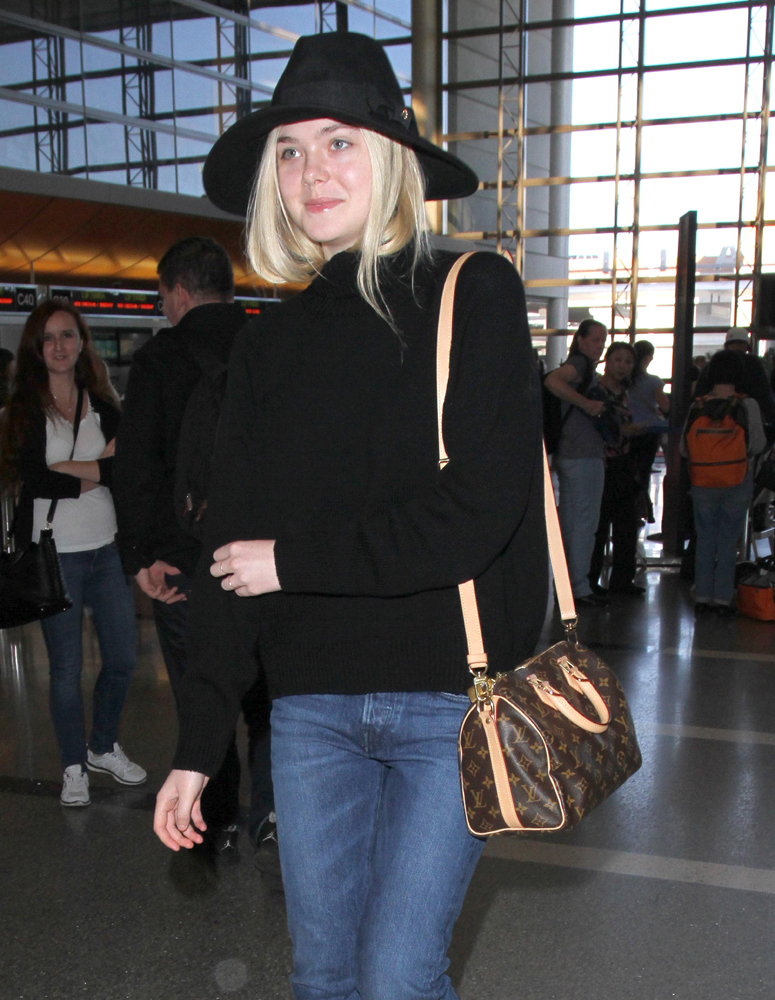 It’s Fergie Ferg! Her Fergaliciousness was recently spotted by paps while taking her son Axl to the park in Brentwood. She’s carrying an oversized Givenchy tote. Are you aware that Fergie has a new album on the way? Can you believe she hasn’t released any solo material since 2010? That’s half a decade too long for the Fergosphere. 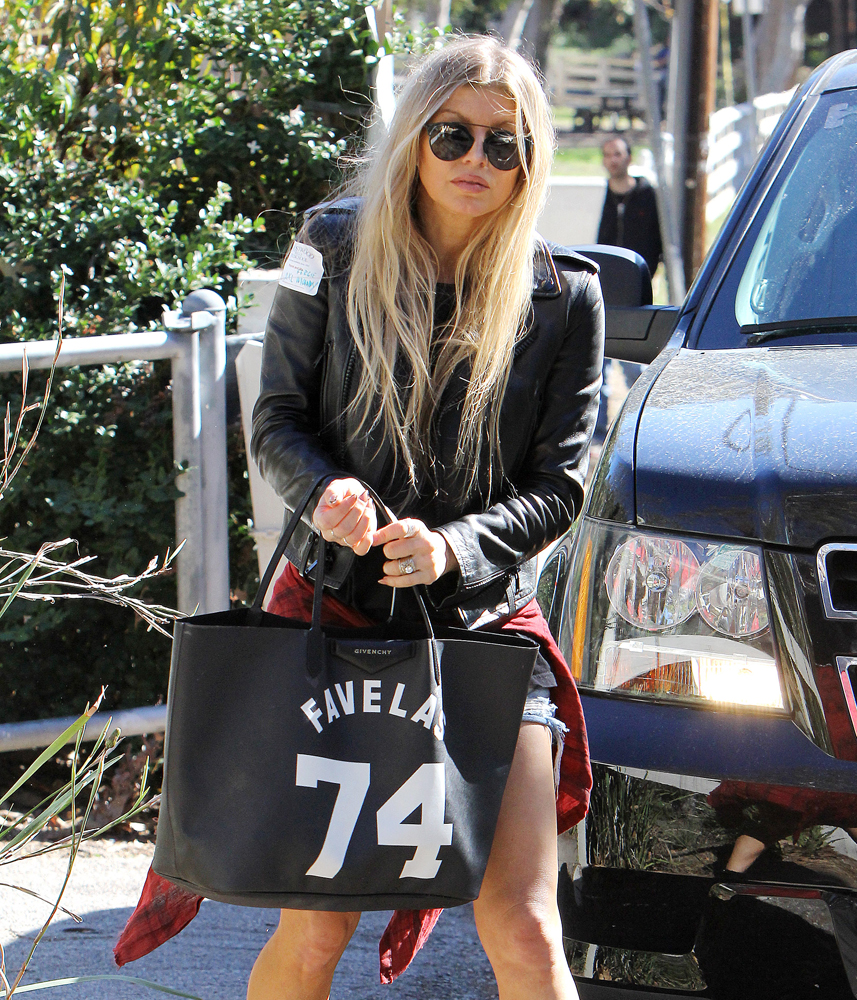 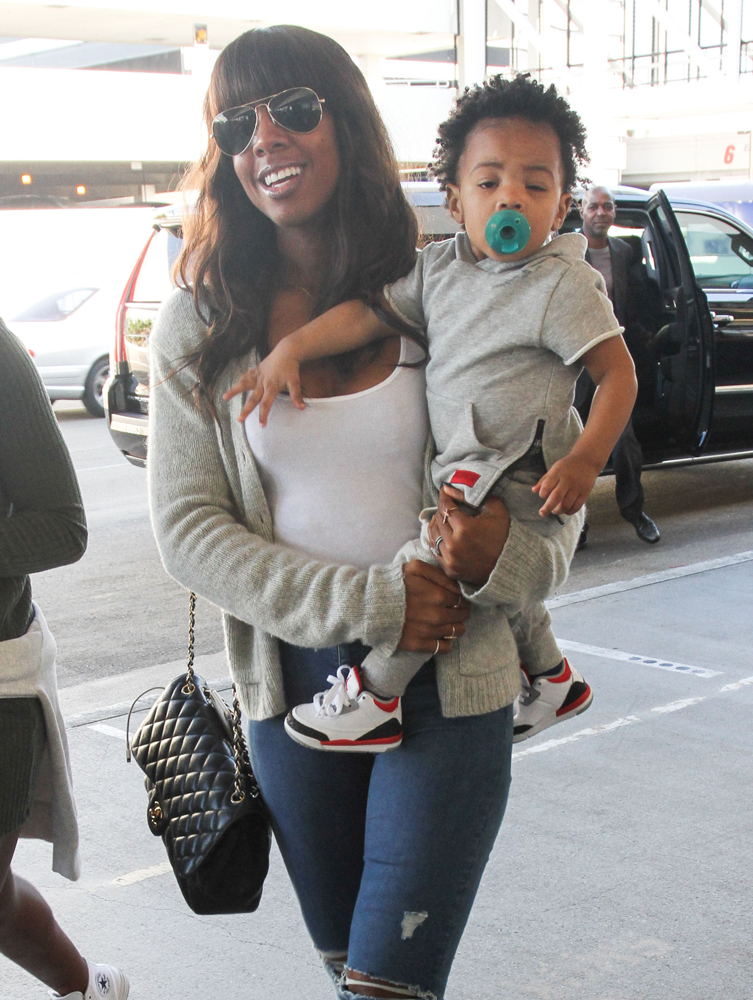 Here’s Kylie Jenner, splitting from “set” after doing a little filming for KUWTK at an LA yogurt shop. She’s carrying a lovely, iridescent green Chanel Boy Bag. This is exactly the kind of laid-back, high-end goth look I try to perfect before I head out for some fro-yo. Just kidding! Fro-yo is gross. 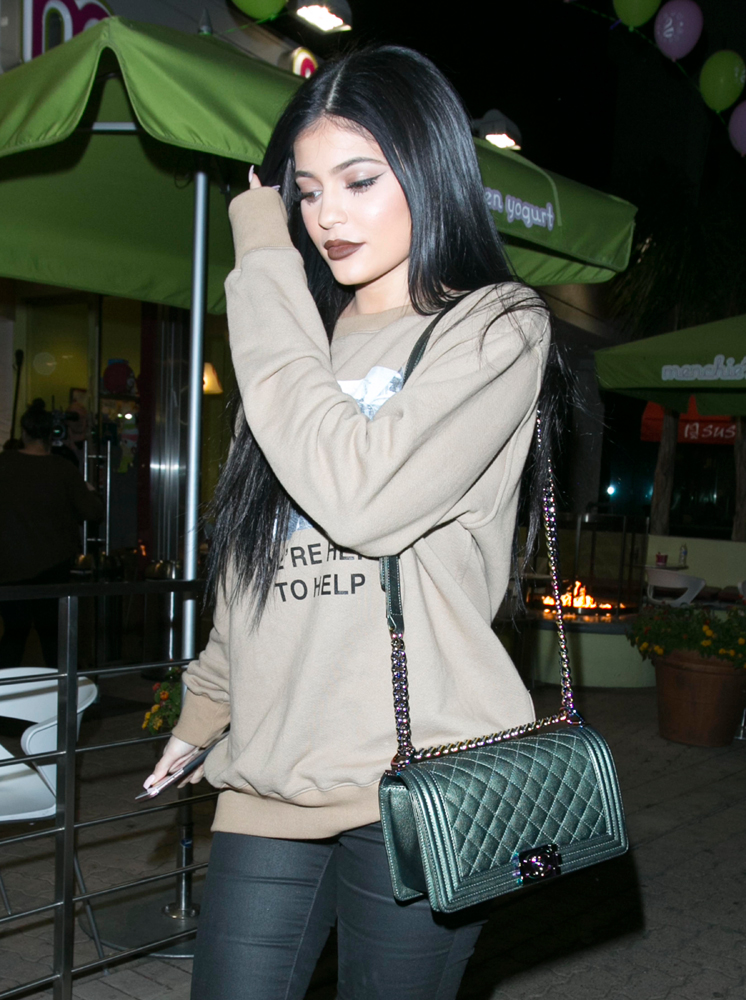 Reese Witherspoon was recently spotted out and about in Santa Monica with her latest handbag acquisition from Salvatore Ferragamo. Reese’s love of the Fiamma is well-documented; she owns at least three of them, and this black leather version is her newest. We love the Fiamma, but I’d still love to ask: Why this bag, Reese? Why this bag, out of all bags? 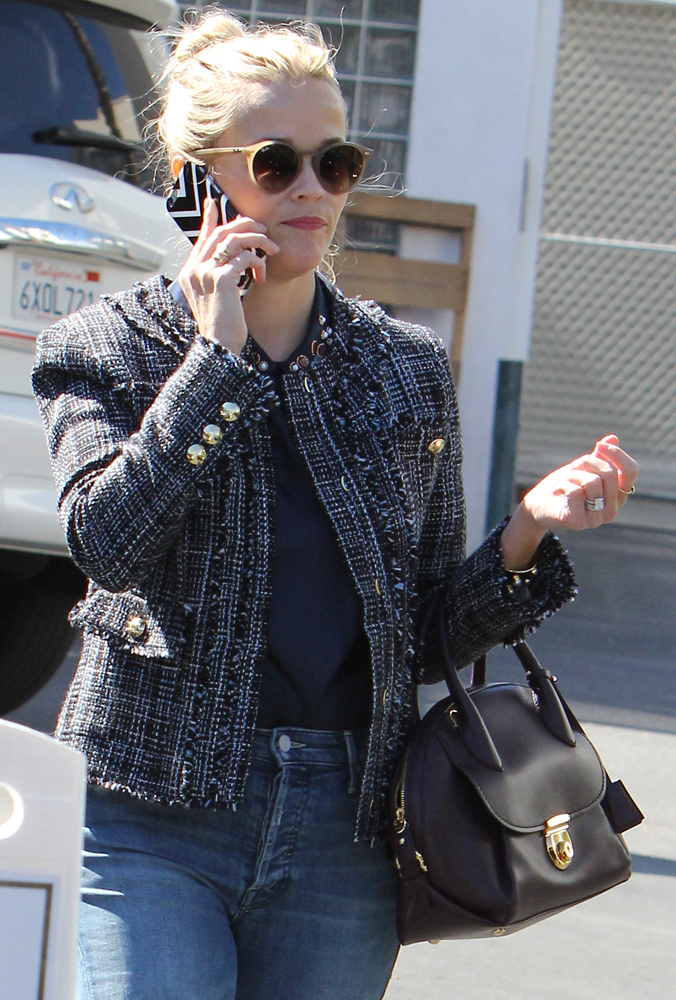 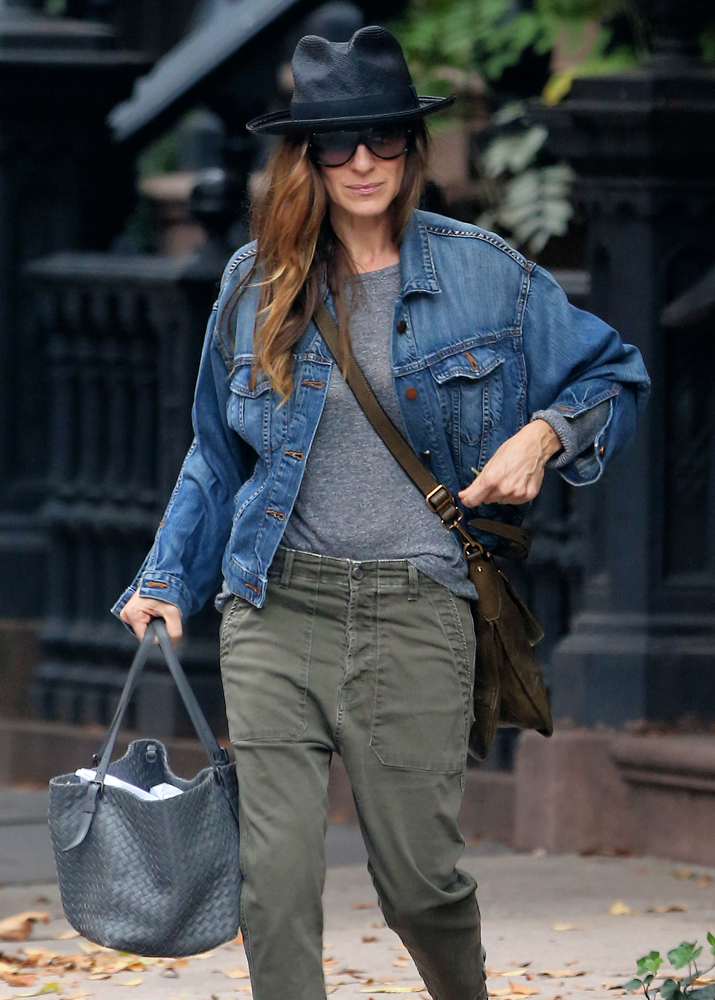 Are we sure that Reese Witherspoon paid for her Fiamma bags? Ferragamo is quite generous with supplying bags to “friends” (ex. NYC charity auctions) so maybe she got them gratis. I like the Fiamma, I’m tired of minimalist serious boxy bags. Something soft round and cute please!

It’s nice to see Reese carrying something other than Draper James at least.

Reece may have been gifted the bags

I do feel sorry for Angie’s bag! Look at the state of it…some TLC is needed ASAP.

I may be one of the only people on earth who hates Reese Witherspoon’s preppy sweet style. She looks like a perennial ivy league sorority girl.

The scratches on Angelina’s bag are enough to make me say no. I’m not sure if I’d carry a handbag with Favela written on it. It’s a Brazilian slum.

That Fiamma is nice, and she sure does have quite a few of them which leads me to believe that they are gifted to her by Ferragamo, for sure.
That sorry looking Celine box bag has got to go. Why would Angelina carry it in that condition?

I try to look after my bags but I wouldn’t judge a mother of 6 with an ambitious career for having higher priorities than making sure her bag remains pristine. While taking care of your possessions is commendable, I like that she does’t just discard bags if it’s got a few scratches.

I personally LOVE the Fiamma and once I love a bag, I almost always buy more than one version. I totally understand when on obsession starts with a handbag. Too bad it’s such an expensive habit.