When Hedi Slimane signed on to succeed Phoebe Philo as creative director at Celine the handbag world anxiously awaited his first collection. Celine fans watched and waited to see what Slimane would produce, and after debuting the top handle, structured silhouette that we now know as the 16 bag, other silhouettes joined the lineup as well.

While his bags garnered mixed reactions from many, there was one bag in particular out of Slimane’s debut collection that instantaneously caught my eye. Spotted on stars like Selena Gomez. Angelina Jolie and Karlie Kloss, the Triomphe bag has proven itself to be my favorite bag from Celine season after season. Now for spring, the classic shape has been reimagined into a small, but sleek shoulder.

While this review will be a little different than a typical Purseonals as this bag is a press sample lent to me by Celine, I was able to keep this bag for an extended period of time. This allowed me to not only feel and see the bag in person, but to use the bag on multiple occasions over the course of a month in order to provide an honest and detailed review. To make a long story short – I love the simplicity and the look of this bag immensely, but you can read my full review below for all the details!

This bag is relatively simple in design with its sleek shape, clean lines and single shoulder strap. The standout here is of course the bag’s hardware, which is not only a unique design element, but also functions as the closure on the bag’s flap. The hardware is also what gives the bag its name, and the Triomphe logo is rooted in House history. Named after the Arc de Triomphe, the inside of the double links represent two Cs. The Triomphe motif has been used for years and works well atop the bag’s simple silhouette, which also has a bit of a nostalgic feel due to the bag’s east/west baguette-like body. This bag is relatively simple, and its talking peice is the hardware. Overall it gives off a vintage vibe and due to the simple design you either love the aesthetics or you don’t. Its appeal is both classic and timeless, and personally I love the look of this bag overall.

I struggled between giving this 4 stars or 3.5, but I really felt like 3.5 was appropriate because even after using this bag a fair bit I still struggled with it some. For starters, the interior is pretty tiny, though long and slim, so you sort of have to organize your things just right. This makes going in and out of the bag on the go a bit difficult, because if you take something out you have to put it back in the same way so that everything will fit. Personally I don’t carry a lot of things at all, so even with dimensions of 8″ L x 4″ H x 2″ D I still was able to carry everything I need for the day—my iPhone X, a slim card case, lip balm, spray hand sanitizer, my keys and headphones.

When it comes to getting in and out of the bag, the hardware closure is a bit tricky and it took me quite a few tries to figure out how it worked. Again, this bag is not a great bag for getting in and out of on the go, rather it’s more of a lunch or dinner out companion, so when considering this bag it would be important to think of how you’ll use it. It’s worth noting that the bag fits really nicely worn over the shoulder and is super light in weight even when full. 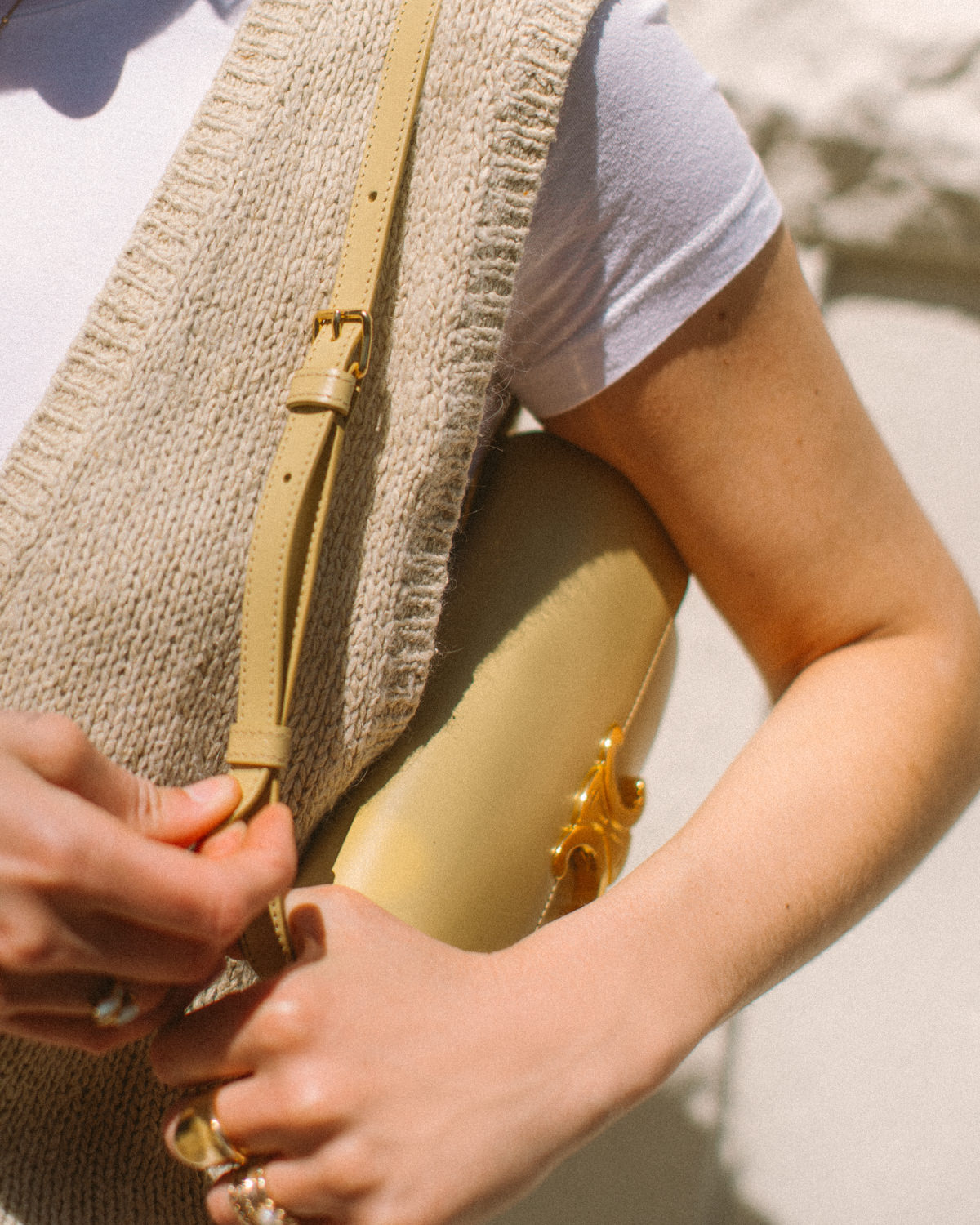 It’s important first to mention that this bag is a press sample, and press samples often get a lot of use as they’re sent off for use time and time again. This bag however showed very little signs of wear, and even after using it extensively for a month it still looked new. The leather is strong and sturdy but still soft. Its shiny calfskin finish has the smallest bit of texture and I like that the leather doesn’t crease at all on the back of the flap even after going in and out of it time and time again.

The bag is crafted from calfskin leather and it’s lined in lambskin leather, which is a pretty lovely touch when nowadays many bags are lined in fabric or microsuede.I don’t own a Celine bag (yet) and I have to say sample or not, I was very impressed with the construction of this bag overall. Because of the vintage appeal and extremely well made body, I can see this bag remaining a beloved part of one’s collection for years and even passed down through generations. I couldn’t give a full five stars however because I did baby this bag a bit more than I typically would since it wasn’t mine to keep.


This bag is really luxurious and to me it looks expensive. And while prices of designer bags have become astronomical, making $2,200 sound reasonable in the grand scheme of things, it’s still a lot for a small bag. This is not a bag that you’ll likely use everyday which does make the price point not as accessible as one might hope, but I still gave 4 stars because the quality of the bag warrants it. Like I mentioned above this seems like a bag that you’ll have (and use) for decades to come, which makes $2,200 sounds a bit better in my opinion. 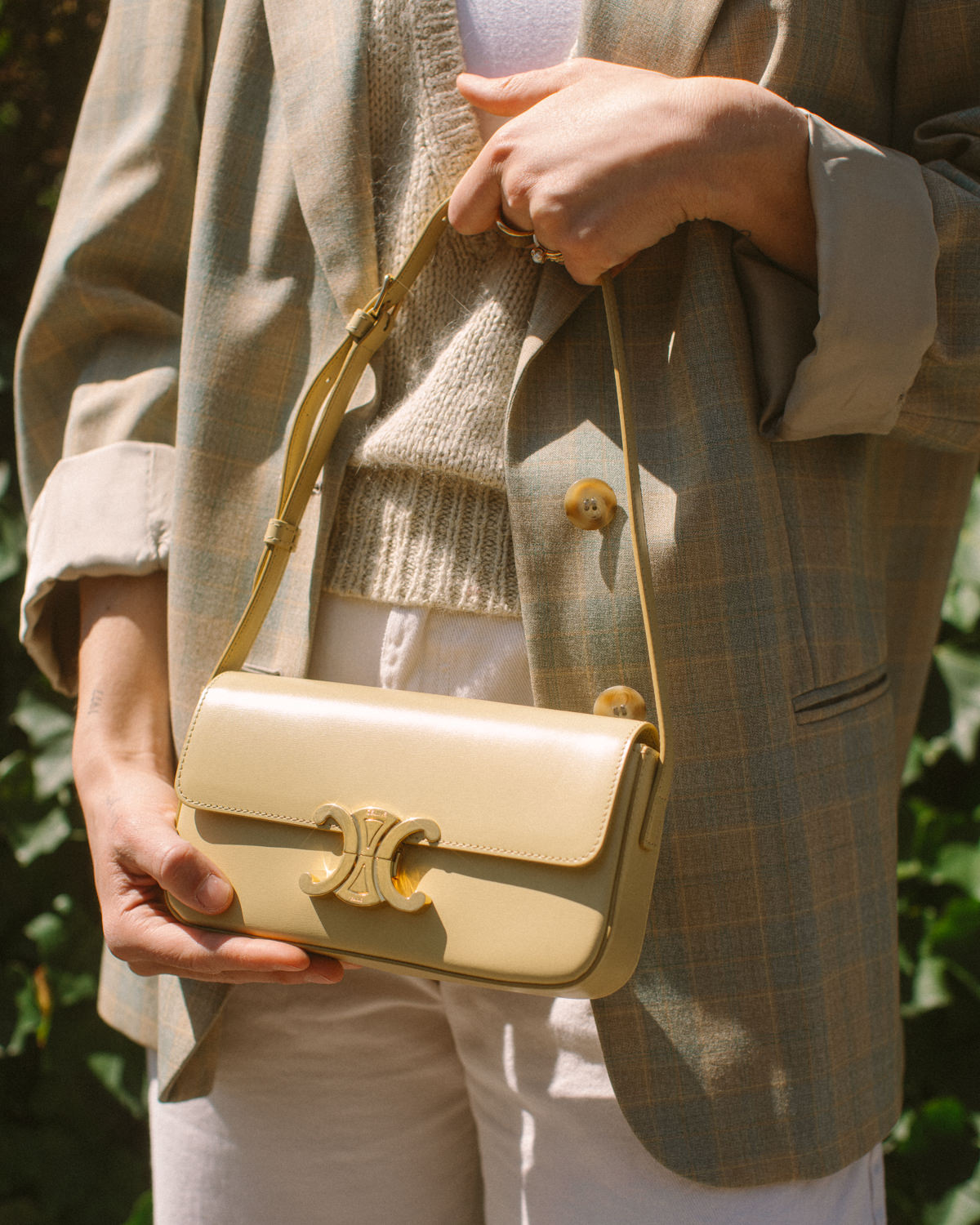 While this bag is a Celine by Hedi Slimane original, dating it to a certain time period that will inevitably come to an end, its main design element is rooted in House history. Other than the main Triomphe hardware, the bag lacks any garish logos or overt branding and unless you know Celine you don’t know this screams Celine. The silhouette already feels timeless and classic, but the shape doesn’t scream old or boring. Though this bag has only been around for a couple of years, it was one of Slimane’s debut bags and has been reimagined season after season.

The Celine Triomphe Shoulder Bag is a bag that is not to be overlooked, despite the flood of It-Bags from other brands on the market right now. It’s not only timeless in shape but its quality is impeccable and it is on trend thanks to the shape’s vintage appeal. However it won’t be going out of style anytime soon. In shiny calfskin it is both beautiful in look and feel, and the neutral buttery-yellow hue of this bag will work well with most wardrobes. Purchase via Celine for $2,200.

I don’t like this shape. As mentioned, you have to arrange your stuff JUST right for it to fit. I prefer shorter, wider bags (like Chanel mini). Then wallet, phone, keys, etc can lie next to each other.

I like this bag more today than I did when it came out, but I feel like the sustentations hardware will date it in a way that will ultimately have me still preferring the box I a few years time

No matter how hard Celine tries with this beautiful hardware and how historic it is, it’s really hard not to see a double C for Chanel. I think Celine is at its best when it produces more minimal—yet sophisticated—designs. There is nothing wrong with this bag, and you wear it well by the way, but I would never buy it.

It’s too similar to the Chanel logo. Why is no one talking about this obvious similarity. The fashion industry is so fake.

Celine made a baguette.

I cannot carry this kind of bag these days. It is not enough space for Phone, card case, wipes, tissue, masks, hand sanitizers and so on. These things are a must to be always with now.

I graduated from blingy hardware some time ago. I prefer hardware that is not too shiny.

I recently bought the Triomphe medium in monogram canvas. I absolutely love it. The size is perfect—it holds more than you might imagine—and fits very comfortably crossbody.
I myself would not purchase this smaller horizontal version. (I only spring for designer bags if they can be used every day.)
Regarding the hardware. I too was concerned it would be too shiny and flashy, but it’s actually quite muted and elegant in person. Agree with the review that the quality of this bag is top-notch.

It’s cute. Tried to make it an option while shopping for a new bag the other day but Celine at Saks didn’t have it. It was on “deposit only” which I don’t see why. Ultimately I ended up going for the Givenchy Cut Out in black box with a gorgeous lock strap. THAT is another story…

Too small for practical use

such a beautiful color