Can Counterfeit Bags Make You a Bad Person? 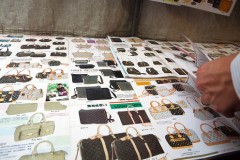 The subjects of what kind of person buys counterfeit bags and what buying counterfeit says about a person have, admittedly, been discussed to death. On our forum and in other places, both the fake haters and the fake lovers have very, very strong opinions. People in this debate seem to get offended quickly and take the choices of the other side personally. Fake buyers think that real buyers are fashion-industry dupes; real buyers think that fake buyers are cheapskates that want everyone to think they’re rich.

The issue of counterfeiting is rife with the problems of legality, intellectual property, socioeconomics, and conspicuous consumption. Great thinkers like Jean Baudrillard have struggled mightily over the value of authenticity, the role of the replica, and what said role says about the society which embraces it. Handbags are obviously only a part of the overall authenticity question, but when Louis Vuitton can increase earnings even in a global recession, they might be a part worth considering with increased seriousness.

And that’s exactly what Duke and MIT researcher Dan Ariely did.

For all the chatter and hand-ringing over black-market handbags, there’s been very little, you know, SCIENCE conducted. And most of what has been done has been research concerning how this black market (just like every other black market on the planet, duh) contributes to more intense kinds of crime, like drug and human trafficking. As with most things, though, fake handbags probably tell you more about how someone views themselves than how they view white slavery (consumers of all sorts of goods tend to put global issues out of their minds when it comes to buying useless crap that they just HAVE to have). So, sure, buying fakes is indicative of certain attitudes. But once someone is in possession of a counterfeit bag (or sunglasses, or whatever), can it change the way they view themselves and, therefore, how they act in other morally dubious situations?

That’s what Ariely set out to test. After receiving his first designer item, a Prada messenger bag as a thank-you for speaking at a conference, he was surprised at how different he felt when carrying it, even though he kept the logo turned in so no one would notice it. He hadn’t considered himself a clotheshorse in any way, and he found the power that his real Prada bag had over him kind of disconcerting. So, he decided to do a series of studies to find out if the possession of real or counterfeit designer goods would make test subjects act differently.

That particular study has its flaws – no control group to be found, for example – so it’s hard to say whether the the designer goods made the real group play up or the fakes made the replica group play down. With such a huge difference, though, you’ve got to think that it was a bit of both.

Both of these studies seem to indicate the same end result, and it’s a result that’s been replicated across human behavioral studies that otherwise would have nothing to do with the counterfeit industry. The first time a person violates his or her own moral code is the hardest; subsequent violations are much easier. In both of these situations, that initial violation was the possession of an illegal replica item. Whether the second or third violations were cheating on a test or possessing more illegal items, it appears that the first move to dubious ethical ground makes those later actions much easier for many test subjects.

What I think is most interesting, however, is that this study seems to confirm a lot of people’s criticisms of those that buy fakes: that they’re essentially comfortable with deception and unconcerned with the ethical ramifications of their choices, as long as they like the end result. Perhaps a bit of harsh criticism for something as simple as a handbag, but far too often people forget that every choice made says something about the person making it.