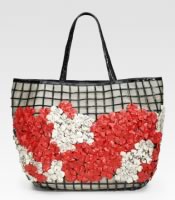 If ever there was an excellent example of why almost no one can pull off the intricacy and texture that has become a hallmark of the Valentino accessory aesthetic, it’s the Nancy Gonzalez Crocodile and Whipsnake Floral Tote.

I’m not say that this bag is bad, because I really don’t think it is. It’s also not great or particularly inspiring, in the same way that Valentino bags usually are. A poor choice in coloring has sacrificed some of the bag’s visual texture, and despite the fact that I respect where the designer was going with all of this, I don’t think she ever got there. 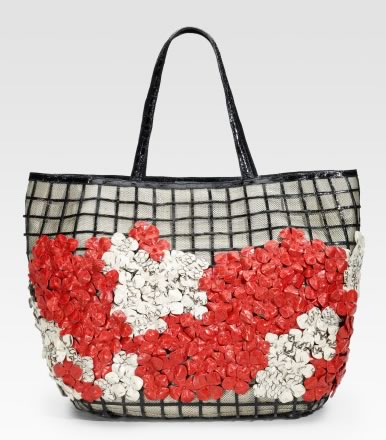 The way that Gonzalez chose to group her flowers is just sort of…splotchy. Either they need a lot more variation, or they need to be all one color – either way would highlight all of the great texture that they provide. As it is, all you notice are the stark lines that separate one color block from the next, and the subtlety is lost.

I also disagree with the decision to use a woven tote as the background for the flowers instead of leather. It may have been chosen with the intent of mimicking basketry, but even for a bag with such high-end embellishment, it’s hard to justify the price in my head when most of the bag isn’t made out of leather. It’s a solid effort with a few fatal flaws, and a solid reminder that no one does flowers and texture like Valentino. Buy through Saks for $2995.