Can the Michael Kors Vivian Satchel Convert New Fans to the Brand? 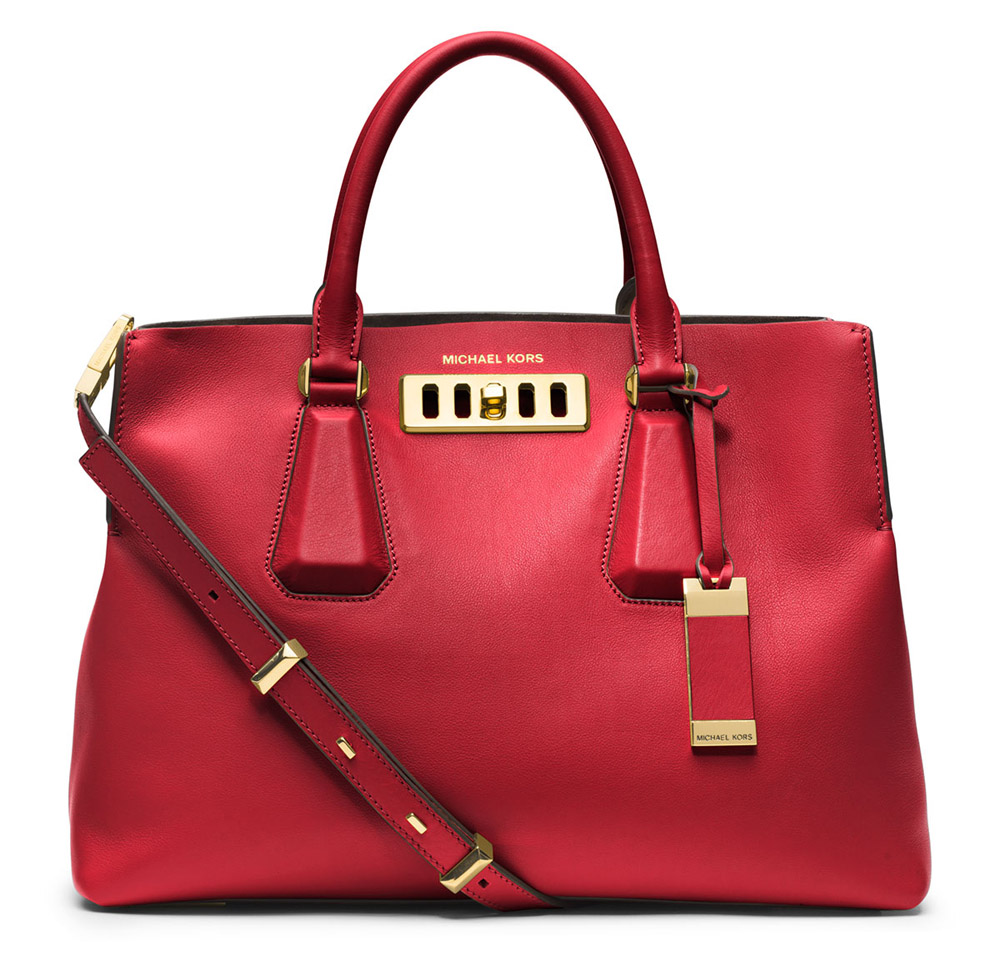 Last week, while we were discussing celebrity handbag placements, one of our comments mentioned the Michael Kors Vivian Bag and her budding interest in it. Her timing couldn’t have been better; I’ve been looking at the brand new Vivian line for a couple of weeks now, and the more I do, the more I like it.

Perhaps because of its ubiquity (and also perhaps because of some of the customers stereotypically associated with the brand’s logo-bedecked diffusion line), Michael Kors tends to inspire opinions on either extreme of the Handbag Feelings Continuum: people love Kors and everything his sporty version of luxury stands for, or they loathe his brand with a tenacity that would frighten most pit bulls. In many ways, either reaction is a win on Kors’ part; it means that he has created a vision that is both specific enough and popular enough to bother people.

Kors has a unique challenge in selling bags that cost more than a thousand dollars, though. The lower-priced MICHAEL Michael Kors brand is so well-known for its bags and so aesthetically similar to Michael Kors Collection that it tends to make upper-tier consumers a little wary. After all, anyone paying that much for a bag wants to make sure that the brand itself can provide value.

The Vivian, along with the Miranda tote before it, can potentially do some important work to differentiate the lines and create accessories value. Kors is particularly adept at getting his bags onto celebrity arms, so that is surely ahead for the Vivian, but it’d be hard to effectively argue that this isn’t a pretty nice-looking handbag without any hype at all.

It owes a debt to a few other nice-looking handbags, to be sure. The overall look feels Prada-inspired, and the unique hardware reminds me of that of the Proenza Schouler PS11. It’s hard to find any new bag that doesn’t feel at least a little like some other, not-so-new bag, though, and the relatively sane price tag on this bag will make it a more likely wear-to-work option for a lot of women.

Are you into this bag? Let us know in the comments. If the answer is “yes,” pick one up for $1,295 via Neiman Marcus.

When I just looked, there was only one left on the website! I like the contrast between the chunky gold harware/structured handle attachments and the slightly unfinished-looking edge of the leather at the opening. Not exactly my personal style, but it’s a very nice bag, and I predict it’ll be a big seller.

I’m so glad you did this and I agree with much of your assessment, which is why I was wondering what others thought. While I like the bag (and it also reminds me so much of the Proenza Schouler hardware!), I’m also hesitant regarding the price point. I understand that it is Collection, so of course, it has to be priced as such, but I can’t help thinking I’d rather wait for it to go on sale because I just don’t know if I’m willing to part with that amount for a Michael Kors bag…. After all, the Miranda has been marked down in an assortment of colors and materials at different retailers and I’m sure the Vivian will follow. I think it’d be different if he never did price markdowns and if the ubiquitous MICHAEL line didn’t eat up so much of the market. I’ll still probably end up owning one, just a past season style. It is a lovely bag though!

ooooh, I have GOT to see this one in person! That leather looks so yummy, esp in the Desert also sold at NM. Nice silhouette and gorgeous hardware plus the really awesomely organized interior. Along with a jillion others, I am the happy owner of Kors’ Selma in that lovely Pearl Saffiano leather, but I have not really looked into his line in depth. I got a screechingly good deal on Ms Selma from Nordstrom, maybe luck will strike twice, with Ms Vivian … 🙂

Lately it’s the only bag that I really like! the design is perfect. But dont know if Im able to by a MK bag! I dont like the brand. I want to wait to see it in the store. But im sure that I I won’t buy it.

The pricing of MK is great but the turn off for me is their logo is always way too big and (I think) often in metal hardware letters rather than embossed. They have to tone it down a bit. Also I find they go hard/structured where they should go more soft, like the Vivian’s handle placement looks too 3D. And their hardware always looks off in terms of the shape and scale relative to the bag. Minor tweaks would make me an MK fan but for now I’ll pass. I’d get a Selma if it weren’t for the logo. The Vivan’s leather and slouch however are yummy, especially in the red.

Not a huge fan. I see elements copied from many other designers: Proenza Schouler, Prada, Givenchy to name a few..

I’ll never get the draw of MK, to me his aesthetic is so boring and uninspiring. And calling a $1295 price for a handbag sane, is INSANE.

My Uncle
Riley got an almost new red GMC Canyon just by some parttime working online
with a laptop. visit their website F­i­s­c­a­l­p­o­s­t­.­C­O­M­

Most forget that Michael Michael Kors is his diffusion line. I found that out the hard way when I wanted one of his dresses from off the runway. It was $995 at Saks. The bag is gorgeous, and I love this red. The price for his high end line is not unreasonable in the grand scheme of things. This LEATHER bag is still cheaper than Stella McCartney’s FAKE leather bags.
And, like I’ve said many times, no one is really doing anything new. Even the third tier designers are copying the high end. Nine West has a bag that looks like a Celine.

i think what turns me off the most is the gold turnlock bar. the gold strap holders are a nice touch though. but i think no matter how nice MK bags are, i wouldnt spend my money on them 🙁 my fave MK bag design has got to be the selma. i think it is the perfect bag within that price range. from the shape and proportions to the saffiano leather, i think its an instant classic. but no matter how much i love the design, i dont love the brand. probably i’m just biased 🙂