Marc Jacobs proves that sometimes too much really is too much 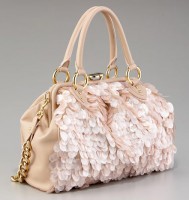 In general, I think that phrase “too much is never enough” is useful when trying to explain certain sectors of fashion, particularly to those who aren’t interested in the industry or in understanding the genius of fabulous fashion eccentrics like Anna Dello Russo or Daphne Guinness. Rococo is always alive and well somewhere within the style world, even during harsh economic times, and its exuberant resilience is to the industry’s credit.

Sometimes rococo runs headlong into a wall, though, as with the Marc Jacobs Large Sequined Stam. I like the Stam bags (I even have one from way back in the second season that they were around), I like sequins, I like the blush-nude color that we have going on here. But unfortunately, the end result is less than the sum of its parts. 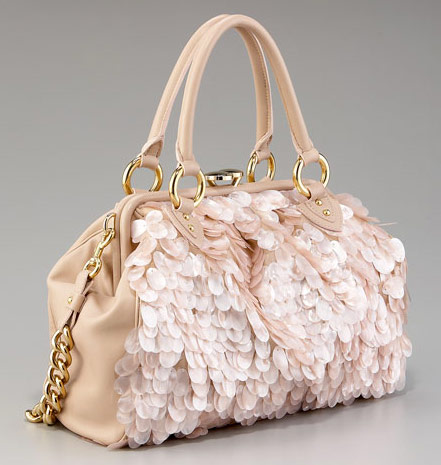 As you can probably guess, my main gripe is with the side of the paillettes. They’re enormous, far too big for something the size of a regular handbag, and they give the bag a very South Florida-grandma-at-the-retirement-home feel. Part of that may also be caused by the color, but with smaller sequins, the effect would have been more high-end and elegant. I can see the spirit of fun that probably went into this bag, but the idea just doesn’t work out as well in practice as it might have on paper. Buy through Neiman Marcus for $2350.

My wife would love this bag (ipad)

i don’t think it looks that bad or even that over the top. the neutral color is what saves it. that being said, i wouldn’t buy it. (ipad)

I think if they took all that froo froo off it would look great! (ipad)

I think on the right person wearing the right outfit this just might work. It’s definitely not my style but at least it’s not boring! (ipad)

The pailletes are a bit over the top. The bag would have worked much better if they were done in tiny sequins. The leather color is beautiful.
This is unfortunate because the Stam is on my wishlist.

The problem with bags like this is when the details falls off. It would make the bag look incomplete. (ipad)

I would be afraid of getting it wet!! (ipad)

I think it will be better is it’s with smaller sequins!!