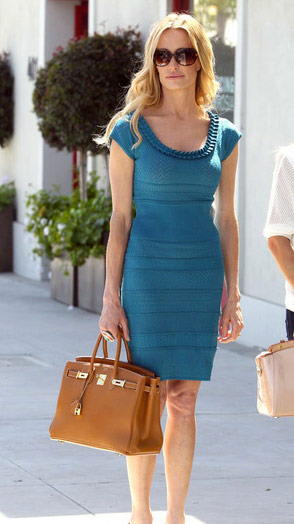 It’s not often that our Real Housewives coverage and our handbag coverage intersect, but sometimes when a reality TV star finds herself in financial straits, the stuff in her closet is all she has left with which to barter. (Side note: Why do people in financial distress find themselves so attracted to television? Bravo doesn’t pay that well.)

That’s apparently what happened to Taylor Armstrong of Real Housewives of Beverly Hills fame, who recently settled a lawsuit that had been brought against her and her late husband Russell over allegations that they defrauded MyMedicalRecords.com for over $1.5 million while they claimed to seek funding for the company’s growth. Because Russell hanged himself last year and the truth finally came out about the couple’s financial situation (they were flat broke, they had few liquid assets and they rented their massive home), Taylor had to turn over her personal property to work toward fulfilling the settlement. That included some of her handbag collection, but as it turns out, the Birkins were all as fake as her lips.

The information released about Armstrong’s situation doesn’t explain exactly how the Birkins were determined to be fake, but Styleite reports that MMR’s CEO Robert Lorsch considers the lawsuit settled as a result of the forfeiture of Taylor’s engagement ring, worth about $250,000. So what’s the deal with Taylor’s Birkins? I guess that depends on what you think of Taylor and her relative propensity to tell the truth.

On the one hand, the bags may have been gifts from her husband, a noted grifter and spousal abuser who certainly wouldn’t have been above lying about where he got a handbag that was supposed to be not only a status symbol for his trophy wife, but also proof of his own financial prowess to all of their friends. In that scenario, perhaps Taylor didn’t knowingly seek to defraud MMR. For the second time, in case you’re counting.

Or maybe Taylor knew they were fake all along, which is probably the compelling scenario if you think Taylor was complicit in all of her husband’s fraud. She certainly seems to have been highly involved in some areas of his business dealings, and even if she does claim that the bags were gifts of unknown provenance, I’m not sure I or anyone else will believe her. And considering that Taylor just tried to bilk him out of more money, this time with fake bags, Lorsch’s statement that he considers the matter closed seems…generous.