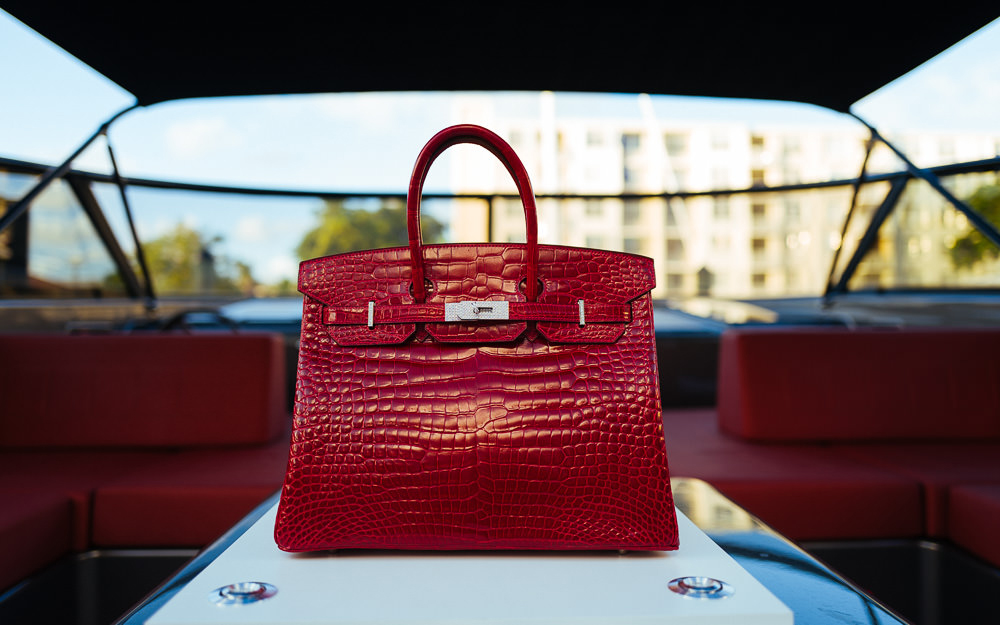 It was just last June that we reported to you about a new high in handbag resale prices: Christie’s Hong Kong had just sold a pink crocodile Hermès Birkin for a record high of $221,000. That record didn’t even make its first anniversary; earlier this week, Privé Porter announced it had broken that record with a $298,000 Birkin of its own, and it’s one that will look familiar to PurseBlog readers.

Privé Porter is a resale business that focuses on unused (but previously owned) Birkins and operates primarily via Instagram, where it’s able to reach a worldwide audience of shoppers looking to add rare handbags to their collections. In November, Privé Porter hosted a pop-up Birkin yacht at the Fort Lauderdale International Boat Show, and Megs and Vlad were among the attendees who got to peruse the collectible Birkins. The new record-breaker was among the bags in the selection, and it appears in our photos of the event, including the one above.

The bag is a 35cm Birkin in Braise shiny Porosus crocodile, finished with 18-karat white gold encrusted with pavé diamonds, at a total weight of more than ten carats. It was manufactured in 2008 and sold to a US buyer via the brand’s New York City flagship on the Upper East Side of Manhattan. Privé Porter acquired the unused bag from the original owner in 2015, and it was purchased from the company by a Los Angeles-based buyer who chose to remain anonymous. The Christie’s bag can still technically claim the title of the most expensive handbag sold at auction; this Birkin sold at a named price with no bidding.

We spoke to Privé Porter co-found and Managing Director Jeffrey Berk, who had this to say of the bag and its sourcing process: “Even with the sheer volume of Birkins we’re offered daily, we are very careful about the bags we actually buy. Is the color special? When was it produced? How rare is it? But we knew that when we had the opportunity to acquire this Braise Croc, we’d stumbled upon one of the special Birkins, the way a horse trainer may see a newborn and know that’s a Triple Crown winner someday. We hoped to sell it to someone who appreciated the bag as much as we do, and from what we understand, the buyer is a very sophisticated collector who genuinely understands how special and rare this bag is. Which is reflected in their willingness to pay the record price.”

Hermès reds and pinks are particularly sought-after shades for collectors; a Rouge H (which is a bit deeper than braise) Birkin set a sales record of over $203,000 back in 2011 via Dallas-based Heritage Auctions, and the most recent record holder from Christie’s in Hong Kong was bright pink. Recently, handbag resellers have been trying to convince the buying public that Birkins are a better investment than stocks or gold bars, and if you’ve got a red or pink croc Birkin at the ready, that just might be true.

Do we know how many of these Braise Crocs were produced? I’m sure Hermes is tight-lipped with that kind of information, presumably so people will assume rarity without full information.

So I wonder which Kardashian bought it? ;o)

Kris Jenner’s Midas touch will cheapen even this one.

I live in the bayous of Louisiana and I’m sorry but unless this particular croc knew how to play the fiddle and dance the tango, there’s no way a lizard skin is worth this much. Gators and crocs make fine bags but at the end of the day they’re giant lizards, diamond encrusted or not.

Why is no one talking about the 450k diamond himalayan that sold on 1stdibs this week?

Reaching out to them for confirmation/comment. Do you have a link to an article about that sale?

I’m not a huge Hermes lover BUT this sale just proved hands down that purses are an amazing investment! AND no capital tax gains unlike stocks!!!! A HUGE mazal tov to the seller!!

I’m pretty sure this was on display in the Vegas store about four years ago…. Very tacky, it takes a lot for me to say that about Hermes!!

I’d love a Kelly and Birkin someday but these prices are insane! I say if you can but it responsibly why not?! Just hope these are some multi millionaires/ billionaires..

With all the poverty in this world it is obscene that anyone would spend that much on a bag. Just because you can, doesn’t mean, you should. This is more than the average person makes in 5 years. No wonder the self-centered buyer wanted to remain anonymous. Was a $5k bag too cheap for them? They should be ashamed of themselves. That aside, that is one hot bag. I still wouldn’t pay that much even if this was my universe

I agree, this is so tacky.

I agree. It’s dumb that people value a handbag this much. A handbag should never be priced so high let alone buy it

Really, this story could be completely ascribed to PR. It may give many the impression that the lesser priced bags are worthy investments by association. A single sale hardly supports the idea that handbags are some sort of financial instrument. (Yes, I know there is some money to be made reselling certain bags.) Maybe Hermès bought back their own bag.