Hermès Opens the Madison Flagship with a Party to Remember

A new NYC Boutique brings out the very best Hermès has to offer!
12 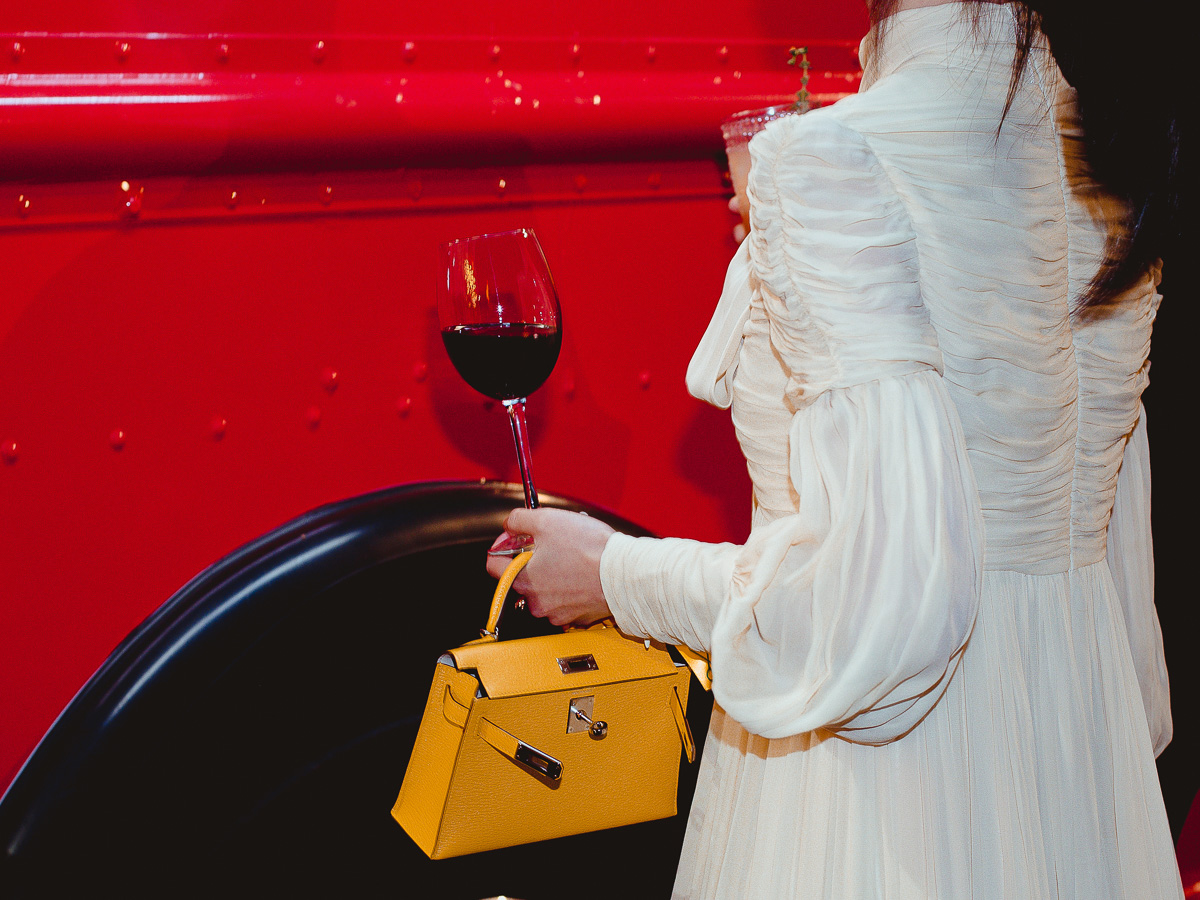 On Thursday, September 29, Hermès finally opened the doors of its new Flagship boutique at 709 Madison Avenue, halfway down the block from the former location at 691. With it came much fanfare, drama, joy – and, as the dust just begins to settle from the whirlwind surrounding the opening – perhaps a sense of the future of Hermès as the company continues its expansion and depth during its 187th year. 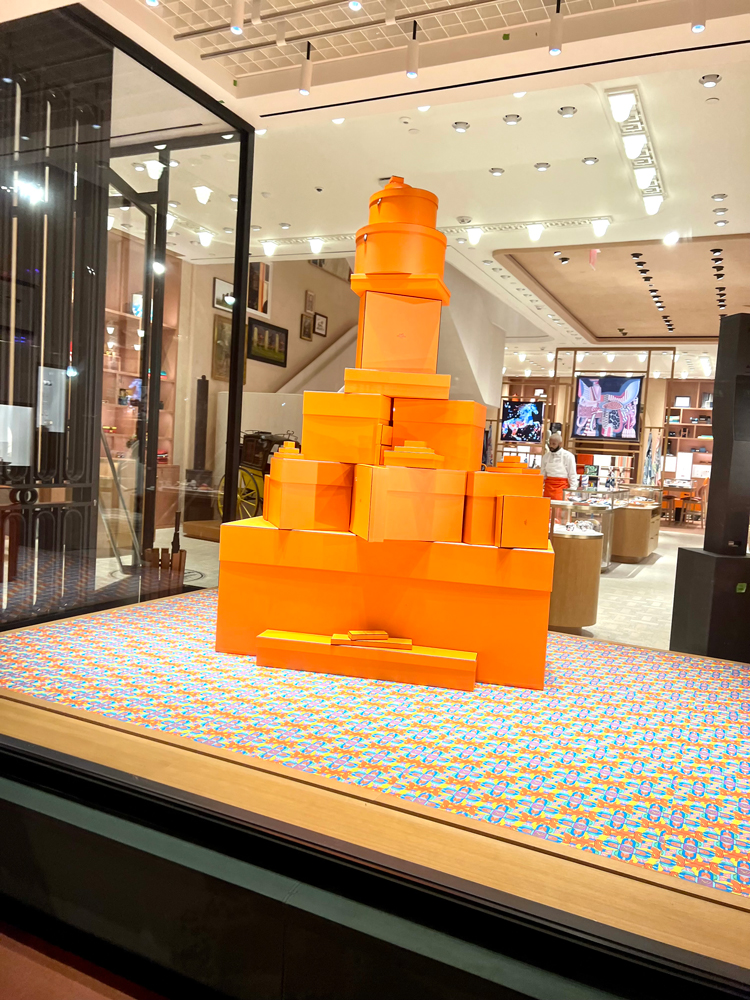 One of the main boutique windows on opening night. Photo via @The_Notorious_Pink.

This was no usual store opening; indeed, while the Flagship has now been consolidated back to one boutique (after the prior move from 57th Street in 2000, the Men’s boutique was located across the street from the main store), the expansion, which now encompasses 20,250 feet of retail space in addition to several floors for offices, craftspeople, and storage (for a total of approximately 40,000 feet), was welcomed with an exceptional array of fanfare and a spectacular celebration attended by numerous celebrities and VIPs, including Martha Stewart, Grace Coddington, EJ Johnson, and Nicky Hilton, all to an estimated expense of several million dollars just for opening night. 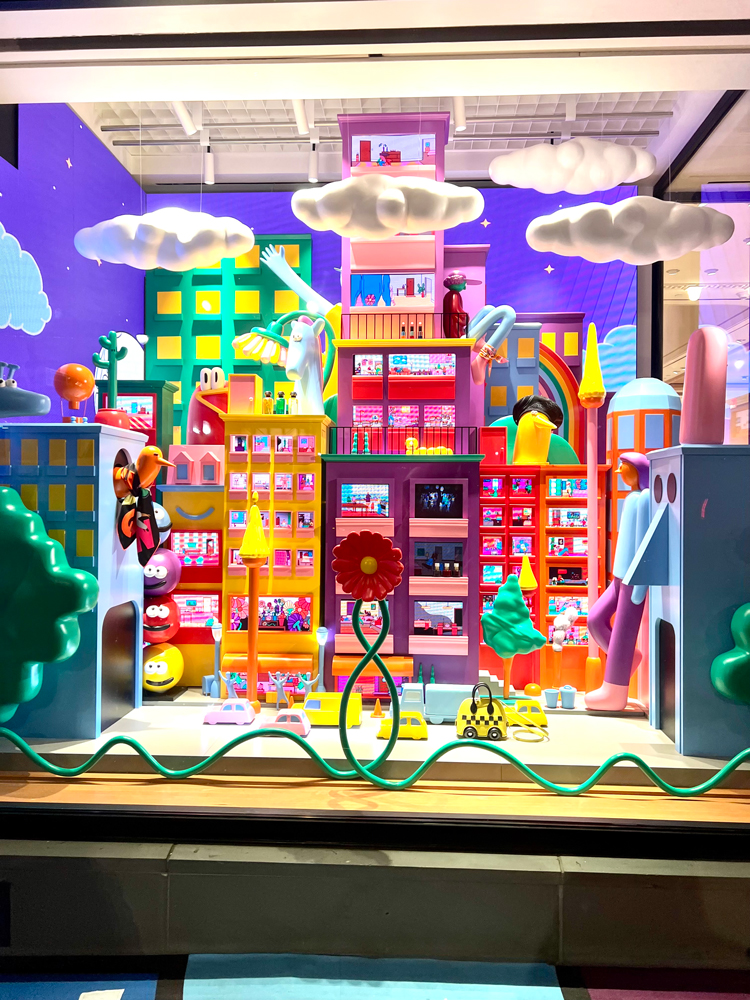 The spectacular window of the new Madison Avenue Hermès Flagship. Photo via @The_Notorious_Pink.

Guests were invited to enter at various times from 7:00pm onwards. They were greeted with beverages and a store-roving Broadway-style musical titled “Love Around the Block,” which was, in fact, a complete theatrical production with a meta-plot involving the “perfect” store opening. The performers were engaging, wonderfully entertaining and, indeed, perfect in such an intimate and unusual setting. Wine and cocktails were offered at every turn. “Love Around the Block” on the second floor. Photo via @The_Notorious_Pink. 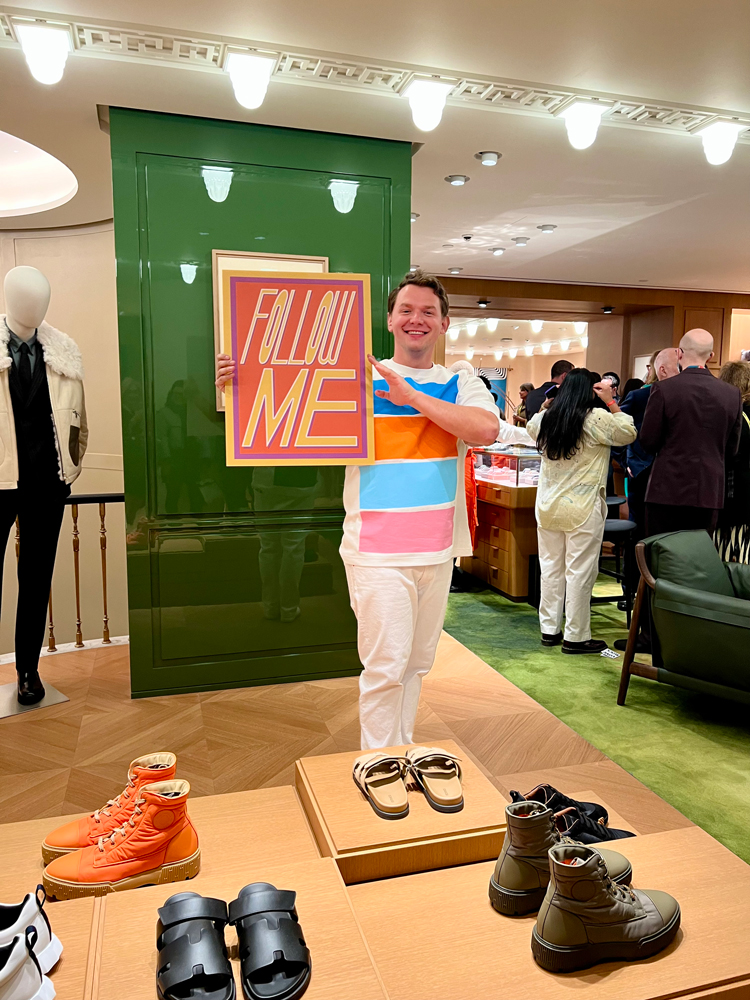 Guests were moved throughout the new boutique to follow the show. Photo via @The_Notorious_Pink.

As the show moved throughout the new boutique, guests were invited to follow along through the performance until all were (quite cleverly) brought outside to the closed-block party on the street, featuring covered seating and an array of beloved NYC food trucks, including Katz’ Deli, Junior’s Cheesecake, Hot Dogs, Tacos, Pies, and much more, and a spectacular finale on a stage set up on 62nd and Madison by the now-former Men’s boutique. 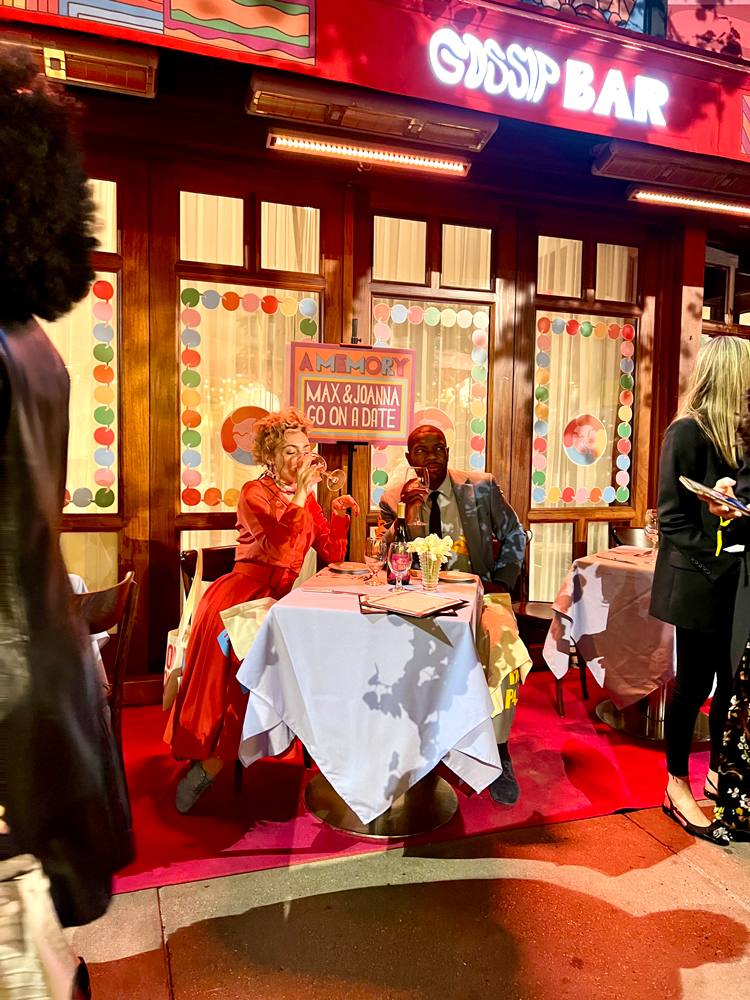 The show continued outside. Photo via @The_Notorious_Pink. 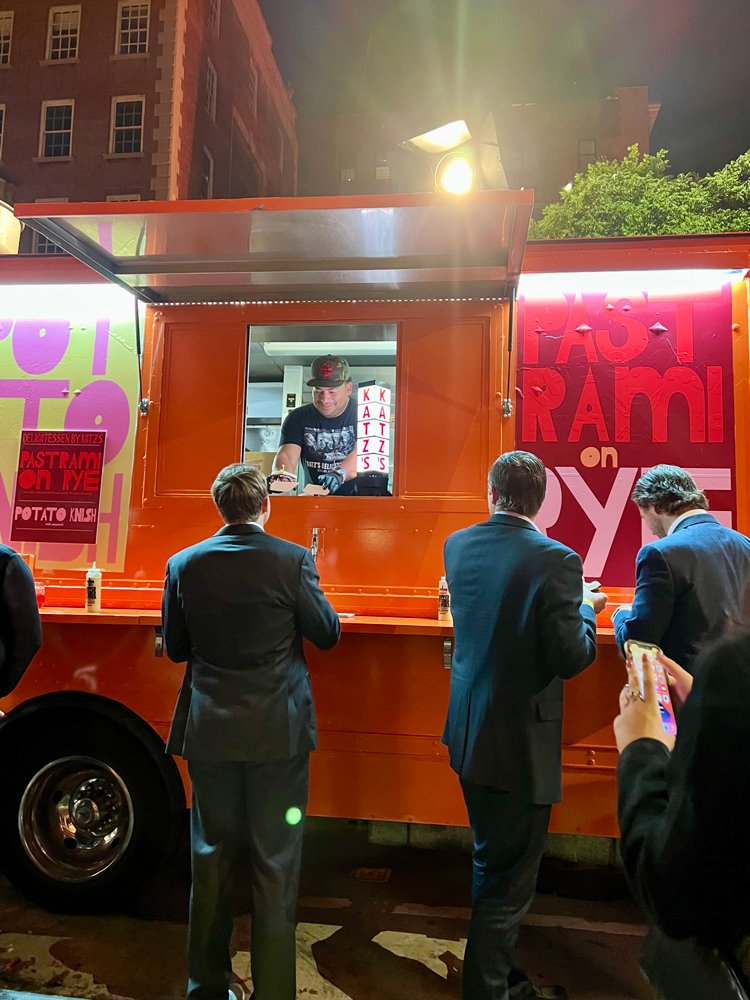 One of the food trucks set up on Madison, along with plenty of covered seating. Photo via @The_Notorious_Pink. 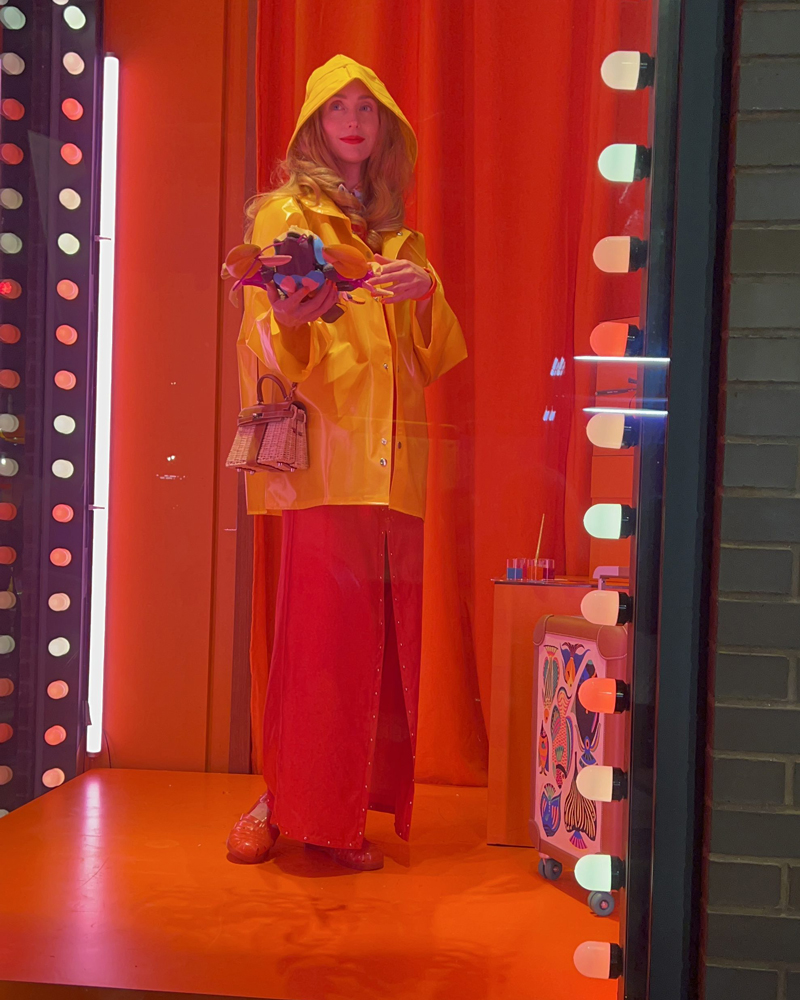 One of several performers in the former Men’s Boutique window. Photo via @The_Notorious_Pink.

This was followed by the wonderful Hungry March Band leading the guests to 691, which had been completely gutted and turned into a one-night-only disco, with several bars on various floors and a DJ booth on the bottom level where the VIP room had previously been. Even when leaving the event, one couldn’t help but notice the adorable video, reminiscent of the party, playing on nearby digital screens. 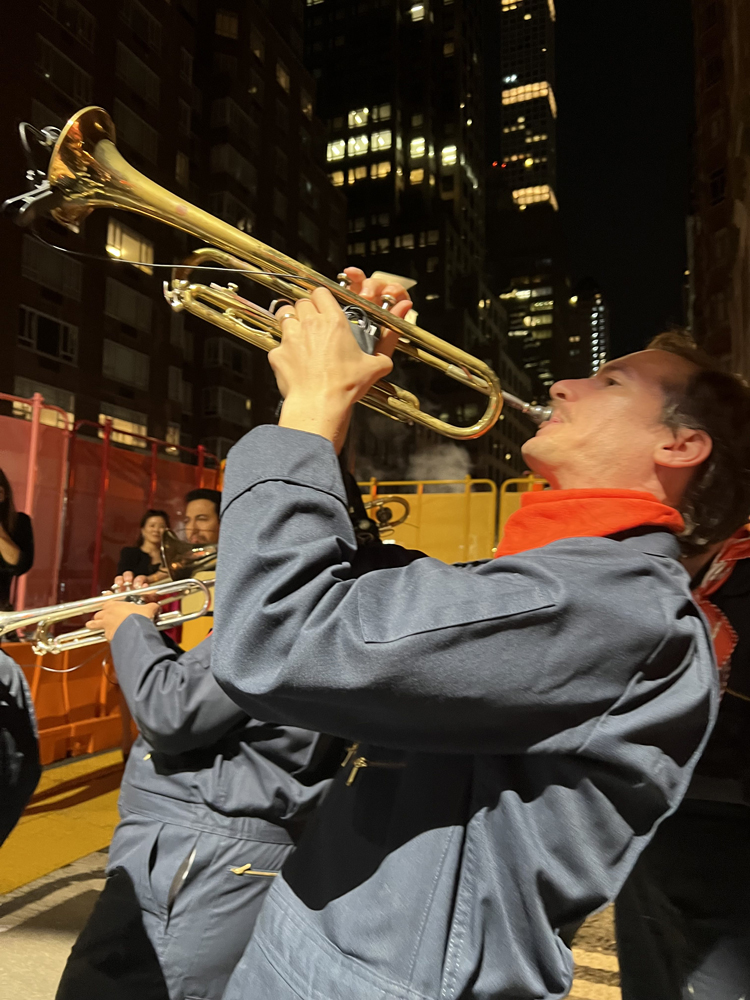 The Hungry March Band led guests from the stage at 62nd and Madison to the now-former boutique. Photo via @The_Notorious_Pink. 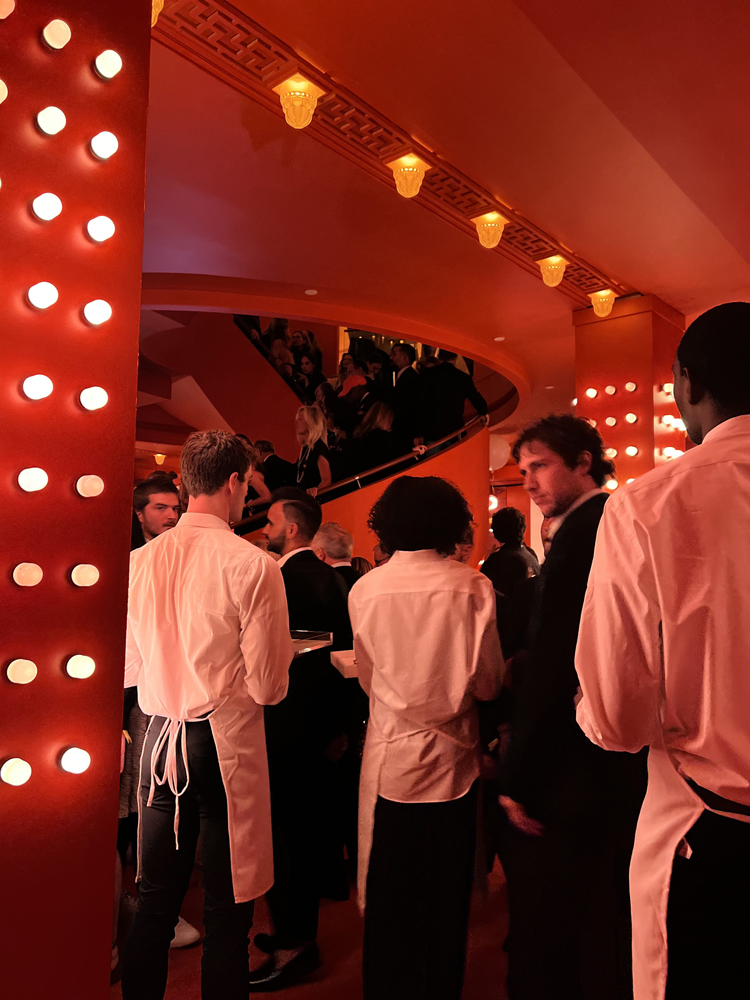 The now-gutted former boutique was turned into a disco for the night. Photo via @The_Notorious_Pink. 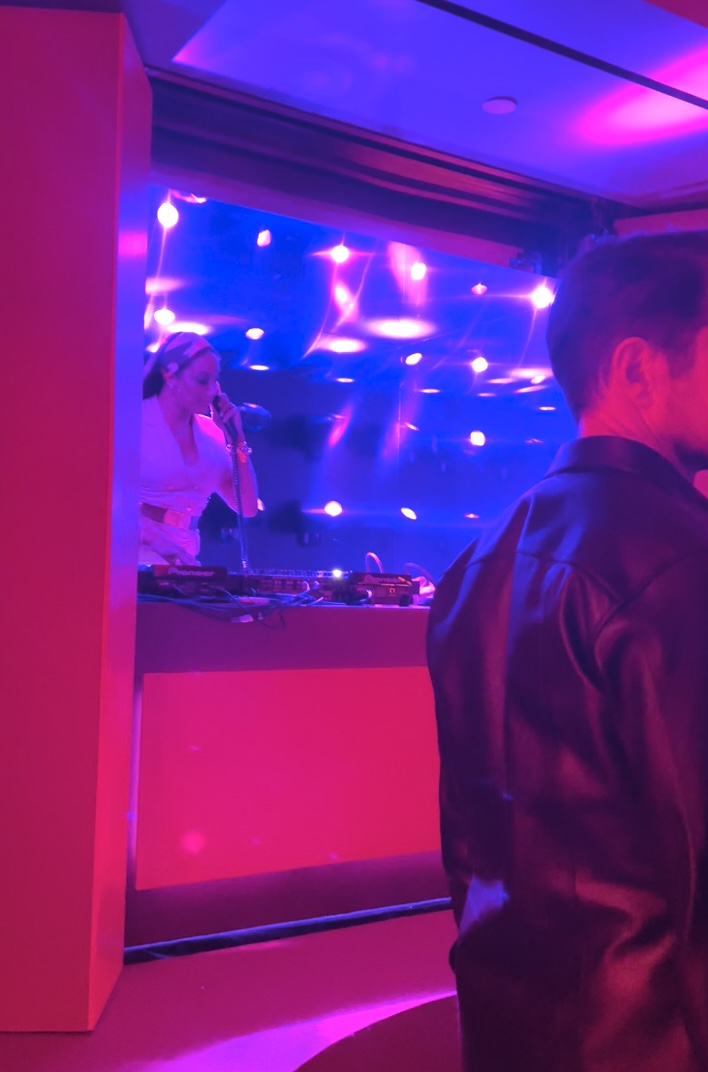 The bottom-floor VIP room became a DJ booth for the night. Photo via @The_Notorious_Pink.

The following two days were consumed with VIP store appointments, which gave the usual clients a one-hour timeslot to take a peek at the new floors, try a few things on, and perhaps be offered a bag or two. Leather offerings had been allocated beforehand, and while many were able to bring home a special treat, just as many were left waiting while production is still ramping up; bags are expected to be delivered regularly so that the new boutique can meet the incredibly high sales targets projected for the remainder of the year. A selection of Lindys become an artful display on the leather floor. Photo via @The_Notorious_Pink.

While there was a bit of line-waiting on Friday the 30th, by Saturday, the appointments ran much more smoothly, if still a bit over time, as Sales Associates began to get the hang of the new boutique. Despite any wait – which was, to me, quite welcome as a time to sit back and take the entire experience in – everyone was in very high spirits, buffeted along just by the mere pleasure of being there and seeing the sheer aesthetic beauty of the new location and all the new surprises that it entailed. 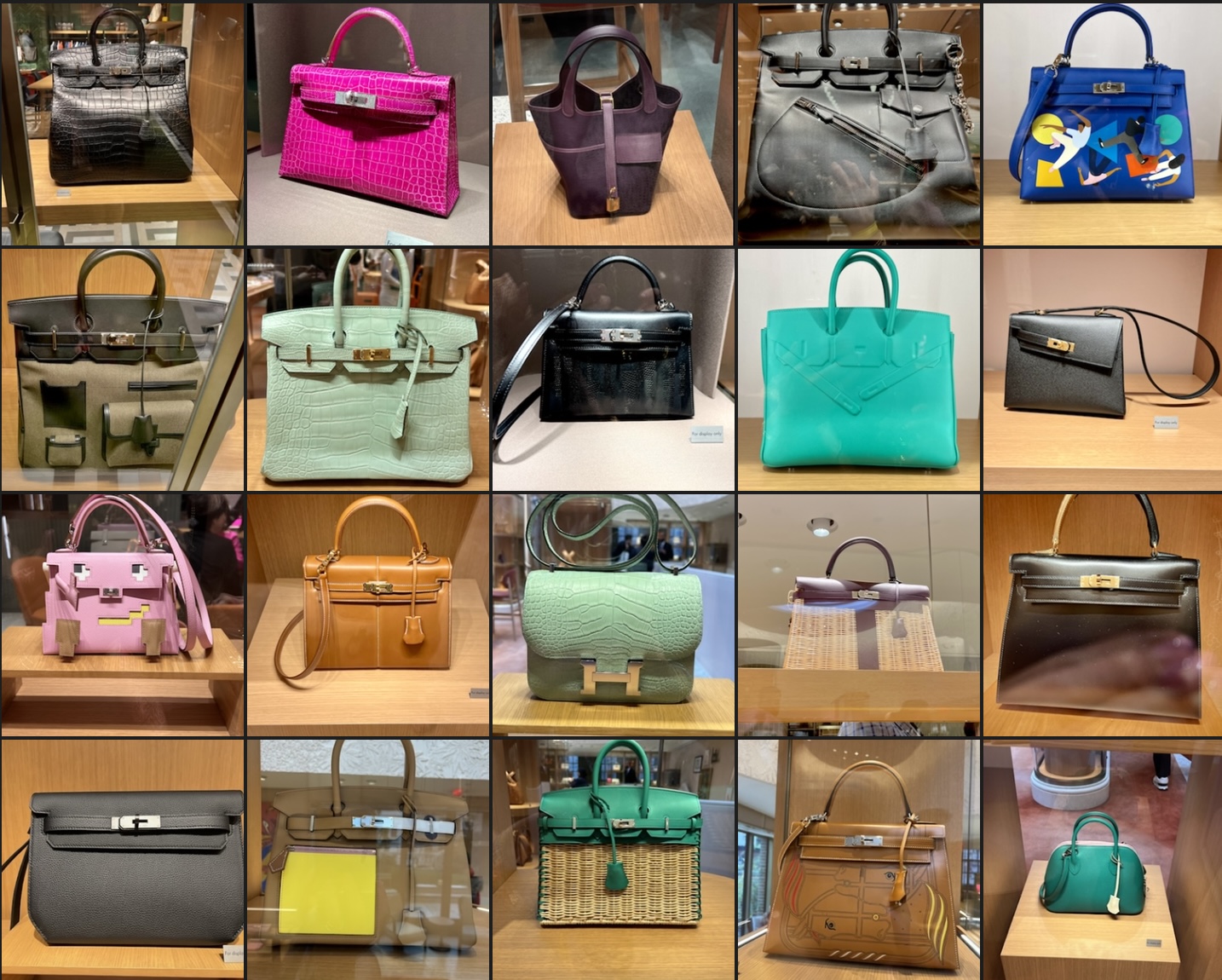 An incredible array of exotic and rare bags on display at the new Hermès Madison Flagship. Photo via @The_Notorious_Pink.

The store opened to the public on October 3, but it is highly recommended that you try to get an appointment so that you don’t have to wait in what will undoubtedly be a long line.

Wow, what an opening! I’m not THAT huge a fan to ever want to be a VIP there, but it’s good to see that they’re keeping the “spirit” of luxury at least some times. I find too often the fun/whimsical, and interesting aspects are brushed aside, and you pay like $5k per bag or $3-6k per coat or whatever and you walk in and out of boutiques same as you would a walmart, with *potentially* better dressed customers as the only difference. This is all in excess and fun anyway, might as well go all out and do it justice!

I like to remember that, while it was indeed quite a lot of money, that money went to NY performers, carpenters, planners, restaurants…all of the people and businesses Hermès involved in the production of this opening, 🙂

This is so fun! Thanks for sharing!

me when I lie

Can you say something nice? You’re always raining on everyones parade. I feel if you were invited you would have had fun! 😊

I always see it as jealousy if someone has something negative to say. Theres nothing wrong with saying something positive and up lifting. Why cant you just take it lightly and be happy for others?

… I think it’s okay to be critical but it needs to be backed up with substance. That’s all.

3
Reply
She who shall not be named

What a fun night! Wish I had been there.