Fendi and Sarah Jessica Parker have designed this custom bag together
22
By Megs Mahoney Dusil •  Feb 2, 2022

The much-anticipated revival of Sex and the City has been met with a wide and expansive range of feelings. I must say the first few episodes weren’t working for me, but the past couple have found a much better cadence, one that brings the raw and funny group of friends back to our screen. We all watch the show for the commentary as much as we do the fashion and the bags… and oh, the bags! Carrie Bradshaw brought the Fendi Baguette to our screens over two decades ago, and if there is one bag that her character continues to be synonymous with, it is the Baguette. If you’re like me, when you see a Baguette, you may internally remind yourself that it’s not a bag, it’s a Baguette.

After the reboot of the show, Fendi released the iconic purple sequin version of the Baguette that SJP’s Carrie Bradshaw character wore in the original series, in a campaign a few years ago, and in the reboot. Now, Fendi has announced that it partnered with Sarah Jessica Parker on a limited edition custom Fendi Baguette that is adorned with pink sequins and can be seen on Carrie Bradshaw. 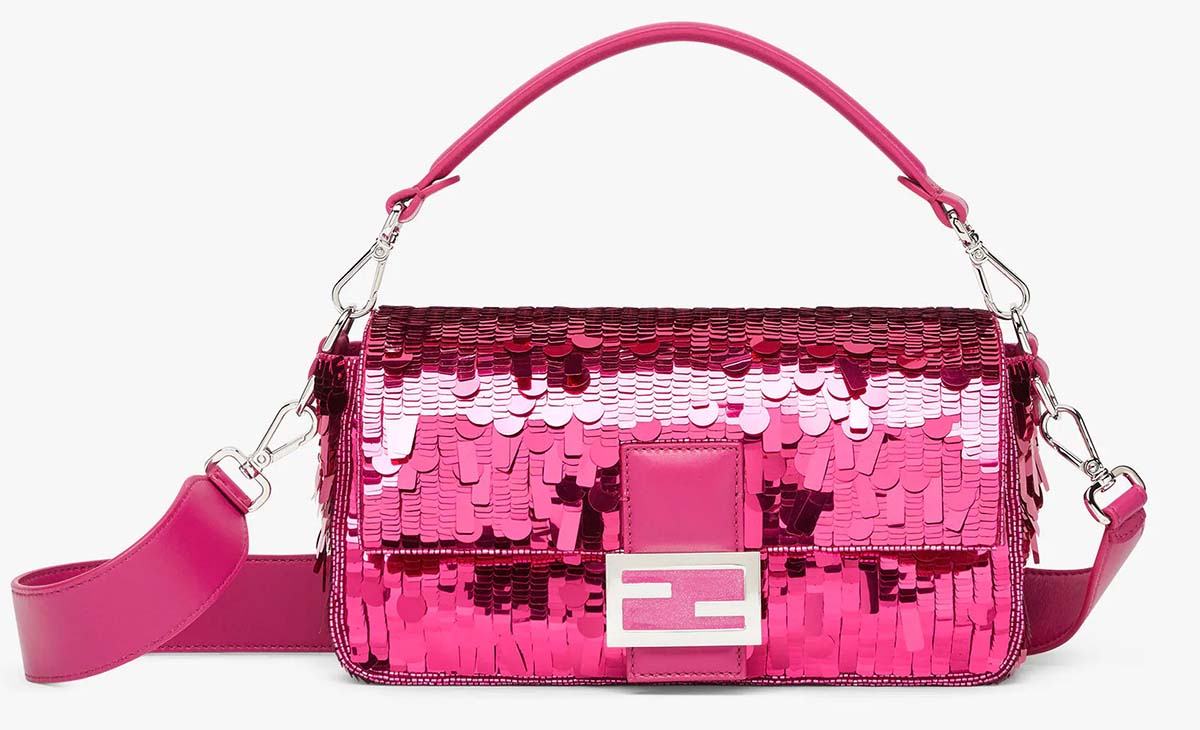 This version of the bag can be spotted in And Just Like That‘s 9th episode, ‘No Strings Attached’, which aired this past Thursday, January 27th. Of course, you’ll find the magnetic FF clasp, a front flap, and an internal compartment with a zip pocket. The Baguette can be carried in different ways, including by hand, over your shoulder, or crossbody thanks to the removable leather handle and shoulder straps.

The most cringe-worthy show on television. The epitome of virtue-signaling.

Being an Indian, the scene with the saree ruined it for me and not to mention every other scene trying to “solve” a problem.

2
Reply
Ed B
Reply to  JOJO

Tbh even as a virtual signaling/woke attempt it fails.

It’s full full full of cringe I couldn’t get through the first episode without muting and fast forwarding. Unwatchable for me and I am NOT at all above watching trash TV, am pretty darn “woke” for my age (having been queer my whole life and all), and just… just no. So much cringe in this show.

I haven’t seen it so I can’t comment about virtue-signaling. I’ll need to watch at least one episode (if I can get through it 😊) because now I’m curious.

How is it possible I find this bag so appealing and yet so tacky at the same time? Does that mean I have terrible taste but at least I’m aware of it? So many feelings.

I’m in the same boat, but I’ve always been a magpie.

The purple came out in sept 2020… how is this SJP’s design? It’s just a different colour 🤦🏻‍♀️

Regarding the bag, it’s cute but not worth $4300 IMO.
Regarding the show, it’s a hard no for me. I was a fan of the original and the 1st movie, the 2nd was horrific and this series is unwatchable. I find all the characters, especially Charlotte, really irritating. And why is Brady even a character? I stopped watching after the 2nd episode. If i want fashion, I’ll read a fashion mag.
Regarding the bag over the chair, really? The last time I did that was at The Ivy and it was my beloved LV Murakami White Multicolour Frange Bucket. It got knocked off the back of my chair but I thought someone was trying to steal it. I turned around to yell at the person and wondered why no one at my table was yelling “Stop Thief”. Turned out that it was Michael Bolton who knocked my purse off of the back of my chair, handed my purse back to me and apologized, then returned to his table in the back corner where he was having brunch with Nicolette Sheridan!!!!

If this bag wasn’t as established and iconic as it is, there would be no way it would be able to pull off the pink sequins. If you put all that on a new and upcoming brand/design, it would never make it off the ground.
Not sure if I love or hate it . I’d have to see it IRL.

Do people really sling their beloved handbags over their chairs?

I do, but I use the cross body strap and thread it through the back of the chair by unclipping and re-clipping the hardware. That way if anyone tries to take the bag they have to take me and the chair with it 🙂

OMG that’s ingenious!!! I have to remember that. But how do you prevent a waiter from accidentally spilling coffee on your $1000+ bag???

in NY, it’d be snatched up in a second!

I have to say, I am a vintage baguette only kinda girl. The Vintage ones are sleeker and more effortless in a way that makes the over the top kitschy designs feel more elegant and tongue in cheek all at the same time.

Both the pink and purple ones are both sold out, on the Fendi site.

Postmark has the purple!

Easy to sell out items when you make a very very small amount of inventory. Saves you from having extras, allows you to make a public statement that you are “sold out “. Adds to the popularity.

Yep! LV has perfected that game! I don’t even look when a new bag is introduced. I guess I could pre-order, but I rarely buy and haven’t cultivated a relationship with a dedicated SA.

This bag should be priced $1300 and NOT $4300 oh heavens!! I’m a big fan of fendi but designers in general these days! what has gone to their heads with the price hikes left and right?? you can literally buy 94 grams of pure 24 carat gold in Jackson Heights NYC that will appreciate way more in value!