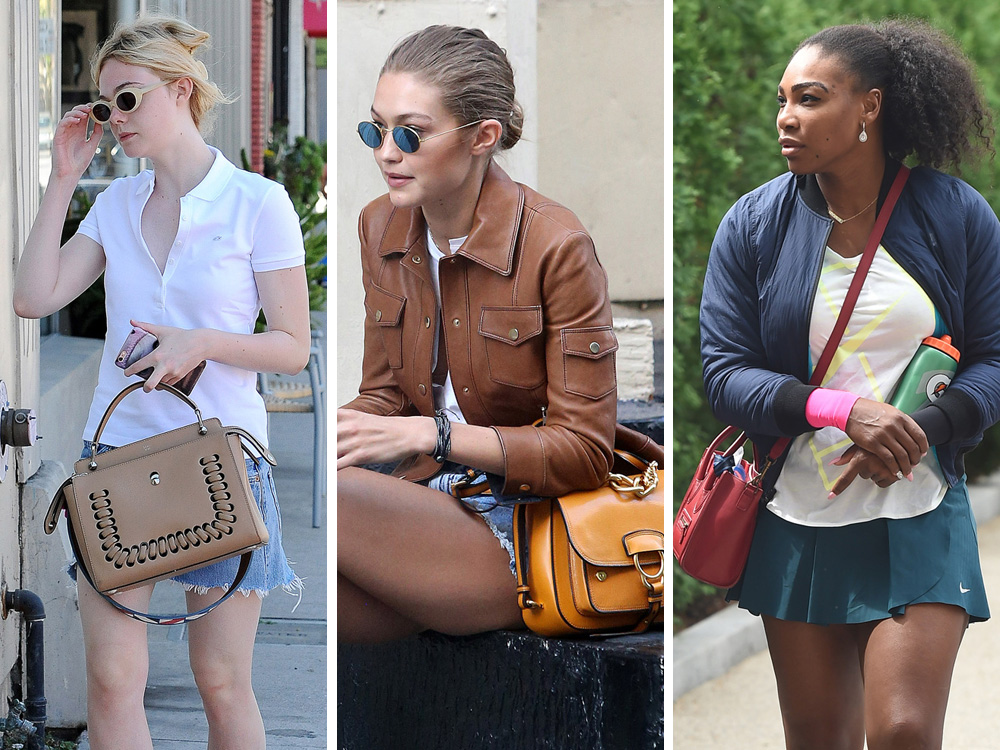 Celebs are all over the globe this week, and yet their bag choices are oddly in sync. Bags from Fendi and Saint Laurent are obvious faves, and a hot new style from Miu Miu has just made one of its first appearances on the site and you’re sure to have an opinion about it one way or another. In related news, Reese Witherspoon remains surprisingly loyal to her favorite Salvatore Ferragamo style, and Solange Knowles brought a mystery bag to Beyoncé’s b-day party. If you can properly identify it for us, we will crown you as our leader.

Here’s Elle Fanning, carrying a taupe Fendi DotCom Bag while out with her mom in LA. Fendi first introduced this bag back in December of last year, and I don’t think celebs have decided how to feel about it as a collective. The Fannings are obviously big fans, however. 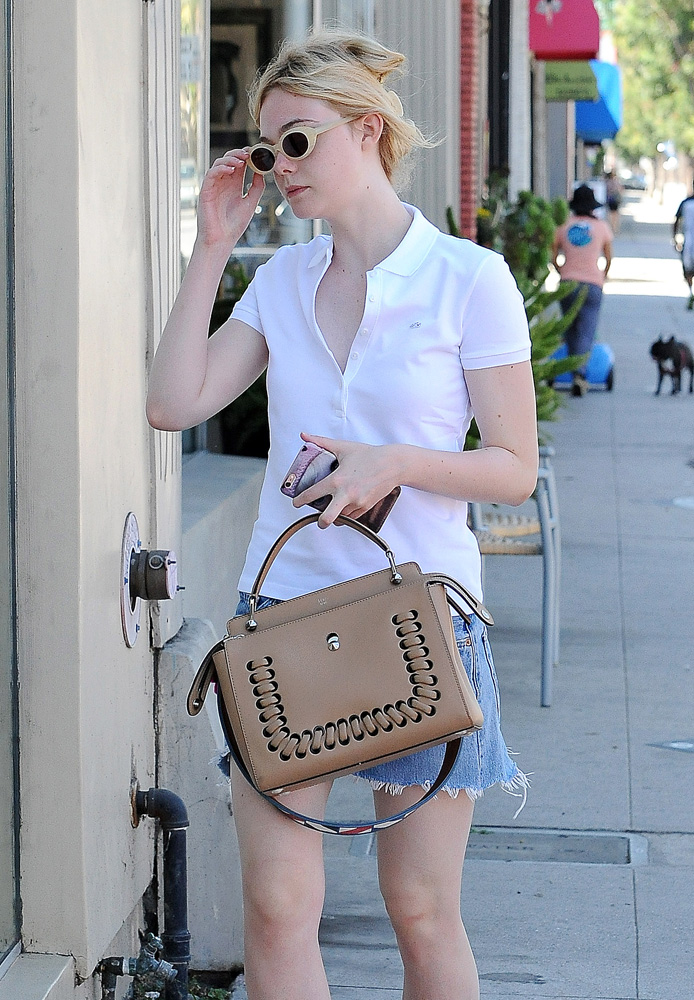 Gigi Hadid carried this fetching new brown leather Miu Miu Dahlia Bag while doing a little shopping in Soho. I am usually not a fan of oversized gold hardware, and yet I find myself inexplicably drawn to this style. 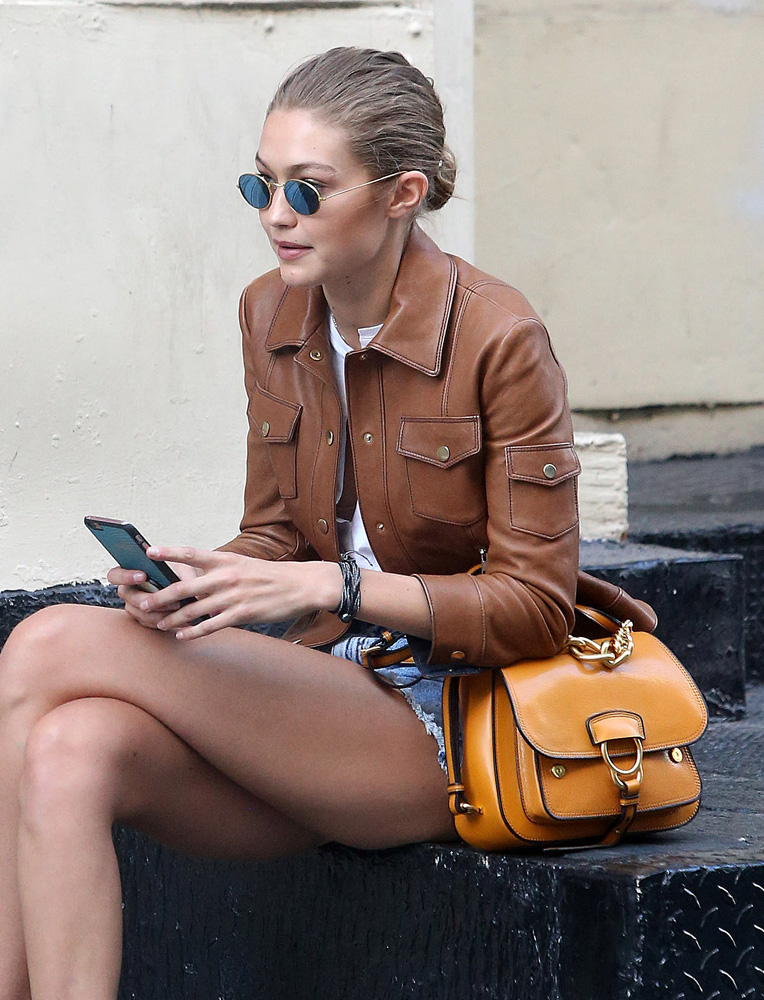 Gigi was also recently spotted leaving her apartment in New York with her tried and true black exotic leather Saint Laurent Sac de Jour. You can further explore Gigi’s collection in The Many Bags of Gigi Hadid. And if that doesn’t sate your appetite for Hadid handbag picks, The Many Bags of Bella Hadid is hot off the (virtual) presses. 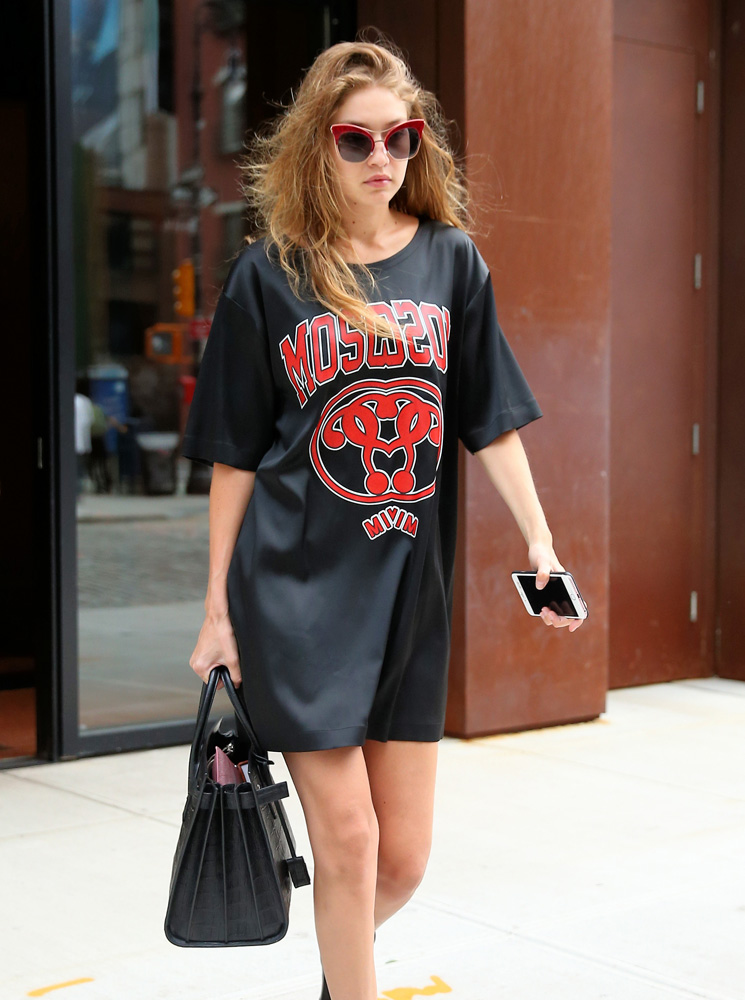 This is your bi-monthly reminder that Gigi Hadid and Hailey Baldwin are actually different people, though I can no longer remember which one of them was romantically linked to Justin Bieber. Here’s Hailey shopping at Alexander Wang in NYC with her croc-embossed black leather Saint Laurent Rive Gauche Tote. 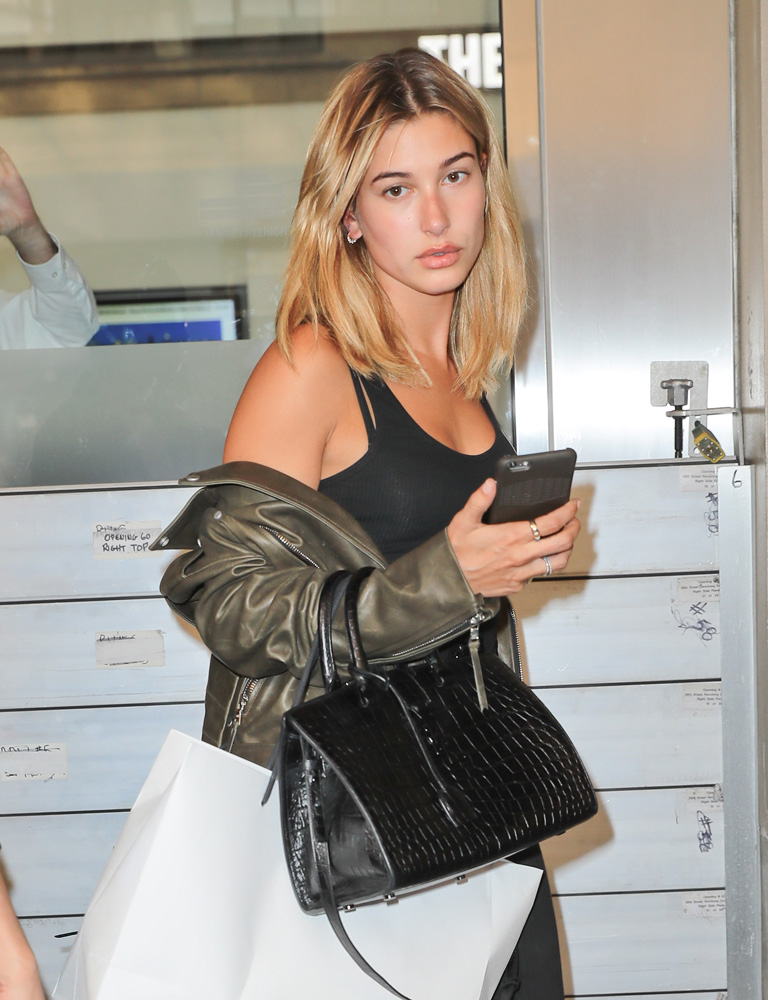 Reese Witherspoon and one of her favorite Salvatore Ferragamo Fiammas recently paid a visit to Jessica Biel’s kid-friendly West Hollywood restaurant Au Fudge. This is an honest question: are twinsets coming back? 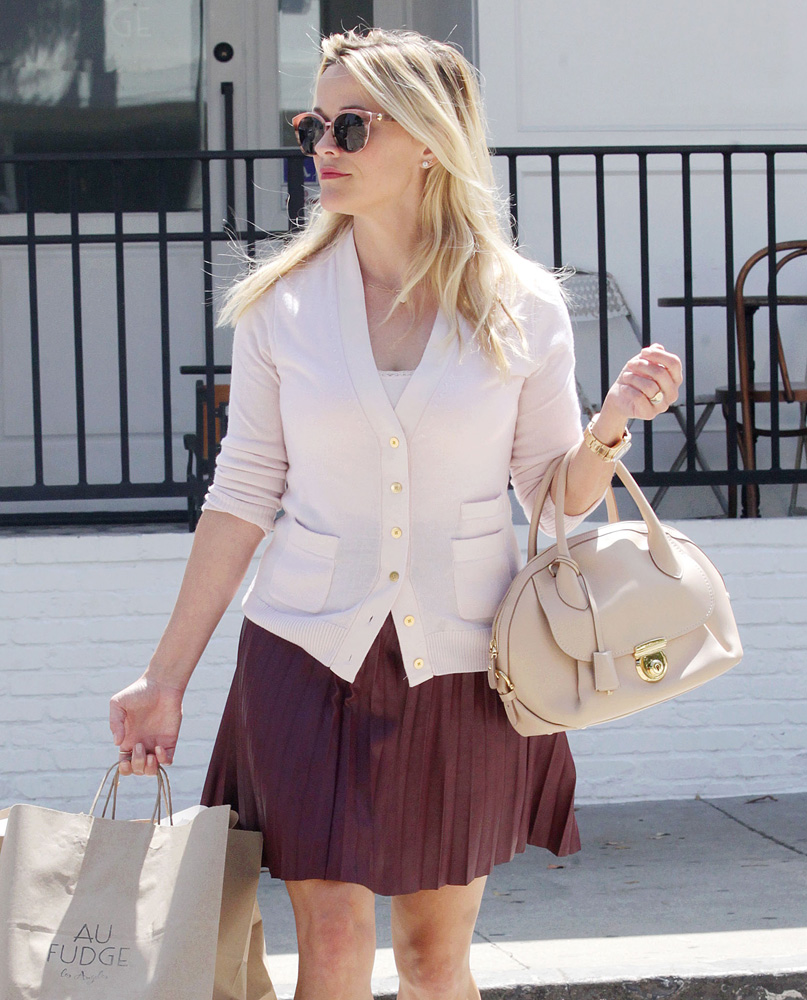 We haven’t seen Serana Williams carrying a lot of mini bags, but here she is at the US Open with an eye-catching, bright red Céline Nano. She hasn’t won the US Open yet as of this posting, but I wouldn’t bet against her. 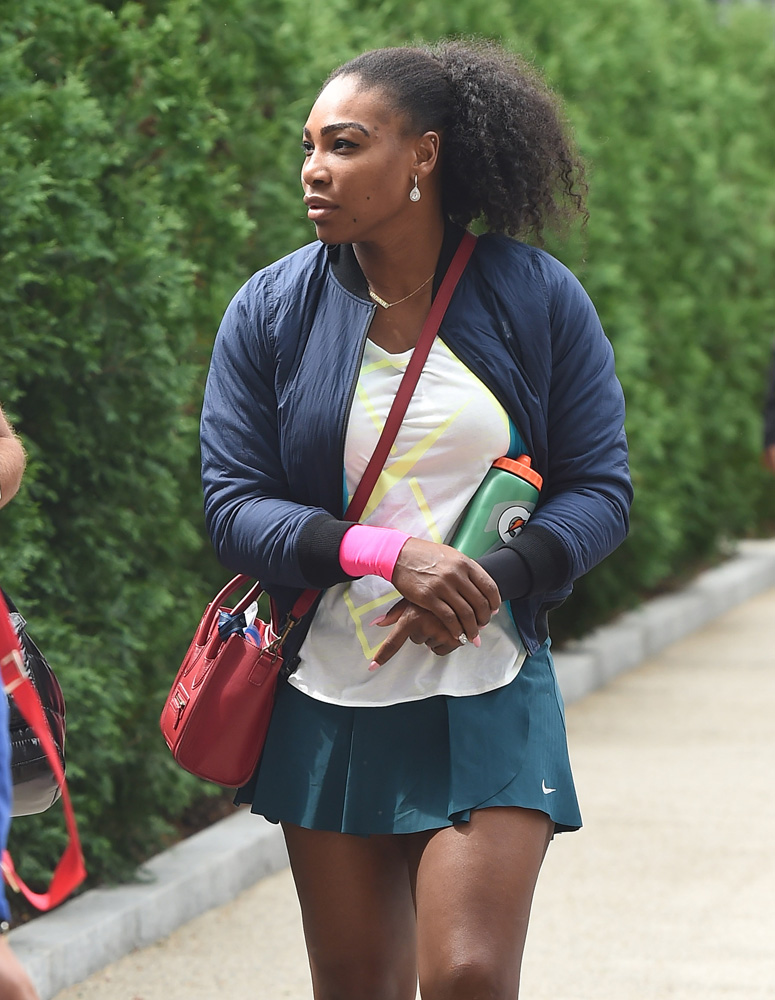 Solange brought this green velvet MYSTERY bag to Beyoncé‘s Soul Train-themed birthday party. We don’t know who makes it, but Solange likes a lot of smaller/emerging designers. If you have the intel, please share in the comments! 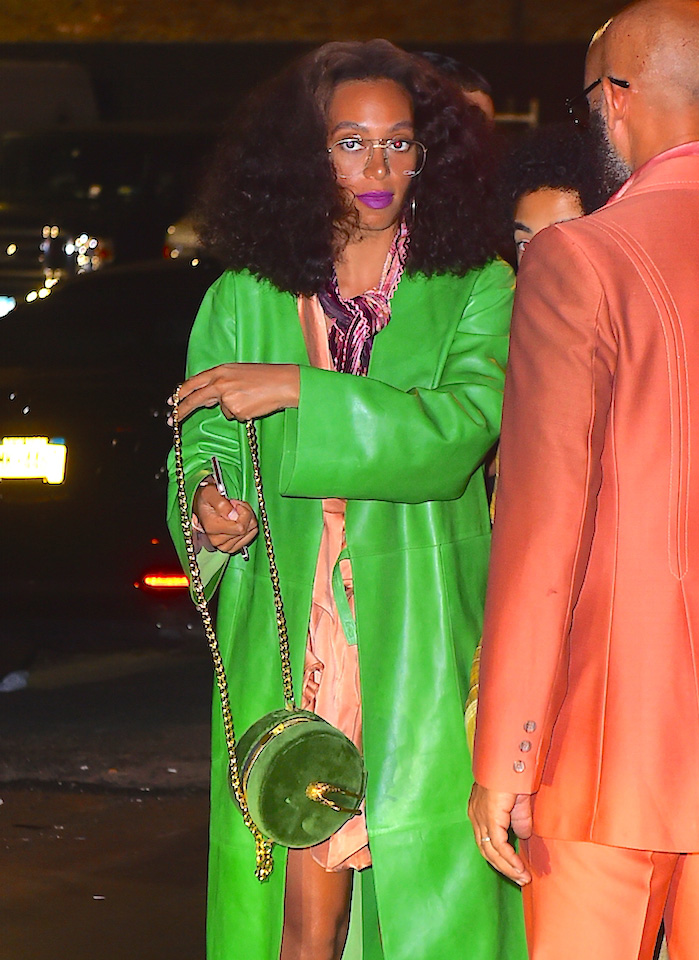 Finally, here’s Suki Waterhouse, on her way to the photocall for hew new film The Bad Batch at Venice Film Festival. (Yes, Suki is now a model/actress, not just a model.) She’s carrying a pink and beige Fendi Double Micro Baguette Bag, which both delights and confuses me. 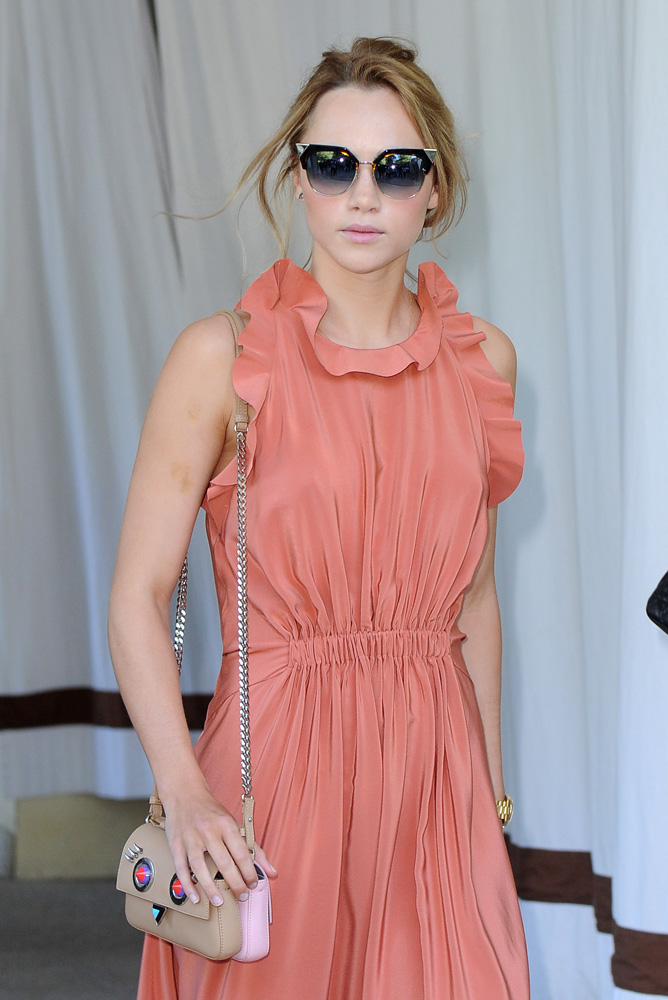 Hailey’s bag is a Monogramme Cabas Tote, not a Rive Gauche. Zoom in and you’ll see the ‘YSL’ logo closure

You are right. I’ve been coveting that bag ever since she first carried it. The hardware is black, so hard to identify. Love it.

I agree. Love the name, still having a hard time loving the bag.

I want Gigi’s jacket. Anyone id?

Serena looks amazing and she makes that Celine nano look wearable and practical.

I currently get paid approximately $6 thousand-$8 thousand /month for freelance tasks i do at home. For those of you who are considering to do basic online task for some hrs every day from your house and gain valuable benefit for doing it… Test this task http://ur1.ca/pm79n

I like how Serena look in this photo. She’s fierce.

One of each please.

I’m getting my Miu Miu Dahlia in brown Madras goat leather today and I’m so excited! This bag looks very sturdy, practical with multiple compartments with lots of room and a perfect size for casual wear.