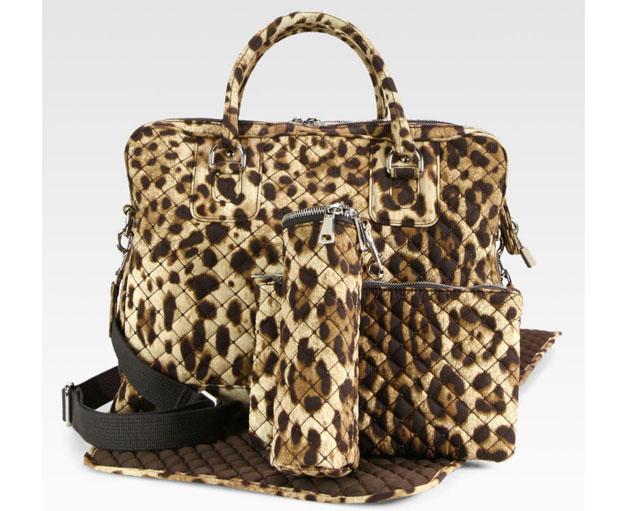 That’s the only thought I could have for at least 15 seconds after I first laid eyes on the Dolce & Gabbana Leopard Print Diaper Bag. Of course Dolce & Gabbana makes a leopard print diaper bag. What other kind of diaper bag would Dolce make? It makes so much sense, except that it doesn’t make any at all. Dolce usually reserves its much-adored leopard prints for its sexiest, skin-tightest pencil skirts, dresses and bustier tops, which will undoubtedly lead to baby-making in certain instances. Then, nine months later, you have this infant, and this infant has all of these things. Really, it’s just sensible for Dolce & Gabbana to consider that eventuality.

As far as the bag itself goes, I could see it going on of two ways. First, on the arm of the right woman with exactly the right wardrobe and presence, the bag (which comes with a coordinating insulated bottle sleeve and changing mat) could simply take the place of a a normal handbag – with a baby in tow, the shift in accessories would make sense. In my mind, though, this woman would have to have more or less stepped straight out of a Dolce & Gabbana ad to pull off the look – a big, quilted leopard bag needs exactly the right context to work on any level. On everyone else, this bag is more likely to make you look like an aspiring Real Housewife of New Jersey.

Think you could pull it off? If I were a new mom, I’d certainly take it for a spin around the handbag floor at Saks, but then again, I’m partial to leopard in almost all its incarnations. What was it that Diana Vreeland said about bad taste and paprika?

If you’re feeling adventurous and want to get your child started on leopard print early, pick up this bag for $780 via Saks.

This will not shock you: pregnant stars do not mess around with micro bags. We didn’t set out to do a maternity edition of our usual celeb bag round-up, it just sort of happened accidentally; you could call it…unplanned. Designer Baby Bags