Debate: Would you bedazzle a bag, real or fake? 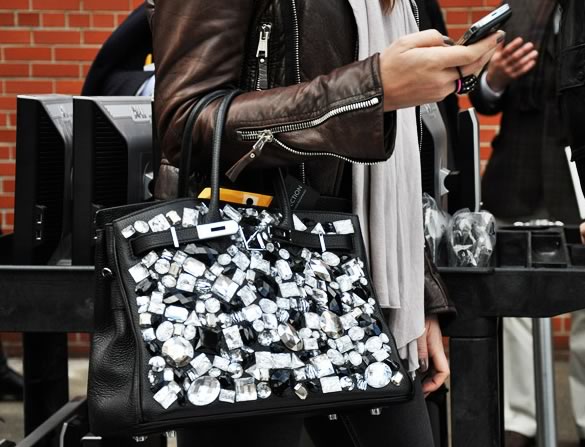 During NYC Fashion Week Tommy Ton, of Jak and Jill Blog, snapped photos for Style.com. His focus was on street style and what was being worn outside of the tents. There was one photo that caught my eye. A bedazzled Hermes Birkin.

The first thought that came to mind is ‘Why would anyone glue gems onto their Birkin?’. The immediate next thought that followed after looking at the bag was ‘This doesn’t appear to be an authentic Hermes bag‘. Both of these thoughts left me wondering, for the sake of catching attention, would you take the time to buy a counterfeit handbag and update it to stand out?

As you all know, on both PurseBlog and PurseForum we do not advocate fake items. Does it then change if you buy a bag off Canal Street in order to have fun with it, or is it still something you would never do? And could you ever imagine buying an authentic Birkin for near $10,000 and pasting jewels on it?

Let’s have a weekend debate: Would you bedazzle a bag, real or fake?