I don’t think I’ve ever written about a Tylie Malibu bag before, but when their designers are making bags as cool as the Tylie Malibu Rose Studded Shoulder Bag, how could I resist the opportunity? We know by now that studs and other industrial details are a huge trend for fall, and when so many other designers are flooding the market with similar bags, it’s surely difficult to make your studs stand out among the others. Yet somehow, this one does. And in a really good way. 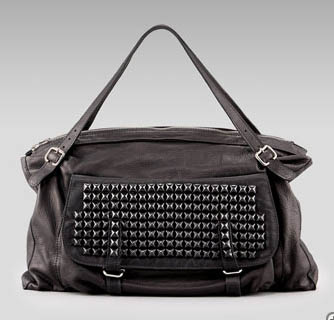 Part of my attraction to it is because of the big mass of studs right in the middle. The only other designer we’ve seen do studs in such a bold way is Alexander Wang, and while this is certainly not an It Bag of that caliber, it’s probably a bag that could be implemented into more different types of looks. I particularly like that the studs are gunmetal instead of bright silver or gold – it’s simultaneously more industrial and more sophisticated than the alternatives. On closeup, the leather looks great and the bag looks very functional, so I can’t help but wonder if there’s a way for me to come up with 500 extra dollars. Buy through Neiman Marcus for $495.