Last week, we spoke briefly about the “disco” component of the Foley + Corinna Disco City Bag. To me, it seemed kind of lacking in the showy, shiny disco spirit. Sure, it’s a little bag that you could strap on and take to a club, but doesn’t “disco” mean more than that?

Obviously I’m not the only one that thinks that disco means something slightly more grand and glittery, because the Santi Beaded Disco Bag is definitely much more of an embodiment of the word as I understand it. 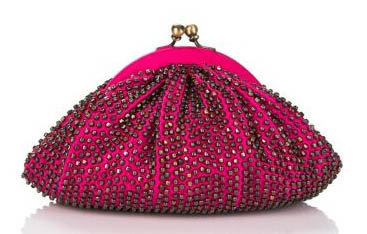 Not only is the bag a bold color, which was popular during the era, but the smattering of shiny studs is a bit reminiscent of what we probably all best recognize from the disco craze – a disco ball. If a slightly yellowed, slightly less shiny one.