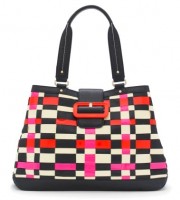 It has been pointed out to me recently that I don’t do a very good job mixing color into my winter wardrobe. In all reality, I don’t do that great of a job mixing it into my summer wardrobe either – I have a deep and abiding affection for black and grey. They’re kind of my thing. It’s not that I don’t own color – I own lots of it – but it’s just not the stuff I reach for when I’m running out the door, and I’m almost always running. I’m not much for well-coordinated social scheduling.

I usually do a pretty good job with colorful bags, however – I only own one that could be considered a traditional neutral. So I’m thinking that if I ignore my previous distaste for multicolored bags, I might be able to find something cute around which I can build an outfit that uses both color and my black favorites. Obviously, the perfect candidate for this experiment would be the Kate Spade Carousel Naomi Bag. 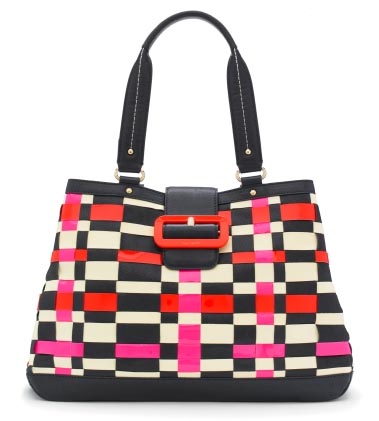 Normally, this bag wouldn’t be my thing, but something about the neutral-but-not color combination and clean lines is totally compelling. There is just enough pink and orange to combined with the black and cream to give the bag an almost mod feel, and the irregularly shaped weaving stops the bag from being too geometrically obvious. The orange plastic buckle seals the deal – it’s a retro-modern mashup around which an entire outfit could easily be built. Buy through Kate Spade for $425.