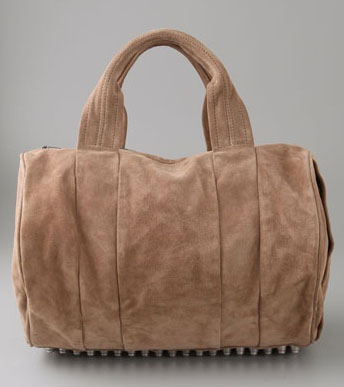 If Alexander Wang is going to insist on continuing to make non-black and non-leather iterations of the super popular Alexander Wang Coco Duffel, then he’s going to have to do better than tan.

The only things that I can think of when I see this bag are the faux nubuck jackets that you see in the men’s department at Wal-Mart every year and that are, presumably, purchased only by middle aged men that count huntin’ and workin’ on their truck among their main hobbies (note: I’m from the South, so I’m allowed/qualified to make jokes about redneck Wal-Mart shoppers).

The material just doesn’t look high-end to me, which might be a personal bias, but I suspect that I’m not alone. Wang doesn’t necessarily intend to make things that are conventionally pretty, and assuming that he does would be missing the point of his aesthetic, yet I don’t think his It Boy status is enough to make this bag work. I know that a lot of people that embrace his line might appreciate peculiar items on an ironic level, but if it takes irony to sell a bag, we’ve got to question the design itself.

Which is too bad, since I so totally love the bag’s original black iteration, and I can think of several other color and hardware options with which I’d be similarly smitten (dark purple leather with silver studs, anyone?). But I guess if a brand is going to devote itself slavishly to an aesthetic, it’s likely that not everything that comes out of that devotion will be good. As it is, I still love Alexander Wang. Buy through ShopBop for $850.

It does look like it would be more popular with the Wal*Mart set than the designer one. You’re right, of all the options for this bag tan suede was not a great choice.

If he made this bag in a dark purple with silver studs, I think I would lose my mind.

I agree. This bag is a snoozefest in tan suede.

The tan suede is actually stunning in the DIEGO model. This particular bag I prefer in the new Dove Grey and the Navy Suede with silver studs. The quality of his bags are well worth the price. Beautiful, understated and luxurious. Definitely recommend picking a piece up!

It’s not that bad, seriously.