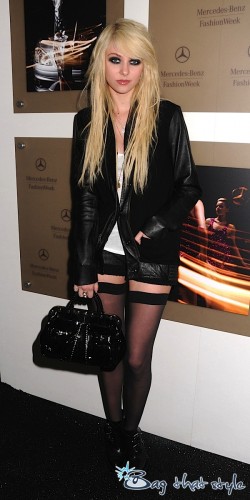 Well, first, it has to be said. Taylor Momsen is approximately 16 years old, and this look is perhaps a tad old for her. She could probably be wearing things that are slightly longer, and eye makeup that’s slightly less…well, just slightly less.

But I kind of love her for dressing like this, truth be told. This is how every girl that ever bought a Joy Division album desperately wanted to dress in high school (including yours truly…), and almost none of us ever got the opportunity. I didn’t because I was on debate team and bleach-blond extensions and a whole pencil worth of eyeliner probably would have made me look unprofessional at tournaments. That, and I don’t think my mom would have bought me leather short shorts. But a girl can dream, I suppose.

But obviously, we’re here to talk about Taylor’s bag, the Versace Metal Frame Satchel. We’ve spoken about this bag before, but it’s hard to get a sense of something when you can’t see it carried. Two things struck me this bag after I saw the pictures – it’s a lot smaller than I expected it to be (it’s not nearly the size of a Stam, to which I originally compared the structure) and I like it just as much as I did previously.

It’s legitimately a nice-looking bag, which is not always Versace‘s strong suit, and for that I’m excited. The price, however, is still thoroughly unexciting. Buy through Nordstrom for $3995.

Lunch Bag Style Clutches Are a Apparently a ThingNew Dior, Versace and Longchamp Bags Are This Week's Celeb FavesRihanna Carries Dior and Bottega Veneta on the Same DayBack to School Cool — 12 Backpacks to Start the School Year in Style
Amanda Mull