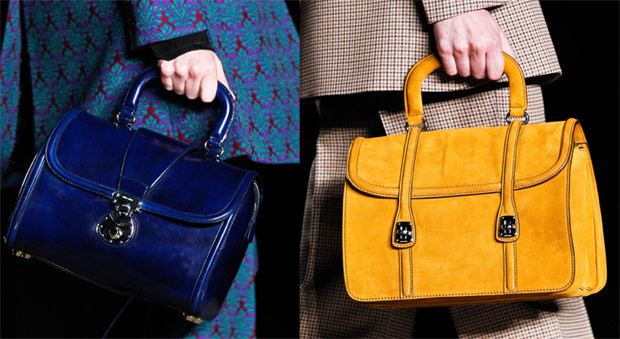 There are no two ways about it: last season’s Miu Miu runway bags were a bit of a catastrophe, even for someone like me who generally thinks that Miuccia Prada does no wrong in either of her lines. Thankfully, Miu Miu Fall 2012 is much better. The line doesn’t look like Miu Miu so much as it does Prada Lite, but the bags are bold, structured takes on traditional shapes – an accessories avenue that rarely leads a designer astray. After last season’s tiny, quasi-western oddness, it’s a welcome change.

The neutrals in the collection bored me a bit, particularly as part of a ready-to-wear collection that was so exuberant with print and color, but when the blues and yellows started to come out, things got exponentially better. The bicolor jade and red bag? Such an odd combination shouldn’t work, but it does. The highlights, though, were several options in inky azure; blue isn’t even in my normal color palette, but for Miu Miu, I can make an exception.