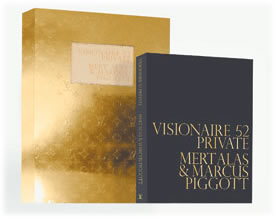 Visionaire is a multi-format album of fashion and art produced in highly exclusive limited numbers and editions. One of the newest editions, 52, which will be available in October, features designer Marc Jacobs posing nude. Not new to the nude front, Jacobs embraces this issue and even left his photos untouched. The price will be $375. While the price is steep, keep in mind this will be a limited edition and finished off with a Louis Vuitton gold monogrammed case.

Marc Jacobs is clearly proud of his bod “” and bares it all again in the latest edition of Visionaire. The 168-page oversize book, sponsored by Louis Vuitton, includes nude photographs of a bevy of models, actors and celebrities, including Jacobs, this edition’s guest editor. Visionaire co-founder Stephen Gan said the concept was conceived more than two years ago and most of the photos were taken late last year. “The idea was to do personal nudes of famous people. We came up with a list of who are considered the most beautiful people in the world,” he explained. That list includes Jennifer Lopez and Marc Anthony, Mariah Carey, Drew Barrymore, Naomi Campbell, Scarlett Johansson, Christy Turlington, Gisele BÃ¼ndchen, Jamie Dornan and Selma Blair, all shot by Mert Alas and Marcus Piggott. Though most of the images are quite revealing, “not everyone is stark naked,” Gan said (Lopez and Anthony appear clothed, most of the models, including Daria Werbowy and Natalia Vodianova, do not). Thus, the latest edition is entitled “Private.”

Photographs of Jacobs appear in the last pages of the book, where he appears lying across an oversize teddy bear in one image and draped in black rope in several others. (“His photographs were not retouched,” a Visionaire staffer added.) Jacobs is no stranger to baring it all: He appeared naked on the September cover of Out magazine, and on the cover of WWD in September 2006, along with his business partner, Robert Duffy, to raise awareness of skin cancer. And Jacobs hasn’t posed naked only when he’s fit “” the designer also bared all for Vanity Fair in the Nineties.

Voyeurs and others can buy the issue for $375 beginning in early October; 2,500 copies will be printed. But before sulking at the hefty price tag, consider “Private” will be sold in a limited edition Louis Vuitton gold monogrammed case. At least they thought to dress the book up, even if its subjects inside aren’t. “” Stephanie D. Smith