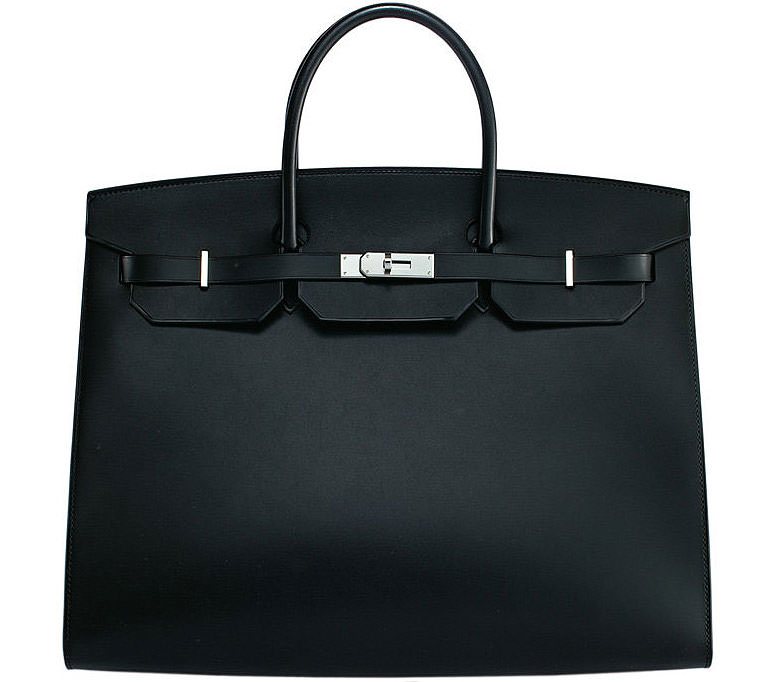 There are few sacred things in handbag design, but among them is the Hermès Birkin. When Hermès is feeling creative, the brand generally looks to the Kelly to make tweaks and create new versions–we documented nearly a dozen in our guide to Hermès bag styles, and that doesn’t include limited editions. There are far fewer Birkin styles, but now, there’s another to add to the list: the pared-down Hermès Sellier Birkin 40.

According to T Magazine, Hermès leather design director Couli Jobert set out to de-clutter the Birkin down to its essential look, which involved losing the lock and key, hiding the stitching, smoothing the edges and removing the interior lining. The resulting 40cm bag comes only in black cowhide (T didn’t specify the Hermès leather name) with Palladium hardware, and it’ll set you back $14,900.

The timing of this Birkin is perfect; although interest in Hermès bags is seemingly unending, minimalism is very much en vogue for day bags, and any design, even a Birkin, runs the risk of feeling stale as trends ebb and flow. Breaking the Birkin down to its simplest state not only gives aficionados something to chatter about and clamor for, but it reminds all of us that Hermès is successful because the brand is built on a foundation of exceptional design and materials. Most brands’ bags would not fare as well when stripped down to their bones, but the Birkin’s magic endures.

Yawn! Unless it weighs about 7 pounds less it ain’t nothin’ new.

For the price, I expect the bag to be FULLY LINED in LEATHER. I would also want the lock and key as well (it should be an option for wearer to hide the lock and key). Hiding the stitching is acceptable. Trend or not, we should get our money’s worth. Prices keep increasing and now they want to dictate “minimalism” by cutting costs?!

What color is you BOY, if I want it, I will talk you into selling it to me hehehe

I just had to have that chanel bag!!!! I’m a LV girl all the way, but the black caviar boy had been on my mind for sooooo long. Also just purchased the gst with GHW and think that will suit my need for a larger size handbag. I guess the boy has got to go to someone who will enjoy it. Appreciate the feedback????

Chanel would probably command more money than LV, which is less rare.

For 14k, I would expect a nice lining. Other than that (and the fact that I’m not a big fan of the Birkin) I think the scaled-down version sets up very nicely.

The minimal look is nice but the price tag is certainly not ” minimal.” I am definitely a HUGE handbag lover, but honestly, I would not fork over so much of my hard earned savings for a brand like Hermes. OVER THE TOP is what comes to mind. Yes Hermes leather is phenomenal, however, no one should have to go broke to buy a handbag. Its nice, but seriously $15K and above nice??? I think its very disrespectful of Hermes to try to dupe so many women. I will spend my money on Chanel or Celine (amongst others), because at least they try to keep the price in a range that won’t break the bank for many women. Sorry for the ranting…it just irks me that so many women continue to feed into this Hermes frenzy and that they are trying to sell a minimalist bag for an insane price!!! Just plain disrespectful….

The bag should be called Birkin minimalCOST bag. Wonder whether the signature skunk/pot scent comes in the new version too?

Skunk/pot scent? I own 11 Hermes bag, from when I bought them till now, they have never smelled of anything but leather. Just curious where you buy your Hermes?

Birkins from the HERMÈS stores have been reported to stink recently. But I’m sure you would know that since you allegedly own 11 bags:)

Sounds like you have a problem with others good fortune. If you re-read my comment, I did not attack you. I said “none of mine smelled & asked where you bought yours”. However, I did go on The Purse Blog, and sure enough, you had it right, & I thank you for the heads up! I will count myself lucky & hope this comment did not offend you. Have a nice evening Dylan.

I actually don’t have a problem, but thank you for worrying! I was looking through the comments on this article and your comments are quite egotistical. I have quite a few designer bags myself, but I prefer Chanel to Hermès at the moment.

Egotistical, that is entirely possible, I am not the nicest person I know, really liberal, atheist and many more things people don’t like. However, I do love beautiful things, especially clothes & accessories. I am 52 and really have been buying high end fashion for many, many, many years. So I do know intimate details about all my greatest loves. You have amazing taste, I adore Chanel. One of my most favorite things in the world is a grey flannel coat from Chanel, winter 2012. I want to be sent to oblivion wearing that. I imagine that sounds egotistical to you, well sue me hehehe

Liberal –atheist –love beautiful things –what’s not to like!!

That definitely doesn’t sound egotistical whatsoever. We seem to share a love for grey Chanel because I’m actually carrying my grey Jumbo as I type this.