An Entertaining Variety of Selections From Hermès Autumn/Winter 2022 Runway

Both the beautiful and the risky at Hermès, with a lot of vintage reinterpretations thrown in
12 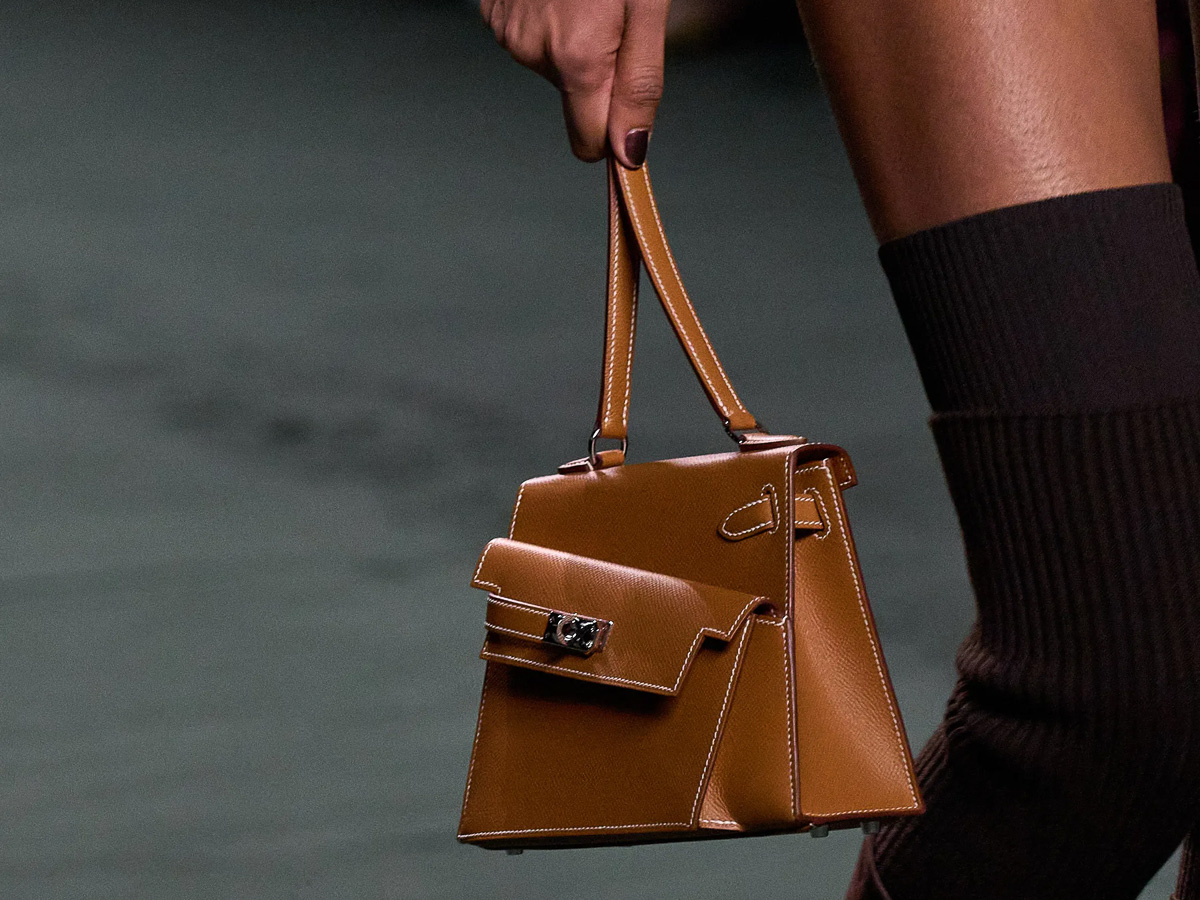 While I occasionally complain about the negative impact of social media (the complete loss of any attention span, online outrage both real and faux, trolls, etc.), there are many great benefits – the increasing inter-connectedness of our communities, and, in particular for me, the instantaneous spread of information. So it was with great joy and good coffee that I was able to watch the Hermès Autumn/Winter 2022 runway show from the warmth of my bed with only my German Shepherd Rocky to hear my gasps of excitement at what was coming down the runway. There was a lot to be excited about.

I’m sure that at this point, anyone who has wanted to read a review of the show has already read it from the big players, like Vogue Runway and Bazaar and WWD, pronouncing it all “sexy” and “exciting,” particularly for Hermès, which tends to keep the shows very pretty and essentially very similar, from season to season. Of course, these reviewers see a lot of runway shows and tend towards what I like to call “the professional sycophancy of the fashion class,” which is not so much a review of the show as a carefully-worded description of it. Also, these seasonal pronouncements are usually very dry.

So now you get my hot take.

Let me start with this: I really liked the show. There were a lot of great, wearable pieces that I am sure will sell well. To a certain extent, there was some risk-taking for Nadège Vanhee-Cybulski that I completely appreciate. The silhouettes, the visual references, the reinterpretations: a lot really worked here. But to be honest, I did find the whole thing a bit disjointed, as though she was presenting more than one show; some of the shows I loved, and some, well, not quite so much.

What I saw on the Hermès runway was just this side of Robert Mapplethorpe’s Human Bondage Den mixed with Frau Farbissina meets Laugh-In with a touch of (sorry not sorry) Oscar the Grouch. One outfit gave me vibes of, shall we say, Hugo Boss circa 1943, while another was Daisy Buchanan as played by Mia Farrow… or the entire cast of Cabaret. You get the idea (I hope). One bit that was consistent was the bottom half – generally either striped pants or shorts with over-the-knee boots with socks in the same color as the boot coming up to mid-thigh. There were some flowy dresses and a few skirts, with a shorter boot. I feel that many of these pieces will work out of context; the outfits appeared somewhat costume-y, but the individual pieces would be wearable on their own.

The show started with a lot of this very leather + sheer + stripes look with some chain details. It was hard to ignore the S&M references. 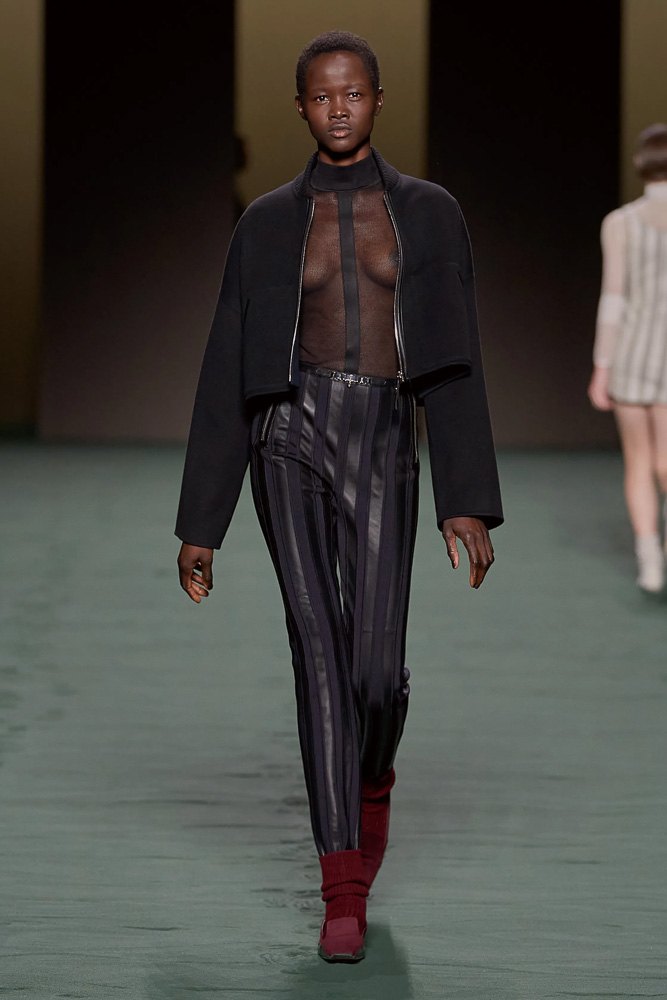 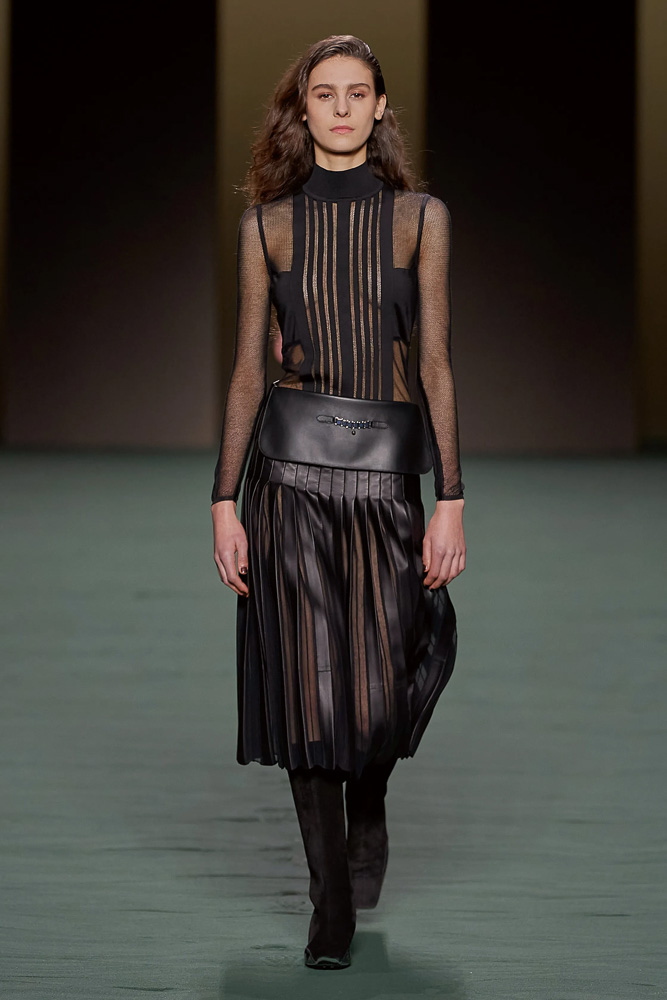 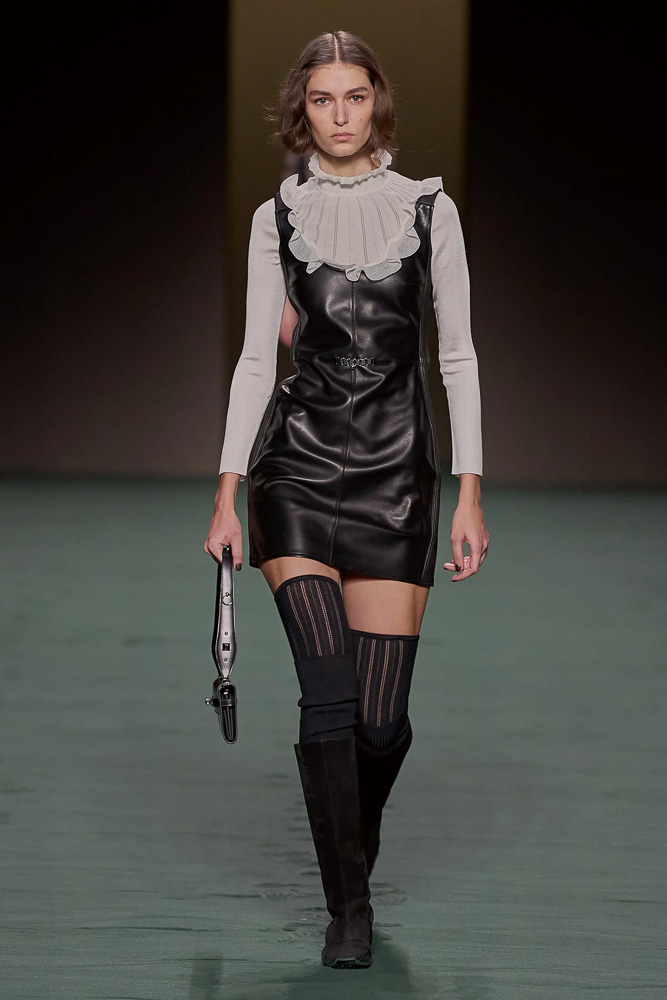 Look 8. The Swinging 60s Are Back, Baby! Frau Farbissina Would Approve. Photo Via Vogue Runway 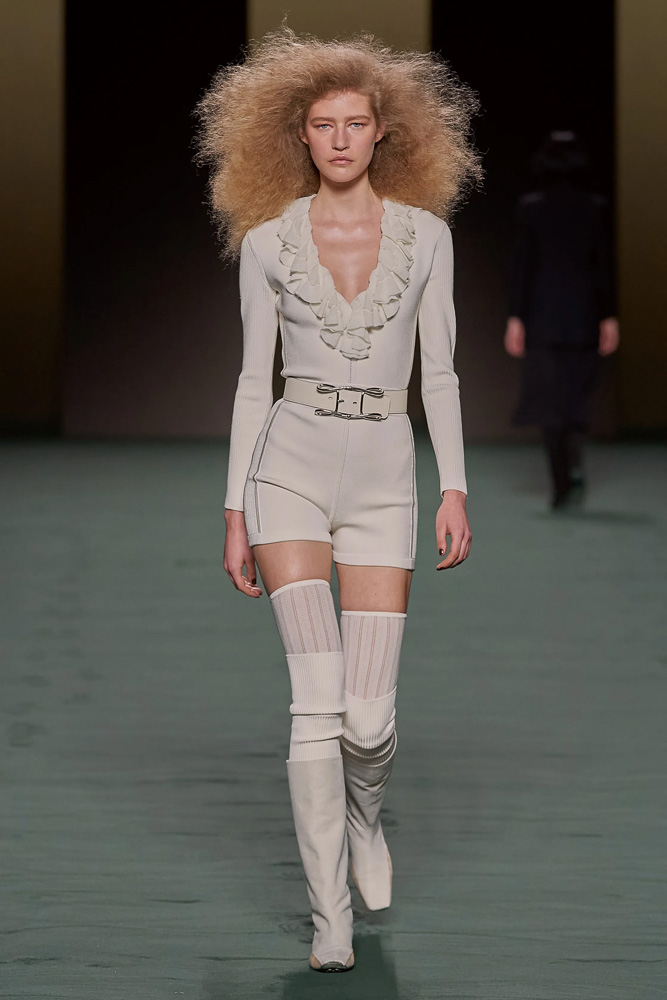 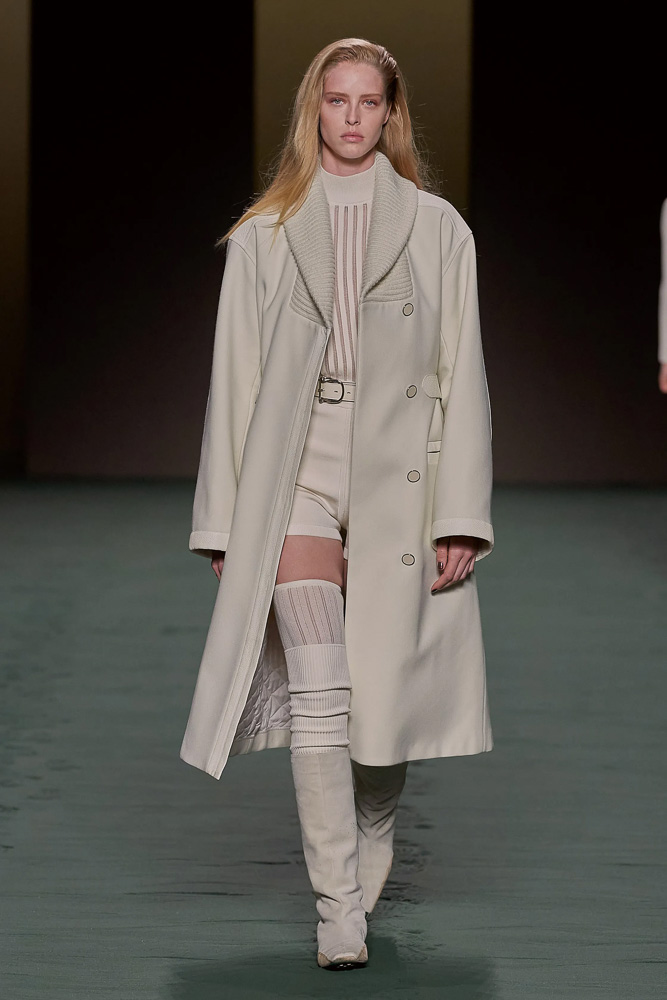 Then on to a completely different silhouette: flowy, soft, feminine. 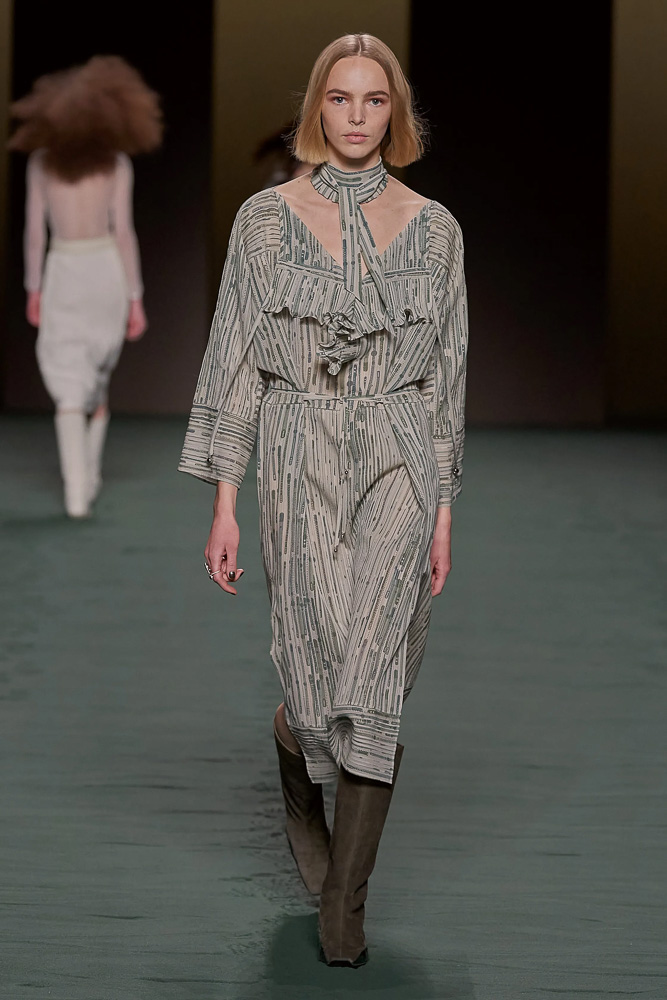 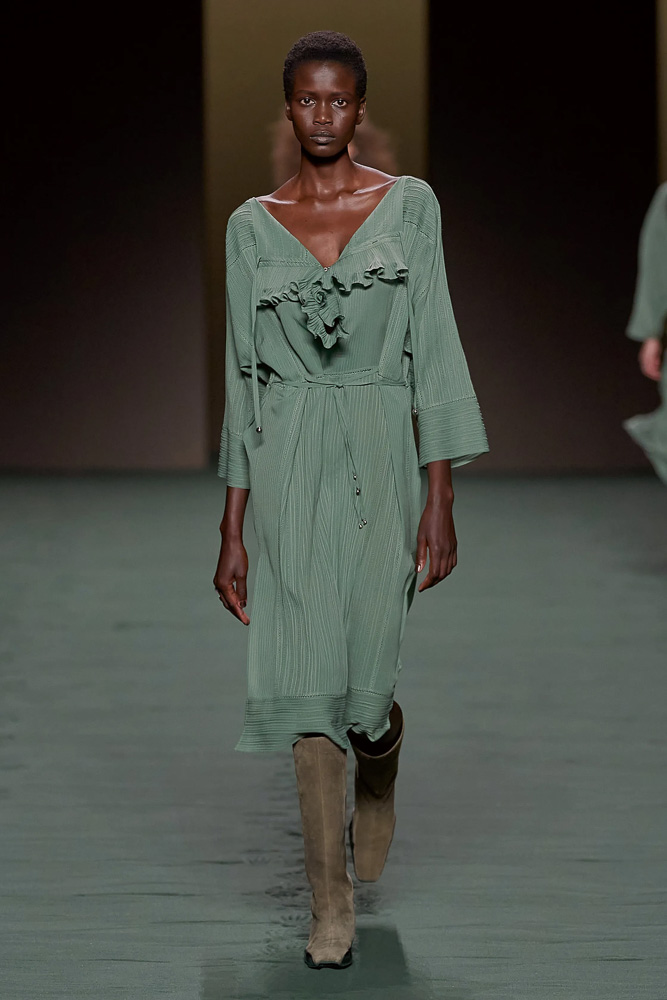 You will forgive my whiplash because this was next: 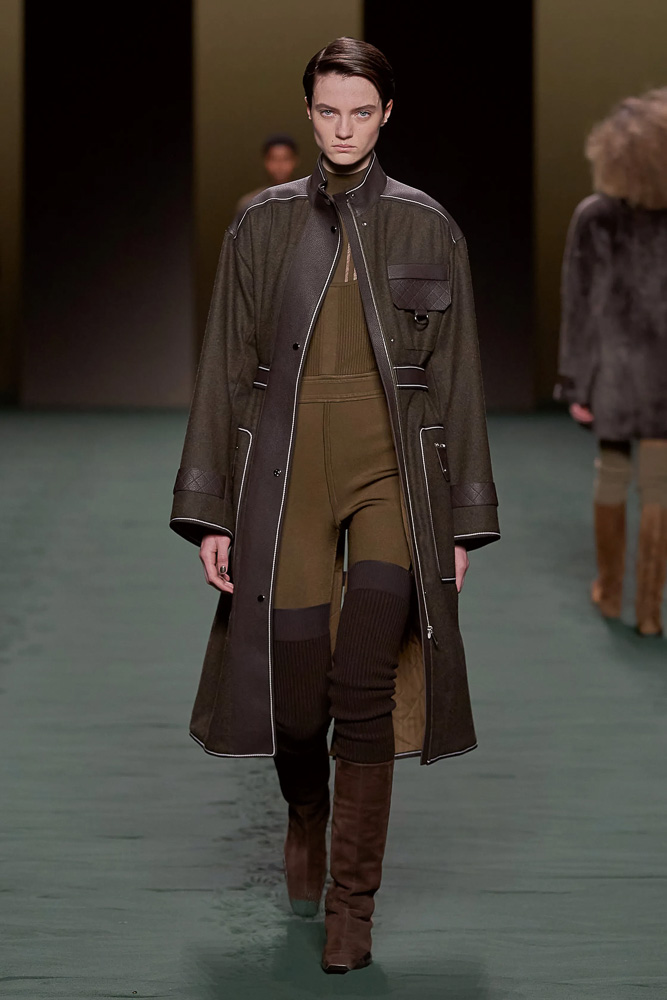 Look 52. Is No One Else Seeing What I’m Seeing Here? Photo Vogue Runway 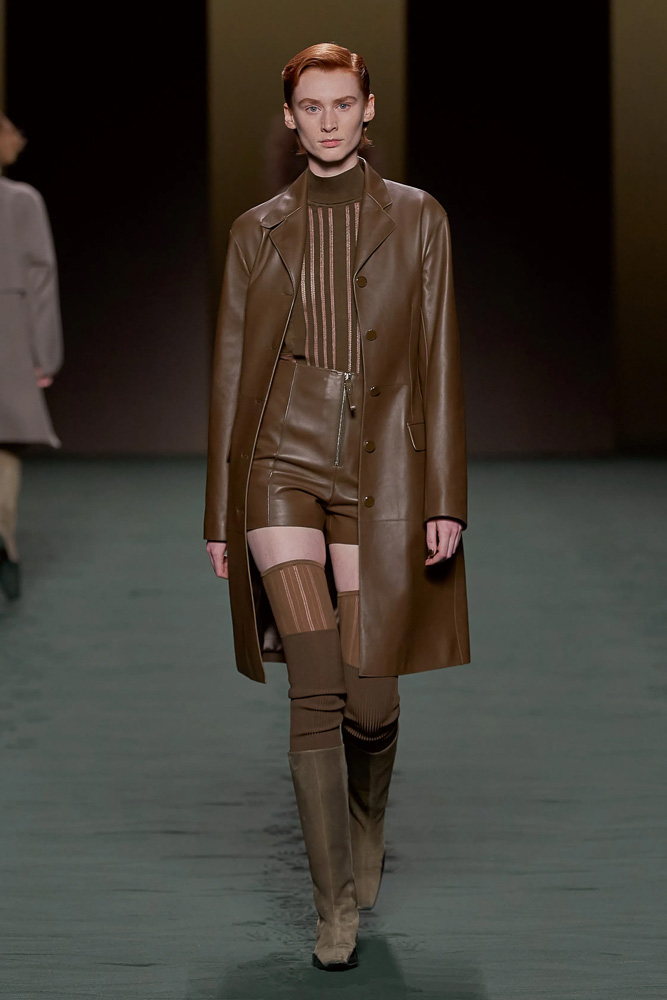 And finally, a series of outfits like this, which to me did not quite seem to go with the rest beyond color. 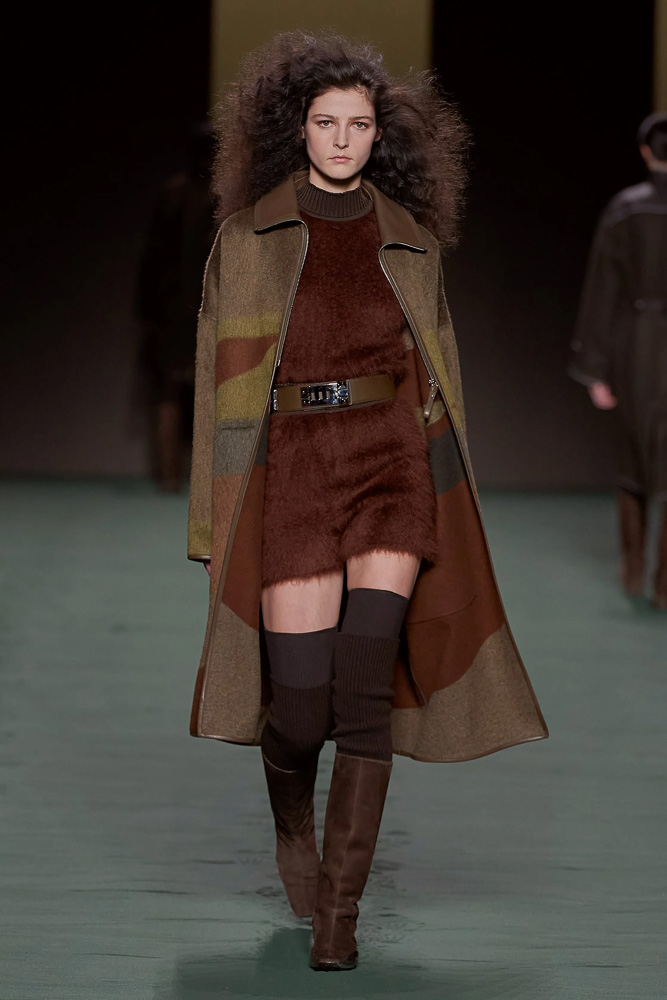 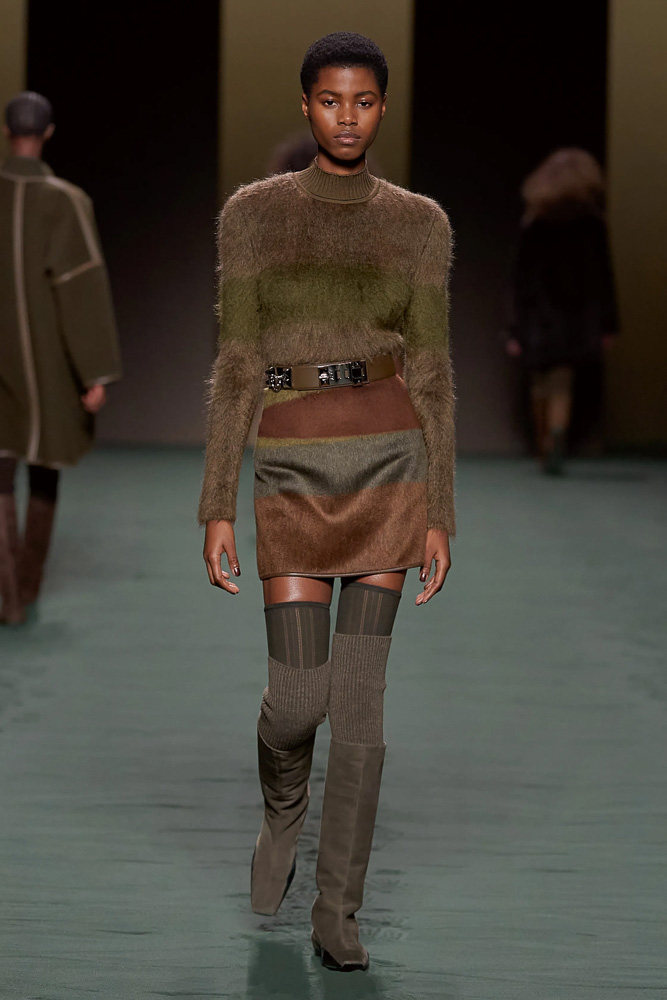 Look 53. “Vat is this, Muppet?” Photo via Vogue Runway

The Bags of Hermès Autumn/Winter 2022

You will notice that very few accessories went down the runway this time. The outfits were truly the show, with some notable exceptions via bags; interestingly, a few notable blockbusters did not go down the runway at all, but were presented at the re-see afterward. Again, to me, the selection of bags that did go down the runway seemed as varied as the outfits, although the one theme I did notice was the continual references to Hermès heritage.

For example, one bag was a take on the vintage Cadena bag: 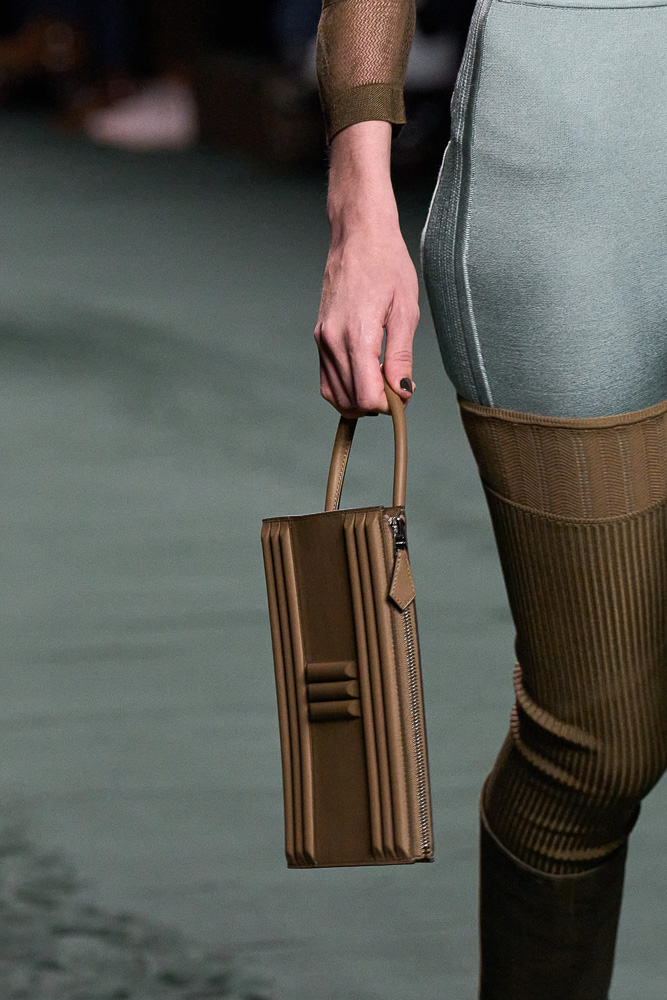 The Sole Handle On The Back Kinda Triggers My OCD. Photo Via Vogue Runway 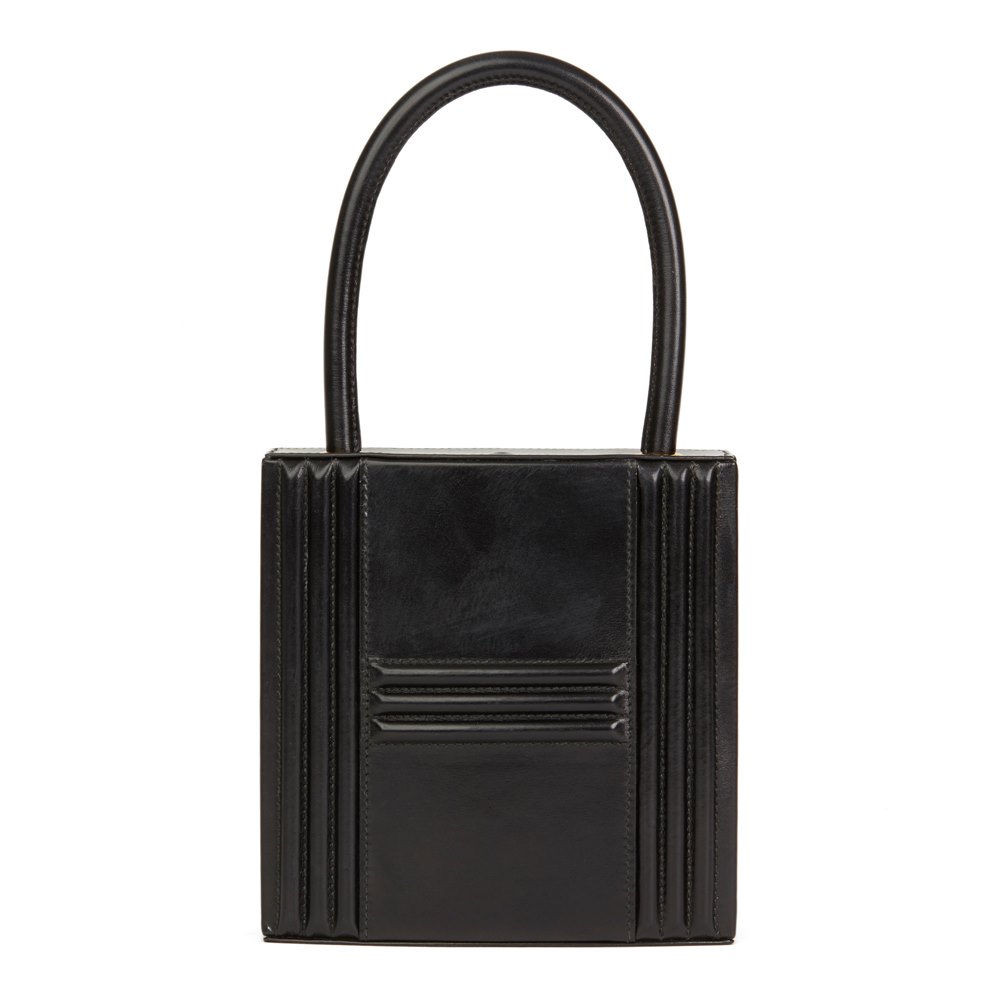 There was this new bag, which at first I thought was an interpretation of the Christine, but appears to me to emphasize the value of the Hermès zipper, which Hermès was the first to introduce to fashion. 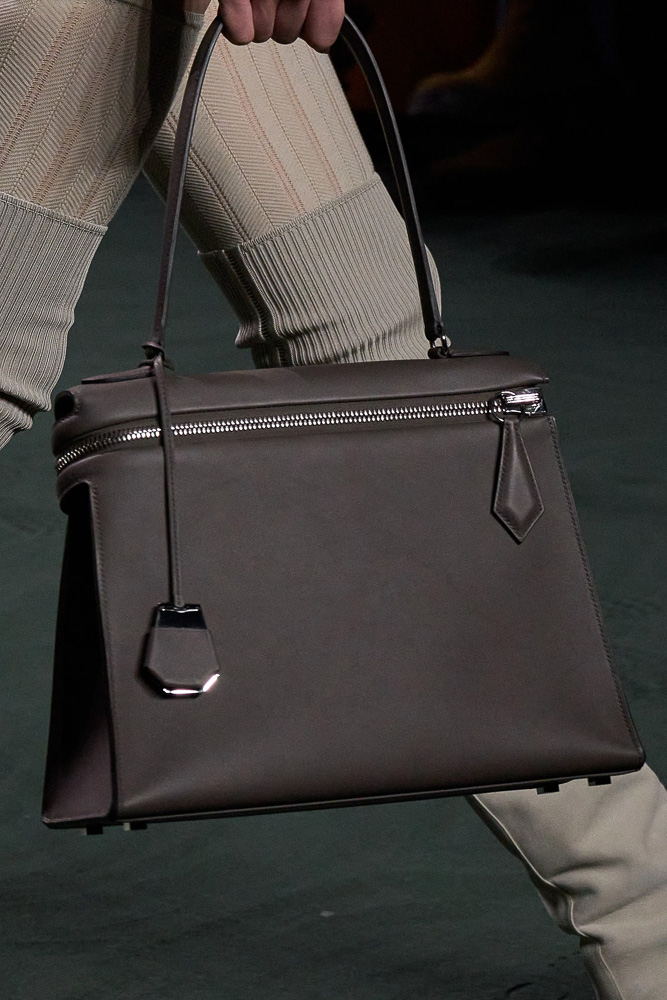 This was shown in a useful smaller version as well. 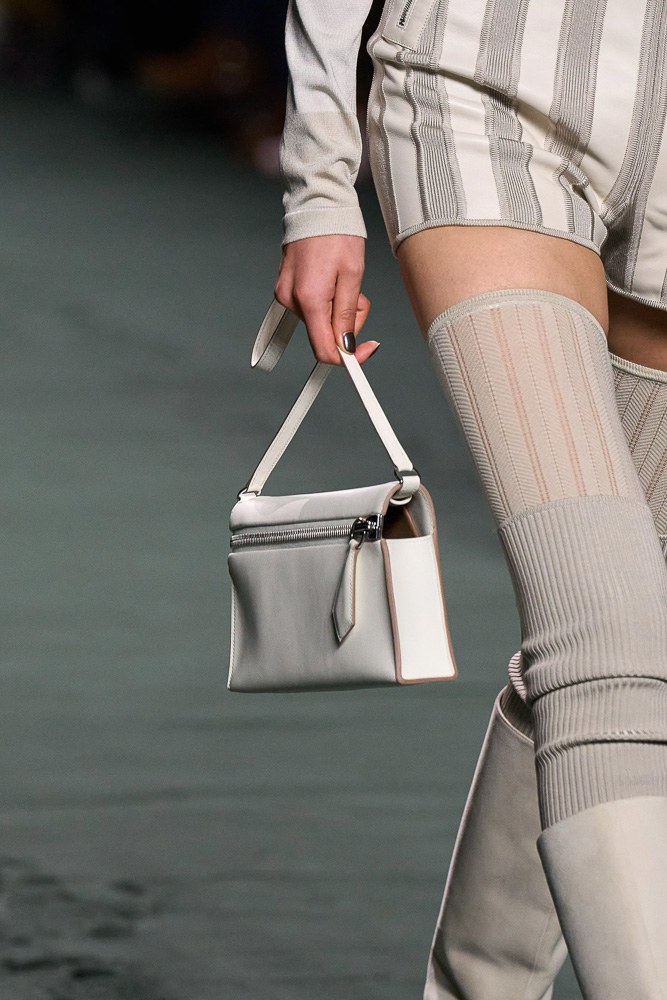 While not technically new, a wide-strap version of the Kelly-To-Go was also featured: 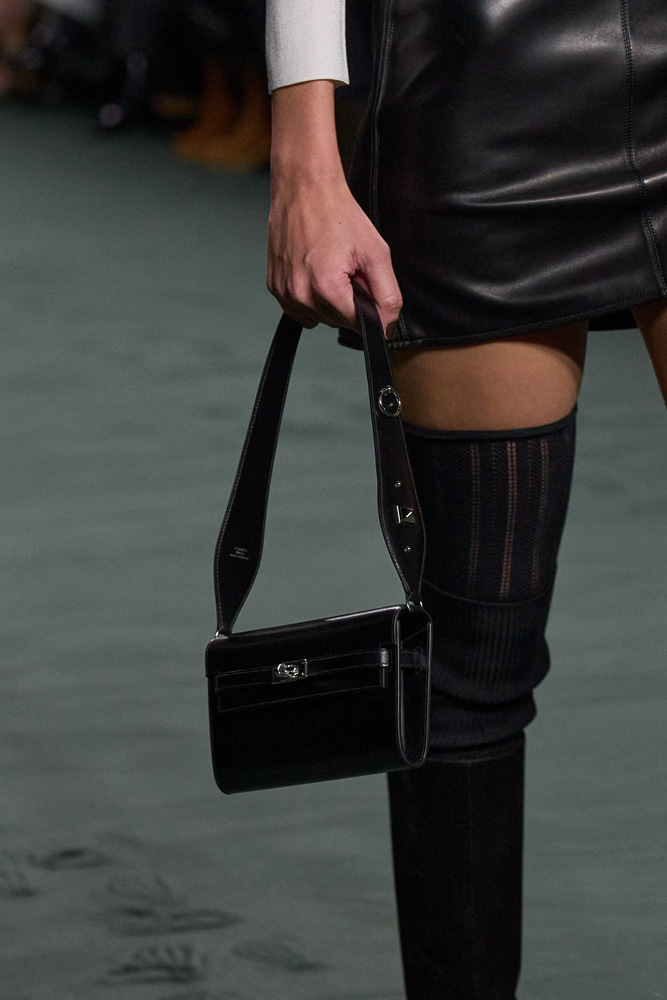 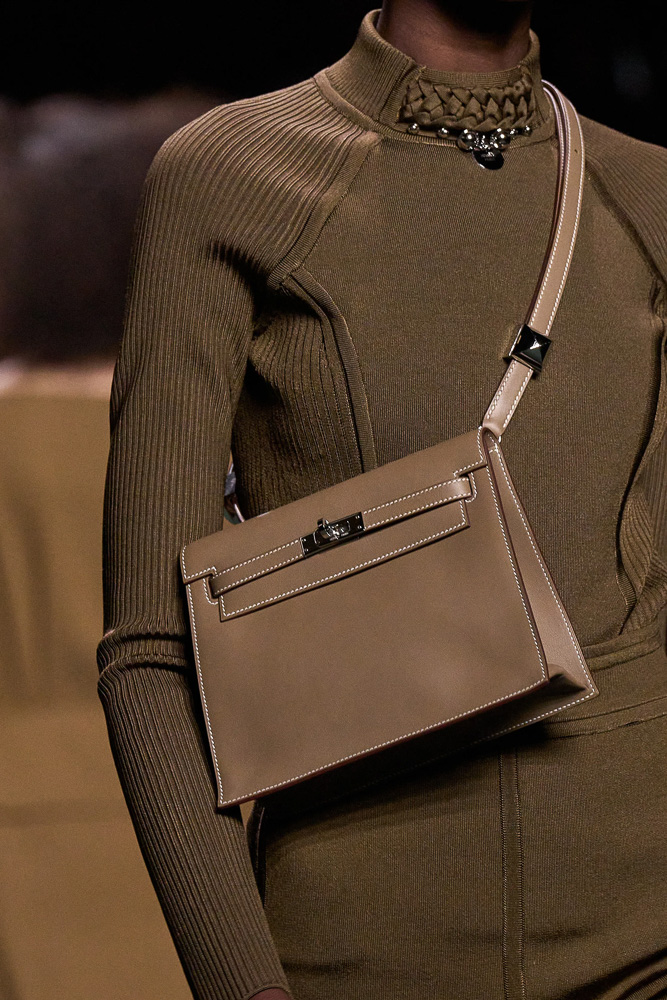 Now, of course, I’m saving the best for last. You know a thousand gasps ensued when this new iteration of the Kelly went down the runway: 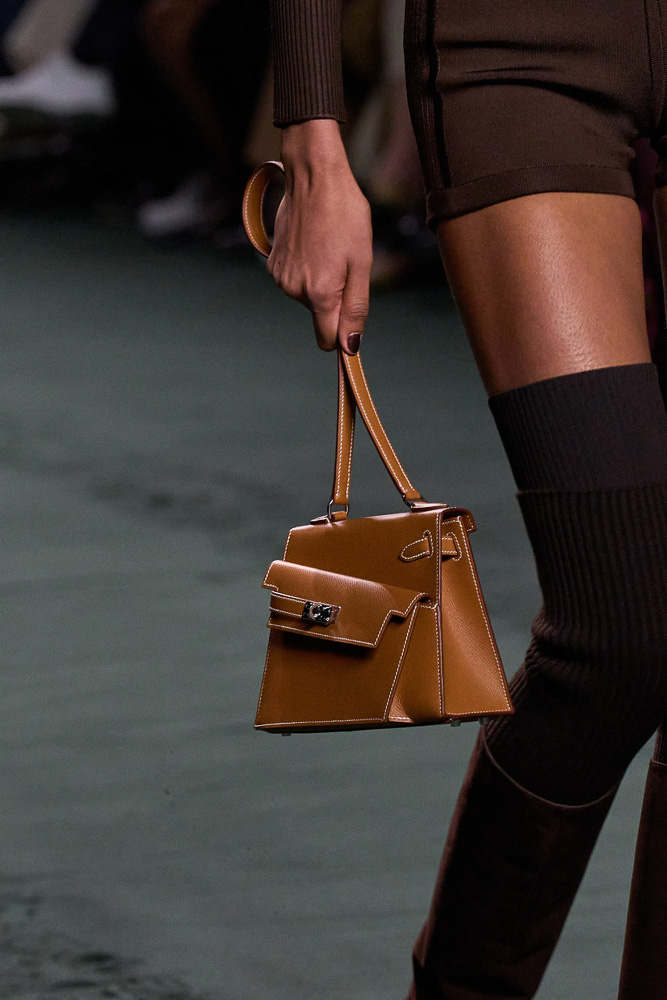 I’ll admit I wasn’t the hugest fan when I saw this – a lone dissenter! – but the Heritage value is undeniable. Even though I feel like someone out there in the design department took my rants against the Sac Himalaya as a personal challenge.

Surprisingly, this Kelly – called the Kelly Desordre – is not a lone interpretation. At the re-see, the series of Desordre bags were presented:

Bolide, Birkin And Kelly Desordre. This Photo Shows The Other Side Of The Kelly. Photo Via IG @Speciale

I will have to admit the Kelly Desordre is growing on me, as a whimsical version of a beloved design that doesn’t veer too far off into Louis Wain territory.

Two other fun interpretations of note were highlighted in the re-see; this fun version of the Bolide – 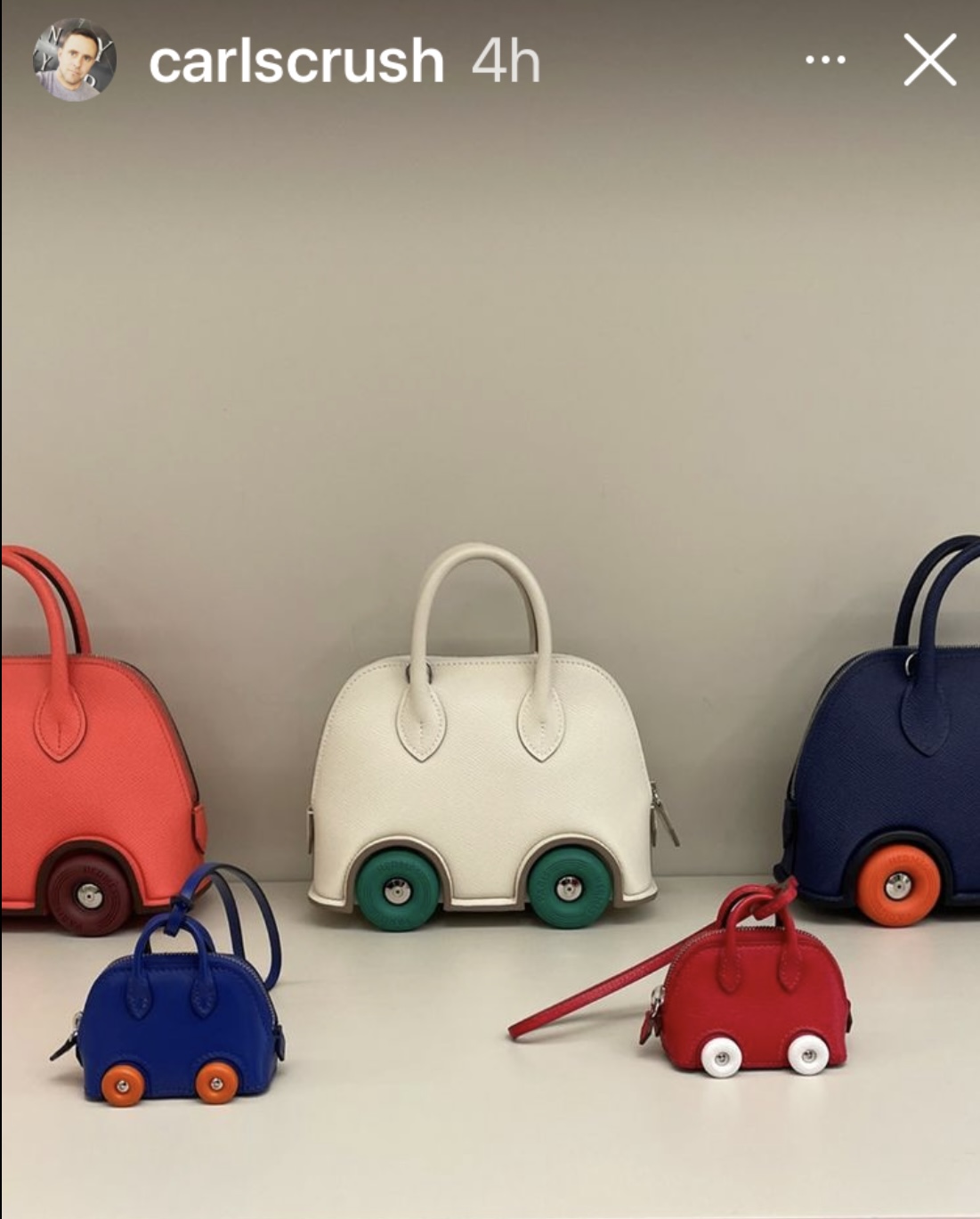 A Bolide on Wheels. Photo via Michael Carl, @carlscrush.

– and this mini version of the Chain Birkin I flipped over at the men’s autumn/winter show:

What are your thoughts on the new collection?

I love the bags, especially the zipper bag. It reminds me of the Celine Edge bag, only 100 times better. I hope nobody else likes it as I would like to buy one without having to wait 5 years or spend (another) $50K on “other items” at Hermes :-). I thought the runway show was very fresh, though some items were a little too out there for me. The flowy dresses were gorgeous. Thank you, as always, for your well written Hermes information!!

Thank you so much! I know this one was a little “out there”, but as always I have fun and the pieces were really cool. I’m glad you enjoyed it!

Come for the bags, stay for the witty pop culture references.

I’m the wrong person to ask about the bags, as I’m not particularly into the Hermes classic styles (though I appreciate the beauty of the craftsmanship). I loved the runway, though! The color palette, the materials…it felt very fresh to me. The brown shades and greens were dreamy.

It was a great show!

Loved the flowy and feminine pieces as well as a few of the leather pieces. But the colors just not what I would wear!

What I love most about Hermès is the brand’s ability to—almost infallibly—balance timeless elegance with unapologetic playfulness. For example, the Bolide on Wheels… well that’s not only a fantastic play-on-words… it’s also adorably quirky and fabulous!

The new bags are a lot of fun and I hope they are not so limited that we get to really see them. Some of the runway was indeed fabulous!

I’ll take look 22, 37, and the Kelly with the asymmetrical flap.

I love the men’s Birkin bag with the chain but I don’t know what I would do with it. And the asymmetrical Kelly bag is beautiful. I definitely love the zipper bags too

Bari – love your description of the show and the items in it – as always! Do you have any more pictures of the wide-strap Kelly to Go?