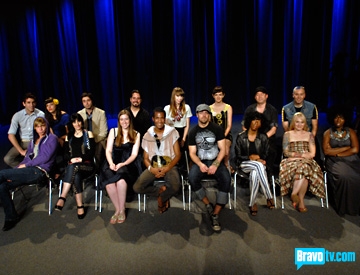 Hello again fellow Project Runway-ers, it’s that time of the week again: Amanda’s post-Runway roundup!Â  I’ve been following the pros at New York Fashion Week for the past few days, and now it’s time to take a moment to watch the amateurs try as hard as they can to pretend that they’re pros, too.Â  We didn’t get a whole lot of clues about the new challenge in last weeks preview – only that all of the designers go “awww” at some point, about something.Â  In commercials since then, we’ve learned that two of my all-time Runway FAVORITES (Christian Siriano and Daniel Vosovic) and, also, that other guy (Jay?) come back as guest judges and Heidi says, “Ooooo, dat’s baaad” in an adorably German way about something that is, surely, hideous.Â  So what in the world happened?Â

Well, first, Blayne wakes up and we hear him ask Suede, “Did you have any dreams?”Â  Suede makes some lame joke about Pop-Tarts, but all I can think is “YES BLAYNE, I DID HAVE DREAMS, AND THEY WERE THAT YOU GOT SENT HOME, AND YOU?Â  YOU JUST SHATTERED THEM.”Â

And then we find out that all of the crappy designers that got sent home already are back, and everyone has to work with one of them to create something avant-garde (woo!Â  I love the avant-garde challenges!Â  Screw regular clothes!).Â  As it turns out, these outfits have to be astrologically themed, for no apparent reason (other than that the PR producers have clearly run out of ideas).Â

But something wonderful happened – not only are BLAYNE and STELLA paired up (how craptastic is THAT outfit going to be?Â  It might redefine the term, I dare say), but butt-kicking TERRI and whiny gay Mormon KEITH are together!Â  Obviously this means that not only did the PR powers-that-be want Keith off the show, but they’re clearly attempting to have him killed, because Terri is going to eat him.Â  And I will save it on my Tivo and watch it over and over again and laugh, because I hate him.

It’s impossible to know if anyone is going to suck when they’re looking around the workroom, but I feel pretty confident saying that Kenley’s is going to be, uh, not good.Â  The outfit looks like she’s trying pretty hard to be both Christian Siriano (and honey, she is no Christian – there can only be ONE Princess Puffysleeves) and Diane Von Furstenberg rolled in to one, and it doesn’t look like it’s gonna work.Â  She’s working my nerves lately with her annoying laughing (and her general existence), so I wouldn’t be sad if this didn’t work out for her tonight.

And then they get a note – they have 4 fewer hours than originally planned, and TWO DESIGNERS WILL GO HOME!Â  Finally, some serious thinning of the herd.Â  If there is any justice in this world, both Blayne and Suede will go home in one fell swoop, and they will drag Keith’s lifeless body out with them.Â  Another surprise is that not only are the designers mentioned in the commercial judging, but so are a bunch of others from past seasons – way too many to mention here.Â

So, it’s that time again – who sucked and who didn’t?

Well, as predicted, Kenley’s was terrible.Â  It looked like a costume for a character at Disney World and the top seemingly had no connection to the bottom – I agree with the judge’s assessment that it looks like it came not only from two outfits, but from two completely different designers. I also had no idea whatsoever what sign it was supposed to represent.Â  Kenley continued to argue with and interrupt the judges, but she won’t go home tonight, because there were at least 3 outfits worse than hers.

Speaking of Disney costumes, sadly, Terri (and the loathsome Keith) made a dress straight out of Aladdin.Â  It looked like I could go to Party City and buy it for $49 and all I would need is the luxurious black polyester wig to be Jasmine.

Suede and alpha-loser Jerry made kind of a diaphanous silk pantsuit that wasn’t a horrible piece of clothing, but not at all avant-garde by any stretch of the imagination.Â  Michael Kors also totally called him out on the third-person BS (I can’t believe he referred to himself as ‘Suede’ on the runway in front of the judges), which means that I want to have a cocktail with him even more.

Also as predicted (because I have powers of logic), Blayne and Stella created a disasterÂ  that’s almost beyond comprehension.Â  The body piece looked like some kind of ill-fitting vintage body diaper strapped on with many belts (LEATHA!), but the leg and arm pieces were kind of garish and flamenco (and, seemingly, from a completely different outfit.Â  An outfit that, I’m sure, was also bad).Â  In a sea of bad outfits, this was the clear loser for me tonight.

They were the bottom 3, as they should have been, and the first axe to fall?Â  It falls on BLAYNE!Â  Rejoice.

But only for a moment, because we have a travesty of epic proportions on our hands here.

The second axe doesn’t fall on Suede.Â  It falls on Terri.Â  WHAT?!?!?!Â  Up until now, Terri has had nary a misstep and, if memory serves, hasn’t even been in the bottom two previously.Â  She’s won at least one challenge and almost won several more, and she generally makes well-tailored, pretty clothes.Â  Suede tends to make things that any average mom with a sewing machine could home-sew (but they wouldn’t, because they have taste), and I absolutely abhorred the dress he made for the one challenge that he DID win.Â  Suede is a pooh-head and should obviously go home, but God hates me, so Terri leaves instead.Â

On to the people that made nice clothes, although this is kind of joyless for me after the loss of Terri (she was in my final 3! I call SHENANIGANS on all of this!):

Leanne (and whatever loser she was with) rocked it yet again this week.Â  Her scorpio dress was avant-garde and thought-provoking, and it evoked the astrological sign without being too literal.Â  To me, she was the winner again this week, but the judges didn’t agree.

So who DID win?Â  Jerell.Â  And the more I look at his outfit, the more I like it.Â  I adore the little gold top (both its shape and its fabric were perfect), and the tailoring of the skirt is impeccable, particularly for such a thick material that must have been difficult to sew.Â  The jacket was also beautifully detailed and executed.Â  Ok, nevermind, I just talked myself into believing that Jerell was the correct choice after all.Â Â  In a world where Terri gets sent home before Suede, I don’t know what to believe anymore.

As far as next week…I can’t even remember what’s going to happen.Â  They’re going to make some clothes maybe?Â  For teachers?Â  Did I hear something about teachers?Â  Hopefully there will be no male teachers, because I’ve dated 4 male high school teachers in the past year and a half and, well, apparently spending all day with 14-year-olds will make you a tad nutty.

But I digress.Â  This shock has turned me into a babbling fool.Â  Why, Nina and Michael (and, also, Calvin Klein dude whose name I actually DO know but am too pissed to mention), why did I have to sacrifice Terri in exchange for getting rid of Blayne?