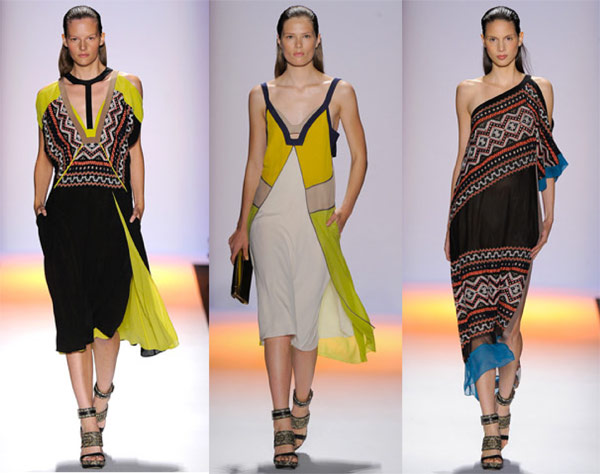 All photos via Style.com

Because BCBB Max Azria is a brand that’s so widely carried an advertised, most of us probably have some preconceived notions about what the brand’s collections will look like: pretty, contemporary, wearable. While those adjectives translate into strong retail sales, they can sometimes make for a forgettable runway, which is a problem for a collection that’s shown so early in the show season. For Mercedes-Benz Fashion Week New York Spring 2012, though, Azria took a page from another New York designer, and I can’t help but feel a tad excited. These are not clothes I’ll forget by the end of the week.

Is it just me, or can you feel the specter of Proenza Schouler looming over this collection? And that’s meant in the best way possible; what we see here are edgy, modern clothes that don’t lose the wearability for which BCBG is known for even a second. The maxi dresses in particular, with their mix of patterns and solids, neutral and brights, will surely be a favorite by the time 2012’s warm season rolls around. A gallery of show highlights, after the jump.