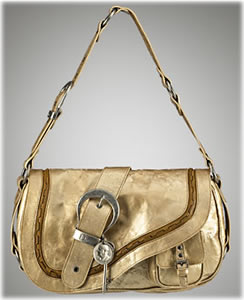 It may seem that I am on a metallic kick. Well, partially I am. There is just something about a metallic bag that makes me really and truly think summer is here. I don’t think I can get enough of the metallic goodness there is to offer, especially if it involves Dior ;-) The Dior Gaucho Washed Metallic Leather Medium Saddle Bag (wow that is a mouthful) bases itself on the highly sought after Gaucho bag with a fun touch of gold metallic washed leather. The hardware on this bag, as you already know, is chunky which accents the saddle features perfectly. There is antiqued silver metal links and a buckle on the shoulder strap, a Dior medallion and large key on the front, and buckle detail on the front flap. How about that for some bling bling? As far as space goes, Dior has made sure to give you every ‘holder’ possible. There is a cell phone pocket under the front flap, a back pocket with a magnetic snap, and open compartments inside. This is a bag that has already been made popular in a trendy metallic shade that just can’t seem to go out of style. Buy this beauty via eLuxury for $1660. Also, there is the large Double Saddle version for $2070 also available via eLuxury.