Blog Debates: Is it disrespectful to depict a bag with the animal from which it came? 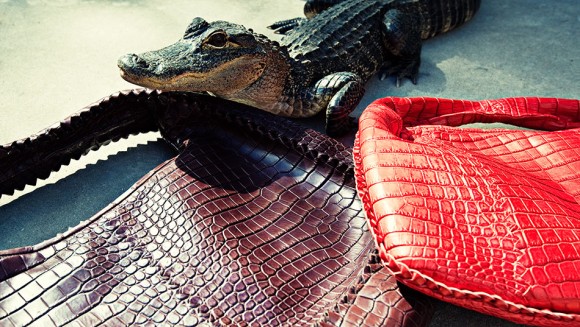 It seems as though we had a bit of a kerfuffle on our hands over the weekend.

On Friday night, Megs posted pictures of two bags as the last in our 12 Days of Bottega Veneta series. The bags were made of crocodile and depicted with Wally the Stunt Alligator, a resident of the Everglades Holiday Park in South Florida. Note: Wally was not harmed in the making of this (or any other) post.

Despite that, reactions to the photos were decidedly mixed. Some people found them beautiful and thought provoking, while other commenters left messages on the blog and Facebook that ranged from “unacceptable” to “perverted.” With reactions that disparate and opinionated, we couldn’t help but have an official Blog Debate.

One commenter brought up that Wally might think that the bags were his mom and dad, so let’s dispatch with that issue right away – alligators and crocodiles don’t have the cognitive ability to recognize a handbag as being made of an animal that’s similar to themselves. Even if they did, gators aren’t exactly cuddly family creatures; when in the wild, they very often bite, maim and kill each other. That’s why it’s so hard to find good alligator and crocodile skins for bags – even in captivity, it’s difficult to stop them from attacking each other in ways that create serious wounds (and later, serious scars).

Taking those things into consideration, I don’t think we managed to hurt Wally’s feelings. Indeed, it could be argued that anthropomorphizing Wally into a creature that’s capable of human emotions serves him a greater disadvantage than recognizing his innate alligator-ness. Ascribing to him complex emotions of which he is not capable is not advantageous to him in any way and merely makes those that do it feel more satisfied with their own sensitivity. I’m sure that Wally is perfectly satisfied with his own alligator thoughts.

An issue that was brought up more often is that of respect. Is it inherently disrespectful to depict an animal with objects made from similar animals? I don’t think so, but certainly many commenters disagreed with me.

In my estimation, it would be far more disrespectful to completely divorce the idea of animal products from the animals that died to make them. Removing any reminder of the crocodile from the depiction of a crocodile bag only makes the animal’s life less significant, and it only makes it easier for consumers to forget that something died in order to make the products that they wish to consume. Certainly some people do wish to forget entirely that living things died for their bags, but it’s not our job to facilitate it. People that find the thought so ghastly may want to reconsider the role that animal products play in their lives.

So what is our job? Well, Vlad’s job as a photographer (philosophically, at least) is to capture images that elicit some sort of reaction when people view them. Whether those reactions come because the photos are beautiful or because they stir up some other kind of emotion in the viewer is not entirely relevant to his goals – the reaction itself is the goal, and if the photos provoke thoughts and emotions, then it has been accomplished. Art’s success is not necessarily predicated on its positivity.

As for the rest of us, our job is to create a context within which we can all think about bags, fashion and accessories. The fashion industry is a behemoth, and it affects the lives and livelihood of not just animals, but humans at every level of society and in every corner of the globe. Losing that perspective on the things we consume would be irresponsible and short-sighted, but retaining it is not always pleasant and pretty. If Wally’s afternoon in the presence of a few crocodile bags can remind us all of those issues, then I think he has managed to make himself a very important alligator.

But this is, after all, a blog debate. Let us know how you feel about the issue in the comments.

Should You Snag An Animal Print Bag For Fall?Tom Ford Goes All In on Animal Print and Rhinestones for His Fall 2018 Runway BagsThese Anya Hindmarch Animal Bags are the Cutest Novelty Designs We've Seen in a Long TimeRecapture All Your 90s Teen Dreams with This Dolce & Gabbana Stuffed Animal Backpack
Amanda Mull