The Many Bags of Lady Gaga 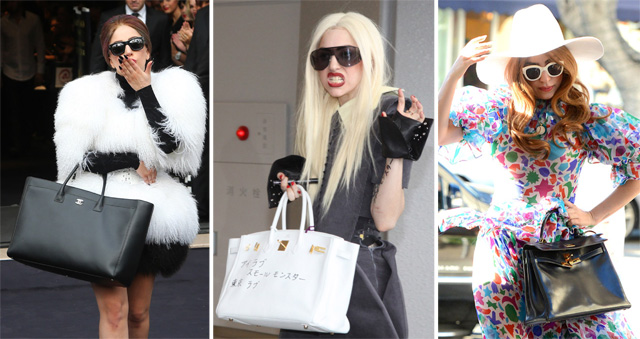 Oh, Lady Gaga. She’s just irrepressible, isn’t she? I used to be a major Gaga fangirl back in her early days (I went to see her for the first time long before she was playing arenas, I swear), but now she’s just kind of…tiring. And I like Katy Perry’s new single better. (Yeah, I said it.) Still, Gaga’s consistently one of the most interesting real-life fashion installations we have to gawk at, and gawk we shall, now that Gaga’s recovered from a hip injury and back to shepherd her Little Monsters into the last half of 2013.

We’ll start at the beginning, back when “Just Dance” was everywhere and Gaga could still make sartorial waves with a simple latex ensemble. The first bag we could find her with is the now-discontinued Yves Saint Laurent Easy Tote. Shop Saint Laurent via Saks. 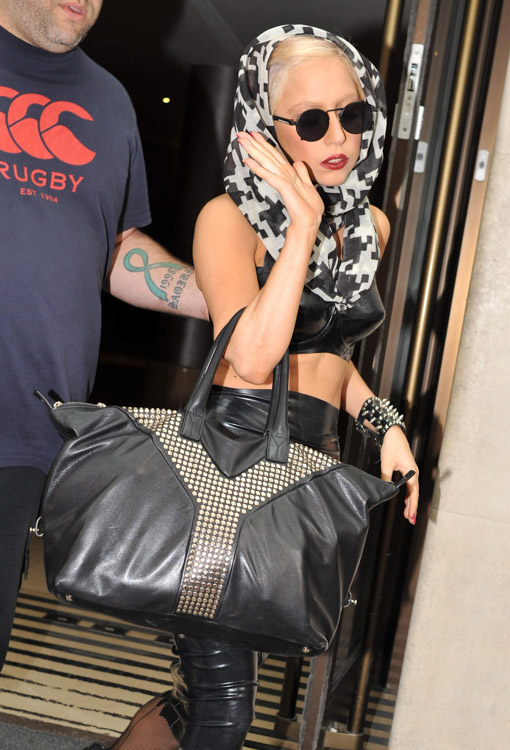 It wasn’t long before Gaga was a fashion-industry darling – she made a big splash by arriving late to a Marc Jacobs’ show (carrying a Marc Jacobs Thrash Clutch, natch). Shop Marc Jacobs via Net-a-Porter. 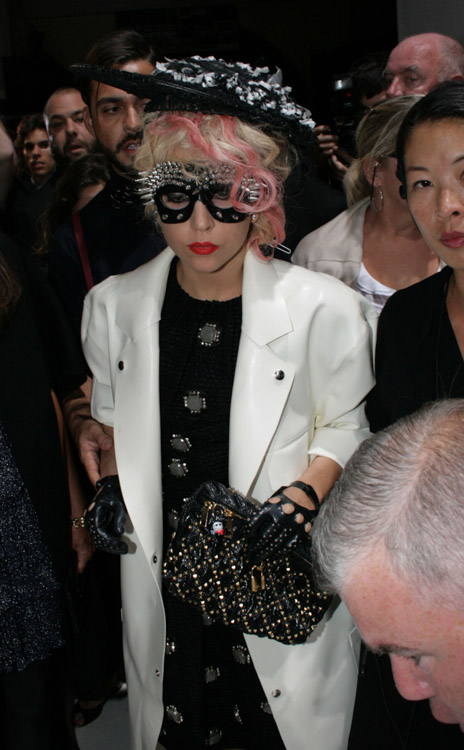 Before long, other designers came calling for some Gaga-centric publicity. When standing next to Donatella Versace, it’s important to be carrying a Versace Medusa Clutch, one would expect. Shop Versace via Net-a-Porter. 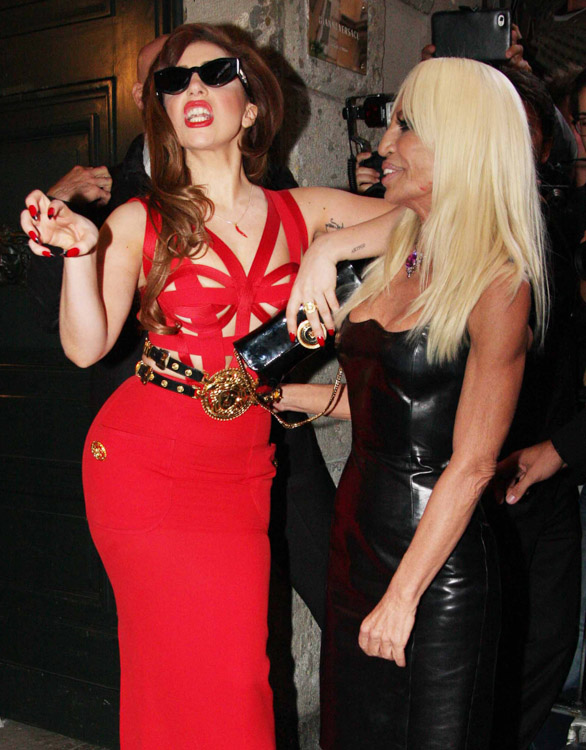 Gaga’s entire outfit in this photo is Versace, so although we don’t have a for-sure bag ID, Versace would be my educated guess. With that giant, spiked gold cross, it certainly seems plausible. Shop Versace via Net-a-Porter. 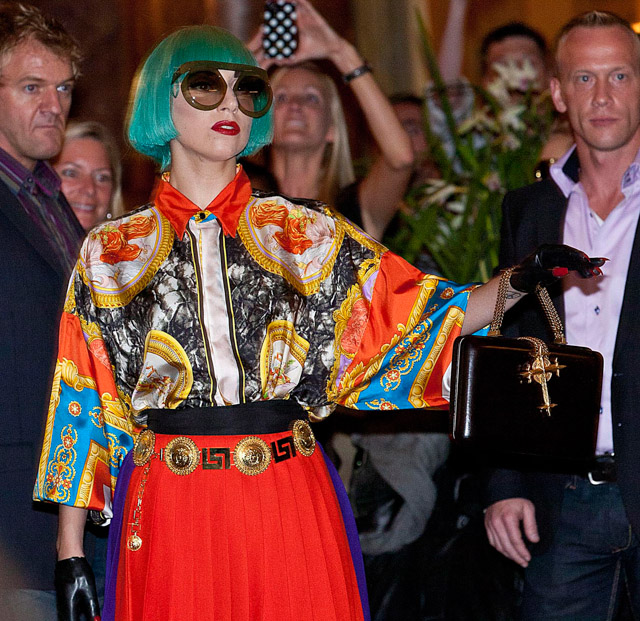 Gaga likes to dress head-to-toe in a single designer quite a bit, of course, and it’s often in the designer’s most distinct runway looks, like this houndstooth Ferragamo situation. It’s topped off with a matching Salvatore Ferragamo Houndstooth Clutch. Shop Ferragamo via Neiman Marcus. 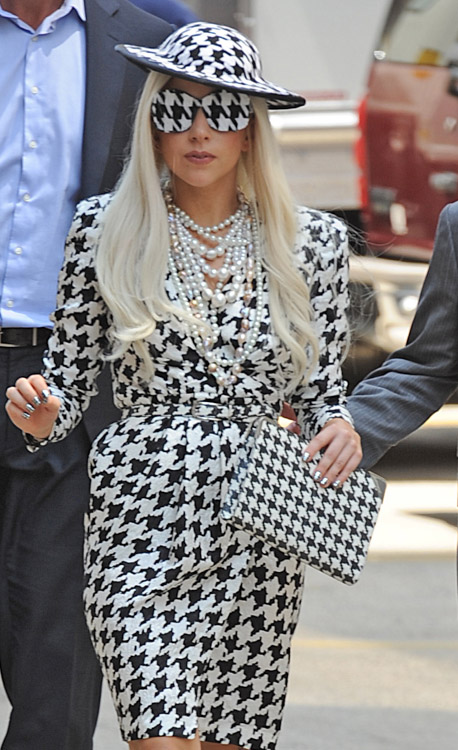 When going to a private Alaia event, what does one wear other than Alaia? Gaga chose an Alaia Cutout Clutch as well. Pick up a similar Alaia clutch for $1,870 via Net-a-Porter. 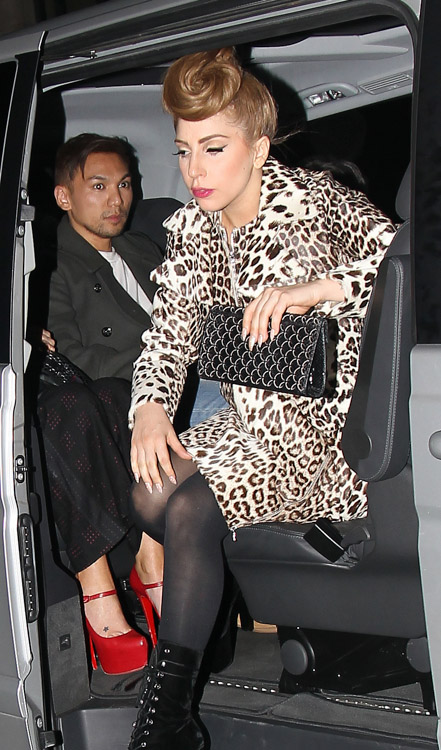 Despite the ubiquitousness of this photo of Gaga coming out of Armani in a freshly purchased hot pink fur coat that perfectly matched the rest of her outfit, I’ve never been able to find any confirmation of whether she wore the rest of the pink clothes into the store and bought the coat because it was such a perfect fit, or if she bought the entire outfit, including the perfectly matched bag, along with the coat. Why won’t the Internet tell me everything I want to know? 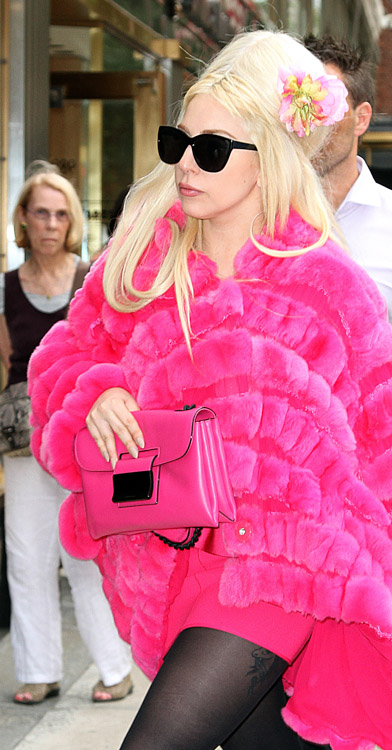 For a while, Gaga carried and wore a ton of Chanel, including this custom-made Chanel Camellia Evening Bag that the brand provided for the launch of her Barneys pop-up shop. 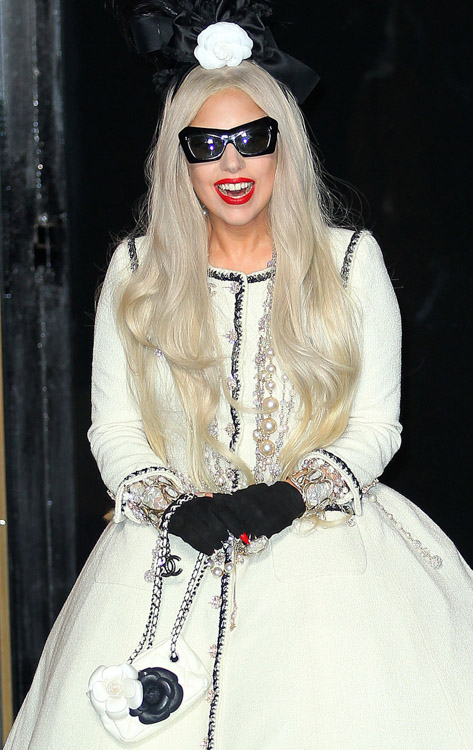 On the complete opposite end of the size spectrum, here we have Gaga with the biggest Chanel Cerf Tote I’ve ever seen. Shop pre-owned and vintage Chanel via Portero. 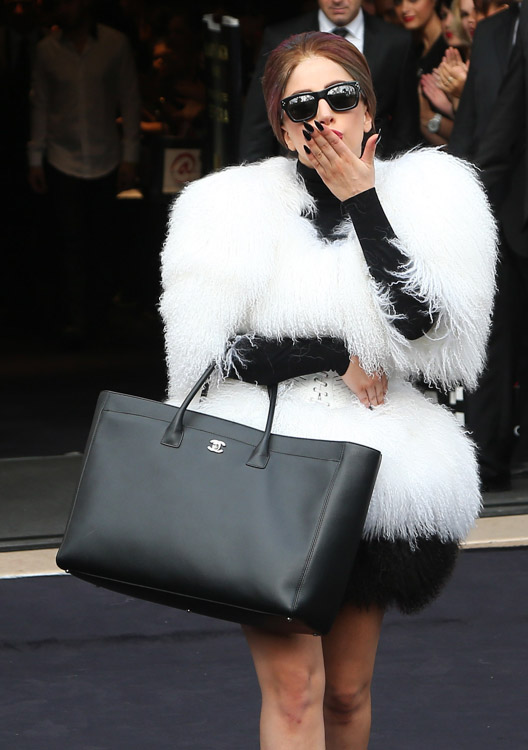 Not too big, not too small, but juuuuust right – Gaga’s Chanel Mademoiselle Bag, that is. 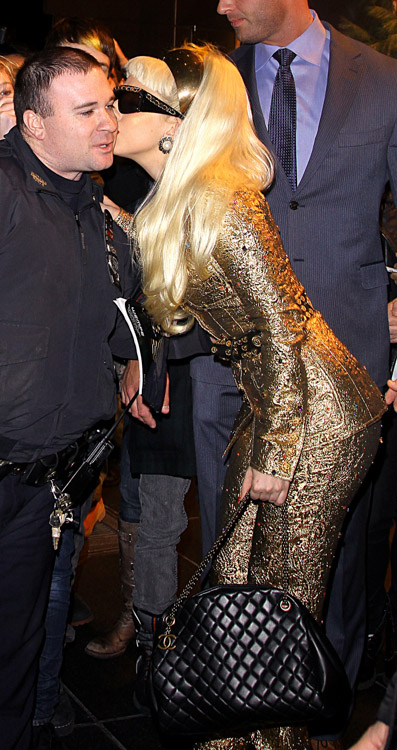 Then we’ve got the classics, like this Chanel Mini Flap Bag, which worked perfectly for the two weeks that Gaga only wore black and gold. 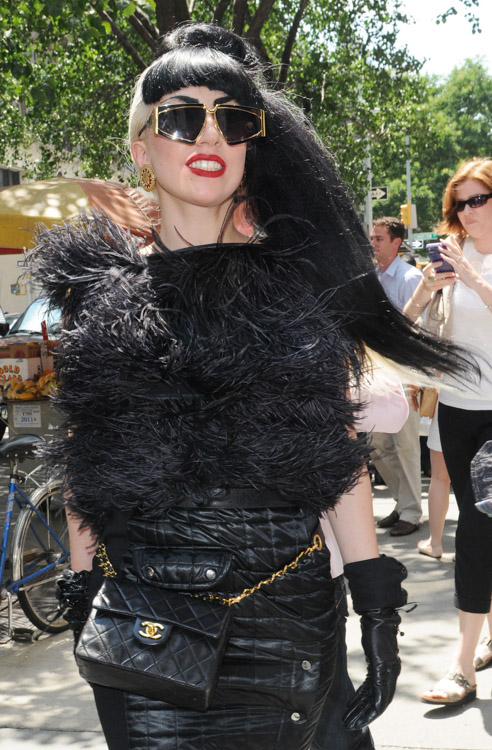 Of course, no celebrity Chanel collection would be complete without the Chanel Classic Flap Bag in black. 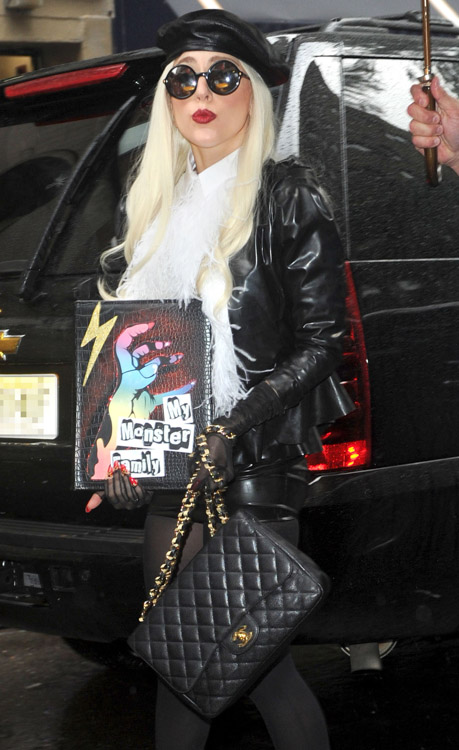 I had it in my head that this bag was Mugler, designed by Gaga’s stylist and friend Nicola Formichetti, but now I can’t confirm that. Thoughts? 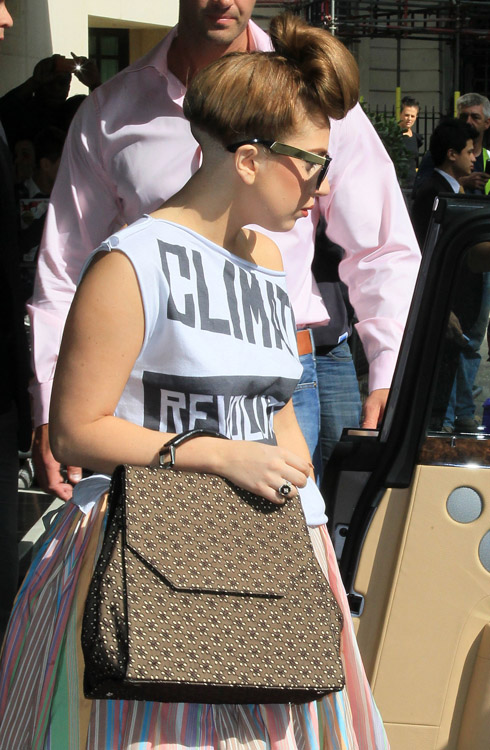 Also in the realm of the unidentified: Gaga hasn’t been carrying many bags at all lately, but we did catch her with this little black clutch during her recent promotional tour for “Applause.” 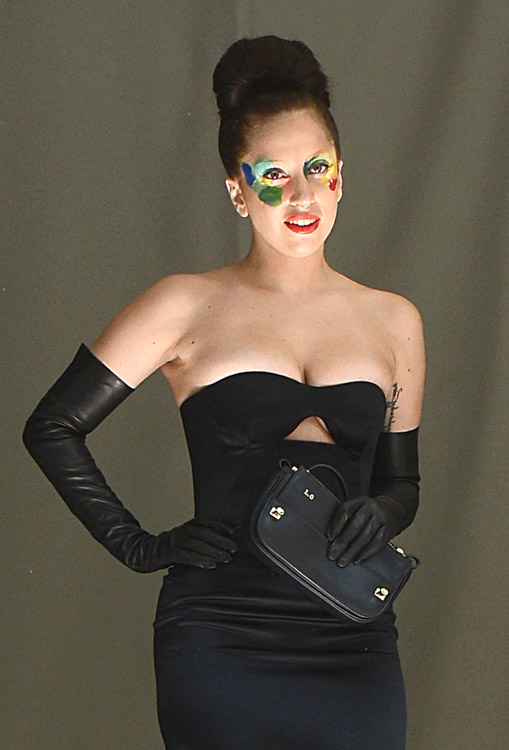 Gaga also had a stint where she carried a teacup and saucer instead of a bag. Remember that? Why are things so strange? 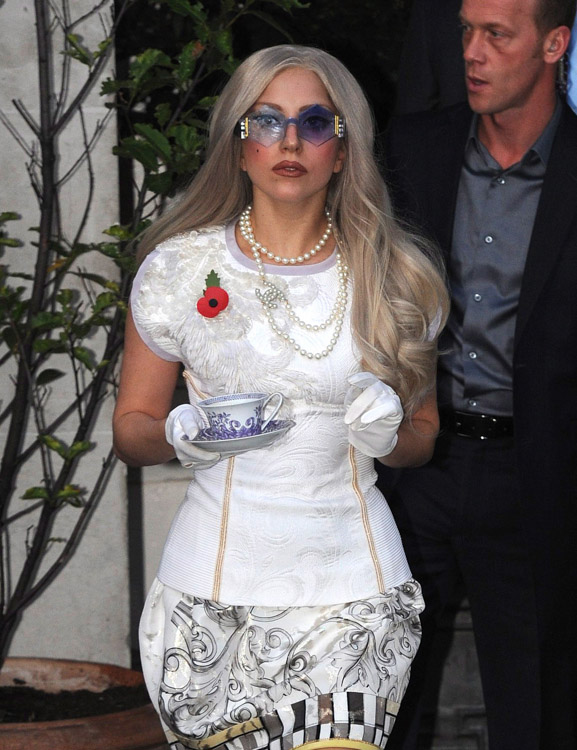 And then, of course, there’s the Hermes. No one gets as rich and fashion-obsessed as Gaga without accumulating some Hermes, and Gaga’s most famous handbag moments have definitely been from the venerable French brand. Here, a relatively subtle vintage Hermes Kelly Bag. 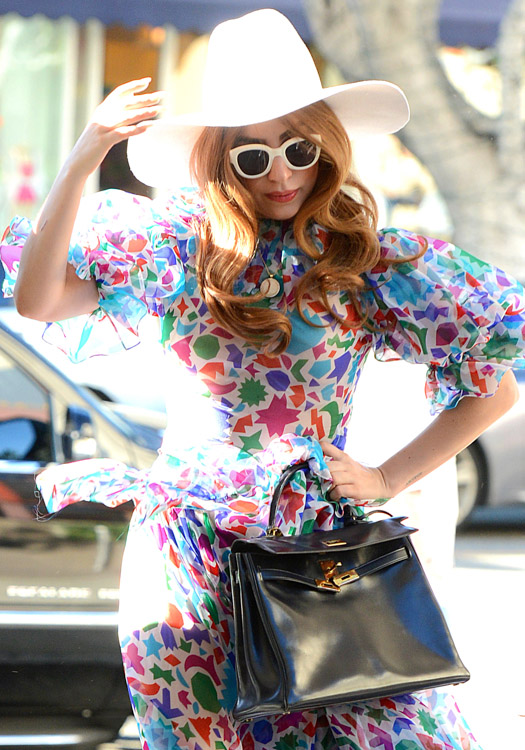 Where things really got weird for Gaga’s handbags were the Hermes Birkins. First, an orange version carried by her body guard. 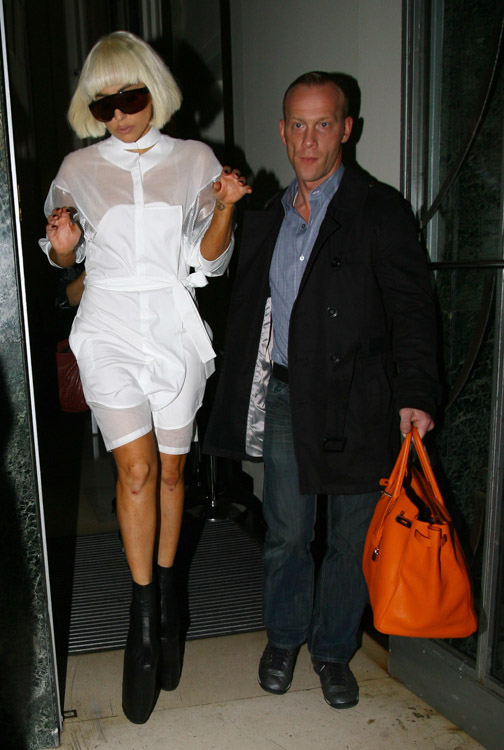 And then Gaga had a Japanese message to her fans written in Sharpie on the visage of her white Hermes Birkin. 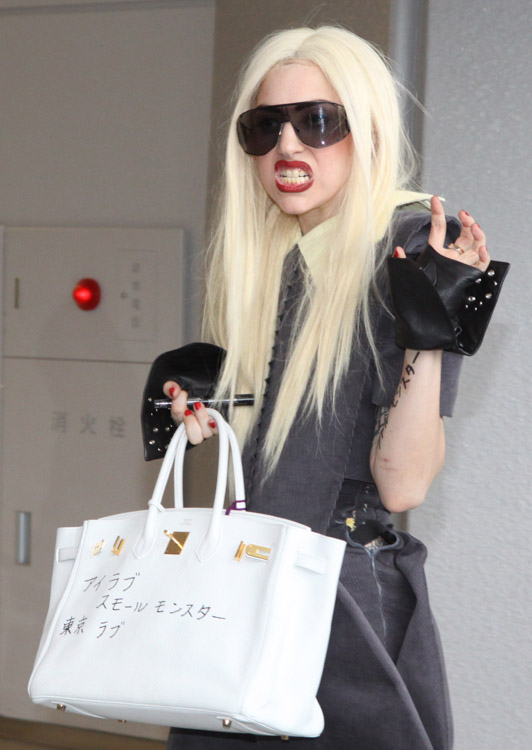 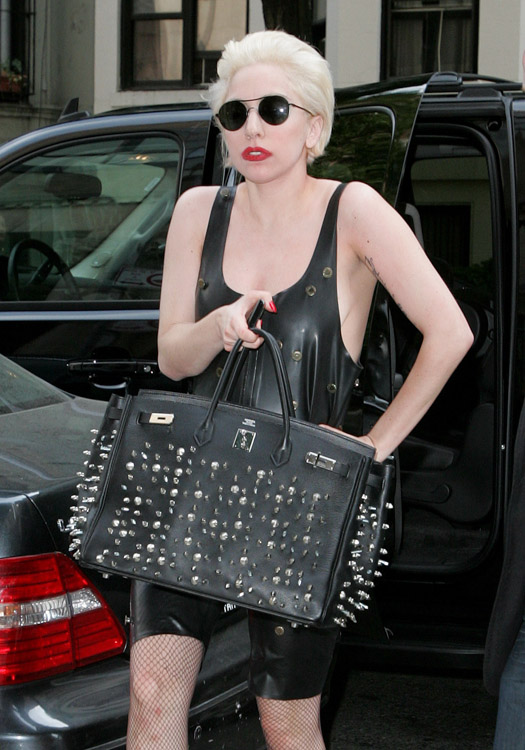 She craves too much attention and her taste is anything but elegant or tasteful.

When and where did she say she was trying to be elegant?

Lady Gaga is so talented too bad she hides behind props.

I too was a fangirl but now, ugh, she bores me. I went to a show of hers and she was trying to go for this highbrow “artiste” performance and it missed every single mark. The concert had some convoluted storyline with elaborate props and weird background scenery that shrunk the stage significantly, so Gaga and her backing dancers looked like they had to be very wary of where they were stepping. She would sing one song and then be gone for 5-8 minutes for a costume change and they would play videos of still photographs of Gaga on the giant screens and everyone would just shrug, and sit back down. It was a rollercoaster of energy highs and lows–a total letdown and so exhausting!

I’ve seen her live twice, the first time being the small show I mentioned up top and the second being a big arena tour like the one you’re describing, and I agree, the arena tour was really disappointing. She started out as a really exciting, magnetic stage performer and turned into a contrived circus freak.

Gaga isn;t the basic pop star you want her to be. She actually has talent and uses it as she pleases. She can actually sing and dance unlike other female artist now a days.

Couldn’t have said it better myself. The “trying too hard” vibe just radiates off her and her attempts at being edgy and nouvou are just plain desperate.

le sigh… not a fan of the GaGa…

I’m not sure about her. Not sure if she’s authentic or just real good at media/fan manipulation. That said, the only song of hers that I love and still listen to is Just Dance, the remix with Colby O’Donis(whatever happened to him, he could actually sing). Anyway, her bags are not as crazy as I would have assumed, covet #’s 4, 10, 13 and 16.

Are you guys serious? Gaga is not a bore, tho i have to admit, the Born This Way ball was a bit much. But she’s very real and very passionate about her work, and that’s one of the many reasons why I love her. You will find no celebrity that loves and cares about her fans as much as Gags does <3

Then again, your profile picture is Miley Cyrus… LOL…

my buddy’s sister makes $87 every hour on the internet
. She has been unemployed for 6 months but last month her payment was $19402
just working on the internet for a few hours. go right here C­a­s­h­f­i­g­.­C­O­M­

Why can’t we all have difference of opinion without stooping to being called a hater?

Typical of these so called ‘monsters’ who will support her blindly, sadly some of these ppl are very insecure and ledge on to her songs as though it was life and death and Gaga is smart enough to capitalize on them. She speaks too often about her struggles which is like what struggle? She’s white, middle class American. Tell me if this is not a ‘marketing ploy’

excuse me? Some of these “monsters” have serious problems and find an escape through her music. Just because she went to a private school doesn’t mean she has a problem. She dealt with self confidence and was being constantly bullied through her teen years. So apparently just because someone is white it means all of their struggles are gone? Nice.

I also preferred her during the earlier stages of her career, back when she wasn’t so outlandish and crazy. However, you can’t deny that voice of hers, she can really belt and it seems to have even gotten better with time. You can tell she tries to be as involved in her artistry as possible. She is certainly one of the more interesting pop artists of our generation

Am a fan and have always been a fan. I see a progression in her work, her style and music.

I like Gaga. Even if it’s not cool these days. 🙂