The Many Bags of Miranda Kerr, Part Two 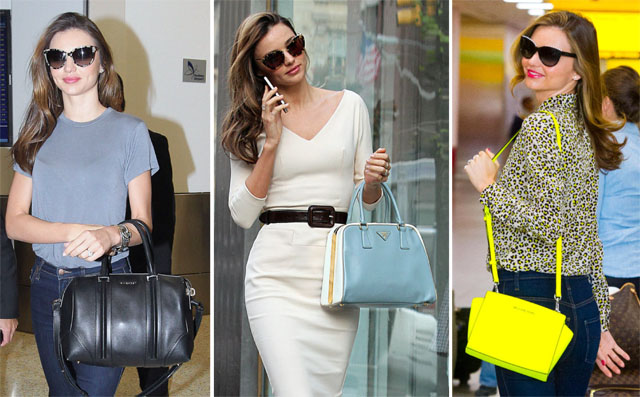 Since we started our The Many Bags of… series over a year ago, we’ve been making periodic mental note of the celebrities that we’d like to revisit for a second round. Some stars have simply been too bag-crazy for too long to do justice to them in one shot, and others, like supermodel and all-around perfect human being Miranda Kerr, have stepped up to the handbag plate so much in the past year that their bag choices in that time period totally eclipse whatever they had going on before that, no matter how good at was. (And in Kerr’s case, it was very good.)

Kerr has always been gorgeous and well-dressed, of course, but since we profiled her last June, she’s almost become super-human. Even when she’s headed to a regular ol’ business meeting and gets snapped by photographers on a grungy sidewalk, the photos often look like they could be from an ad campaign, given some color correction and the addition of a designer logo. She reminds me of a less retro, less rigid Dita Von Teese – a perfectly coiffed aesthetic superhero, always fighting (and winning) the good fight against frizzy hair and bad tailoring. Sending her a handbag must be the easiest decision in the world for a brand’s PR department – she’s going to make it look the best it can possibly look, no matter what. She’s Miranda Kerr. Below, her greatest hits from the past year.

First, it must be said – Miranda still absolutely loves her Givenchy Antigona Bag. We included it in her last “Many Bags,” and she still carries it more than anything else she owns. Get your own through Bergdorf Goodman for $2,405. 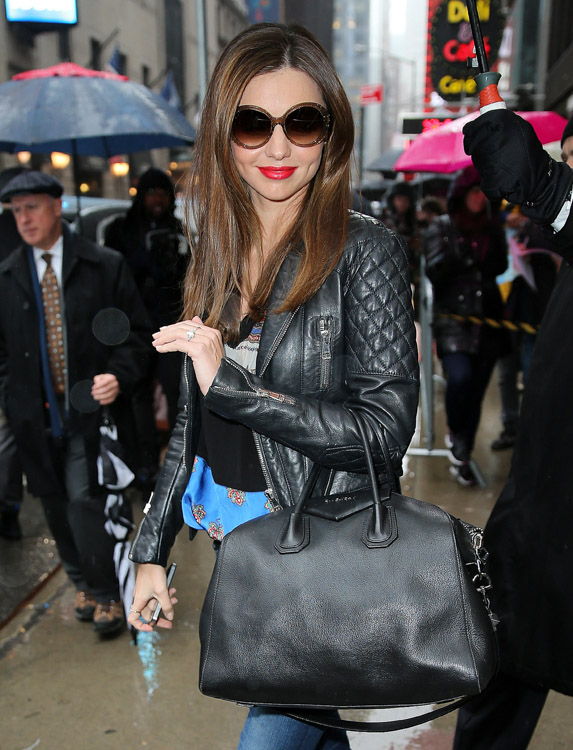 Miranda also likes the newer Givenchy Lucrezia Satchel, but it’s no match for her Antigona. Buy through Barneys for $2,185. 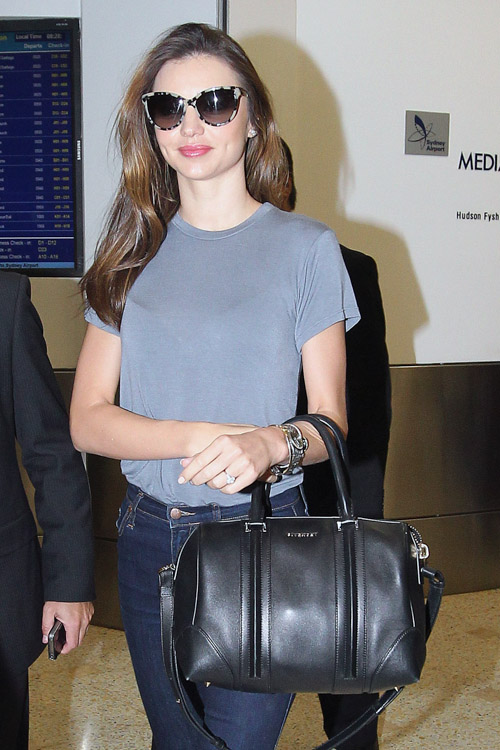 Although she’s been an ardent Celine Cabas Tote fan for quite a while, Miranda was a bit behind the back when it comes to acquiring a Celine Luggage Tote. She still makes it look good. Shop authentic pre-owned Celine via Portero. 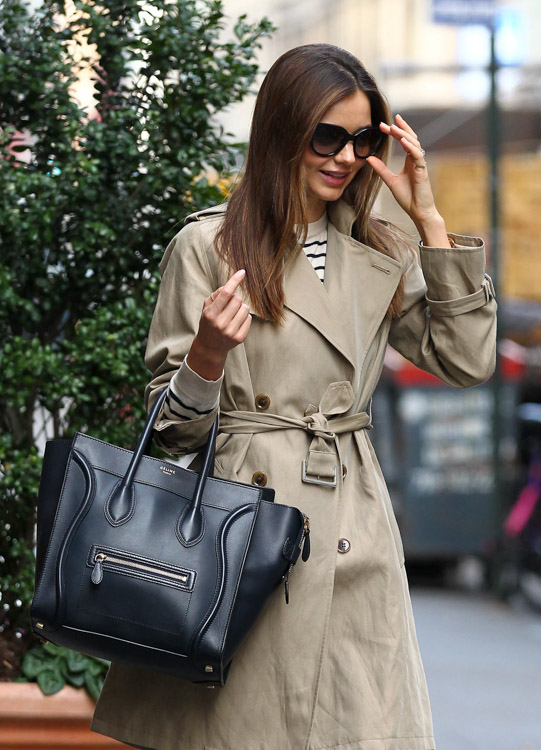 One bag on which Miranda is ahead of the curve? The 3.1 Phillip Lim Ryder Bag. It’s not even out yet and Miranda’s already been carrying hers for a couple months. Pre-order yours now for $895 via Saks. 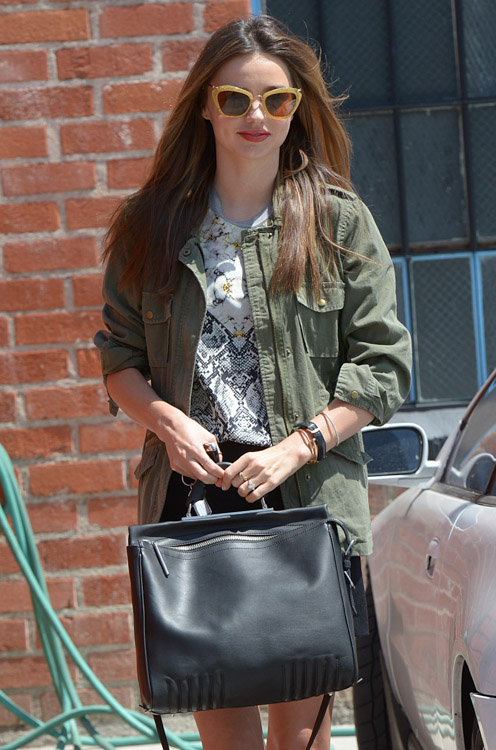 Miranda’s starred on the Prada runway and in the brand’s print ads, so it’s no surprise that she often carries and wears Prada and Miu Miu. I’m still jonesing after this Prada Flowers Tote from a couple seasons ago. Shop Prada via Neiman Marcus. 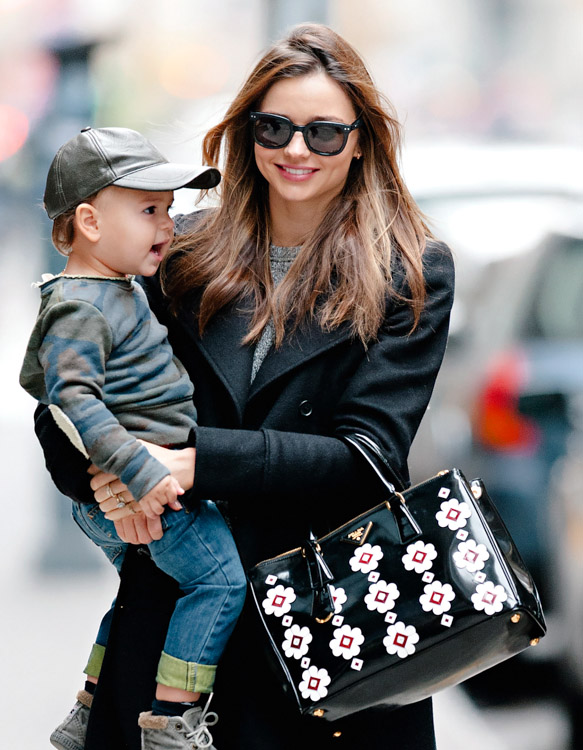 I promise you that this isn’t a Prada ad, it’s just Miranda carrying a Prada Pyramid Frame Bag, walking down the sidewalk. Pick up the black version for $3,150 via Neiman Marcus. 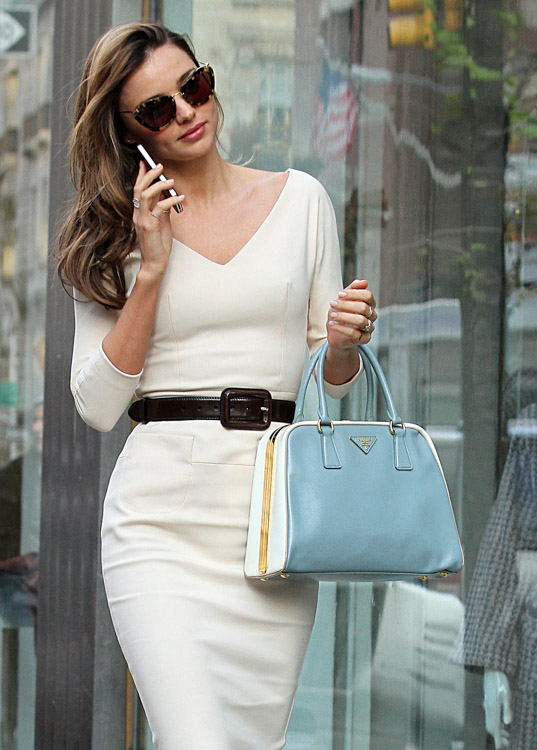 Another photo that I would totally buy as a paparazzi-themed Prada ad, given a bit of color correction: Miranda and her Prada Saffiano Promenade Bag. Pick up the bicolor version for $1,950 via Neiman Marcus. 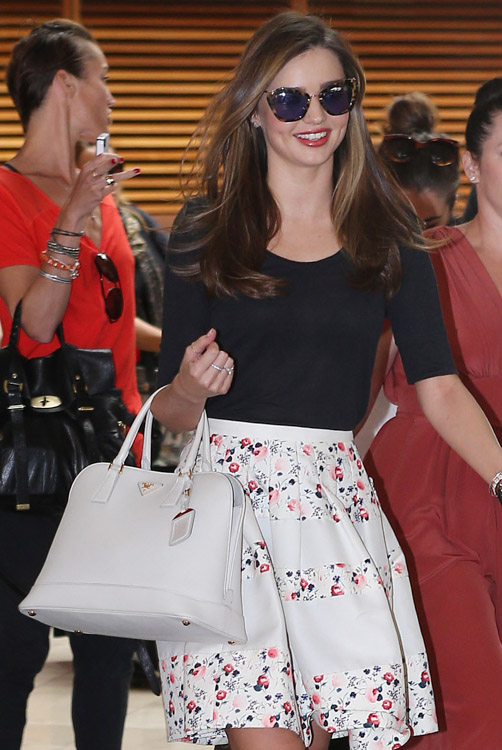 This photo? Also not a Miu Miu ad, but it it might as well be, with Miranda and her Miu Miu Madras Top Handle Bag. (If memory serves, those are also Miu Miu sunglasses.) Get the bicolor version for $1,520 via Miu Miu. 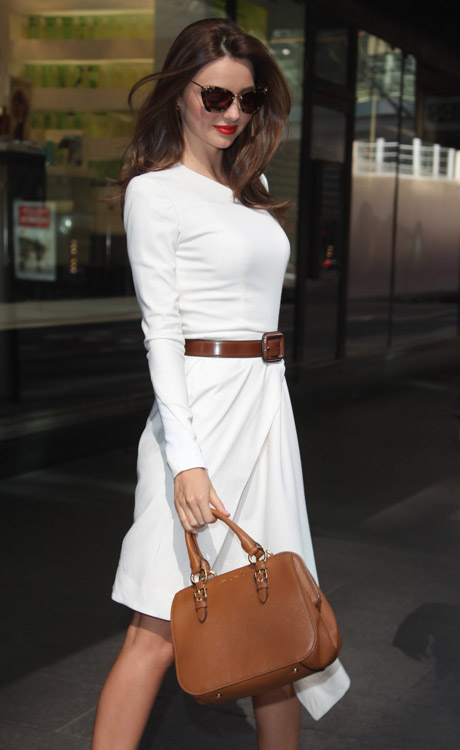 After all this, you might be wondering why someone doesn’t just go ahead and pay Miranda to be a brand’s handbag spokesperson. Well, someone does! Samantha Thavasa, to be exact, which is popular in Asia. Here’s Miranda with one of the brand’s bags, the Samantha Thavasa Sweet Noa Bag, arriving at the airport in South Korea. Buy through Samantha Thavasa for $295. 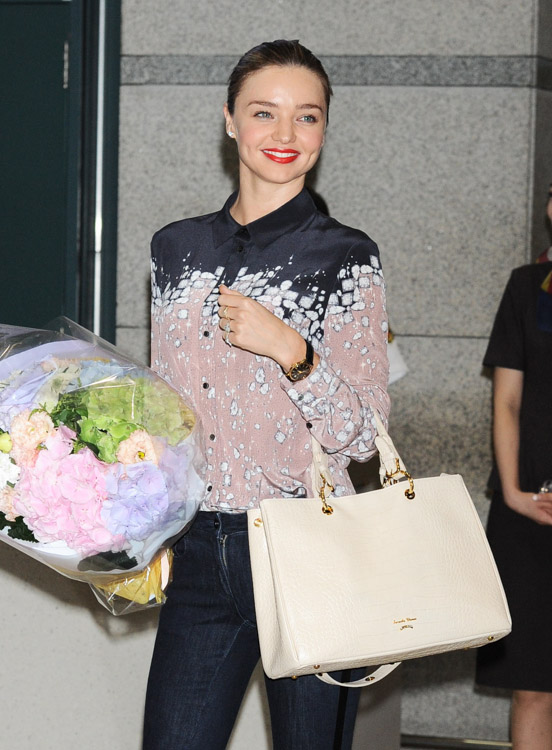 Miranda even designed a line for the brand – here she is with the Samantha Thavasa Lock Satchel, also on a jaunt to Asia. (With more Miu Miu sunglasses, for those keeping track.) Shop via Samantha Thavasa. 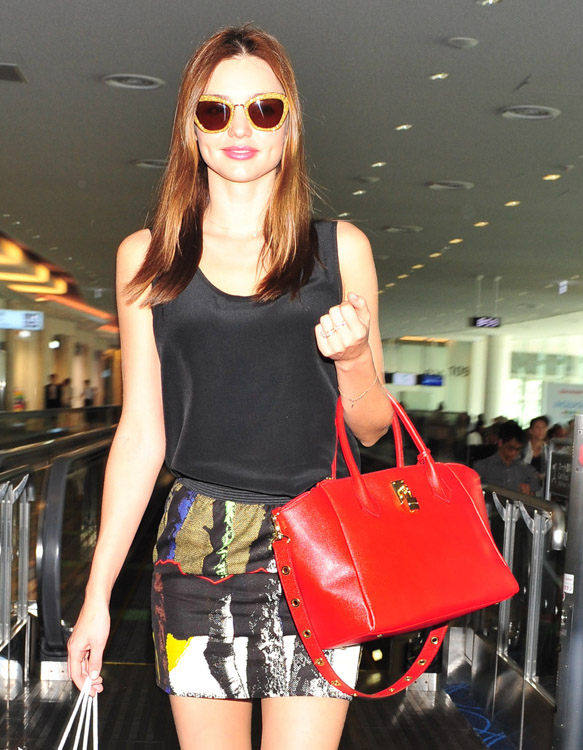 Miranda spends a lot of time in airports, which is a great place to spot her bags because of how necessary they are during travel. Here, she went petite with this neon yellow MICHAEL Michael Kors Selma Messenger Bag. Grab the black version for $228 via Nordstrom. 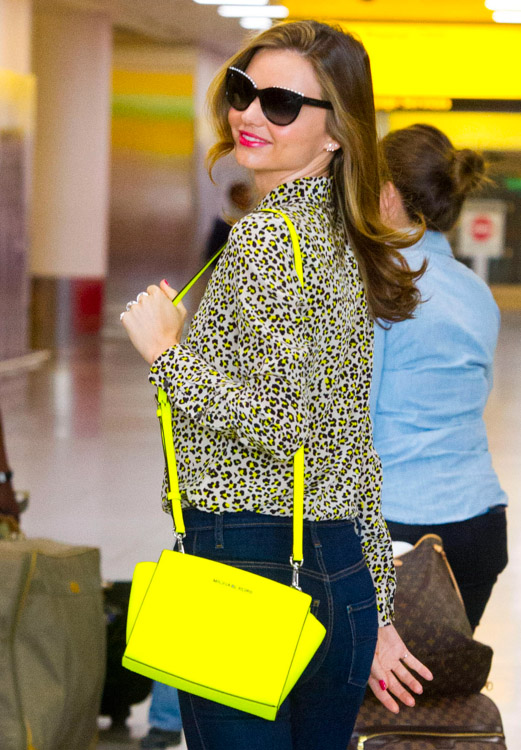 Another airport look! This time, Miranda chose the Viktor and Rolf Bombette Bag. That name might be a little spicy for the airport, no? We can’t find this bag anywhere online – eek! 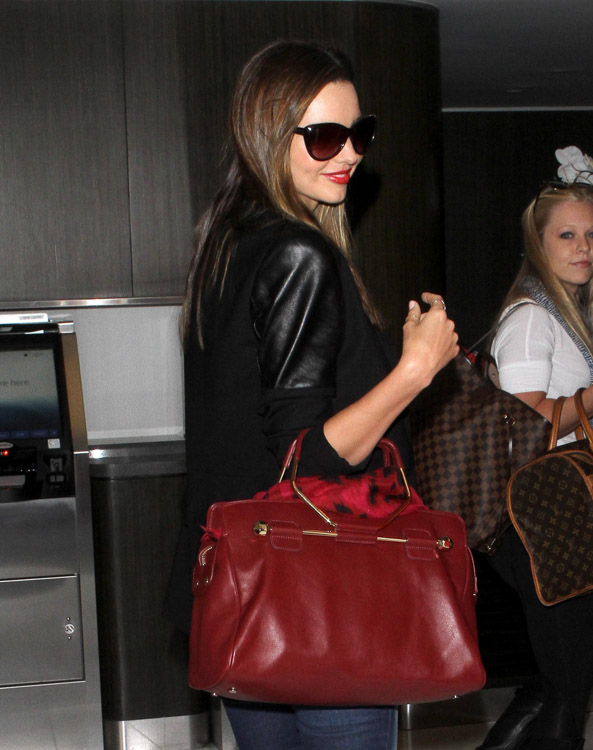 Mostly, though, the paparazzi simply spots Miranda wandering around New York or LA, looking totally chic. Even on mommy duty! Here she is with kiddo Finn and the Isabella Fiore Roxana Flap Bag. Shop Isabella Fiore via Bloomingdale’s. 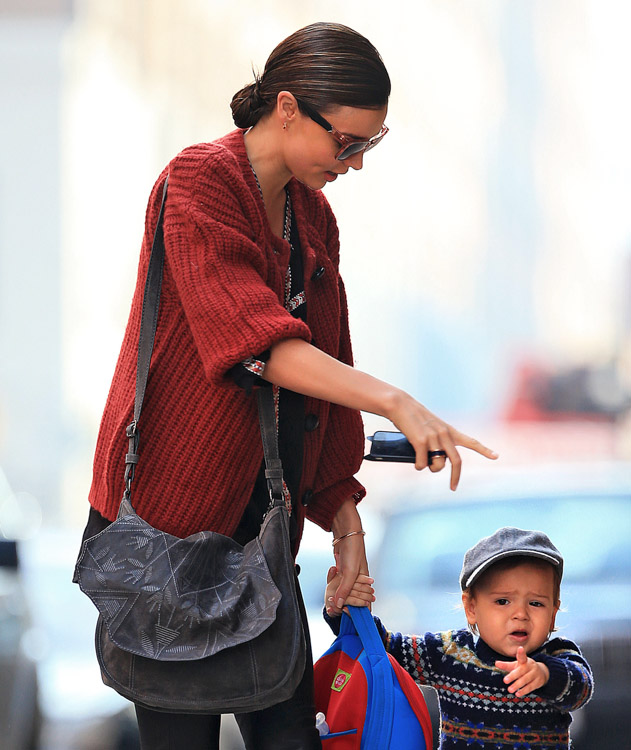 Miranda’s so magical that she can even make me kinda like the Burberry Barrel Suede Satchel. Shop Burberry via Neiman Marcus. 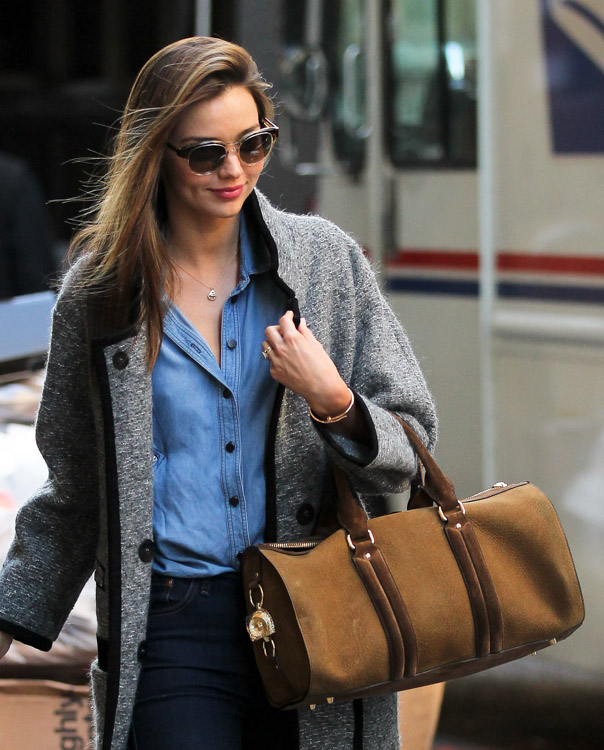 She’s so baby-faced! Look how young Miranda looks with this Alexander Wang Prisma Tote. It’s on sale for $689 via Barneys! 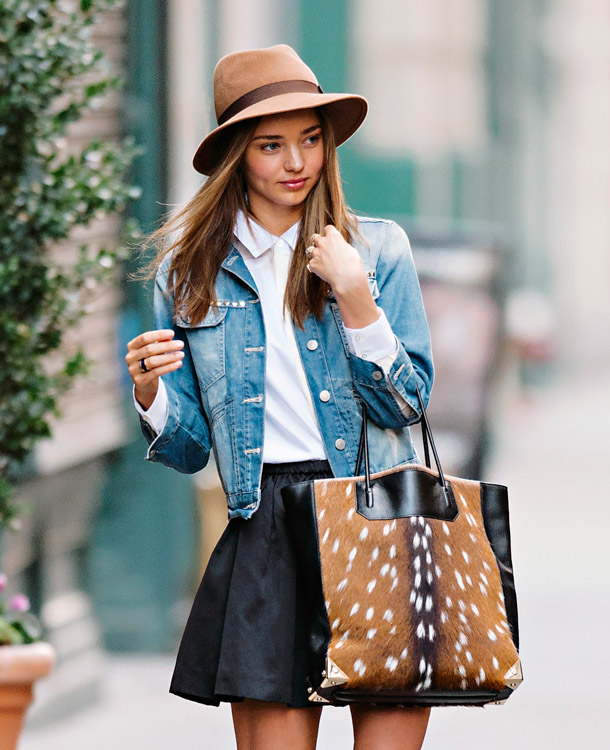 It would take a lot to distract me from the Balmain x Aurelie Bidermann Pierre Bag, but that widdle bitty puppy belly is plenty. 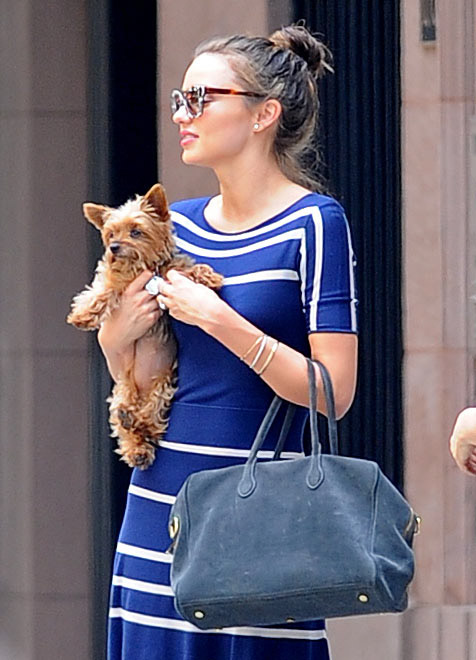 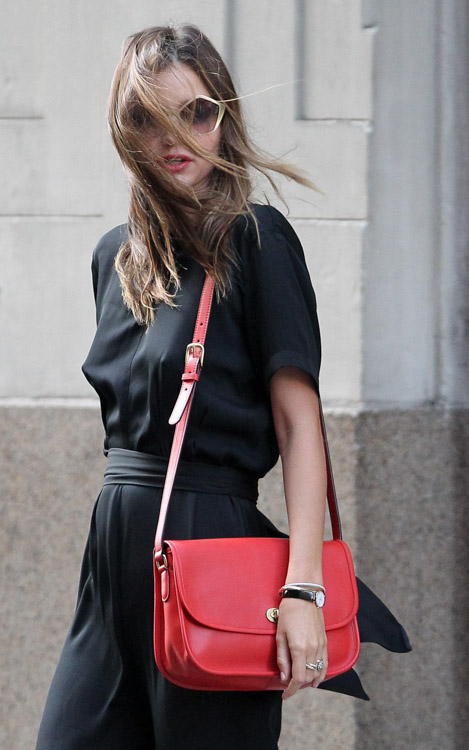 Miranda doesn’t carry Valentino all that often, but her Valentino Grande Lock Bag is gorgeous. $,2095 via Neiman Marcus. 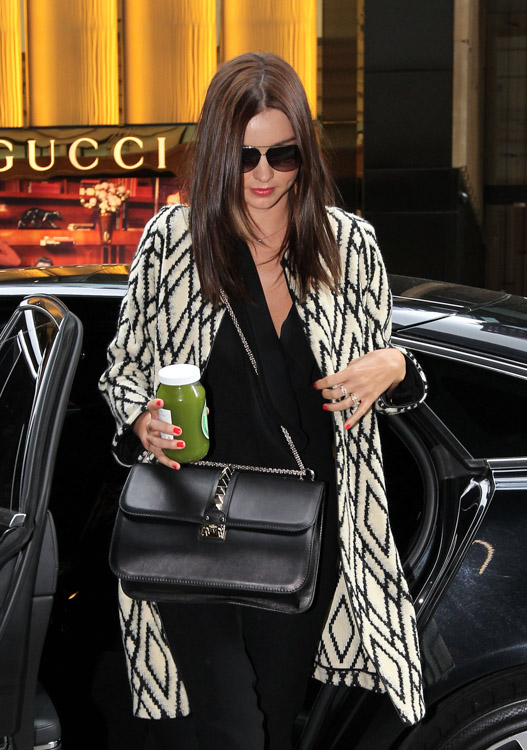 The green of Miranda’s top and her Christian Louboutin Farida Shoulder Bag really bring out her eyes. Pick up the colorblocked version for $1,595 via Saks. 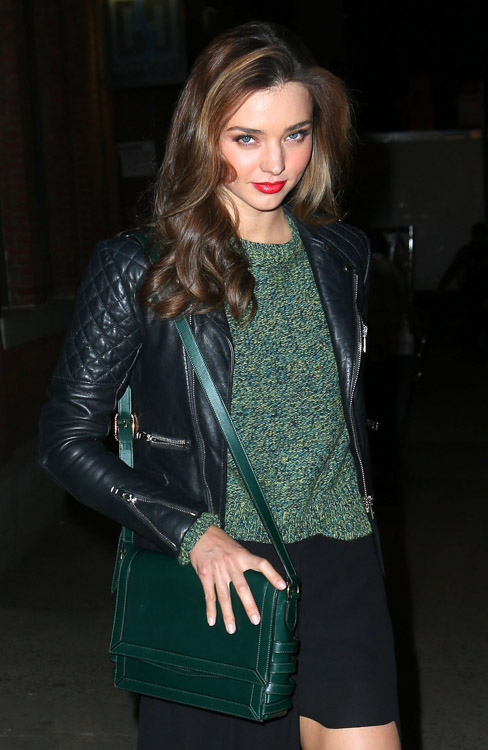 A little eye candy for all of us: not only is Miranda’s Marni Mini Leather Shoulder Bag beautiful, but so is hubby Orlando Bloom. Pick up a yellow version for $1,595 via Saks. 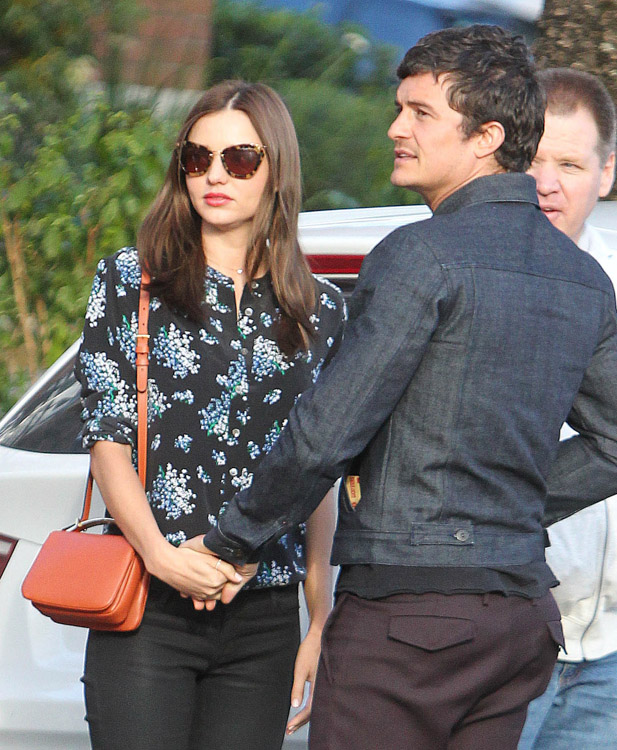 Ahh, the red carpet. Miranda gets invited to tons of events, often on the arm of a designer. Can you blame anyone for wanting her to wear their work? Here she is at the 2013 Met Ball, wearing Michael Kors and carrying a Christian Louboutin Marquise Spiked Clutch. $1,295 via Saks. 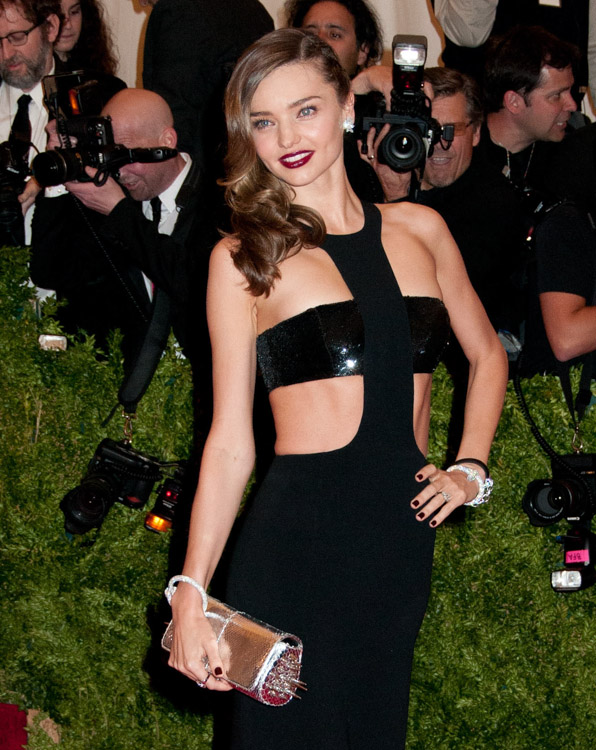 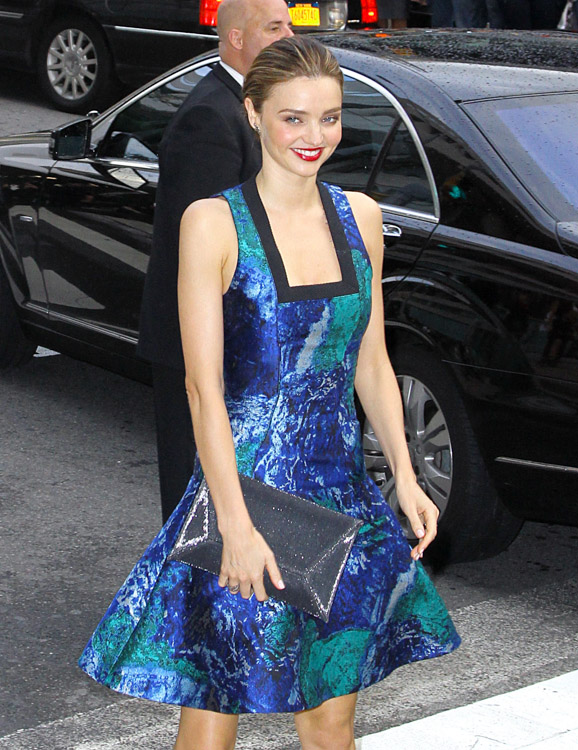 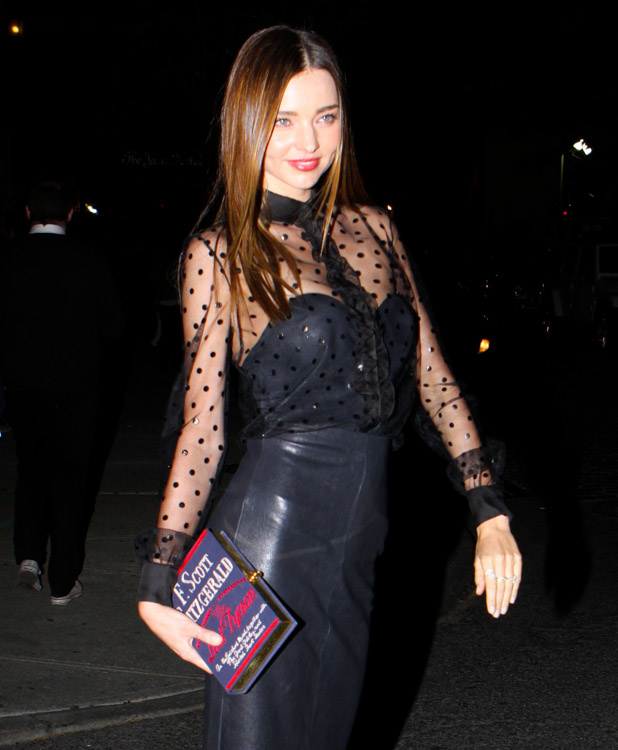 She’s cute as a button, but overrated like her husband. The only bags on that list that I covet are the Viktor and Rolf, and the Burberry satchel. Love how she makes sure each bag is prominently photographed, lol,

so i’m guessing you like miranda kerr? just a vague impression i may have gotten

Ugg. I think I will stay inside in my pajamas today.

Demi Lovato had that givenchy bag (the first one)

It is amazing to think about all the work you’d have to put into moving stuff from one purse to another when you change bags so frequently.