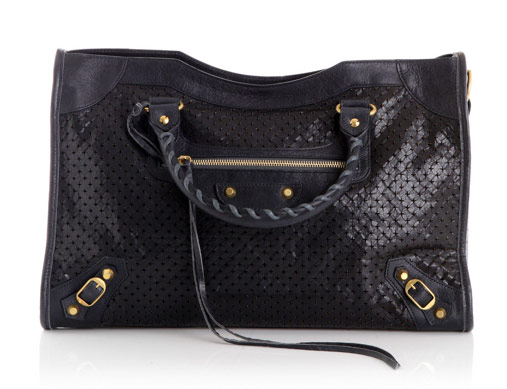 UPDATE: Despite the name, this bag is not actually studded. MatchesFashion.com calls it that for reasons that are not entirely clear, since it has no more studs than any other Balenciaga bag, and they don’t refer to the rest of their Balenciaga inventory that way. My eyes did not deceive me the first time – it’s perforated, which actually makes me like it even less. Feel free to read the rest of this post if you enjoy reading about handbags that don’t actually exist. Although this mix-up brings about an interesting question: Have you ever bought a bag online and then felt like the bag’s photos and description weren’t as accurate as they could have been when you finally received it?

When I first saw the Balenciaga Gold Studded City Bag, my automatic reaction was surprise, mostly at the fact that an all-over studded Balenciaga hadn’t been released before. But as I looked at the design, my surprise changed, and now I’m mostly confused that a company that normally uses punk influences in a sophisticated way didn’t manage to make a much better studded bag.

Regardless of the fact that this bag should have come out a year ago, perhaps it would have been wise to keep it under wraps in total. Balenciaga’s giant gold hardware is a cult favorite but has never been overwhelmingly popular, and this diminutive version probably won’t gain much traction either. It’s a nice change, but it’s not interesting enough to really stand out to Balenciaga fans that are used to new colors, hardwares and shapes four times a year.

I appreciate that the small size means that the leather will still be able to sag and move like a regular Balenciaga City bag, and a little texture never hurt anyone, but this bag just isn’t the best that Balenciaga could have done. Perhaps I’d feel more inspired if the studs (and the hardware) were silver, but even then, Balenciaga is my favorite brand and I tend to hold them to an almost impossibly high standard. Buy through Matches UK for $1582.

I like it but the quality issue just stops me.

I saw this bag in person at Barneys and it’s very nice!!!!

I zoomed in all the way on the Matches website and I’m still convinced it’s perforated.

I love the bag. Not that the issues brought up in the article aren’t important cos they are. But I love this Balenciaga better than the others because it seems lighter.

I’ve seen this bag at Neiman Marcus. It’s perforated, there are no studs.

Yep, Megs and I did some more looking after the post went up and we edited the intro to reflect that!

I actually like this bag a lot! Minus the fiasco over the name, I love it, actually. Was it, perhaps, a translation error (a big one, it must be said)?… And, to be completely honest, I saw the picture first before I read the title, and I immediately thought it was perforated.

I love, love, love the gold against the black. I am seriously considering this. Uh-oh…

Very interesting Balenciaga’s…I really like it but for the summer season…But it’s beautiful the youth taste that belongs to it!!

Huh, this is quite interesting for Balenciaga. The texture is nice, and the hardward too, but it lacks something of the classic Balenciaga.

I also saw this Balenciaga bag at Neiman Marcus. At first, I wasn’t sure about the perforations, but it grew on me. They had one in black and one in a navy blue. The blue one looks better!

Balenciaga should come out with another studded bag. As for the perforated leather, I actually like it in navy.