Balenciaga adds snakeskin to its repertoire 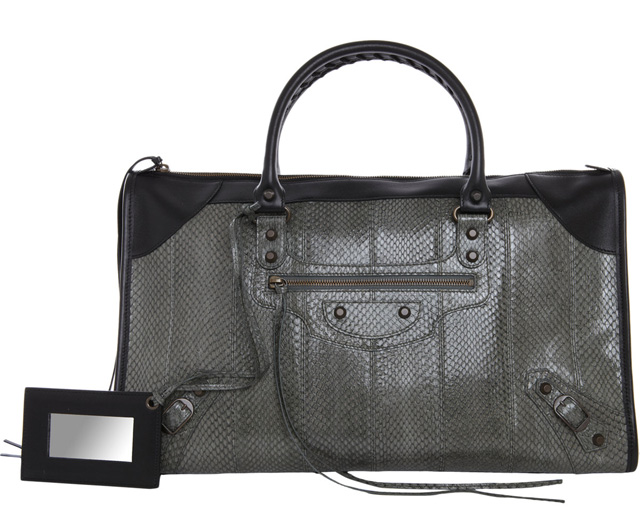 Until I saw the Balenciaga Serpent Arena Classic Work Bag, it had never occurred to me that I hadn’t ever seen a snakeskin Bal Motorcycle bag. After all, the design has been around in one incarnation or another for over a decade, and we’ve seen it in everything from straw to crocodile – surely there had been at least a python version, right? Well, according to my research, only the Papier bags have come in snakeskin, none of the classic Motorcycle styles. In light of that, it seems like it’s about time that Balenciaga got a little serpentine.

Snakeskin isn’t as thick or rigid as exotics like crocodile and alligator tend to be, so it automatically lends itself well to the slouchy, soft structure of the Motorcycle bags. Instead of python, this design uses narrow panels of elaphe snakeskin, which isn’t considered as luxurious as python but does offer rows of small, neat, uniform scales that have charms unto themselves. The bag is trimmed in standard Moto black leather, and the black-on-grey combination seems particularly appropriate from new creative director Alexander Wang. This collection wasn’t designed under his oversight, of course, but Balenciaga fans can likely expect to see more bags like this one in the future, if Wang’s past work for his own brand is any indication. Buy through Barneys for $3,350.

Which color of the Balenciaga City bag do recommend as a first time (and perhaps only time) Balenciaga bag? I’m trying to decide between Parme, Latte, or black.

my first balenciaga is sky blue color, and second one is grey color with gold giant.

Stylish, classic and very sexy. I loved it!!

Recently I was really, really low on cash and debts were eating me from all sides! That was UNTIL I decided to make money.. on the internet! I went to surveymoneymaker dot net, and started filling in surveys for cash, and surely I’ve been far more able to pay my bills! I’m so glad, I did this!!! With all the financial stress these years, I really hope all of you will give it a chance. – kvqh