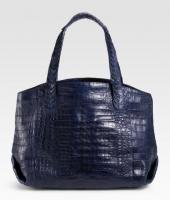 It’s been a while since I’ve had the pleasure of writing about a Nancy Gonzalez handbag, and I think I’ve figured out why: I can never tell when they’re new. I don’t mean to say that they all look alike, but…a lot of them look alike. Although I guess if a design isn’t broken, you don’t fix it.

The Nancy Gonzalez Navy Croc Tote surely isn’t broken. In fact, it looks like a completely functional yet totally elegant answer to most women’s need for an everyday bag. Plus, because it’s Nancy Gonzalez, it’s also and exotic at a relatively reasonable price. 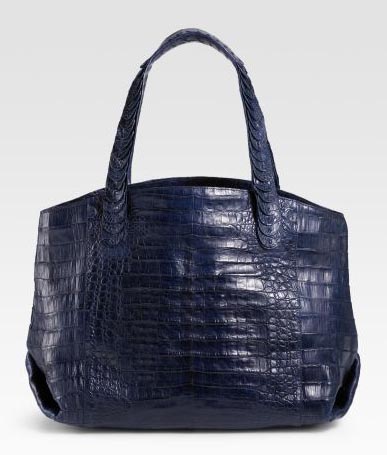 There’s not a terrible lot to say about Nancy Gonzalez’s croc bags that I haven’t said before, so I’ll try not to repeat myself too much. What’s always struck me the most about them, though, is that they seem a good deal less fragile than your average ultra exotic croc bag. In fact, they seem downright tough at times, which probably allows Gonzalez to use less expensive crocodile hides than brand like Hermes, which uses only the most fragile, spotless skins. She passes at least some of the savings on to her customers – Gonzalez makes some of the most reasonably priced croc bags on the market. Buy through Saks for $3300.