This rose gold Hermes Kelly will set you back $2 million 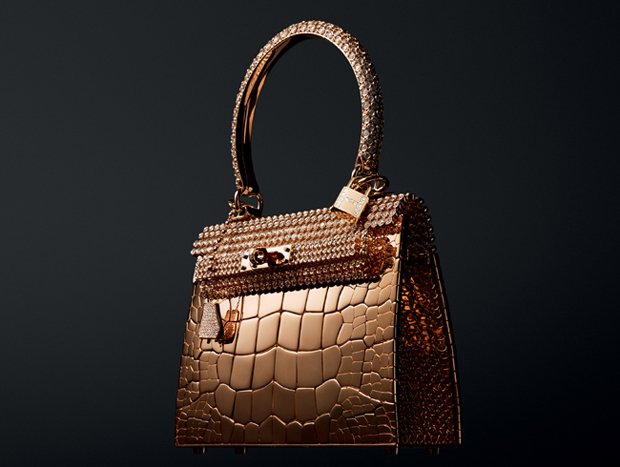 Ok, so here’s the skinny: Designed by Hermes in collaboration with jeweler and shoe designer Pierre Hardy, this Hermes Kelly is made out of solid rose gold dotted with a total of 1160 diamonds. The bag (bag-bracelet?) can be carried conventionally or worn with the handles around the wrist as a sort of bangle. After a few minutes of imagining, I guess I can see how the body of the “bag” might hang from the wrist without looking too awkward.

This isn’t just a piece of jewelry, though. Hardy molded the rose gold to look like crocodile leather, and the flap closure actually works, although the bag is too small to hold even a pair of sunglasses. Total manufacturing time on the pieces (yes, there are four styles that will be made three times each, for a total of 12 bags, according to the Financial Times) was two years.

Let that sink in for a second and then join me after the jump.

The natural response to the news that Hermes plans to make $24 million on a dozen tiny bags is probably to look out the window and make sure that the apocalypse isn’t upon us, and as far as I can tell, it’s not. (But, you know, maybe buy some bottled water just in case.) It wasn’t too long ago that people were choking on the idea of a $200,000 Hermes bag, that one also dotted with diamonds.

On further reflection, however, this is probably a genius move based on what we know about Hermes’ dedicated and wealthy customer base. On our Forum, I’ve seen collection photos from women who have what seems like dozens of crocodile Birkins and Kellys; those women likely also patronize extremely high-end jewelers as well, and it doesn’t seem outside the realm of possibility that 12 of them would have both the excessive means and the collector’s compulsion to snatch up one of these bag-bracelets. If only so that they can display it in their surely vast closets. After all, being stinkin’ rich makes most people kind of crazy.

Hermes is a brand that monitors its own public image very, very carefully, so the two years lead time and considerable resources that went into making these bags were obviously pored over in every detail. The end result fits with the brand identity very well: extravagant wealth, fantastical luxury, the best of everything, a strong sense of the house’s history. Don’t be surprised if these pieces sell out quickly and more projects like this one come forth in the future. After all, Hermes is one of the only brands in the world that has the kind of devoted, wealthy customer base that can make a would-be publicity gimmick into a sellable piece of company history.

This is for the person that has more money than sense.  I love nice things but this is beyond ridiculous.

Hermes bag, give you have been very luxurious feeling, very beautiful and very classic.

OMG..for that price, I would like to sport it over my shoulder, rather than my wrist. It’s beautiful, I love the color and design.

It’s a beautiful bag to look at but I wouldn’t buy it. There is no reason to go around showing a bag like this. No sense.

Oh. My. God. We all knew they charged too much for their bags, but making these just takes the cake. Wouldn’t it be heavy? It would be weird to carry even if I did have 2 mill lying around for that fine bag/fine jewelry crossover we’ve all been waiting for . . . oh wait.

Well, it certainly is a beautiful art piece…but not exactly for the practical everyday kinda gal. However, I’m sure some mega-rich type is placing an order for it as we speak. Because let’s face it, you need to be living a lifestyle that includes body guards in order to feel safe carrying. So, I don’t expect I’ll see anyone sporting it on the Lexington Avenue subway any time soon.

well they finally gave us rose gold ……….  i think that…. as always its a flawless object…. as a display piece. for me jewel bags are not something i go for. i feel its is an hermes judith leiber . having said that its brilliant as Vuitton creates its …..Haute Maroquinerie department. and Moynat resurfaces making beautiful rich leather bags. Hermes pulls us back and reminds us that they are the all time luxury and class act !

Really?  Everyone is posting like this bag has a scintilla of sanity associated with it.  It’s ridiculous!

Can this be worn around the neck? LOL