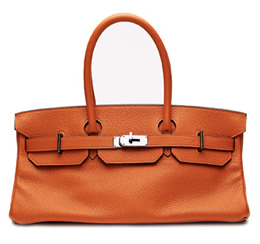 Hermes’ new designer Jean Paul Gaultier on the helm has redesigned the infamous ‘Birkin’ bag for spring/summer ’05. This is no small innovation, given that the original is in such demand that there is a wait to get on the waiting list. But JPG’s changes work — now you can actually get the bag over your shoulder.

Due to its shortened height, the bag seems as long as an eighteen wheeler semi! Like Luella with her Baby Gisele, the logic step to an already successful handbag was to adding a shoulder design and appeal to a wider audience. Among the large variety of carry-alls that we’ve seen, this new shoulder Birkin sure is in contention for the throne. So damned appealing!
As shown on the right in the new “pumpkin orange” shade, the bag will go for Â£4,000 (~$7,500). Stores around the globe hesitated with the large orders for the bag, unsure about how the new low profile would appeal to the customer base. In addition, a limited production is running on these treasures as well. Hence, the new Hermes Shoulder Birkins are even more scarce than the legendary regular Birkins.

However, since Jean Paul’s line had been intro’ed last fall, US sales for Hermes went through the roof. Coincidence? Me thinks not.

thats a lot of money for that bag 🙁

Hermes is my favorite purse & scarf supplier. And this bag lives up to that.

Anyone who would spend this much money on a bag is insane unless the free gift with it is a new car!

I have one of the JPG in black and I absolutely love it! It is so durable and it is also big enough to hold all of my stuff. I have been told that they are a limited edition though so, if you want one get one quick!!!!

I have got red JPG 42cm from store.bagluxury.com

it is fabulous, and I love it

Is store.bagluxury.com legitimate or do they sell fakes?

I purchased two birkins from luxury.com one is a black 40cm they other 35cm blue jean they are exact beautifal replicas

0
Reply
Clare
Reply to  kelly A

How do you know if it is real or not? I want to get a birkin bag for my mom, but the US stores dont even take wait lists. Any suggestions?

i have access to runway pieces of hermes handbags. let me know if you are interested and i’ll send you what I have. how much do you wnat to spend?

Hi, do you have an excess to JPG? I would love to get one. Also, I am looking for a 35cm Blue jeans in Togo/Clemance.Anything on hand?

Hello! I have a 35cm baby blue birkin bag that I am willing to part with. It’s only been used once. I recieved this purse as a gift. It’s gorgeous, don’t get me wrong, but just to big for me. I like my tiny Dooney and Bourke’s!! 😀 If you are interested in this purse you can email me at shorty21av@yahoo.com. I have lots of pictures!

I love Hermes Bag and since birkin bag is one of the in demand bag I always find it a habit to check out hermes-bag.com for any latest news.

I love it. It’s very chic. I am positive that JPG will do wonders with injecting new life into a brand that aside from fabulous quality, was beginning to become marmish. I am the proud owner of some of their bags – almost ten. It’s a wonder how I keep afloat financially(I only eat instant noodles!)Two of them are Birkins and one of them is the Haut a Couroirres. They all give me much pleasure. Long live Hermes and the suckers like me who pay for it.