JW Anderson’s Bumper Bag Has a Growing List of Fans

JW Anderson first rose to popularity for his menswear designs until he eventually expanded into women’s RTW. Then, in 2013 LVMH purchased a stake in the company while simultaneously appointing JW Anderson as creative director at LOEWE. Thanks to the backing of a powerhouse parent company, the brand continued to grow and began experimenting with accessories as well.

As the designer’s offerings expanded, so did his popularity, with his bags popping up on the arms of some of the industry’s most fashionable people. His aesthetic was part modern, part sporty, with British-inspired details that were an ode to his London-based headquarters. Wearable yet unique, the designer became known for his logo bags and the ever-popular Piece bag, ironically resembling a nose piercing.

These days, JW Anderson continues to expand his offerings while simultaneously acting as creative director for LOEWE. In the last few seasons, the designer has introduced a few cult-favorite bags. Most noticeably, there’s the Chain Hobo and the the Twister bag, which is reimagined this spring in bright, bold colors that are perfectly on-trend. What’s particularly enticing about JW Anderson, is that its bags are on the more affordable side of luxury fashion. Not to mention, it remains one of those understated brands, one that’s recognizable by some but not all. 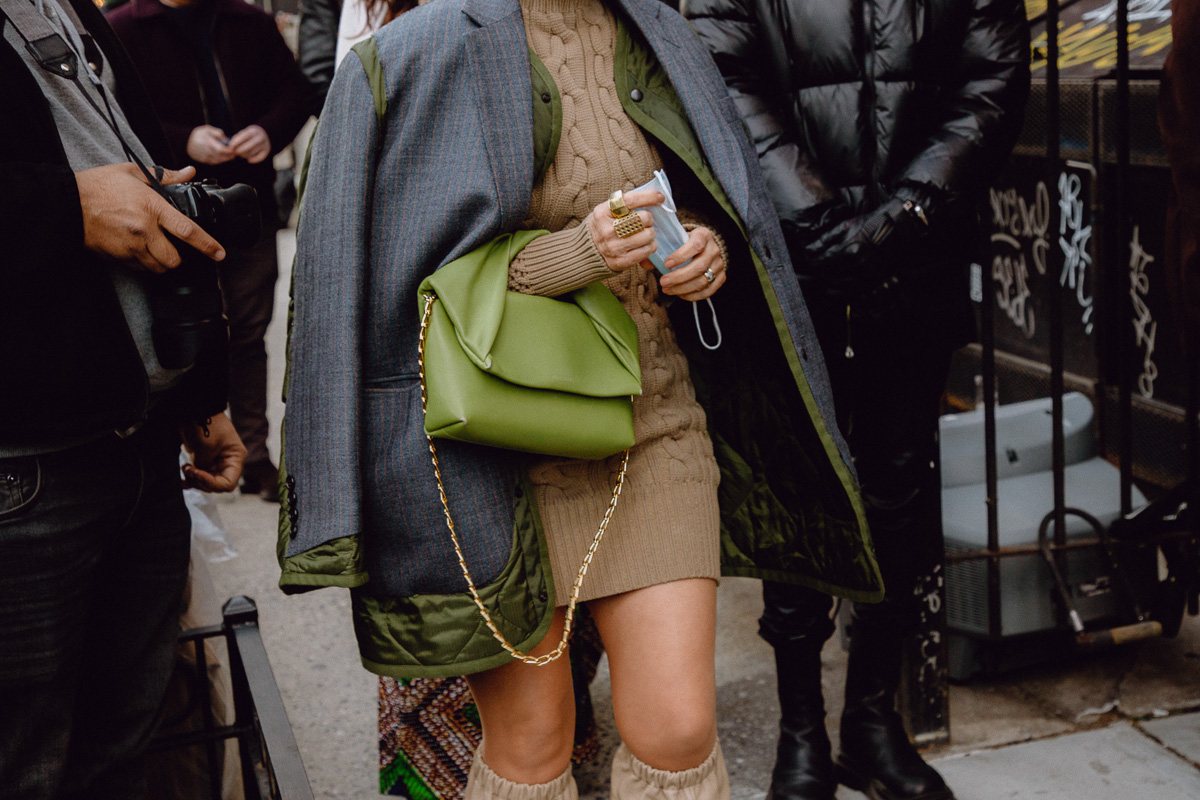 Lately, a new bag from the London-based brand is making waves, quickly amassing a list of celebrity fans like Charlie XCX and Dua Lipa, and we’re simply obsessed too. Introduced for Spring/Summer 2022, the Bumper Bag comes in two shapes, a Baguette ($790) and a Half-Moon Hobo ($650). Both are relatively practical in size—large enough to fit your phone and more.

Maybe it’s the soft pillowy Nappa leather or the fun color options (I’m obsessed with the tan/purple), but this is the bag we’re sure is going to be everywhere this spring and summer. If you prefer a more minimalist look, the Bumper bag also comes in neutrals like black and white.

I’m stunned at the ugliness of this bag. Stunned.

I like it. I bought the Coach Pillow Tabby last week, and this looks just as soft and cushion-y. I love the pink and blue.

Looks like a baby Pokémon, maybe related to JigglyPuff

The pink and blue bumper bag is something my 6 y.o. granddaughter would love, but a grown woman? Idk?

It’s a fun bag at a reasonable price point.

It looks like a really fun bag to have!

It was hate at first sight.