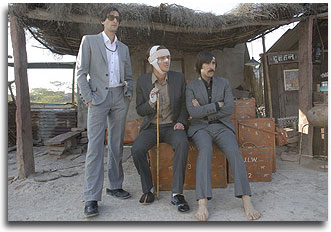 Three American brothers who have not spoken to each other in a year set off on a train voyage across India with a plan to find themselves and bond with each other — to become brothers again like they used to be. Their “spiritual quest”, however, veers rapidly off-course (due to events involving over-the-counter pain killers, Indian cough syrup, and pepper spray), and they eventually find themselves stranded alone in the middle of the desert with eleven suitcases a printer, and a laminating machine. At this moment, a new, unplanned journey suddenly begins.

There are some special guest stars in The Darjeeling Limited. Eleven of them, in fact. An entire monogrammed luggage set, designed by Marc Jacobs for Louis Vuitton.

(Well, there are actually fifteen guest stars, if you count the suits worn by all three main characters and Owen Wilson’s belt that matches the luggage set, all designed by Marc Jacobs for Louis Vuitton.)

The luggage set is a beautiful brown calf skin with prints of elephants, zebras, giraffes and palm trees. I personally could have done without the animals or palm trees, but they fit the characters and the movie.

While I thought the movie was very good, I found myself staring at the set throughout the movie. During certain scenes, I found myself wanting to shriek at the screen, but settled for quietly exclaiming, “Careful! Those are Louis Vuitton suitcases!”

I give The Darjeeling Limited (and the luggage set) Two thumbs up. Images via Elle.

Well, some of you LV lovers might think I’m demented but I actually don’t like any of the LV handbags (for accessories I might make an exception). However, this luggage set is so remote from their traditional (and soooo knocked off) styles that I can’t but like it — a lot. Fun and young, reminds me of someone going on 19th century safari. 😛

i agree, it does look fun and so suited for the movie. Although the suitcase looks quite manly for my taste

This design looks appropriate for the hard sided luggage but not the soft.

I’m actually confused on how Marc actually “designed” any of these pieces, when the shapes are all standard LV luggage designs and the actual print was designed by someone else (it stated this in the credits of the movie). I personally didn’t like the movie, and I didn’t find the luggage to be anything special. Now, Natalie Portman’s outfit in the opening scene – that was spectacular.

JLW is their father. The luggage set was his.

are these actually for sale? i thought it looked rather cool, esp the stenciled text and numbers

would these be in shops??

JLW was the father’s initials in the movie.

And yes, they are actually for sale – put only the original pieces that actually appeared in the movie are being sold, as they were the only ones produced. I know that in late September the pieces were on display at the LV store in New York (not sure if they’re still there), and that you could place a silent bid for the entire collection at that location. The proceeds benefit UNICEF, and I’m sure the final ticket price for the pieces will be astronomical.

The animal designs are by the director’s brother, Eric Anderson. The auction in September also benefited the foundation in India where the movie was filmed. 😉

I LOVE THEM!!! Did’n know they where LV.. But still! Bet they are expensive!! Damn, would really love to have them!!
<33

Personally, I love the luggage in the film. I’m tired (read: bored) of the traditional Louie stuff, and the name-logo prints are embarassing.

I like this luggage for the same reason I love my ferragamo ties – because they’re interesting, different, and a bit of a playful ‘wink’ to the world. Now, if only I can find a company that actually makes luggage like this.