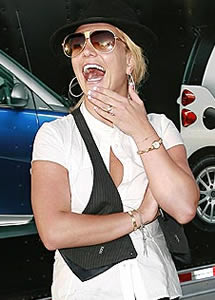 Britney Spears simply can not catch a break. After a horribly custody battle, and in the midst of a divorce, the pop-tart had an attempted come back. Yet her performance on MTV was horrid and now Louis Vuitton won their lawsuit against the Britney Spears music video that violated counterfeiting laws by showcasing a pink Vuitton-upholstered dashboard. The video has been pulled off the air (and off the internet) for now.

A Paris civil court ordered Sony BMG and MTV Online to stop broadcasting or marketing the video for “Do Something” in any form and fined them 80,000 euros ($117,000) apiece, a spokeswoman for Paris-based Louis Vuitton said Monday. The ruling was handed down last week.

In the opening scenes of the video, Spears appears in the driver’s seat of a hot pink Hummer floating on make-believe clouds. One shot shows fingers drumming on a dashboard covered with what looks like Vuitton’s “Cherry Blossoms” design: dark pink blossoms on a pale pink, weblike background, embossed with the “LV” logo.

The court did not find Spears herself guilty but ruled that Sony BMG and MTV Online were guilty of violating counterfeiting laws. The ruling said the video constituted an “attack” on Louis Vuitton’s brands and its luxury image, the spokeswoman said.

It was not immediately clear how the ban would be enforced, or whether the companies would appeal.