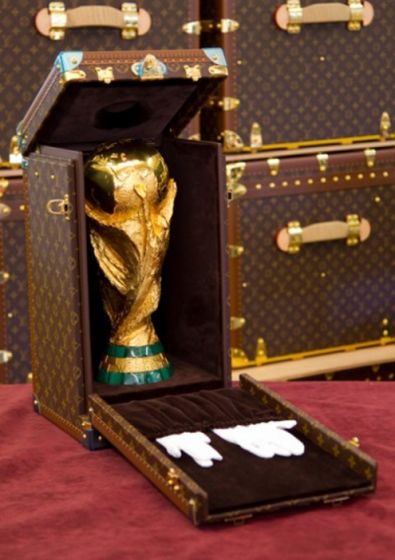 As most of you already know, Spain won the World Cup title in overtime against Netherlands yesterday in front of a crowd of 88,000 in Johannesburg, South Africa. It marks the country’s first World Cup final win in the history of the tournament, and surely the players couldn’t be more proud to take the trophy back to Spain.

They won’t be taking just the trophy, however. This year, Louis Vuitton designed a special carrying case (complete with a spot for white gloves, natch) to display the trophy and move it around South Africa. Right, because Louis Vuitton monogram is so discreet. One day, I’d like to win something so cool that it requires its own custom Vuitton case.

Im from Barcelona, Spain!! Football and the world cup are a very big deal here and winning the tournament has made the spanish society forget (at least for a while) these difficult economic times! Everyone was so happy it was a pleasure to walk around the city! Big hurray for football and for thismonogram LV case-probably the only monogram that i will ever like because it carries our cup! 🙂

Congrats goes out to Spain. Way to go!! Enjoy your victory and the LV case. You deserve them. 🙂

there’s a secret compartment inside! :O :))

Congratulations to Spain. This is a very classy case indeed. Sigh….

ohhh! no wonder Paris Hilton was in South Africa smoking pot with all her LV luggage… nice tie in!

Congratulations to Spain! 🙂 They deserved to win. 🙂
(I would have loved it if Germany had won the World Cup, since I am from there, but Spain had the better team and they played fantastic.) 🙂
The LV carrying case is so lovely! 🙂

Congrats to Spain, they deserved the victory. Louis Vuitton ‘s trophy carrying case is a good advertisement. Good for Louis!

Japanese pop star Utada Hikaru commissioned LV to create a carrying case for her giant stuffed bear a few years ago. When she tours, the bear travels in the LV suitcase with her.